Also won a Twitter contest, so I'll be getting the Lego Dimensions 2016 set for FREE on release day. BOOM!

Now I actually have to buy the game I guess, lol.
Kingpin liked this
Like The Buffalo Ghostbusters on Facebook!

Hope you find a sturdy foot hold before you slide down the rabbit hole and end up buying WAY more additional sets than you planned.

Also I got these in today also from wildcardtoys.com

By KasonM -  July 16th, 2016, 2:01 pm - Posts: 6
-  July 16th, 2016, 2:01 pm #4871969
I noticed the different Holtzman mini figs on Lego.com when I was looking to buy the new set. If you look at the individual pics they show both versions. Not sure why the change. I personally think the version with the goggles looks better. Hopefully the dimension set with Abby stays relevant and we get more expansions.

My goals were to create an accurate LEGO sized version of the NEY York Hook and Ladder 8 replica. My second idea was to try and fit the entire film rooms from the Firehouse 23. I know that the film used a wide angle lens to make the interior of the LA firehouse appear much shorter than the actual location.

Hook and Ladder 8 is about 75 feet long, the Firehouse 23 is 110 ft long. Both are about 26-27 feet wide so what I decided to do is create rooms that were about 10-15% shorter than depicted on film or based on the actual floorpans in the Firehouse 23.

The following layout is based on Ghostbusters 2. I felt that they showed the most rooms in the LA location, minus the bedroom on the second floor. The one thing I wanted to use was the Captain's quarters on the third floor from the LA location on my floor plan. It was only used as filming the birthday party as if it was another house, but frankly I love the architecture and wood panel work. I also kept the fireplaces in both the captains quarters as well as in the 2nd floor bedroom. I changed the captains quarters into a game room since I assume they would have moved all the arcade machines into 1 place since the first film.

Back side:
Based on NYC location. Only changes on my set verses the actual NYC firehouse, the huge bay windows on the far side of the building, which I needed to change in order to fit the darkroom in it.

I bought the LEGO firehouse around Christmas and printed out a list of all the parts needed to construct it via rebrickable.com and the LDD parts list generator. Right now I need to sort out all the parts I have and determine what is left. I buy bulk pieces when I can, but that means nothing until I finalize my need list.

The set is roughly 11,000 pieces to build. Its 26 studs wide by 74 studs long. Its large, approximately over 2 times longer than the official LEGO set.

Fun fact, Like the movie, the doors swing inside the front outward, whereas the set has it swing inside. I have yet to see a version by any other designer who built a custom firehouse with accurate swinging doors. I got praises from several people who built their own version in the past acknowledging the fact that the way I did my set was impressive with the doors working like the film, even though it takes up 8 studs to do it. This is why they never did it, you lose space on the interior.

I have reconstructed the Ecto-1 as well from the ground up. There is a person who goes by the name flailx on the eurobrick.com forums who made a great mod to the official LEGO Ideas set last summer, but I never felt that the roof rack was accurate enough. He built his entirely out of LEGOS and I found some pieces by Brickarms (U-Clips and Monopods) and Brick Trains (who build 3d printed ladders for LEGO trains). Though I wish the Brick Trains Ladder on the side of my Ecto-1 was made the same way as regular LEGO, I am fine with how it looks when you see the set combined with my changes.

Here are some of the mods
Roof Rack: 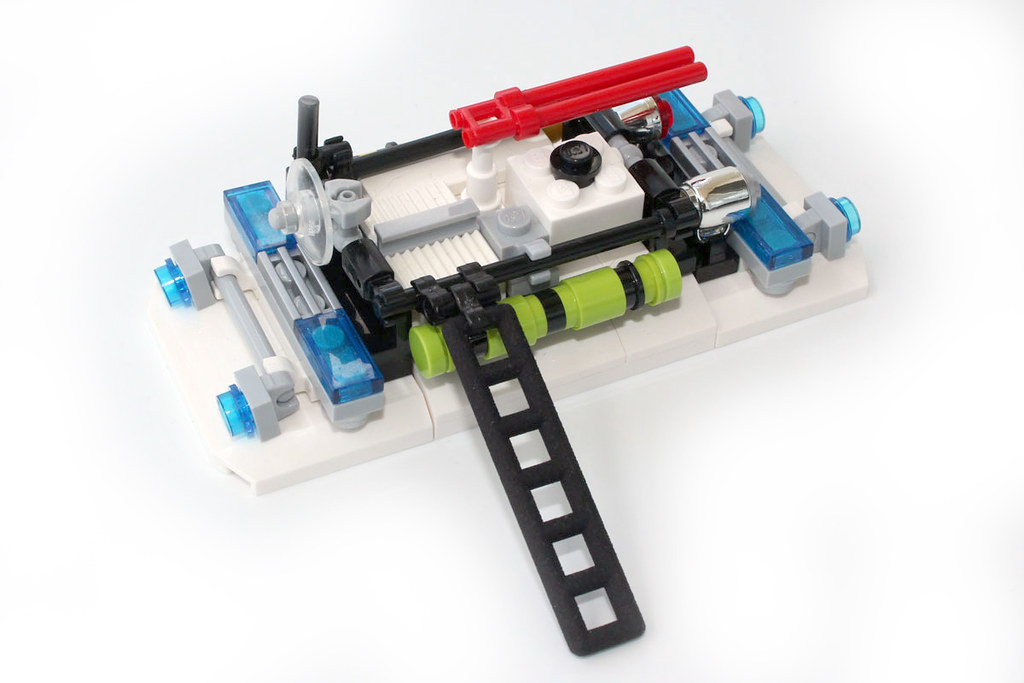 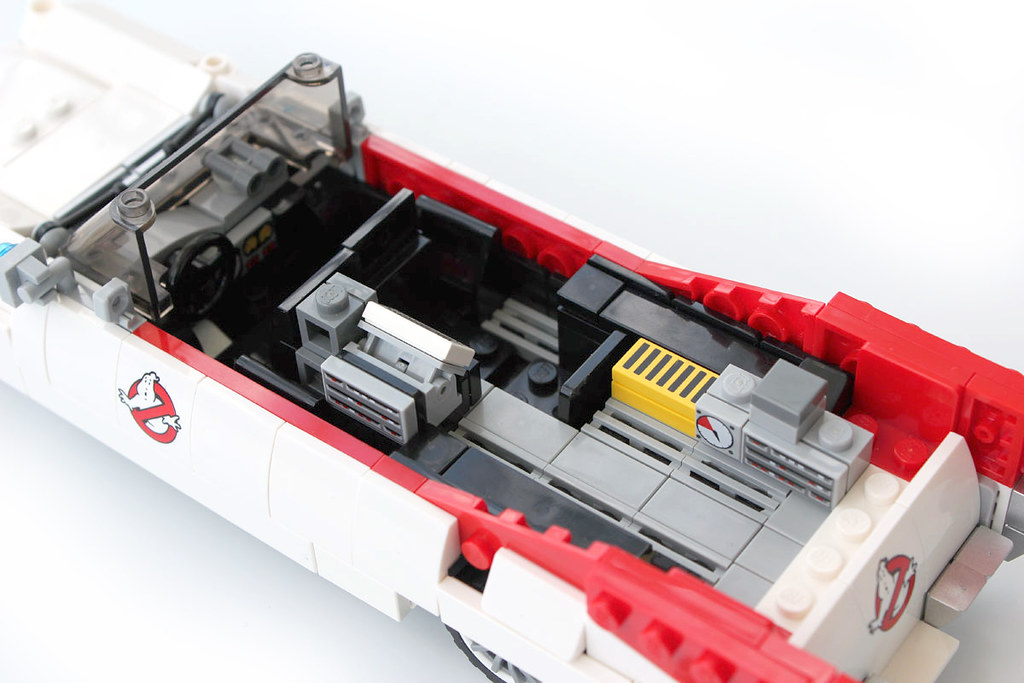 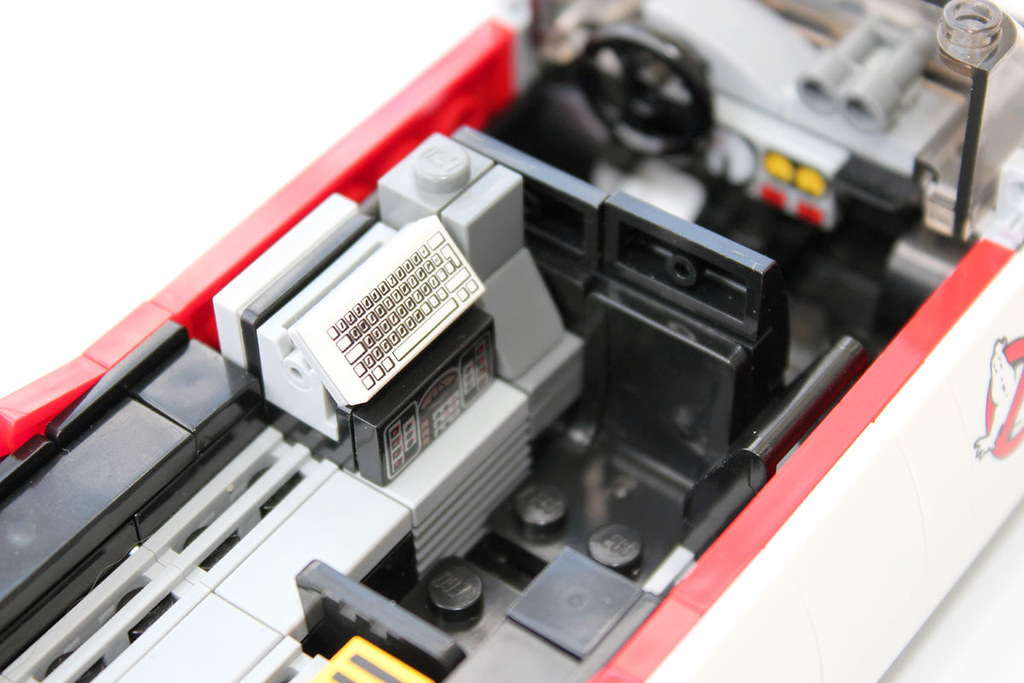 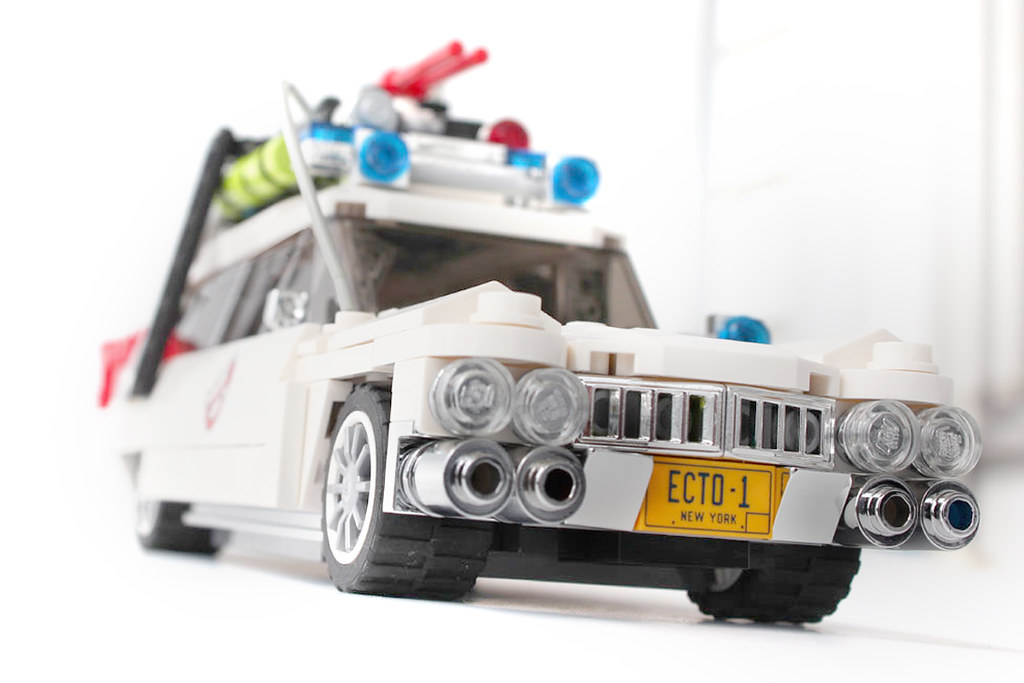 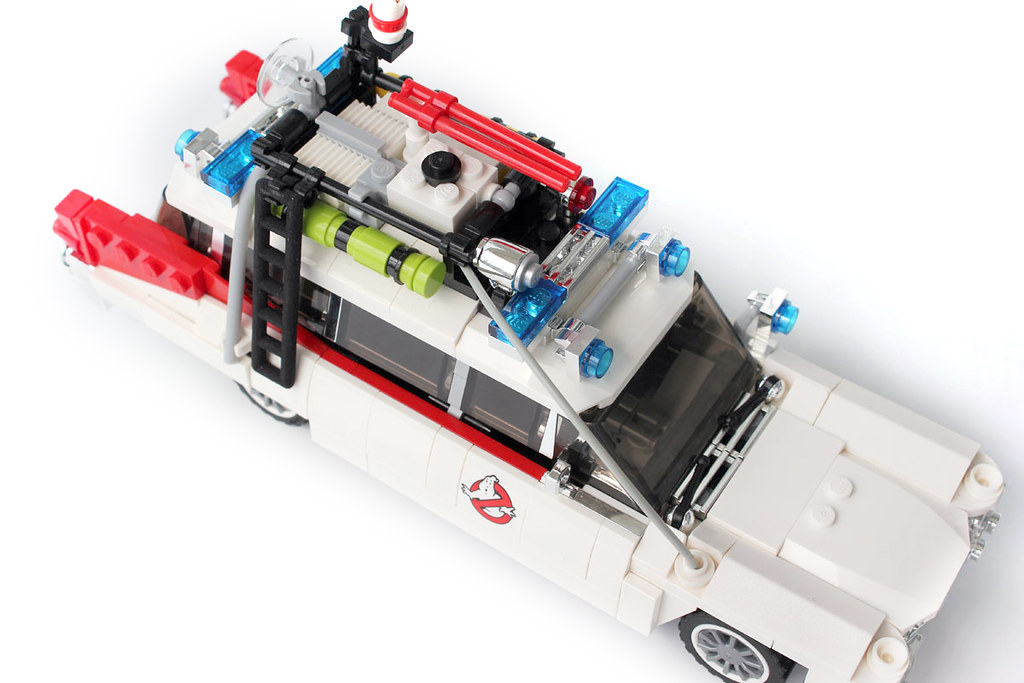 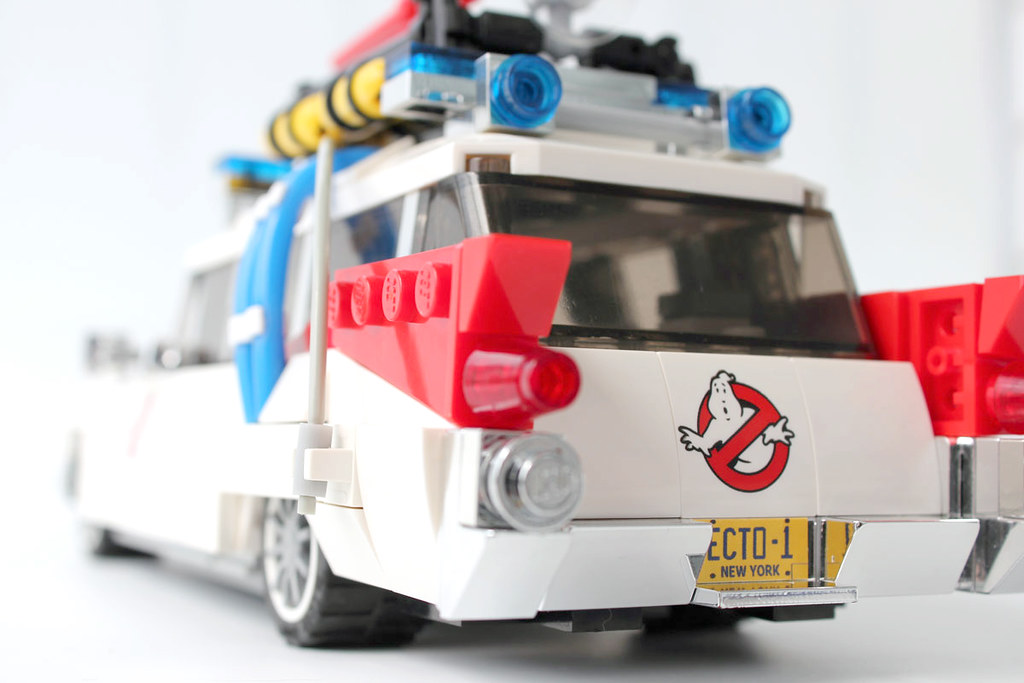 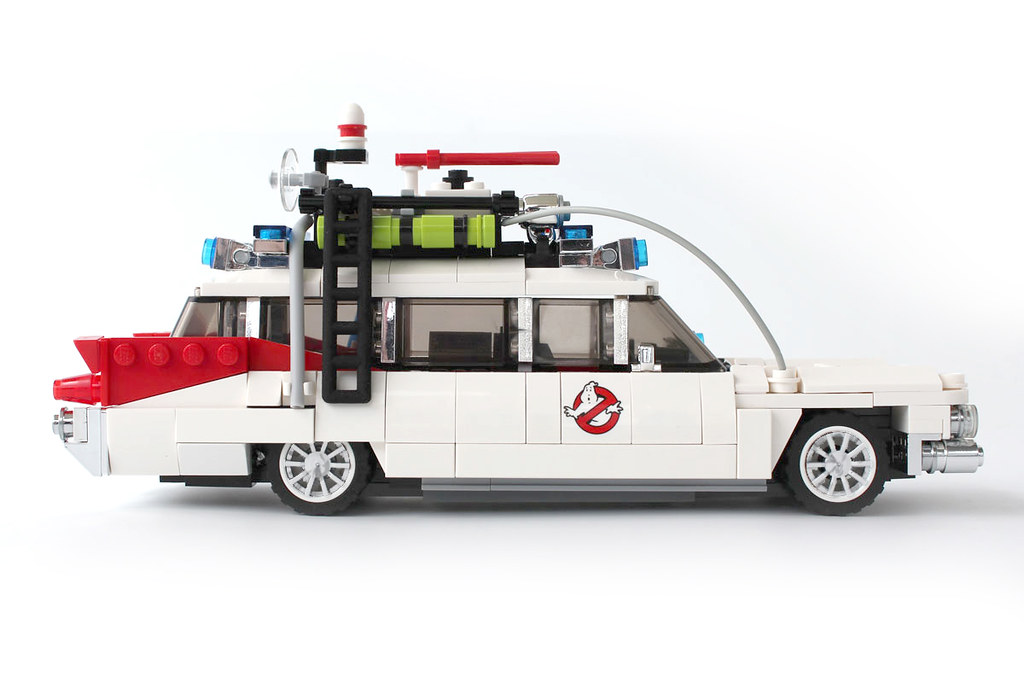 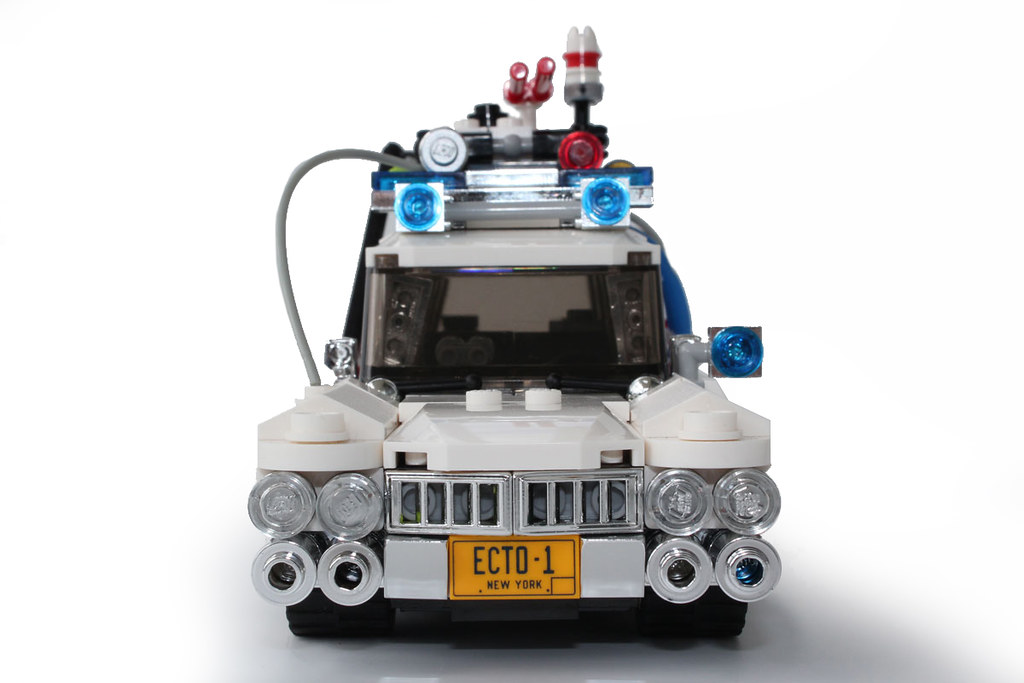 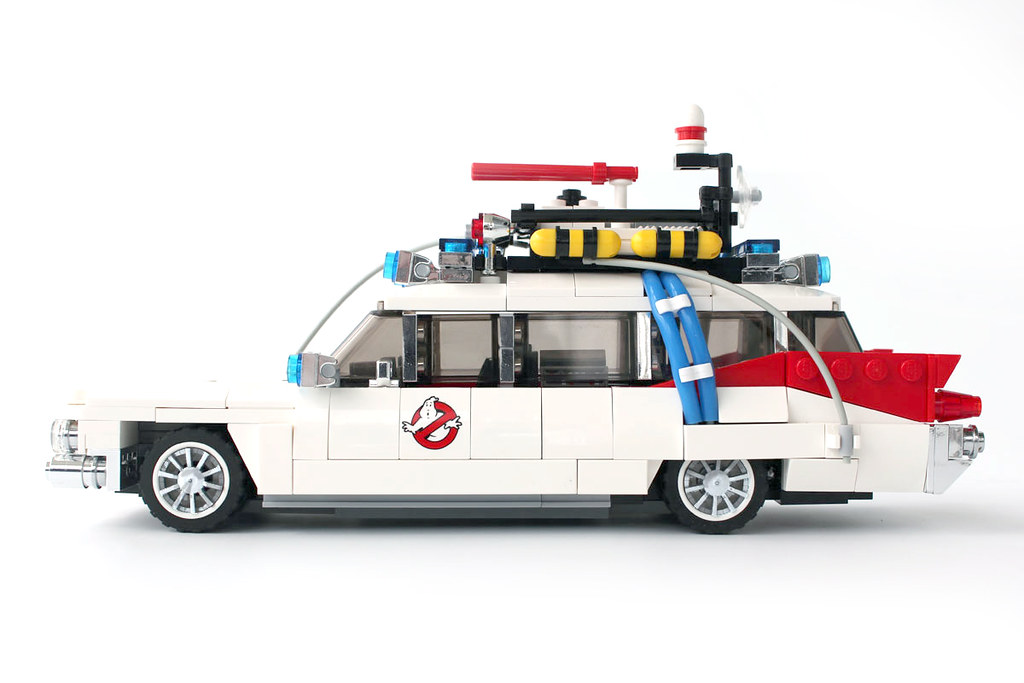 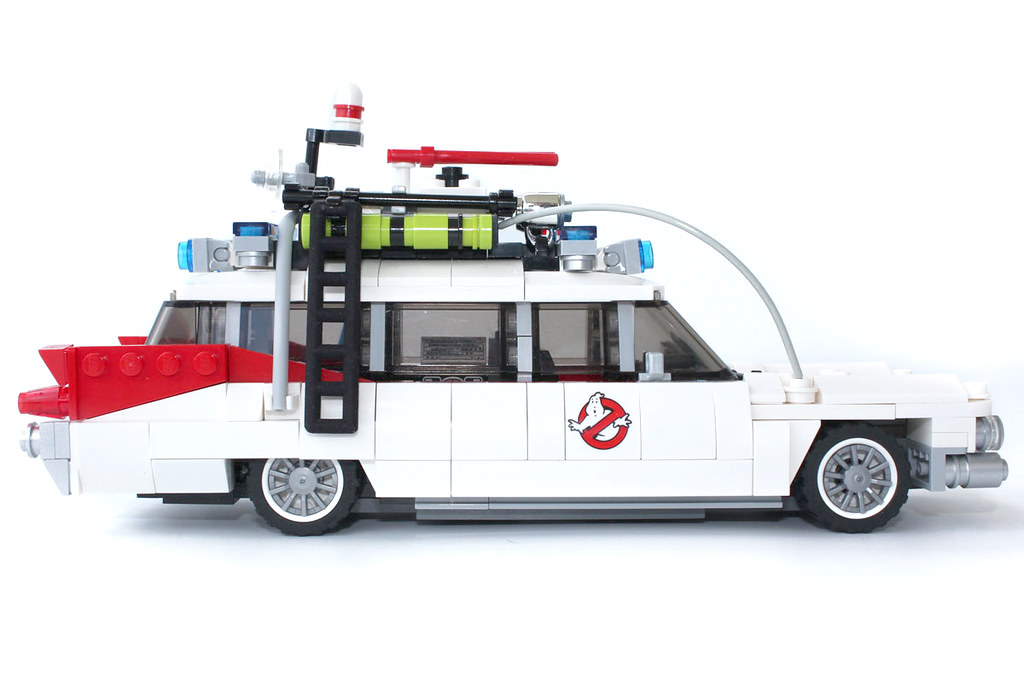 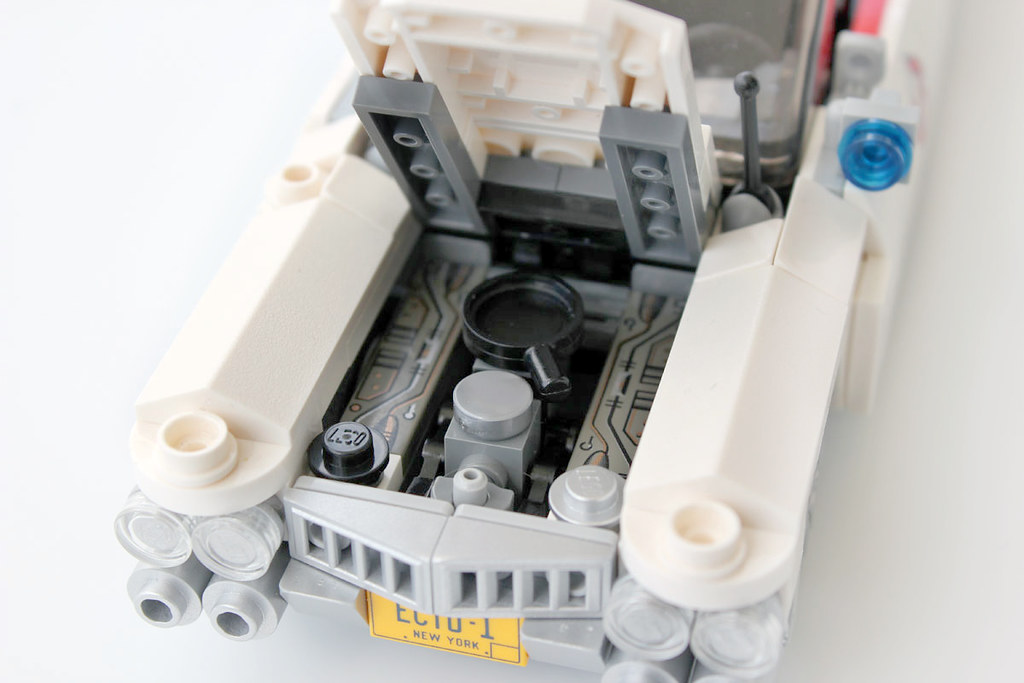 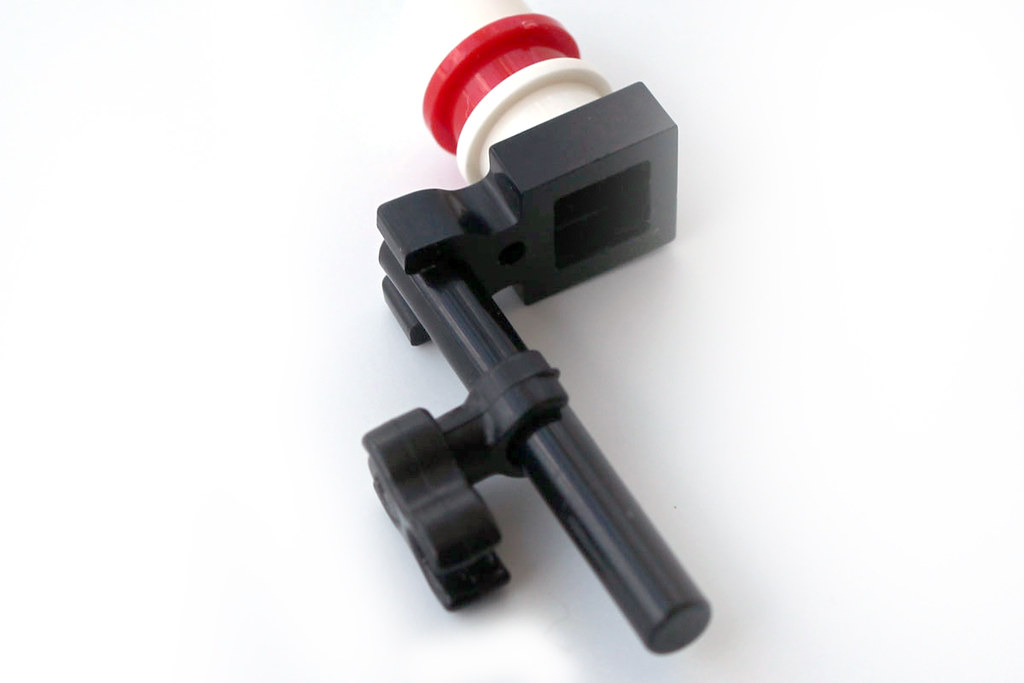 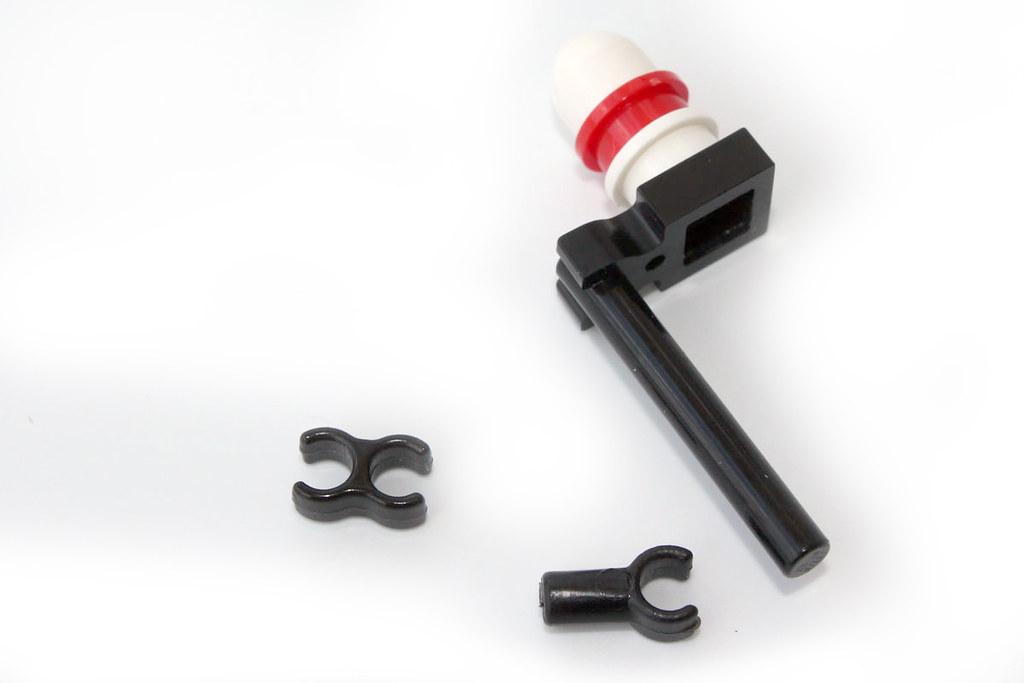 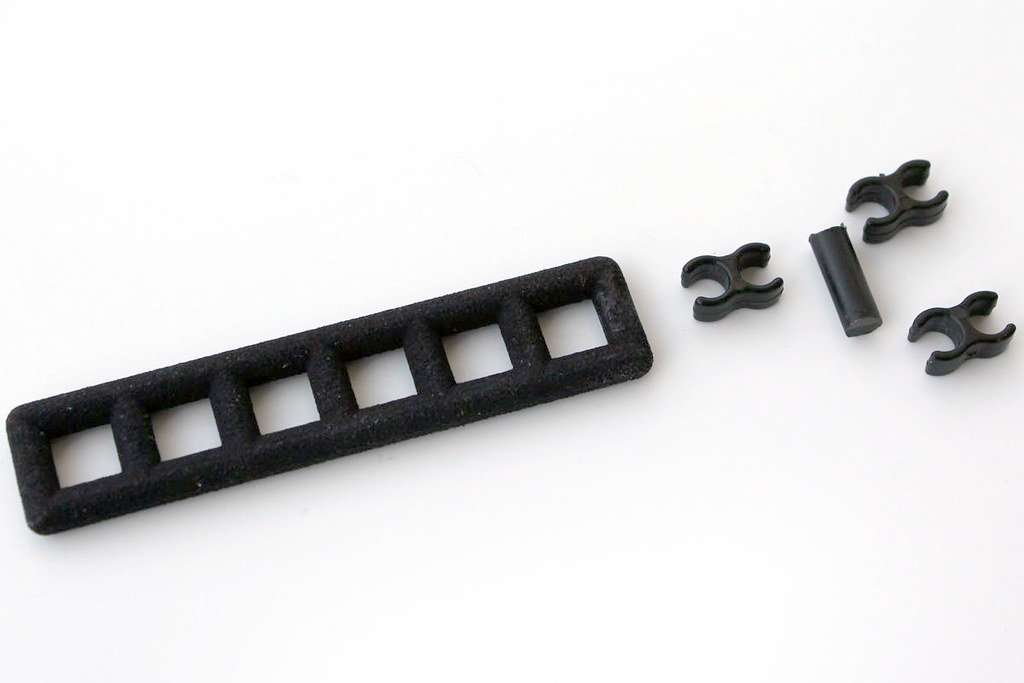 Alex
Sav C liked this
What a knockabout of pure fun that was!

Alex
GabOchoa, Wafflerobot liked this
What a knockabout of pure fun that was!

It kinda felt like that's what the Lego designers had in mind.

I posted the Lego mini-Amigos on FB and a pal commented, "Would you say I have a plethora of Legos?"

Not sure who did it but the photo is by Ghostbusters of New Hampshire, found on Facebook.

Alex
below_radar_00, Kingpin liked this
What a knockabout of pure fun that was!

Meanwhile, I've got some pretty cool stuff cooking up over here... you could even say it's some kinda next level stuff... (to be revealed soon)
What would Ryan do?

I am definitely down with that.

I couldn't brick layer the dark red bricks because I only had 2x1 and 6x1 in that color. There were a couple of structural parts I couldn't replace, thus the brown hinges, gray technic ends, and a few other off colors.

The wall next to the fire escape was pretty easy to fix. Everything moved forward one stud.

The other side took more work. The kitchen shelves were shortened, the 3rd floor tiles were moved over, and the 3rd floor has a corner by the desk behind Egon where there was not one before.

I added 6 light bluish grey swivel bricks to the back wall to make the color more consistent and add stability.

I realize these were posted in January, but I'm just reading this thread and I'd like to do the same to my fire house cause I'm not a big fan of how the back wall looks. So I'm curious as to how difficult this is to achieve? And is there possibly a tutorial how to do it?
"Sometimes sh*t happens, someone has to deal with it, and who you gonna call?!" - Dr. Peter Venkman

The basics of it are to move the existing back wall forward one stud and then build the exterior back wall out of light bluish gray and dark red bricks. I deconstructed the back exterior corners to create a brick layered look around the corner.

The hard part is making the interior look right. I'll leave that for you to figure out for now.
That's what she said.

I had a lot of extra bricks of the right colors from my moc firehouse facade, so I just monkeyed around with it until I liked it, so I didn't make a tutorial as I went.

The basics of it are to move the existing back wall forward one stud and then build the exterior back wall out of light bluish gray and dark red bricks. I deconstructed the back exterior corners to create a brick layered look around the corner.

The hard part is making the interior look right. I'll leave that for you to figure out for now.

Ok then, thanks. I guess I'll take a trip to the Lego store and see if I can't get some bricks that match colour with the bricks that came with the set.
"Sometimes sh*t happens, someone has to deal with it, and who you gonna call?!" - Dr. Peter Venkman

Anyway, I wasn't happy with the Mayhem figure that came with the GB16 set, it's too small and doesn't look too much like the ghost in film (I know lego has it's limitations but come on...) By far for me the most interesting ghost in the new film was the stilt ghost, just the design and look of it seemed fresh and quintessentially ghostbusters, I knew I had to have one, and here he is

He's got 23 points of articulation so he got lots of potential for posing. 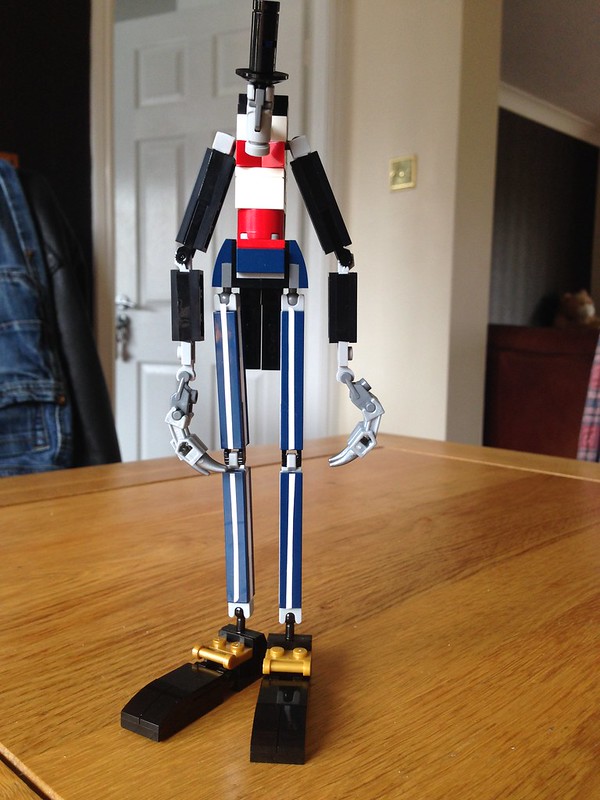 His head? A minifig stud shooter 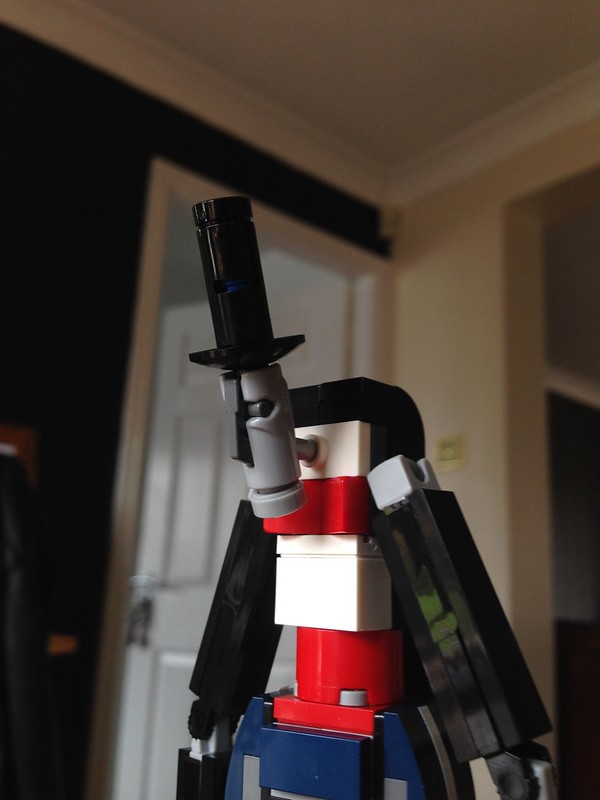 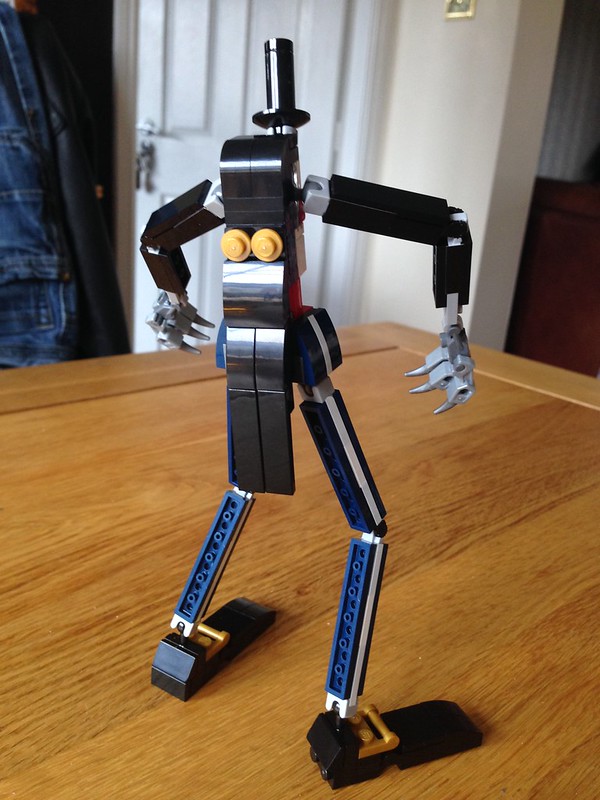 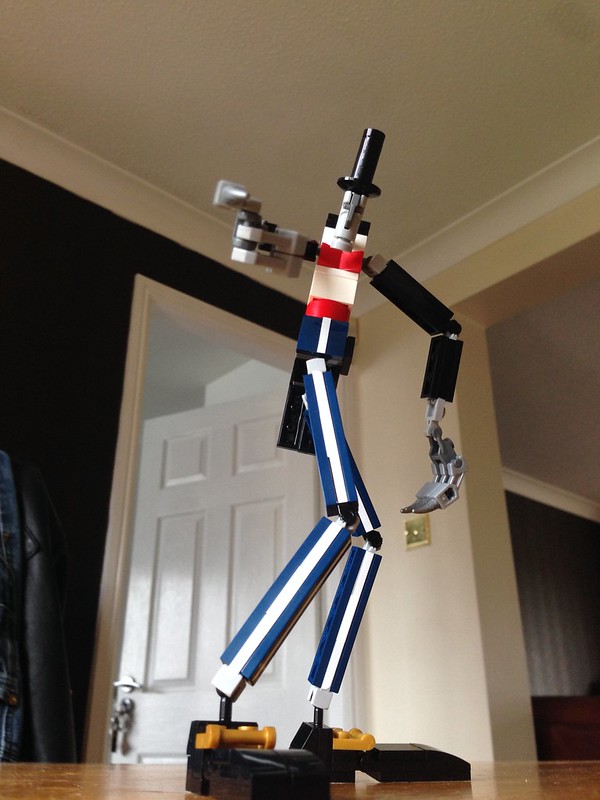 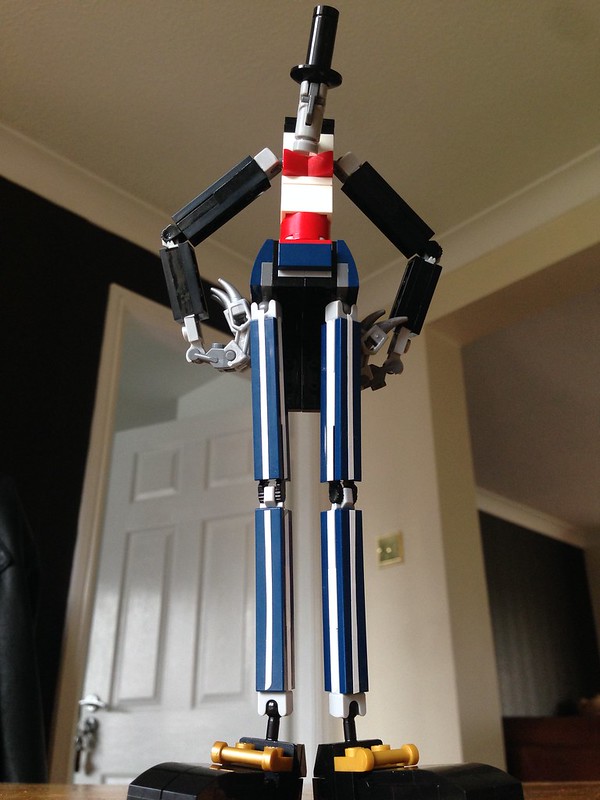 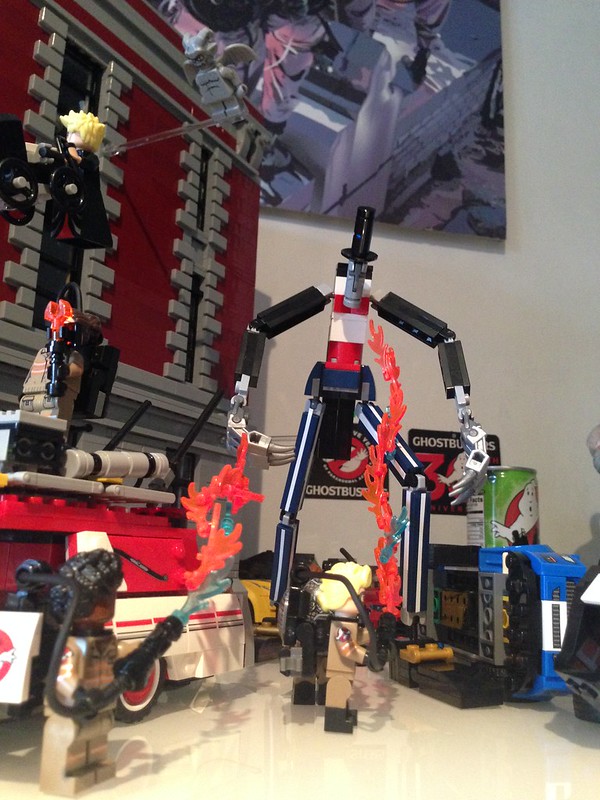 I also wanted a Janosz for my display, Janosz as the Nanny Ghost is my earliest memory of Ghostbusters, I was 3 and ran out of the cinema seeing it, it creeped me out so much. So naturally, I had to have him in lego too 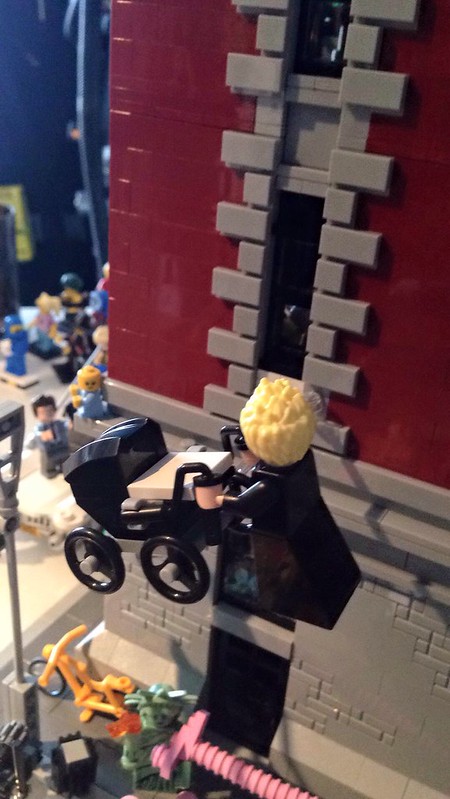 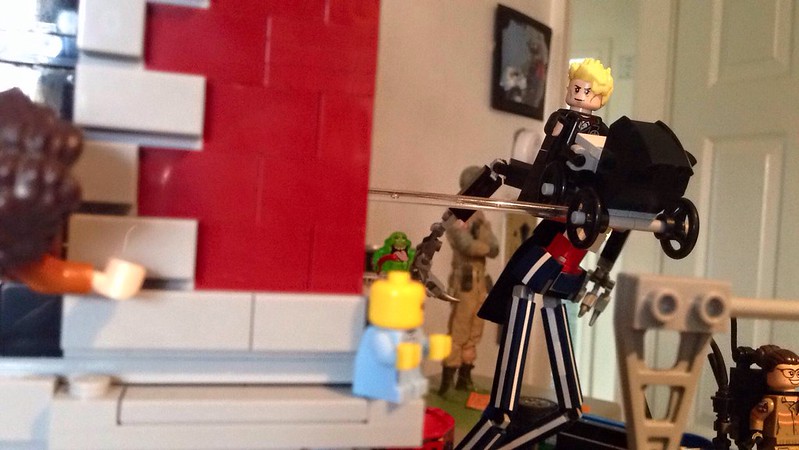 I also finished my Library Ray, save for some flesh hands. I picked up a custom green trenchcoat cloth and trimmed it down some, pretty happy with the results 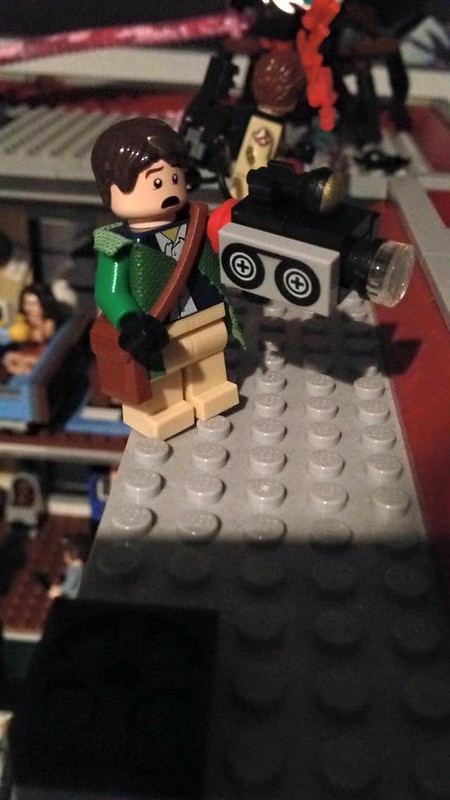 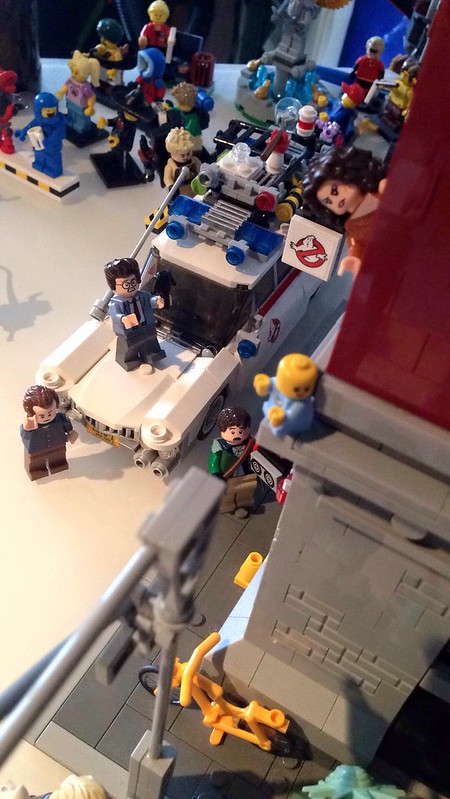 Also, with my pot of spare bits, I made a couple of tripod traps, plan on making two more and using string elements rather than the whips for the cables 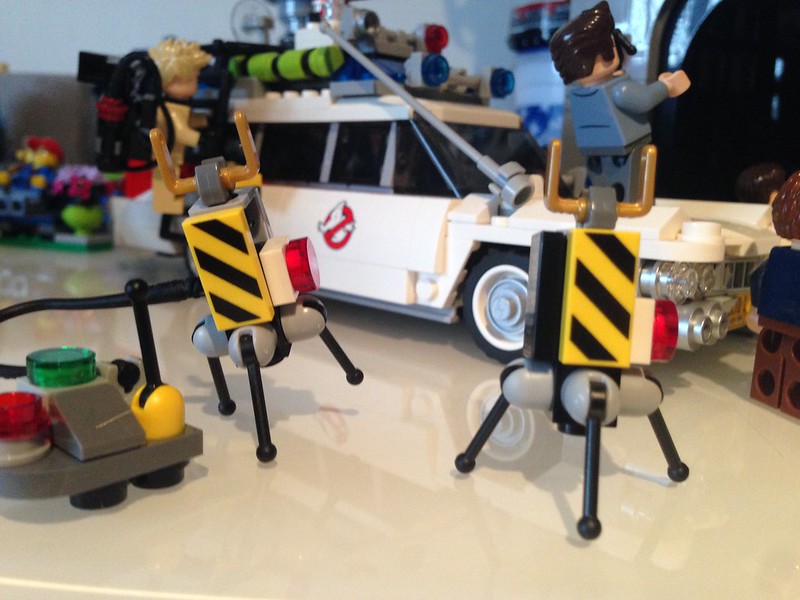 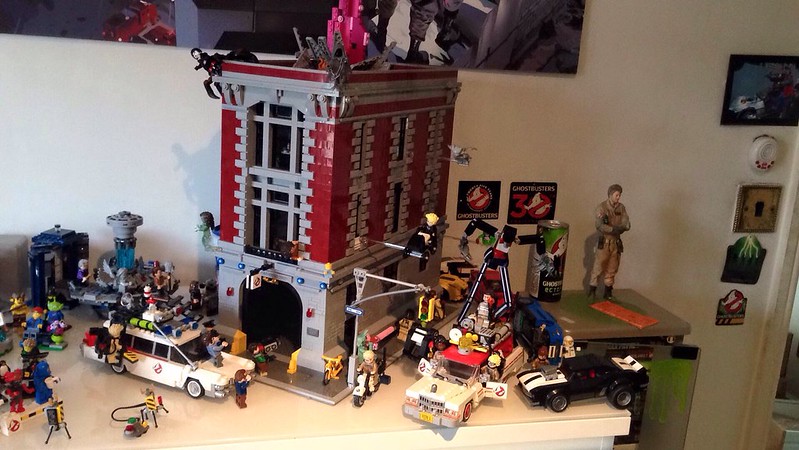 Untitled by Bob Wobbaz, on Flickr
Kingpin, barison82 liked this
You did not use...the magic word.... 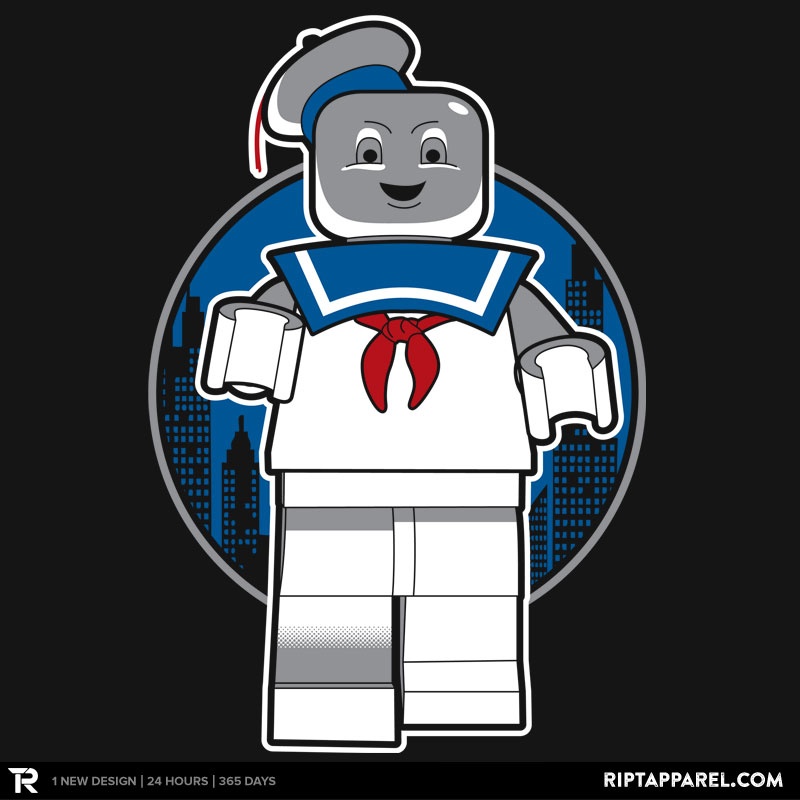 Mini Marshmallow Man
What would Ryan do?

By barison82 -  July 6th, 2017, 5:53 pm - Posts: 487
-  July 6th, 2017, 5:53 pm #4895319
Well I've got to say that after reading all this and seeing all these awesome pics, I've been bitten by the Lego bug again...I didn't pay much attention to all these Ghostbusters sets at first as I haven't bought any Lego since I was 16 lol. Didn't see myself getting back into it at all! I still actually have some of my old sets (including a big Airport Shuttle one) but these sets are mindblowing - I didn't realise how truly amazing they are

I've gone and got hold of Ecto 1, the Firehouse (cannot believe how big and heavy this set is) and some Dimensions sets, plus some extra figures and parts to customize. I've been excited about this all week! Crazy.

I'm definitely never growing up after this.
Kingpin liked this
"...but if we're right, and we can stop this thing...then Lenny, you'll have saved the lives of MILLIONS of registered voters" - Dr. Peter Venkman

I'm definitely never growing up after this.

Welcome to the club, mate.

barison82 liked this
What would Ryan do?

Welcome to the club, mate.

I'm making a start on Ecto 1 this weekend, Firehouse to follow shortly. Can't wait to recreate some classic scenes - the containment unit shutdown is one of them. Imagine doing a Lego build of the Sedgewick ballroom - now there's an idea!

Getting carried away here...
Kingpin liked this
"...but if we're right, and we can stop this thing...then Lenny, you'll have saved the lives of MILLIONS of registered voters" - Dr. Peter Venkman

Always something new and amazing to be discovered.

Probably not the first to notice this, but in the […]

I got the first of my pre-order today, Stay Puft[…]

Ok, cool. That may be beyond my capabilities but s[…]