By katkitty24 -  August 19th, 2017, 6:10 pm - Posts: 8
-  August 19th, 2017, 6:10 pm #4897205
Hey everyone!
My boyfriend is a massive Ghostbusters fan and LEGO enthusiast and has just finished his own custom ECTO-1A, complete with Ghostbusters 2 minifigures and made a video about it. Check it out and let us know what you think! https://youtu.be/SX93rqYegWo
He loved working on it and has lots of ideas for other custom projects. I showed him some of the stuff on here and he loved it!

Not sure if this is the right place but LEGO have just revealed the release of a Slimer and Venkman BrickHeadz pack
https://www.facebook.com/LEGO/photos/a. ... =3&theater

Yep, this is most definitely the place to post that.

I looked it up on Bricklink, and discovered it's part #35032d, "Power Burst Bolt Spiral With Bar Ends".

Also available, as luck would have it, in trans-orange.

Alex
Kingpin, Sallah liked this
What a knockabout of pure fun that was!

I saw in a review where they were a LOT of bricks for a decent price... and then I saw them marked down for even less. They were something like three cents per brick.

I shot this video...

... where I talked about making a Louis and a Zuul, and ideas for making heads of Egon, Winston, and Ray to eventually put on extra Venkman bodies. (As of yet, I have not seen the Venkman set in stores.)

Then after I shot that video, I decided to get a couple more sets. I realized that even though I couldn't make flightsuits and proton packs, I could at least make SOME kind of bodies for the others.

Granted, I poured out all three sets onto the table, so you can't necessarily make these guys unless you also buy three sets, but it was a lot of fun and I still have tons of bricks left over.

This was the second 'shirt' for Winston. I previously had him in alternating white and purple. Ick. Also notice Egon's lab coat has a tail.

Ray's goggles have a strap that goes all the way around. I may redo Stay-Puft's bib to make it longer in the back.

Of course, I can improve all of these if I use additional bricks from my spares, or order some from Bricklink, but I just wanted to demonstrate some possible Ghostbusters ideas that can be made just with the Go Brick Me sets.

Wonder Woman also had some dark blue plates that allowed me to tweak Stay-Puft's bib, though I had to haul out my loose bricks stores for the red and white 1x1 plates for the front ribbon. I also dug out some parts to fashion a PKE Meter for Egon.

I also used some of the loose bricks from my older sets to make better goggle tubes for Ray, and re-did his torso front and back with two 1x4 bricks each, instead of stacks of six thicknesses of plates. I tried putting the tubes on the outer studs, directly above the eyes, but they looked like devil horns when I did that. Expect yet another re-design down the line.

Winston's hair has also been improved following one of the recipes in the Go Brick Me suggestion guide. This was done entirely with the leftover Go Brick Me set pieces. 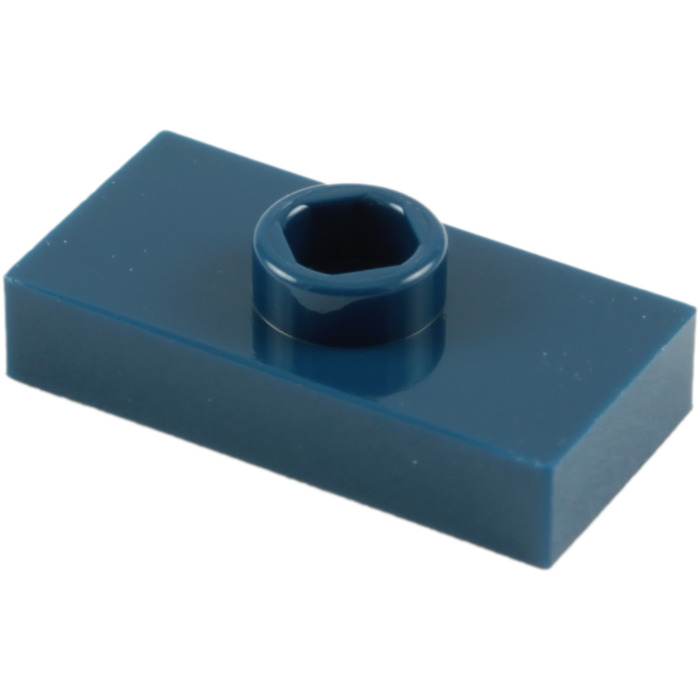 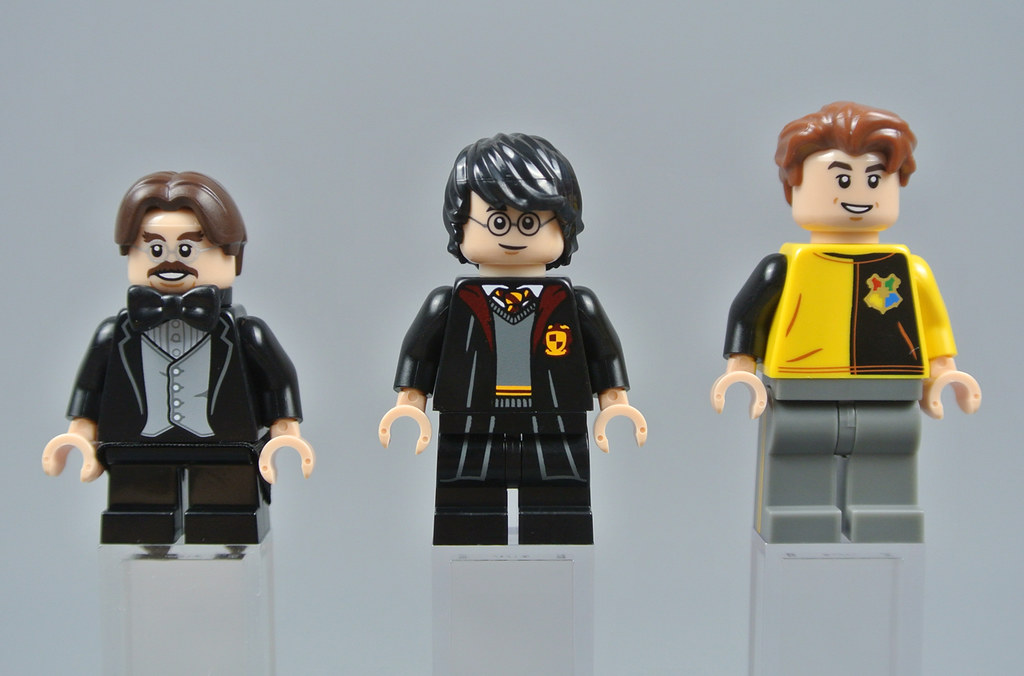 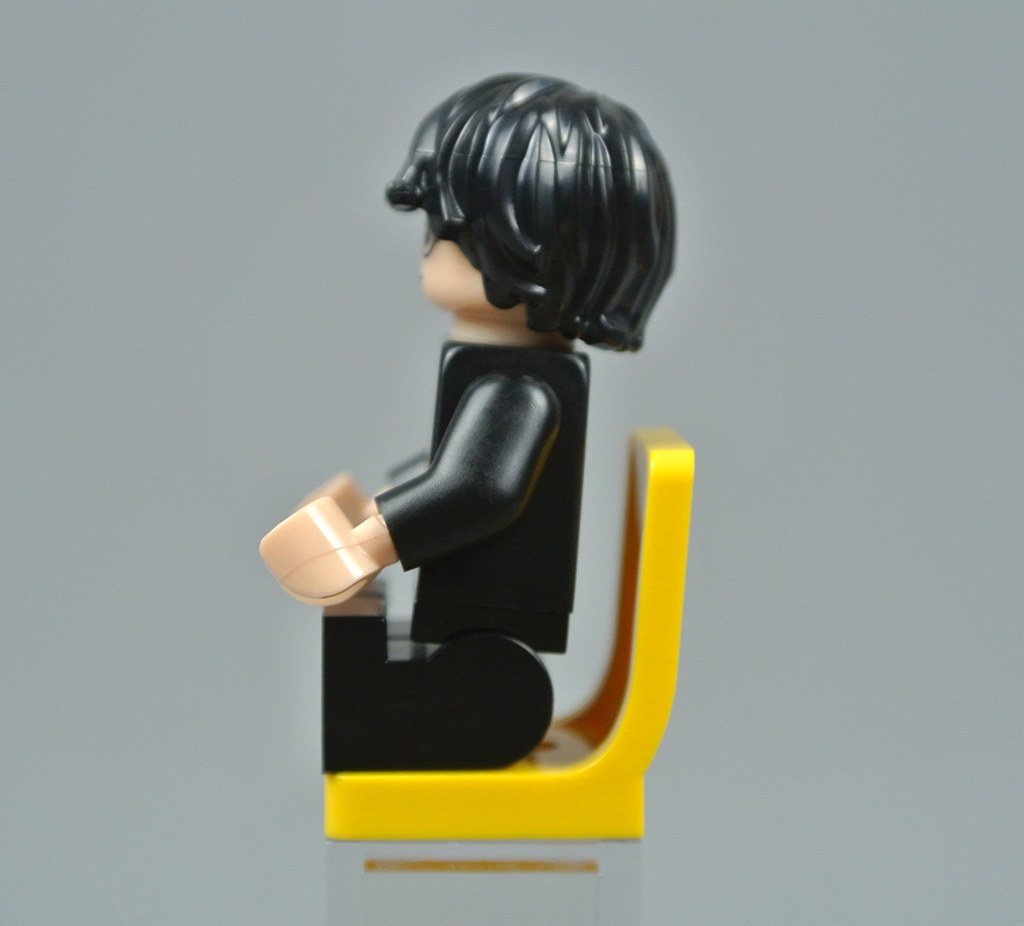 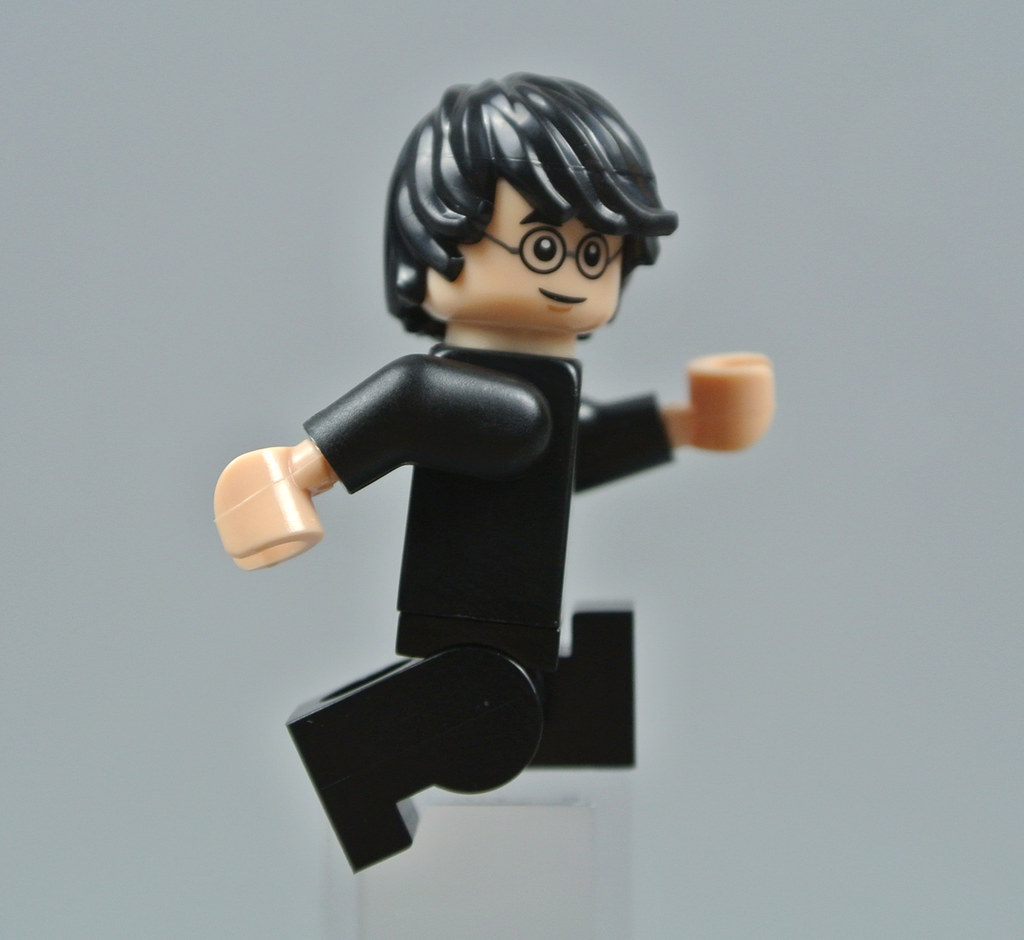 Personally, I can't wait to find these in solid colors in the future.

I always thought the official Louis Tully Lego minifig was too tall, standing the same height as the GBs and other characters... 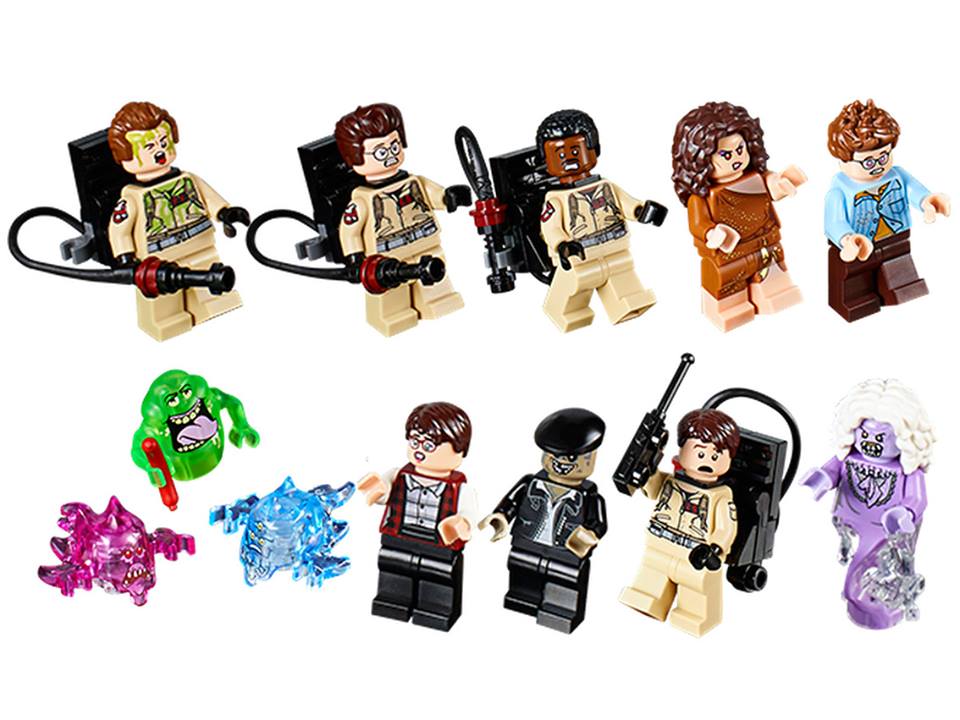 ... but then again the custom 'BrickinIt' Vince figure was too short with the non-poseable tiny legs.

Mid-sized legs would be ideal for Louis. Possibly for my MOC mayor Lenny as well.

Also of note in the Harry Potter set, they have a new brick for 'skirts' instead of just using a sloped roof piece anymore.

I hope these become the norm as well. I'd need one in black for my MOC Archbishop from the Mayor's Office scene.

Need some brown ones still for Louis Tully, but I'm sure it's just a matter of time.

On Facebook this past week, Nick Giordano posted pics of a particular 'trans-blue' brick from an Infinity War Thor's Weapon Quest set, which he felt had potential as a proton stream.

I looked it up on Bricklink, and discovered it's part #35032d, "Power Burst Bolt Spiral With Bar Ends".

Thanks for the tip Alex! Just ordered some of the orange ones.

-James
To check out our reviews, head to http://www.ActionFeatures.net or http://www.youtube.com/MOTUClassics

I just shot a quick video about the new Wizarding World CMFs as well.

By Alex Newborn -  August 9th, 2018, 3:31 pm - Posts: 2533
-  August 9th, 2018, 3:31 pm #4907501
A few days ago, my nephew who lives in Astoria, NY-- and works in NYC-- was visiting the Lego Store near the Flatiron Building, or as he put it "the closest Lego Store to the Firehouse". He said he saw the shelf tag for the Venkman/Slimer Brick Headz set, but no actual sets were in evidence there. He asked an employee who consulted the computer and said there should be one more left, somewhere in the store.

Then he spotted it in a very fitting location... underneath the giant hand/torch of the Statue of Liberty.

So he bought it, wrapped it up like a ghost trap, and mailed it to me as a surprise.

But I liked the GB BrickHeadz that my nephew got me so much, I ordered three more sets from Lego Shop-At-Home so I could have all four guys with proton packs simultaneously.

Note that Venkman's pants legs are now longer than everyone else's.

I also modified Egon and Ray so they have sideburns now. Winston already had sideburns, but he and Ray did undergo slight revisions to the nape of their necks, to leave clearance for the proton packs.

Ray's goggles are still not quite what I want. I've got some pieces from Bricklink on order at the moment.

All four proton guns have the silverish 'knobs' added to hide the fact you can see through to the other side otherwise.

Next step will be to scan the torso fronts, tweak the designs, and print custom labels.

Scanned in the two 1x4 decorated bricks that make up Venkman's torso, and retouched it to remove the slime.

Then I did alternate name tapes for the other characters.

I did a test print here at home, but the colors aren't great. Need to take the files to a print shop for better results.

-  February 14th, 2019, 8:16 am #4914121
Whilst it isn't a new set of Ghostbusters sets, LEGO have recently announced "Hidden Side", a series of monster/ghost-themed sets which could go well with the past Scooby Doo sets, as well as provide expansion opportunities for the Ghostbusters sets.
What would Ryan do?

I like the little sheet-wearing ghost dog. Made me think of Zero from Nightmare Before Christmas.

I think that might just be a normal dog, rather than a ghost dog.
What would Ryan do?

The new deco looks more like the Gozer design from Lego Dimensions; if you want to nudge it even closer, you can swap out the included hair for a 'flattop' hair.

For info on ordering: https://www.brickinit.com.au/product/destructor

I don't know if they also plan to revisit 'Zooly' or 'Vince' (unlikely, since Lego has since made those as minifigs).

I hope so, their first effort was a major let-down.
What would Ryan do?

Plus, I'd actually already made my own Vigo from existing parts.

Can't recall the exact recipe at the moment, but here are some pics...

I wonder where I put that guy? Have to dig around see if I can locate him.

-  May 11th, 2019, 2:20 pm #4917902
Meanwhile, there's going to be a Statue of Liberty Brickheadz coming out in the near future, perfect for those who wish to expand their Ghostbusters collections while we wait to see if Egon, Ray and Winston might get a release:

Definite room for improvement, those uncovered studs will need to be tiled over, and I'm surprised they didn't reuse the printed tablet from the minifigure version of Liberty. I'm also disappointed they didn't bother with a sand green 'Plate 1x4 with two studs' on the face, or green eyes (though I might grab the eyes from Ninjago Lloyd, or just use a couple of sand green 1x1 round tiles)

I'm hoping to make a Brickheadz-style pedestal for the statue.
What would Ryan do?

Here's another idea... Get this set for the characters' heads, get some extra medium-height poseable tan legs (like Dustin has here), and then take your Lego proton packs, traps, and GB torsos (two Venkmans, a Stantz, and a Spengler) and boom, you'll have a nice Lego Stranger Things Season Two set.

Or Janine gets ahold of them if she is indeed the […]

So I've been listening to a recording of this snip[…]

lol no not a pencil sharpener! I used a file clamp[…]