First off, I had a little trouble with sizing for my Tru-spec that I ordered. My first was from Amazon and it was too big and baggy, so I had to send it back. Then I found a better deal thanks to info on this forum and ordered from Sportsman's Guide.

I actually got my new suit before shipping the oversized one back. The first thing I noticed was the variance in color, despite both being tagged as "khaki". 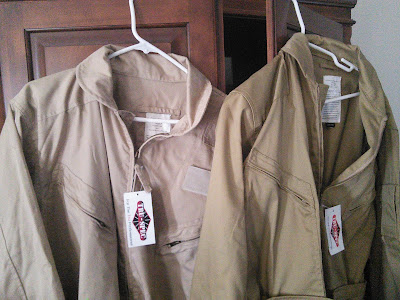 I really didn't want to chance ruining it by trying to dye it, so I figured I would live with it for now. But I need to figure out a way to fix that or just replace it, as standing up next to fellow exterminators with the correct color makes me feel out of place.
ScottDimmick liked this
- Parflagush
[Gush's Humbly Endeavoring Proton Pack Build Thread]
[Gush's Uniform Thread]
[Gush's Giga Meter Build Thread]
_________________________
The GhØstbusters of Salt Lake

By Peterson -  September 7th, 2014, 2:44 pm - Posts: 216
-  September 7th, 2014, 2:44 pm #4808430
Given the variations in "khaki" suit coloring, I wouldn't worry about it too much. Unless you can find a place that sells them locally where you can look at 'em before you buy, your particular shade will be "luck of the draw" unless you want to go the dye route. Dying is pretty intimidating for me too, but it does help that I didn't totally screw up the two swatches I just experimented on this afternoon....

ETA: Incidentally, which suit is the correct size? If I was buying one, I think I'd prefer the lighter color on the left. Though I could live with either one.

By Parflagush -  September 7th, 2014, 2:59 pm - Posts: 287
-  September 7th, 2014, 2:59 pm #4808432
Yeah, that was pretty much my thought and I hoped to live with it, but I ran into some guys at SL Comic Con and the difference was uncomfortably obvious. I'll probably just have make a trip to some local surplus shops and hope I can find something. While they tend to be more expensive, it might be worth it to avoid the embarrassment next time around.

Not to mention, the suit doesn't match my hat (pictures pending).

While they tend to be more expensive,

Not necessarily....I'm pretty sure I've read of people getting some sweet deals at military surplus stores - of course a good bit of luck may be needed to find your size/color.

Not necessarily....I'm pretty sure I've read of people getting some sweet deals at military surplus stores - of course a good bit of luck may be needed to find your size/color.

Well I really only checked briefly at one store. What I found was about $15 more than what I'd pay online with shipping, so I didn't even bother to check the sizes. But I probably won't be around any other GB's until next year's con, so I should have plenty of time to figure it out.
- Parflagush
[Gush's Humbly Endeavoring Proton Pack Build Thread]
[Gush's Uniform Thread]
[Gush's Giga Meter Build Thread]
_________________________
The GhØstbusters of Salt Lake 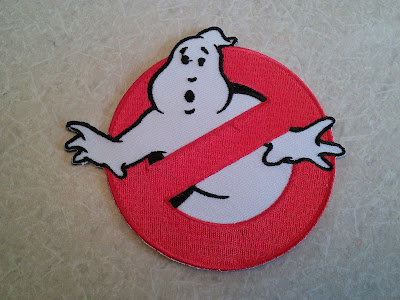 But luckily I was able to pull the stray threads through the back and clip them off to fix the ghost's eye.

I also went around the outside edge of the patch with a permanent marker where the ghost's black outline is to fix the thin white outline in some places.

This patch comes with iron-on backing, but I thought it would be good to sew it on anyway to keep it from coming off. I was lucky that I had a mom who taught me some basic sewing skills as I was growing up. Still, sewing the patch on was a royal pain for my aging hands. 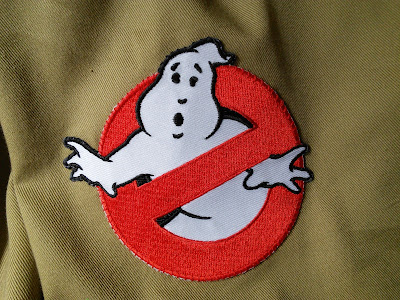 Despite being less accurate, I decided I'd use velcro for the name patch rather than sewing it on. I wanted the option of using my real last name for certain occasions.

I carefully de-stiched the existing velcro where the name patch would go and sewed on a new band of 3" black velcro from Wal-Mart, which was the perfect height for the name patch. 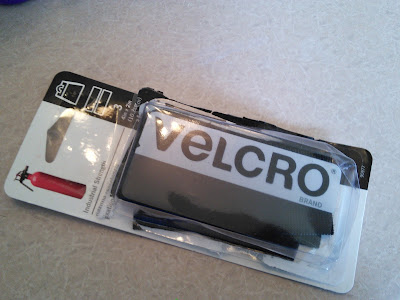 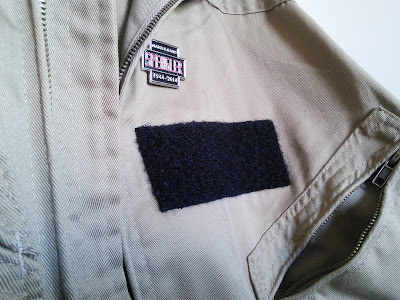 The problem with this velcro is that it comes with an adhesive back. While it helped to keep it in place while I needled it on, the needle often got all gummed up and slowed down the process a bit. If you can find some properly sized velcro without the sticky back, I'd recommend that over this kind.

I got my name patches from katarra8 (before GBFans offered them). I've heard of a few here having some problems, but I have had a really good experience ordering from her. I was especially pleased with the turnaround time. 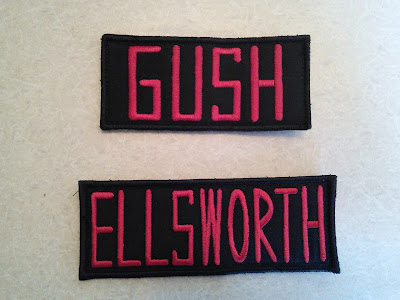 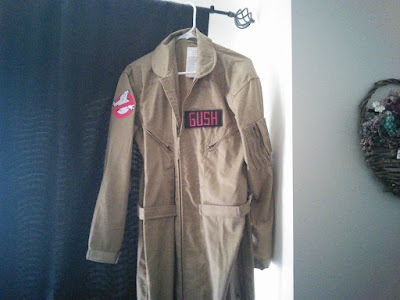 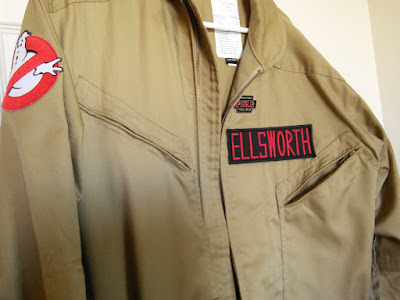 I personally like the GUSH name tag better as it's shorter and fits the available space above the pocket better.

It's also interesting to see how the different lighting in these photos drastically changes the color of the uniform. Maybe I should just wear it in the appropriate light and nobody will notice the color being off.

Need to see some accessories on that!

Got the leg hose connector from Nick-a-tron. I honestly don't remember even checking to see what color was accurate, but he sells a rubber grey one (as well as a brown one) and I liked the grey color and the fact that it was rubber so I bought it and sewed it on. 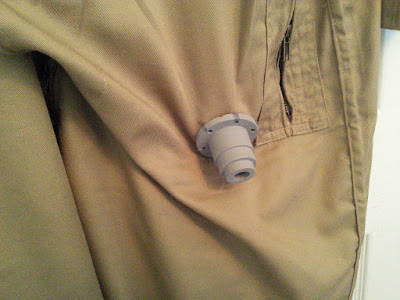 I had a difficult time finding the proper, accurate location for this on the suit. The reference photos from the movie seem to show it at different heights on the different actors from what I can see. I was going cross-eyed from trying to figure it out, so I just placed it to the right of the pocket at the bottom.

And yes, bishopdonmiguel's method for attaching the leg hose with magnets is simple and awesome, so I followed his guide. Thanks, man! 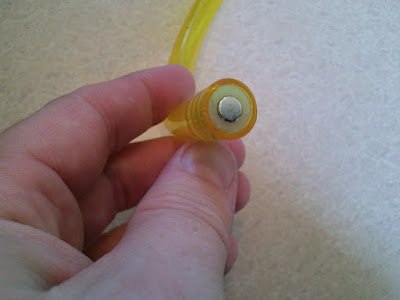 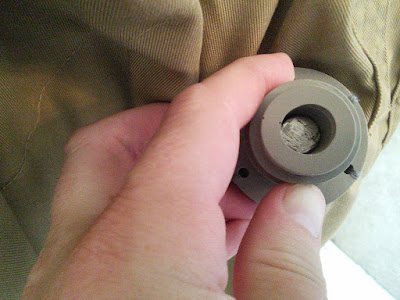 With the leg hose connector being rubber, I used some Amazing Goop glue (which is a little flexible) to get the magnet to stay inside. Also, my local Home Depot didn't have hardly any of those super magnets, so I just ended up ordering those online from Amazon.

And I've decided to start calling the leg hose the "Emergency Relief Hose", or "ERH" for short.

By Parflagush -  September 7th, 2014, 6:57 pm - Posts: 287
-  September 7th, 2014, 6:57 pm #4808469
Most Ghostbusters wear their Ecto Goggles on their head like Dr. Stantz, but I want to look a little different (besides, I don't have a good set of goggles yet). While certainly not a unique GB costume idea, I've seen others wear hats and I like the look. It kind of reminds me of the classic exterminator look...like the Orkin man or something. Most of the hats I could find for sale online aren't quite what I was looking for. I just wanted a plain hat with the no-ghost logo. So I decided to make my own.

I ordered a plain old, khaki-colored ball cap (flexfit) from Amazon, and I ordered a toddler-sized no-ghost patch (katarra8). Sewing it on was a challenge, but I just pinned it in place. The pins weren't as effective as I'd hoped. Maybe safety pins would work better, I don't know. I'm not a pro at this, but after a few holes in my fingers, I managed to get it sewn into place. 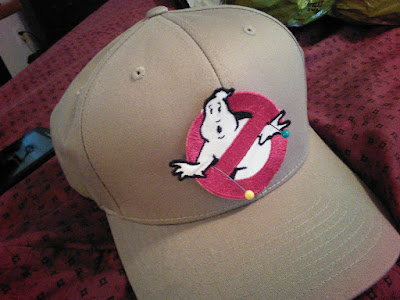 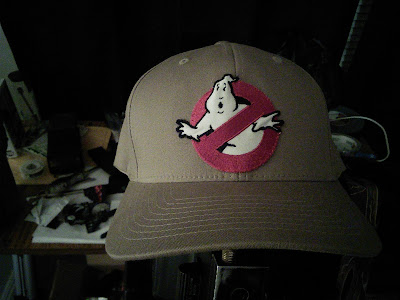 Freaking love how clean your sewing is 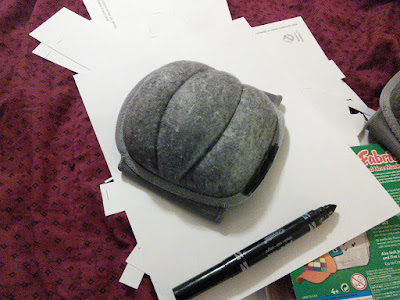 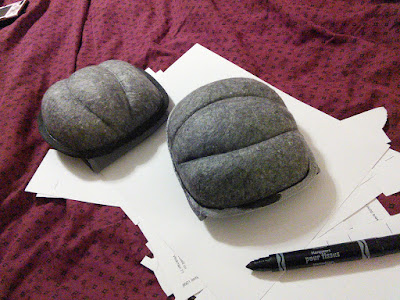 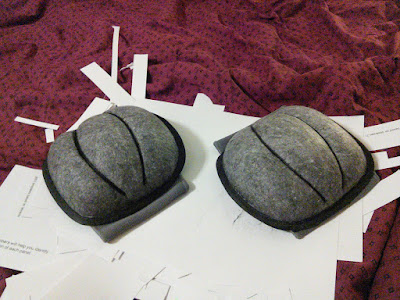 The instructions for the markers say to "heat seal" it on the fabric by putting it in the dryer, but I was a little wary about doing that so I just grabbed a hair dryer and zapped them for a few minutes. I was mostly worried about the color wearing off on my suit, but initial testing indicates it should be just fine.

I cut the Craftsman vinyl label off as it is just sewn on, and it's as simple as that. 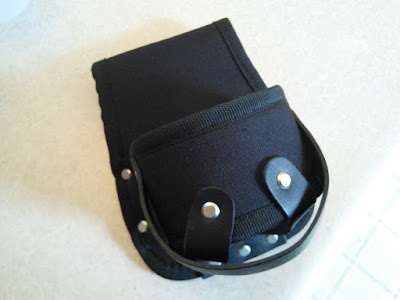 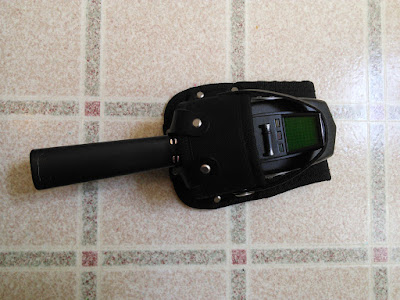 I still need to get the black "patch" that goes on the other side of each of these.

Be sure to select black elastic so it will stretch with the elbow pad material.

By Parflagush -  September 8th, 2014, 9:36 am - Posts: 287
-  September 8th, 2014, 9:36 am #4808546
I used Alan Hawkins' DIY Budget Belt fobs guide to make the fobs for my belt. I forgot to take pictures during the process, but I stayed pretty close to the instructions that he provided (thanks, Alan!) The only difference for me was that the nylon strapping I got was thicker and this prevented me from fastening the snap through the folded part of the strapping. So I just attached the snaps through the front-facing layer only, and then sewed it to the back layer. 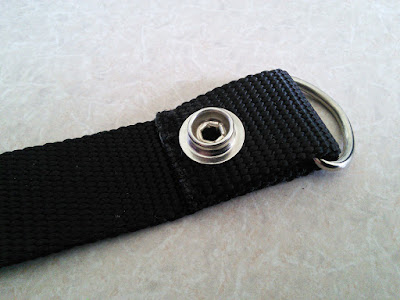 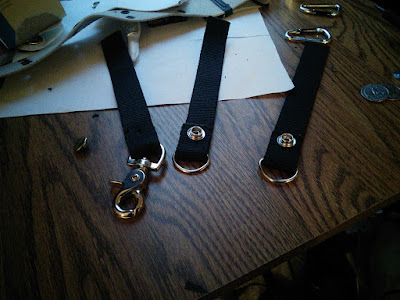 And snapped onto the belt (from GBFans shop): 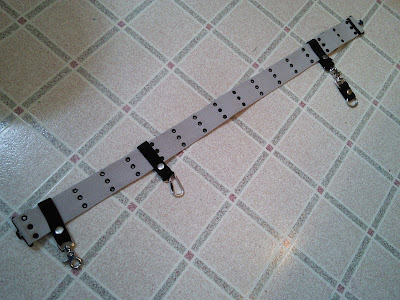 I hear you on the wanting the colour of the suits to match.

Here is a photo of some of our group. All but 1 of us are in Nomex suits and one is in a tru spec. His tru spec suit is needing to be replaced and I've convinced him to get a nomex suit so we all match. Can you tell which one in the tru spec?

I'm new to the group but the 3 new guys I've brought with me all have nomex suits where as the original guys have a mixture of tru spec, rothco, and 1 has a custom G and B. But, I'm an accuracy nut...

By Parflagush -  September 8th, 2014, 10:14 am - Posts: 287
-  September 8th, 2014, 10:14 am #4808552
I honestly can't tell! I can see subtle differences, but those colors in your photo match a lot better than mine does from what my eyes can see. My only experience with these suits is the one I own, and it looks way off to me. I have a comparison photo with other Ghostbusters, but I don't want to share it without their permission first. Just trust me that they are obviously different.

And 1 cheesy shot later... In real life I can see a big difference. Especially when there is a rothco in the mix too.

From the 3 nomex I have and the other 3 I have seen from the other guys, the nomex ones have had the same colour. As well as the extra pockets which bring in closer to screen accurate without having a custom suit made.
~Jay

For my gloves, I just got those from the GBFans shop. 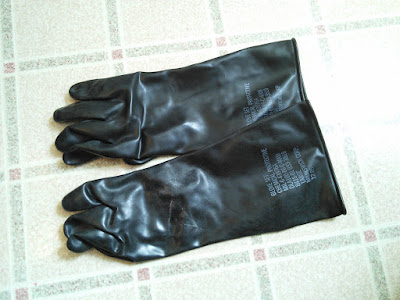 I think I need to heat these up a little so they don't look so wrinkled.

One problem I have with these gloves is that there is some powder-looking substance on one them that does not wash off with regular soap and water. 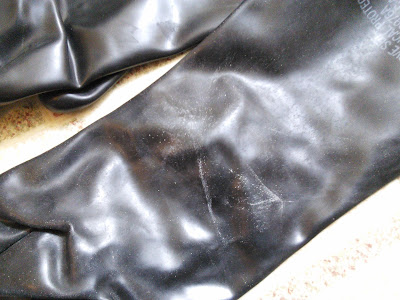 Now to decide where the franchise members want to […]

Well there is the Ectomobile Haynes manual :lov[…]

Would be nice to announce the preorder-option in[…]