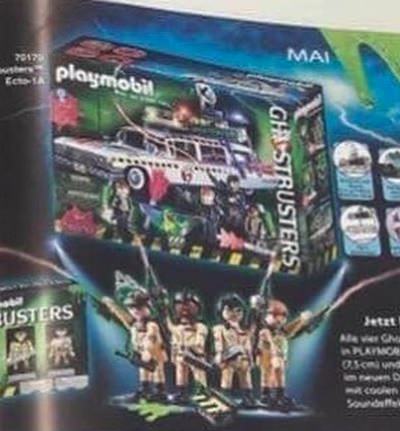 It's been just shy of a year since Playmobil announced the first expansion to it's Ghostbusters product line, and fans will once again be treated to more sets based on the boys in grey in the near future.

A scan from a German copy of the Playmobil catelogue has revealed that the toy company will be producing a replica of the Ecto-1A, a box set containing all four Ghostbusters, and a set of individually-packaged 6inch tall (twice the normal size) versions of the four Ghostbusters - similar to Funko Playmobil figures released a few years ago. The figures and car are expected to be released in May 2019.

Details are limited at this time, we will update this story when more becomes available.
Anton liked this
What would Ryan do?

Beyond the amber beacon being a little oversized[…]

Thank you both for the welcome. I hope Afterlife m[…]

Would be nice to announce the preorder-option in[…]