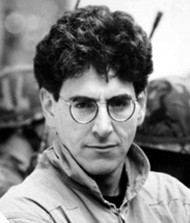 Spengler is a real egghead, a New Wave Mr. Spock, who single-handedly got Venkman through graduate school. Spengler is incredibly intelligent but amazingly dense at the same time. - Original Script Description

Egon Spengler is a tall, laconic, bespectacled, awkward member of the team responsible for the main theoretical framework for their paranormal/quantum studies. Being addicted to science, he is the creator of the Ghostbusters' equipment along with Raymond Stantz, thus making him the brains of the Ghostbusters. Although book smart, Spengler does not have much social ability, as demonstrated by his stiff interactions with the Ghostbusters' secretary Janine Melnitz, and his reliance on Peter Venkman as spokesperson for the group. Spengler is the most serious and rigid member of the team. Of his hobbies, Spengler states that he collects "spores, molds, and fungus", and claims that, as a child, the only toy he ever had was "part of a Slinky", which he straightened out. As implied in the first movie, Spengler apparently is a sugar junkie, due to his affection for sweets and candy (such as Twinkies and Nestle Crunch bars). He also once attempted self-trepanation, but was stopped by Peter Venkman. As Venkman told Spengler, "This reminds me of the time you tried to drill a hole in your head," to which Spengler replied, "That would have worked if you hadn't stopped me." According to the 2009 Video Game, Spengler sleeps an average of 14 minutes per day, leaving him "a lot of time to work."

On the DVD commentary, Egon is also said to be the "brains" of the Ghostbusters. When the other two guys are out in left field, it's Egon who brings them back down to earth. It's also Egon who developed all of the technology that the Ghostbusters use. 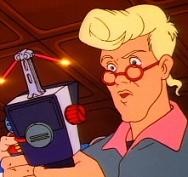 Sometimes I think the universe just waits for me to get cocky.

Spengler's hair was changed from brown in the films (Harold Ramis' natural hair color) to a blond pompadour in the animated series (Spengler wore his hair in a ponytail on Extreme Ghostbusters). This was reportedly done due to legal issues concerning character/actor likenesses. Despite his leanings toward science, Spengler has a family history of witchcraft (three ancestors, Zedekiah, Eli and Ezekiel, were wizards), of which he is not so much ashamed as strongly considers irrelevant, mainly because he sees science as relevant. Spengler's faith in science was also tested in one episode where the Ghostbusters get abducted to the ghost world by the ghost of Al Capone. Spengler's scientific equipment fails until he is told by former capos of Capone (who aid the Ghostbusters in revenge for Capone double-crossing them) that only magic can harm ghosts in the ghost world as opposed to science harming ghosts in the human world, thus forcing Spengler to accept the wizardry methods of his ancestors to defeat Capone. He is the love interest of Janine Melnitz, the Ghostbusters' secretary, in the first film and both animated series (Ghostbusters II excluded their romance due to Ramis' dislike of the subplot, thus having Melnitz date Louis Tully instead); Spengler sometimes appears to be unaware of Melnitz's romantic interest in him, but at times he displays having similar feelings for her, such as when he gave her a geranium as a gift when she expressed an interest in plants (which backfired horribly when it was revealed that the geranium was possessed by a ghost and nearly destroyed her apartment, along with much of Brooklyn; though Egon managed to thwart the ghost, Melnitz angrily told Spengler he would have to pay for the damages to her home) and when he rushed to her rescue in "Janine, You've Changed"; he also embraces her in "Ghost Busted" after she was kidnapped and held for ransom by a gangster, and became jealous when she was briefly involved with a slimy businessman named Paul Smart. In the episode "Cry Uncle", Spengler's well-meaning but skeptical uncle, Cyrus, visits him and, since he does not believe that Spengler's work with the Ghostbusters is real scientific work and therefore a waste of Spengler's genius, tries to make him come back to Ohio (where Spengler grew up) to work at his uncle's lab, but fortunately, after his uncle accidentally releases the Stay Puft Marshmallow Man from the containment unit, he realizes that ghosts are real and accepts Spengler's work. Throughout the series, Spengler would have his soul switched with that of a demon, have his molecular structure destabilized to the point that it stranded him in the Netherworld (requiring him to be rescued by the others), experience a curse-induced age regression that nearly destroyed him, turn into a were-chicken, and have his intellect switched with Slimer's. He has however, ceased his sugar junkie ways, only to briefly be tempted by a candy store when in Slimer's body (a likely fact that Slimer was an overt glutton). It is revealed in "The Boogieman Cometh" that, as a child, Spengler was stalked by the Boogieman, a supernatural monster that fed on the fear of children and hid in their closets, and was particularly fond of Spengler's fear; it was these encounters with the creature that inspired Spengler to study the paranormal, and as an adult, he would battle the Boogieman twice and defeat him. It is implied in one episode of the animated series that Spengler accidentally burned down his family's garage.

Egon Spengler is a genius. He got his first degree at ths same age his contemporaries were leaving grade school. Egon devised the theories that make the Ghostbusters proton packs, ghost traps, and Ecto Containment Unit work; he even later devised means of cracking the dimensional barriers, first with a door-like gateway, and later with the transdimensional warp drive mounted in the ECTO-4 (as seen in the Now Comics). He's proficient in ancient languages, including Sumerian and the esoteric script a Ragnarok announcement was written in, one that allegedly only two other people in the world know. In the Now Comics, he seems to be individually recognized by the mystic community.

Egon's curiosity gets the better of him more than once; he is by far the Ghostbuster most prone to getting blasted into alternate dimensions or turned into a werechicken due to being tuned out of reality while conducting his strange experiments.

Egon was born in Ohio, and it appears Egon's looks are the result of genes that run strong in his family--at least two of his ancestors (mostly scientists and scholars) looked just like him. Egon's mother doted on him and gave him the nickname "Spookums"; his paternal uncle, Dr. Cyrus Spengler, runs Spengler Labs back in Ohio, and once had trouble accepting his nephew's vocation. But it was a childhood trauma--the malevalent entity called The Boogeyman living in his closet--that made Egon so driven to investigate the paranormal.

That's not to say Egon is an emotionless robot, however. He manifests a dry sense of humor that comes out when deflating Peter's egotism, and a wonderful sense of understatement that describes the end of the universe simply as "bad". He keeps a cool head during a paranormal crisis, and is usually the one to find the way to solve it.

Still, he has trouble dealing with his emotions, and nowhere does that become more apparent than his relationship with the Ghostbusters' secretary, Janine Melnitz. At the very first, he seemed more annoyed than flattered by her over-stated flirtations (not exactly being proficient in the romantic arts herself), but over time, he grudgingly began to return the feeling. He whispered her name when he thought he was about to die on one occassion. He met Janine's family and went on dates with her that he denied were dates. He oozed jealousy when she dated Paul Smart and Louis Tully (in issue 16 of the Now Comic, they argue about the issue and Janine dismissed Louis as "Sweet but harmless").

It wasn't until the Ghostbusters discovered that she had been warped and manipulated by the Makeoverus Lotsabucks that he finally admitted that he loved her: it was that simple truth, not the proton pack he discarded, that broke the creature's spell over her. They started dating more seriously after that, going to science films. 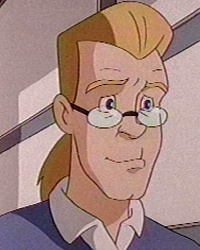 Spengler is the only original Ghostbuster to return for the Extreme Ghostbusters series as a regular, acting as a mentor to the new Ghostbusters (the others appeared for a two-part episode, "Back in the Saddle"), and monitoring and sustaining the Containment Unit while working as a paranormal studies professor at a university. He is the de facto leader of the new, younger team of Ghostbusters; although the old team had gone into retirement after they apparently dealt with all the ghosts in the city, after the digging of a new subway tunnel resulted in the release of an ancient ghost, Egon was forced to recruit his only four current students to act as the new Ghostbusters. Although willing to do his share of the legwork, Spengler overestimates his abilities and his aging becomes apparent when he is no longer able to work at the same level as in his younger days, generally working at the firehouse doing research while the team handle the actual 'Ghostbusting', though when the situation calls for it he will help. Melnitz is still carrying a torch for him, which leaves him a little flustered. He celebrates his 40th birthday during this series, which would put him in his late twenties when The Real Ghostbusters began. Age is the largest factor causing Spengler to having transition from active ghost hunting to a mentorship role; in one episode where the original Ghostbusters guest starred on an episode the audience clearly sees middle adulthood has affected the speed and weakened the stamina of the original Ghostbusters.

Egon: I feel like the floor of a taxi cab.

Egon: Try to imagine all life as you know it stopping instantaneously and every molecule in your body exploding at the speed of light.

Egon: Venkman, shorten your stream! I don't want my face burned off!

Egon: Well, let's say this Twinkie represents the normal amount of psychokinetic energy in the New York area. Based on this morning's sample, it would be a Twinkie... thirty-five feet long, weighing approximately six hundred pounds.

Egon: We'd like to get a sample of your brain tissue.

Egon: I think they're more interested in my epididymis.

Egon: We had part of a Slinky. But I straightened it.

Egon: Let's see what happens when we take away the puppy.

Egon: You're nothing but an unstable short-chained molecule! You have a weak electrochemical bond!

Egon: We eat Gods for breakfast!