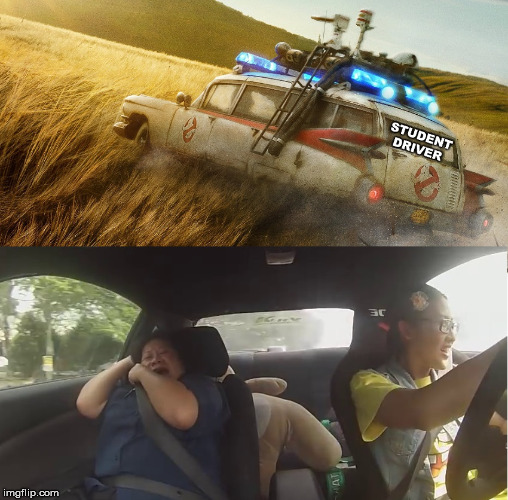 via Imgflip Meme Generator
LOL....
I used to be a Driving Instructor... It has its moments of Joy & Horror lol

And did I read Correct? Not till 9am EST?! well f&*#. Got up at midnight for not reason.

If my calculations are correct, I’ll be on my way to give blood when the trailer hits. And me with no mobile internet too.

If you give blood in a hospital, they have free wireless. At least that's how it works here in the Netherlands.

On the other hand, getting your heart to race while giving blood might result into giving too much of the stuff.

I’m not sure the elderly and/or nervous folks would appreciate me whoopin’ and hollerin’! I’ll just have to be extra patient...
Minor UK Indie Celebrity.

As for the Rick and Morty episode kingpin it doesn't start getting super, super raunchy until they have to save the dragon. I thought it was kind of a tame up until then.
back, Davideverona, robbritton liked this

By back -  December 9th, 2019, 2:33 am - Posts: 426
-  December 9th, 2019, 2:33 am #4927922
You know.........
You really gotta hand it to the Production staff and others alike for the Minimal leaks during shooting. Granted, ripping the Ecto-1 down a public street is kinda hard Not to film & upload to youtube, but you get what Im saying here.
This has been so tight-liped & mysterious that Just 'Enough' twitter photos were released to keep the public hyped. Frankly, Im Impressed. And who here has the 'best' Image editing software here guys? I remember Somebody was going to Dissect this trailer frame for Frame?

lol
SpaceBallz, deadderek liked this
A Long long time ago, In an IRC chat room at 24k....

Keep in mind this trailer probably focuses on the new characters the most. It's their story.

But it is going to be a ghost story.
back, deadderek liked this
Mad respect to Paul Feig for tweeting his support of Jason and how excited he is based off the trailer. That's awesome of him. There's a lot of fans who could really learn a thing or two from him. You can dislike his movies, but he's a truly good guy and he behaves way better than a lot of people in this fandom.

I just everyone is just as excited after they see the trailer.

Keep in mind this trailer probably focuses on the new characters the most. It's their story.

But it is going to be a ghost story.

I agree. Its a Continuing story... with a Lateral character movement in a sense. As badly as we'd like them to... A guy cant lug around a 100 pound proton pack forever.

I just Hope that the characters Dont 'Try' to BE a 'Venkman', 'Stantz' or 'Egon'.... Original personalities are Nice and its hard to tell a good story nowadays.

Pleeeeeze let's see some ghosts!
deadderek liked this
co-worker: hey the going away party is in the back
me (with new mullet): oh i know where the party is

2:20 is a beefy trailer length, I have a good feeling that we'll get the jist of the story and the look/feel.

Perhaps by NOT seeing ghosts in any of the First trailers will add up a little more excitement Hmmm....

deadderek liked this
A Long long time ago, In an IRC chat room at 24k....

Today I'll receive my Ecto plates (1, 1A and Rusty Crunch). What better way to celebrate the trailer release?
back, SpaceBallz, deadderek and 1 others liked this

Today I'll receive my Ecto plates (1, 1A and Rusty Crunch). What better way to celebrate the trailer release?

Got the plate some time ago ;P

via Imgflip Meme Generator
Kingpin, Sav C liked this
A Long long time ago, In an IRC chat room at 24k....

3.5 hours from now sir
co-worker: hey the going away party is in the back
me (with new mullet): oh i know where the party is

If it releases at 6 am Pacific/9 am Eastern, then it should release 3 pm in Italy because you are 9/6 hours ahead of us respectively.
Ghostbusters IDW Sales Chart (Updated for January 2020)


And, in the end, Patrick was right. They're making Ghostbusters 3.
deadderek, lozbloke, BatDan and 1 others liked this

Guys, we're coming to the end of all the theories, speculations, guessing.
And, in the end, Patrick was right. They're making Ghostbusters 3.

Not necessarily. Again the trailer should be enough to wet our appetites. I'm sure there's still room for speculation on the plot, or if any og's may or may not make appearances. We may still not know who the father is. That one might be left for Jerry Springer.

Paternity tests are really more of a Maury Povich kind of thing. He's a genius at determining the paternity of the trailer trash species.
timeware liked this
Dogs and Cats Living Together! Mass Hysteria!

$10 says if Sony drops it on Youtube they'll have comments disabled.

I agree, after the 2016 dumpster fire of a certain franchise based on COMPARISONS to Prior successes (which shall remain nameless)

I think Id be wise to Disable comments UNTIL the likes vs dislikes are weighed out.
deadderek liked this
A Long long time ago, In an IRC chat room at 24k....

I love you all!!!!
robbritton, deadderek, back and 1 others liked this

At any rate, two things I noted that I wouldn't mind being similar in Afterlife...

1. The motion picture score - it is great and I still like listening to it. I love how they incorporated the classic theme into the arrangements.

2. The use of blues and greens with the ghosts. That's not the same as loving the designs of the ghosts. I also thought the proton streams looked pretty great.

One thing that sticks out to me seeing ATC in several formats is the overall coloring was really almost like burnt. Skin tones were really red and unusual. The Atmos mix is pretty average, although, I think it could've been awesome. I think Afterlife is going to have a pretty average picture and audio, too. Hopefully, I am wrong and the audio is amazing and the Atmos mix is close to demo worthy.

Obviously with the movie being sadly delayed, one […]

Do these dimensions line up with what we know, app[…]

Much like the big two, as well as the other min[…]