by BashfulSpangler
Been a massive fan of the GB since I was a kid, must of watched the film's easily over 200 times. But it was only when I was older and watched them again I appreciated how genius the script, the storyline and the characters are actually are.

There was one thing im always left wondering. So in the first film they start their business from scratch and are unknown to NYC, that soon changes as their fame soon rises.

Then you have sceptical people in the two films like Walter Peck, the judge, the kid at the birthday party and his dad for that matter, the mayor's assistant.

In the first film when the containment unit is shut down and the ghost reek havoc on NYC were all these people not there to witness it? To see it up close and remove any doubt about the GB and their work?

Not mention when they prevent the end of world and as a thank are sued and put out of business, this is the part I don't understand. Why were they so cynical of them.

In GB2 they are hauled before the courts, the judge absolutely despises them and states he doesn't believe in ghosts. Was he in NYC to witness all the events of GB1?

Re: Not So Popular GhostBusters

by Fritz
In-story? Best guess: New Yorkers are supposed to be jaded and cynical and have short attention spans. I've always found it one of the parts of the movie I didn't really agree with either.

Meta: They wanted to tell the story of the Ghostbusters being considered frauds and losers then proving everyone wrong. Again. 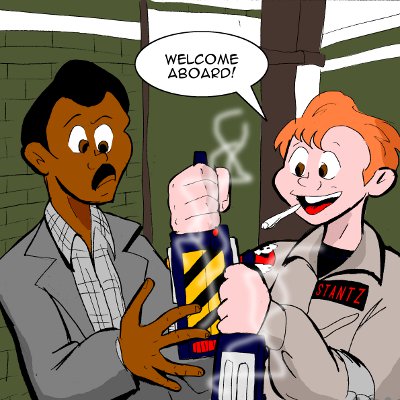 Re: Not So Popular GhostBusters

by Coover5
In the real world, for lack of a better phrase, there have been instances of entire communities spotting something about their city. It was unidentified. It was flying. It was an object. But was it an alien UFO? Was it a new jet being tested? Was it a prank? Did they really see anything at all? All those questions have been asked. Hundreds or thousands of people experiencing something at the same time but you still get non believers.


How to explain away Stay Puft? Parade balloon. The marshmallow mess? A gimmick. The damage from Stay Puft or the CU for that matter? it's New York. The place is huge and something is always going wrong. You go to New York now and people will tell you of aliens, voodoo magic, ghosts, mini civilizations living in the abandon subway tunnels. It's not to say people from New York are to be less trusted but it's a crazy town and it's hard to filter out people who are trying to make a name for themselves, people who are crazy and people who really believe in the stuff they tell you so it makes sense to me that people would stuggle to believe the Busters. Especially in GBii when ghosts apparently "disappeared" for 5 years.
All times are UTC-07:00
Page 1 of 1
Powered by phpBB® Forum Software © phpBB Limited