The Story of the Pre-Ecto 1 "Grey Primer Car"

The Story of the Pre-Ecto 1 "Grey Primer Car"

by ESpengler84
Information on the Pre-Ecto or Black & Grey Primer Car. 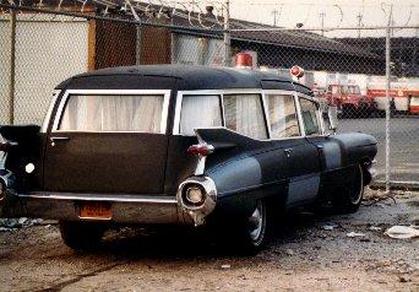 Hopefully I can shed some light on the story around the infamous ambulance which was used as the pre-Ectomobile.
A few years ago I was able to talk with the first owner of the vehicle, Roger, who is a really interesting guy.
Originally the pre-ecto a 1959 Cadillac Miller Meteor Futura was an ambulance used by the Bellwoods Rescue Squad No. 486. Bellwood, Illnois a suburb of Chicago.

Roger purchased the vehicle in November of 1982. Around that time he was a paramedic for a private ambulance company in the Chicago area. The vehicle was rented (not sold) to Sony for the filming of the 1984 Movie. He was also present during the filming of some of the scenes in New York City. A green light which was added to the passenger side can light serves as recognition of Chicago area emergency vehicles.

When the first Ghostbusters movie was released, Roger actually drove the grey primer car to a local drive in movie in June of 1984, and photos do exist showing the car which was seen in the movie at the drive in. Those photos were online at some point and might still be, but I don't recall where.

Roger owned the vehicle for a few years after that, eventually it was sold to a downstate paramedic and car collector- Ed? There are newspaper articles which reference Ed as the owner at one point, and he was involved with ambulances and emergency services. Later the black and grey primer car was sold and as of 2012 the vehicle was in a private car collection and in storage in Illinois, still sporting its original look from the film. I do know where the car currently is, and it is not on public display. I am purposely not including the last names of the owners because we don't need people calling them asking about the car.

The car was never acquired by or sold to the film production company (Sony) or turned into an Ectomobile for promotional use.

Vehicles that have been suggested to be the primer-Ecto are the Volo Museum Ecto-1 which started life as a 1960 M+M, and also the Star Cars Museum Ecto which may be possibly be the Mosen Ecto which was acquired by George Barris?

by Alex Newborn
Roger's pics and story of the car are still online, though he hasn't updated that page since July of 2001.

I started to include the link, but as it gives his last name at the bottom of the website, that would undercut your attempts to preserve his privacy in your original post.

His email address is on the site, too. When Roger provided a pic of the Primer car's prop New York license plate to a Lego YouTuber last year, both Derek Osborn and I did some internet sleuthing, independent of one another, and emailed him separately. He responded at first, but then his replies to both of us trailed off, so I agree it's probably best that we don't have a bunch of folks contacting him on the same old topic.

EDIT: I originally included the link to the YouTube video, but upon giving it another view, the narrator gives out Roger's last name as well, and it's fairly simple to track Roger down from the info in the video, as Derek and I both found. In lieu of the link, I have instead included a frame grab of the photo Roger sent to the YouTuber.

Then again, that video has been up since last Hallowe'en and has been viewed by 4,000 people, and a lot of us GB fans were sharing it on social media when it dropped, so in one sense the cat's actually been out of the bag for a while.

by Coover5
The cat has been out of the bag before, and yet, people lose interest and put it back in. I'm sure he would appreciate his privacy.

by Alex Newborn
Indeed, there's an existing thread on this very forum where last November our moderator Kingpin mentioned Roger's full name, and linked to both Roger's 2001 gallery of pics and the YouTube video.

Indeed, there's an existing thread on this very forum where last November our moderator Kingpin mentioned Roger's full name, and linked to both Roger's 2001 gallery of pics and the YouTube video.

Out of respect for recent developments, I've excised the links to the webpage, the video, and the reference to Roger's surname.

by 69428scj
Wow, if this is the actual case, than the red interior Ecto claimed to be the primered Ecto must've come from somewhere else!