Greebles and other parts from various dealers, grips by ThrowingChicken:

This is the gun just removed from the box I received three days ago from Chris (CPU64), assembled and with my Clippard R701 valve mounted on (wrong side, I know):

In the last days after receiving the gun I was very busy so don't had the time to thank Chris and Jason (jpa35) for their beautiful, amazing work. I really have no words to express the emotion I felt holding the gun in my hands... cold metal... weight... welds... A dream come true. 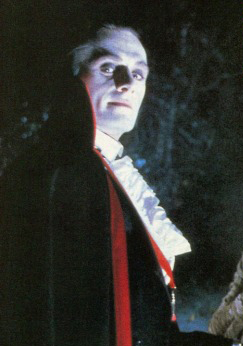 "I collect spores, molds, and fungus...oh and canadian quarters....I got about 6 of them" 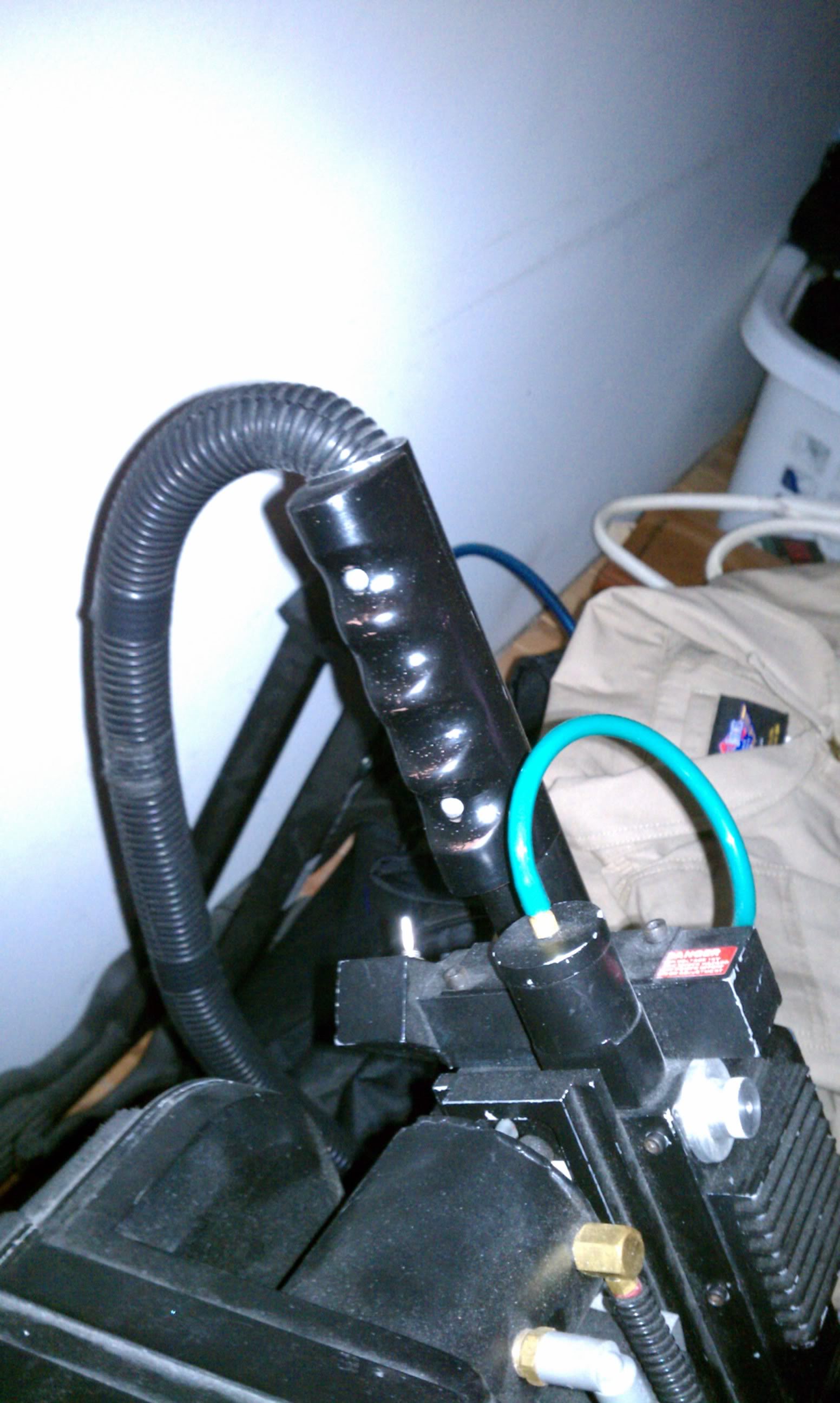 There are some more clear pics that show without doubt these are rivets?
My thrower build thread: http://www.gbfans.com/community/viewtop ... =2&t=25285.

c.fago wrote:Never said I don't wanna trust you, just I wanted to understand how did you found it out! Your word is absolutely fine to me! After all that's what you used on your thrower...

Oh yeah, I didn't mean to come off as stand-offish; I was just stating that I understand if you wouldn't believe me because I too question the "you are just going to have to trust me" kind of statements.

Switching to the front handle grip, I've read somewhere in the forum (mainly in this thread: http://www.gbfans.com/community/viewtop ... =2&t=24503) this should be held in position by the two 6-32 socket cap screws protruding from the barrel lock and the ear piece.

I agree for the first one as it is clearly visible here:

On the contrary I think it isn't correct for the second one, because the hole where the screw is located is totally misaligned with the grip, as you can see here:

By jimbo7 -  April 6th, 2011, 4:54 am
-  April 6th, 2011, 4:54 am#314716
that front bolt (on the ear) actually hangs out of the grip just a bit. its not lined up just right and i assume its just a mistake made by the prop guys. like burkit, i too have seen "secret" pics of packs and noticed this bolt location as well. if you look at this same thrower from the side, you will see that its only threaded partially into the side of the grip.

c.fago wrote:About the accurate pop-rivets size, 1/8" is referred to the diameter of the rod? How much these rivets should be long, in order to pass through the grip and the handle tube? Please, give me more specs as I have to find the metric correspondant...

Just noticed I wrote "correspondent" instead of "corresponding", "equivalent". Sorry for my English.

gEkX wrote:It one shot on GB1 when they are on the Tower you can see what appears to be a white zip tie on the end of the rear handle.

Yes, the zip ties are often seen in the movie and are still visible in the hero throwers survived.

However I need to know if they should protrude or be recessed into the grip and what should be the head diameter.

Also they are supposed to be originally painted black like the grip?
My thrower build thread: http://www.gbfans.com/community/viewtop ... =2&t=25285.

By c.fago -  April 11th, 2011, 6:26 am
-  April 11th, 2011, 6:26 am#315578
I just noticed that the rear handle grip fixing system has been already discussed in the Filandrius thrower build thread... Sorry. However, it has never been clarified if rivets was used in both movies, as the screenshots do not allow to see it, maybe because they was painted black like the grip.

So - if I have understood correctly - all the hero packs currently surviving are from GB1 and then restored and re-used in GB2?

Here is a pic showing some very little progress on my gun, just installed front and top knobs and the red/clear arcolectric indicators (I removed the light bulbs as they will be replaced with the Exoray' kit leds). Both knobs required a little extra work to match the shape of the screen used ones, as they missed some details (the hole on front knob and the hollow for the screw head on top knob) and had too sharp edges. All my knobs was made by Fenix Props (Argentina) about a couple of years ago according to Stefan's plans.

About the beautiful side discs made by jpa35, there is a very thin built-in washer that raises them from the gun body. Is it screen accurate? I do not remember any reference pics showing this particular.
My thrower build thread: http://www.gbfans.com/community/viewtop ... =2&t=25285.

And what I'm working on right now...

Wow, metal AND tip extend AND vibration motor AND what looks like the Jupiter kit. Impressive. The inside of that thrower's gonna get real snug real quick!

In the meantime, do show off more of that tip extend mechanism!
Fossil's One-Stop WIP Thread

Kingpin wrote:That's by far the tidiest Proton Gun interior I've ever seen, this is going to be something really special when it's finished.

Once he starts installing switches and lights, that'll change.

Looking pretty clean though.
WHY BUY IT WHEN YOU CAN BUILD IT?

From my last update in April I've also bought some more screen accurate greebles and real parts than the ones I already had, like the correct hat cap lens with socket bases from AJ Quick, Legris old-type banjos and Clippard valve old-style screws from Masteryoda, dry rub transfers and labels from Parksdesign.

Even if I'm a little skilled about model making, because of my inexperience in electronics and since Exoray's kit is no longer available I decided to start trying with something not too much expensive, so I bought the latest version of the gun light kit from Jupiter with amber bargraph and a few customizations (just received), and the sound board from Crix (waiting for delivery).

The problem is that the Jupiter's light kit comes with dpdt toggle switches but single pole pushbutton. They also says it has "a built-in voltage regulator which can work over a much wider voltage range than the specs indicated in the item description, allowing you to operate the light boards at whatever different voltage your sound kit needs", but I don't know if this feature allows me to wire both the sound and the light boards to the same single pole pushbutton. To get the barrel flickering light activated together with the stream sound and the vibrating motor maybe I would need even a triple pole button...

FossilizedArt wrote:In the meantime, do show off more of that tip extend mechanism!

Asap I'll post a short video showing the barrel extender in action. I'm looking for a solution involving magnets to keep the tip closed or extended.

Kingpin wrote:That's by far the tidiest Proton Gun interior I've ever seen, this is going to be something really special when it's finished.

Once he starts installing switches and lights, that'll change.

I know you're totally right...

Anyway - while this may be of interest to someone - I have no intentions to build a whole pack as I'm a movie prop collector from many years with serious problems of space! I'll make just an external ausiliary box to accomodate the sound board, amplifier, speakers and batteries.
My thrower build thread: http://www.gbfans.com/community/viewtop ... =2&t=25285.

FossilizedArt wrote: Wow, metal AND tip extend AND vibration motor AND what looks like the Jupiter kit. Impressive.

The only think i HATE about Jupiter electronics is the stupid pulsating Vent light. It was such a turn off for me. Lukily i used it in a resin gun n pack that i built and sold off right away. His bar graph was brighter than my Proptronix bar-graph too in my aluminum gun

xtrmn8r17 wrote:The only think i HATE about Jupiter electronics is the stupid pulsating Vent light. It was such a turn off for me. Lukily i used it in a resin gun n pack that i built and sold off right away. His bar graph was brighter than my Proptronix bar-graph too in my aluminum gun

In fact, a fixed vent light was the first change I asked to Jupiter. But in the end I decided to replace it anyway with a self-powered incandescent lamp.

Still about the lights, anyone does know if the recessed white hat cap lens near the vent holes on the top of the gun was never lighted on the screen?

FossilizedArt wrote:
In the meantime, do show off more of that tip extend mechanism!

Asap I'll post a short video showing the barrel extender in action. I'm looking for a solution involving magnets to keep the tip closed or extended.

Here are more pics of the green lever assembly.