By PssdffJay -  September 15th, 2013, 4:23 pm
-  September 15th, 2013, 4:23 pm#459657
Hi everyone! With so many people making their own packs and some great tutorials and awesome people making and selling some great parts, I've decided to give it a go. Originally I had contacted Vincenzo to have one of his phenomenal packs made for me sometime next year, and I may need to go that way if I royally *expletive deleted* this one up. I hope he's not mad.

I went to Army Surplus store just to see if they would have one, and low and behold, they had an original Alice LC-1 frame attached to a bag. I asked if I could buy it and he said "don't you want this brand new one with wood land camo straps?" I told him I would prefer the old one he had. He asked me again just to make sure and I said if its not much trouble to remove it from the bag, I would like the old one. In the end, I think he realized he could either make money today or not.

The flash makes the straps look like a weird colour.

Now to start assembling a list of parts I'll need and prices and sellers. I'm excited and a little afraid of what I'm getting myself into but I think if I can pull this off, it will be awesome!
Last edited by PssdffJay on September 7th, 2015, 11:50 pm, edited 2 times in total.
tilallr1 liked this
~Jay

By PssdffJay -  October 21st, 2013, 9:48 pm
-  October 21st, 2013, 9:48 pm#464492
I got some parts in from the GBFans shop. Light kits, connecting cables, dry rub stickers. Missed out on the sound board this time. I have put in orders for the GBFans shell and mother board, GB1 Ribbon cable when it was in stock, some various bits and pieces. The deluxe aluminium parts from Vincenzo330, Bumper and Booster Frame from Nick-A-Tron, and bellows and frame mounting hardware from MMM. This should be enough to get me started anyway. I'm off work for 12 days in November (had to use my holiday time or I would loose it) so I should be keeping pretty busy. I know there is lots more to order still but I'll post up a parts list of everything I have once its all it.
~Jay

By KagaSakai -  October 22nd, 2013, 7:04 pm
-  October 22nd, 2013, 7:04 pm#464626
Great find on the LC-1 frame and kidney pad (it even has the turnbuckle!), but sadly the shoulder straps aren't accurate LC-1. Fortunately, the frame and kidney pad are usually the harder parts to source, so you're of to a great start!
PssdffJay liked this
"Why worry? Each of us is wearing an unlicensed nuclear accelerator on his back."

Silverstreak wrote:Sounds like you're off to a hell of a start with that component list. Looking forward to your feedback on the gbfans shell, I haven't seen too many things (good or bad) said about it.

I'm not that familiar with the differences on the straps. What about them is wrong? I may just let that fall into my 95% accurate rule! Lol.
~Jay

Thanks! I'm still looking for the "insert tab A into slot B" instructions... There will be lots of stupid questions in the following posts!

Hoot - your build was one of the first things I subscribed to! Lots to go through in there, I will be making lots of notes.
~Jay

PssdffJay wrote:I'm not that familiar with the differences on the straps. What about them is wrong? I may just let that fall into my 95% accurate rule! Lol.

The LC-1 shoulder straps have a distinct "V" style webbing that connects the straps to the frame and they are also very thin with little padding. The left strap also features a quick release with no button up guard while the right strap has no quick release. 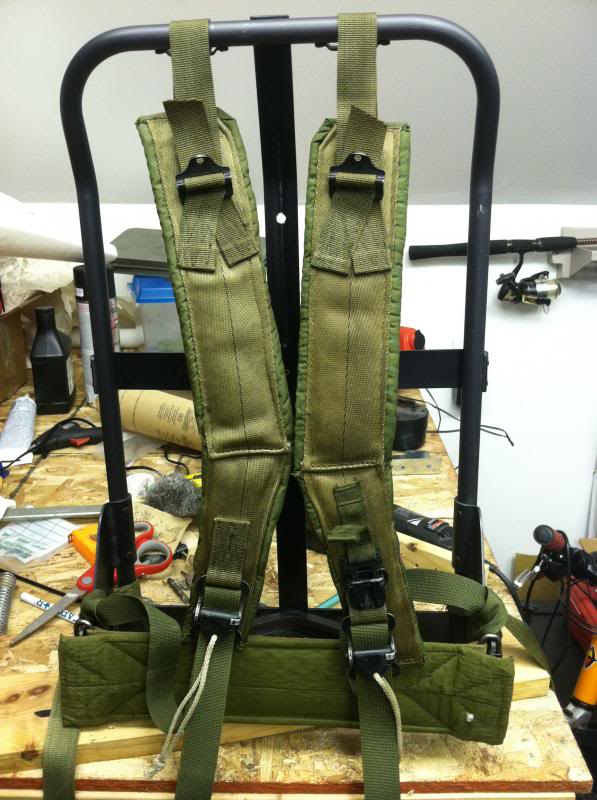 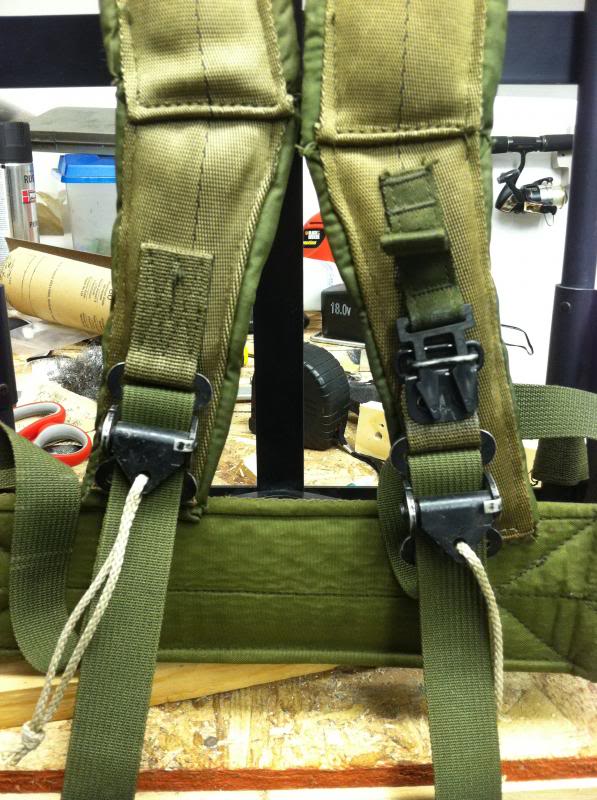 But regardless of any of this information, remember that as long as you're happy with your pack and have fun building it, that is all that matters!

PssdffJay liked this
"Why worry? Each of us is wearing an unlicensed nuclear accelerator on his back."

Did you already drill the top hole in your frame before the photo or did it come with that hole?
~Jay

irricanian liked this
"Why worry? Each of us is wearing an unlicensed nuclear accelerator on his back."

And, because someone happened to point out that my straps were not LC-1 straps... I decided I needed to find the correct ones. They will be here soon. Thanks Kaga Sakai for pointing me in the correct direction!
irricanian liked this
~Jay

By PssdffJay -  October 29th, 2013, 1:48 am
-  October 29th, 2013, 1:48 am#465330
My GBFans GB1 ribbon cable arrived today. It's much bigger than I thought it would be, but I have also never seen one live before. Still waiting for my big order to ship out with the shell and various parts. I'm going to need to build a work area in my basement. It's snowing here already and my garage is not heated. My basement is developed but there is some space I can convert for now. That will be my task for the next couple of days while I wait.
~Jay

Still more to come in. Waiting for Vin's aluminum parts to ship out and some parts from Doug. Then I'll end to really start looking into more gun parts.
~Jay

You seem to have a lot of shock mounts/bellows there for one pack.

And I see you found correct LC-1 straps pretty fast.

Alex
PssdffJay liked this
What a knockabout of pure fun that was!

Looks like a blast! I'm gathering parts for another build right now; be sure to ask questions!
PssdffJay liked this
My Scratch Built Pack and Thrower: http://www.gbfans.com/community/viewtop ... 39&start=0

By PssdffJay -  November 7th, 2013, 10:54 am
-  November 7th, 2013, 10:54 am#466893
Haha! The shock mounts... I saw that the ones from the Gbfans store were all gone and I didn't want a resin copy, I'm trying to go for as many metal or real parts as possible so I picked up an MMM shock mount first. THEN AJ decides to sell off some of the scratch and dent ones on EBay. I couldn't let that opportunity pass without getting a couple. I was thinking for future projects too.

It is a little daunting looking at all those bits and pieces. I think it finally hit me last night when I picked up my shell and other parts from the post office. I've never been so excited to open up a box! Then it was an oh crap moment. What have I gotten myself into!

The straps are a little off. I posted in another thread but the stitching on the straps is off. I don't think it will be an wearability issue, I have big shoulders and a large chest and trying to find a suit jacket that isn't custom isn't fun, and my current straps are adjusted as big as they can to fit. I'll try it later when I can mount the shell to the mobo and then to the Alice frame.

Here is what I'm talking about with the straps.

The colour is slightly different and I thought the seller sent a miss matched set but the numbers in the inside look like they are correct. I guess just a bad day on the sewing machine.
~Jay

Disclaimer: Many stupid questions soon to follow and many many photos will be added.
~Jay

First up is my Gbfans shell and mother board. They look pretty good! A few little chips in the (gel coat?) I think it's called but nothing that can't be filed in. I am a little bummed about this part though. I don't know if the mold for the shell isn't hold up well, or if this is normal warping or who knows what, but the shell and mobo don't line up that well at the top. See the follow photos. Maybe this is just how it is.

When I line the bottom up it looks good.

The sides look good too.
~Jay

Thoughts? I tried lining it up at the top and it's worse on the bottom. I figure if I have to trim, the top will be easiest. The little tier thing at the top doesn't look fun to trim down.

I've got a good 1/4" or 6mm for you fellow Canadians of overhang at the top.
~Jay

I moved it up a little higher so the bottom has about 1/16" over lap.
~Jay

By PssdffJay -  January 26th, 2014, 12:43 am
-  January 26th, 2014, 12:43 am#474278
I picked up a set of L brackets from Eric (Ejgunth87) and they came in 2 days ago. That's what finally got me off my butt to start something whilst I wait for Vin's aluminum parts to arrive. I want to get the shell mounted and, make the spacer and get the mobo mounted to my frame and then I'll at least feel like I've done something rather then just stare at the large pile of parts and boxes growing in my living room. Btw, basement too cold, and garage too cold so I'm building in my kitchen. Probably going to be a few nights of take out because I don't feel like moving this out of the way. That's ok, I wish I could find Chinese food in those little white box containers. It would just feel right if I could.

ANYWAY... So I placed the brackets down and taped them up really good and did a test fit. A little too low on the bottom 2 so I readjusted and (Video)Bob's (hopefully NOT) your uncle and it fits great. Marked them off and labeled which bracket goes where because I'm OCD like that. Next the drilling and tapping which I've never done before. Or used a rivet gun before. Hopefully I don't rivet my hand to the mobo...

This isn't from the shoot but I had lots of it so I decided to take a quick selfie!

The aluminum should tap easy, just go slow and use oil. If it binds up, back it off a little bit to clean the filings out of the threads.

I can't speak for anyone but myself, but the hardest part is always getting started.

mmm....blood. Finger wounds really bleed like that; don't ask me how I know *cough* crushed a finger tip */cough*

PssdffJay liked this
If you can read this, you don't need glasses.
Pack Build
Uniform

I need to drill out the holes at the bottom a bit to fit the MMM Alice frame mounting bolt through but I did notice the washer and the L bracket will hit so I'll need to clip the corners on the L brackets first too.

A question about the mounting hardware. I did a test on the frame and is there supposed to be a gap between the frame and the first washer? The washer doesn't fit around the square part of the bolt and I'm thinking it's going to not be tight when I attach the mobo. Here is a phot of the gap.

Should the hole in the washer fit around the square part or is it supposed to have that 1/16" gap?

I can't test until the morning once I drill out the hole on the mobo a bit.
lapena77 liked this
~Jay