The answer was that Stephan's plans weren't totally accurate, but a good place to make a pack nobody else would know was inaccurate, so I got to thinking;

It's been a while since Stephan's plans were considered canon, and I've sought approval to update the plans to remove the known discrepancies, and create the GBFANS plans, which can be updated as needs dictate.

It would be my proposal to go through Stephan's plans one sheet at a time, and create 1:1 drawings that can be used to build your own pack, or mounted on foam board as some really cool wall art.

The logical place to start would be the motherboard, which is sheet 1, and work our way through.

I think we could get through this in 3 to 4 weeks if the input was solid, and I'll get AJ to make a new plans section for the community effort. 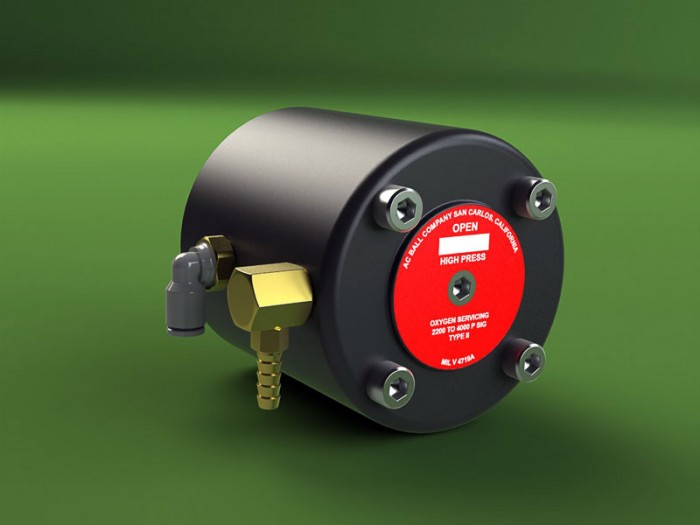 In the pursuit of scientific answers, animals have been tortured for the past 100 years.
They're still not talking. I'm starting to think they don't know anything.

I'll start there.
In the pursuit of scientific answers, animals have been tortured for the past 100 years.
They're still not talking. I'm starting to think they don't know anything.

Seriously though, a new set of plans based on what we now know is something that's been long overdue... I'm definitely looking forward to seeing how things develop and materialise.

I'm not sure how you'd plan on having other people involved or what software you'd be using but I'd be more than willing to supply time to this if you need it.

This is your house, AJ, and the title makes much more sense.

Thank you.
In the pursuit of scientific answers, animals have been tortured for the past 100 years.
They're still not talking. I'm starting to think they don't know anything.

Here is the first file for the power cell and injectors

Can we have any corrections by Friday, please?


Dave
In the pursuit of scientific answers, animals have been tortured for the past 100 years.
They're still not talking. I'm starting to think they don't know anything.

If it's the former, then I suppose the straightened fins are acceptable, but if it's the latter then the fins would require modification to include the slanting on the side of the Power Cell, and the thicker end where the lowest fin meets the Mother Board.


Dave, what program are you using to produce the Elevation and Isometric views? It AutoCAD?

It creates a solid model, then the drawings are made from the finished model.

I can even produce files to 3D print the pack when I'm done.

I'm happy to slant the fins, and to make the base thicker as agreed.

That's what all this is about.
In the pursuit of scientific answers, animals have been tortured for the past 100 years.
They're still not talking. I'm starting to think they don't know anything.

It might help if you put in some of the corrections from the beginning to limit the number of needed. The reference section has several pictures of the power cell alone with a tape measure next to it in case you weren't aware. That's what I've been doing while modeling my parts.

Kingpin does raise a good question about what type of plans we're making. I would prefer plans based on the real life packs while I'm sure others would prefer an idealized pack as mentioned.

Also sent you a PM.

The 3d Files should be made in a way that would allow them to be opened, edited and re-uploaded by anyone to make improvements. (Solidworks files are probably going to be the best for that). We'll have to start a section in the Wiki for them, and I'll have to make prt, and sldprt files accepted as upload types.
Like Ghostbusters Fans on Facebook: http://www.facebook.com/ghostbustersfans
Follow Ghostbusters Fans on Twitter: @gbfans

My personal preference for gbFans site plans would be for accurate plans as close to all the random details the hero's had.

I think you need a thicker base for the lowest fin...the far side of the powercell tapers in towards the front. The bottom fin almost looks like a wing instead of a straight line...

I'll have to upload another picture of my model to show but I think it's just the perspective of that shot or the age of the model. The bottom part of the fin on my model sticks out far enough so that the injector tube plate and the part I'll call the powercell/injector spacer (I think about 3/16" thick) sit flush at the bottom of the powercell as shown in this picture: I've never used Solidworks but I'd love a chance to learn it and contribute in any way possible.

The difficulty is knowing if the imperfections are design intent, or rushed workmanship.

It was never intended that the prop -and that's all it is - was ever going to stand up to closer examination.

The original R2-D2 props were the same. Very rough.

It was adapted that we correct the imperfections, and rebuild it as if it was a precision machine.

Whatever we decide to do here is fine with me.
In the pursuit of scientific answers, animals have been tortured for the past 100 years.
They're still not talking. I'm starting to think they don't know anything.

Ramjet wrote:The difficulty is knowing if the imperfections are design intent, or rushed workmanship.

Obviously details that are warped or broken will need to fixed up and not presented in the plans. Things such as the fin spacing on the powercell, crankbox, and gun mount, while not perfect, should be modeled and presented as they actually are in my opinion.

If a person were to decide to "idealize" their pack, it is much easier to space the fins out evenly on their own than try and figure out the actual uneven spacing the screen used packs have.

Again, this is all my personal preference and it may differ from everyone else. I sort of see Stefan's plans as an idealized pack already and these plans would be created to reflect the actual unbiased dimensions of the props.

By drjameshouse -  September 29th, 2013, 4:43 pm
-  September 29th, 2013, 4:43 pm#461387
Personally I would vote for screen accuracy. I think that's what most people want. It's what I want. If there were enough demand for an "Idealized" pack I guess you could make another set of plans? But the problem with "Idealized" is who is to say what is "Idealized"? The nice thing about screen accuracy is that it isn't subjective. And honestly if you wanted an "Idealized" pack then Stefan's are pretty damn close already.

By AJ Quick -  September 29th, 2013, 6:53 pm
-  September 29th, 2013, 6:53 pm#461394
I agree that Stefans plans are close enough as far as idealized is concerned. The only thing not idealized about Stefans plans is the taper on the crank generator.
Like Ghostbusters Fans on Facebook: http://www.facebook.com/ghostbustersfans
Follow Ghostbusters Fans on Twitter: @gbfans 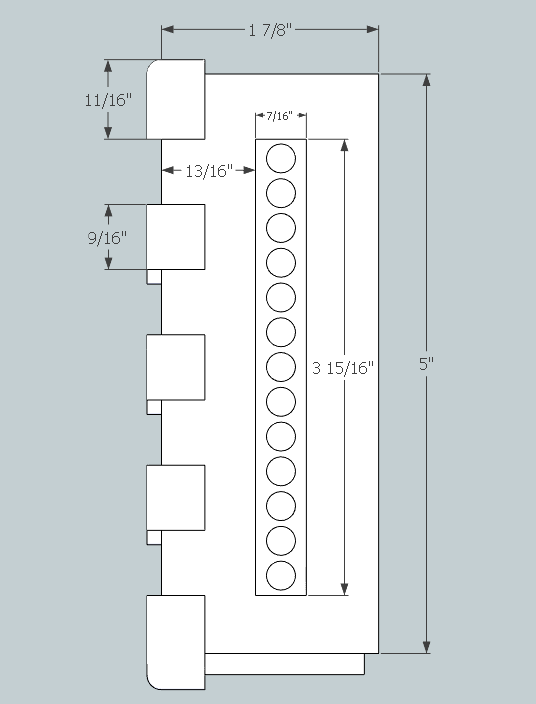 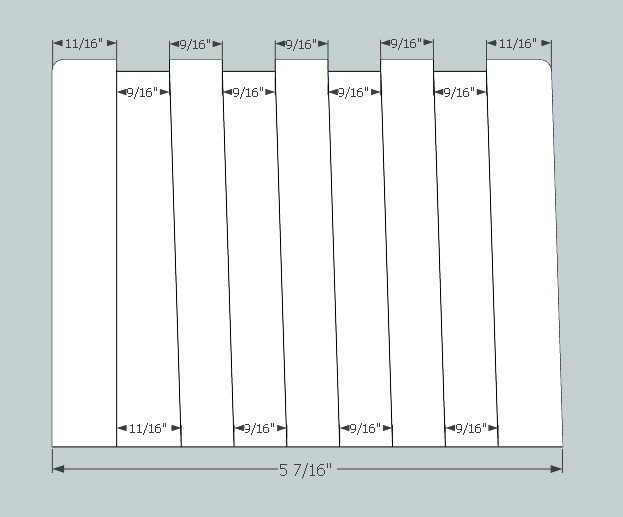 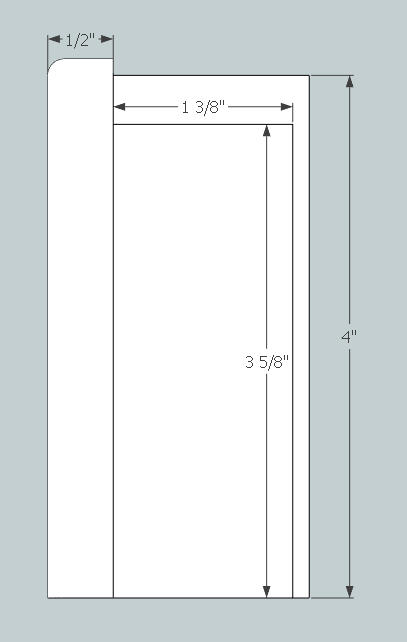 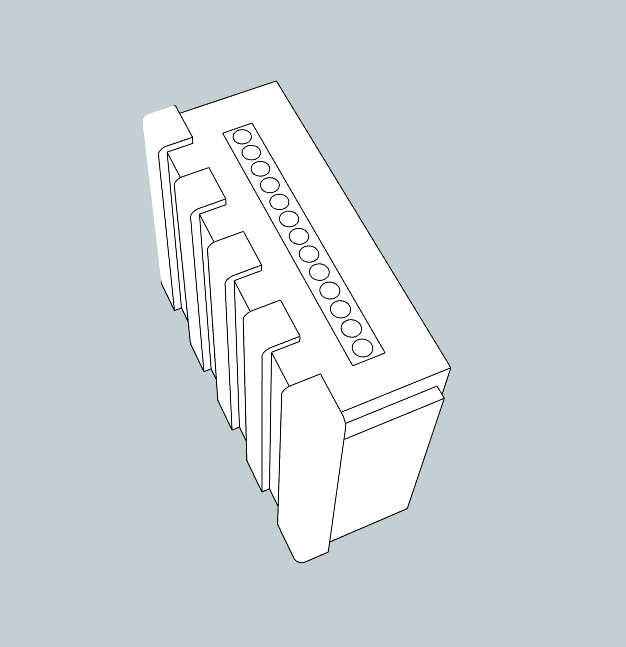 julz: Here is how the bottom fin looks from a direct angle. You can see that even with the 3/16" plate on the model, it still sticks out roughly 1/8". 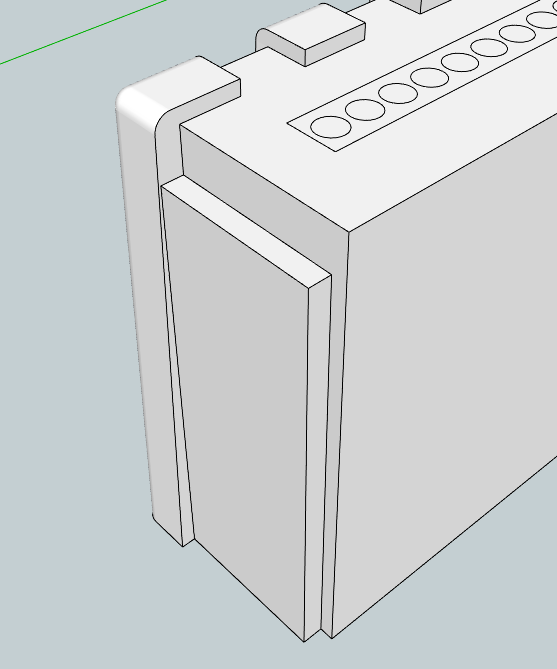 Let's get this thing going!

What I was referring to was from above or below the powercell the front of the powercell is shorter in width than the rear of the powercell where it meets the pack. so looking up from the bottom all the fins actually start of thicker and wedge down to the front sort of like a triangle or wing. 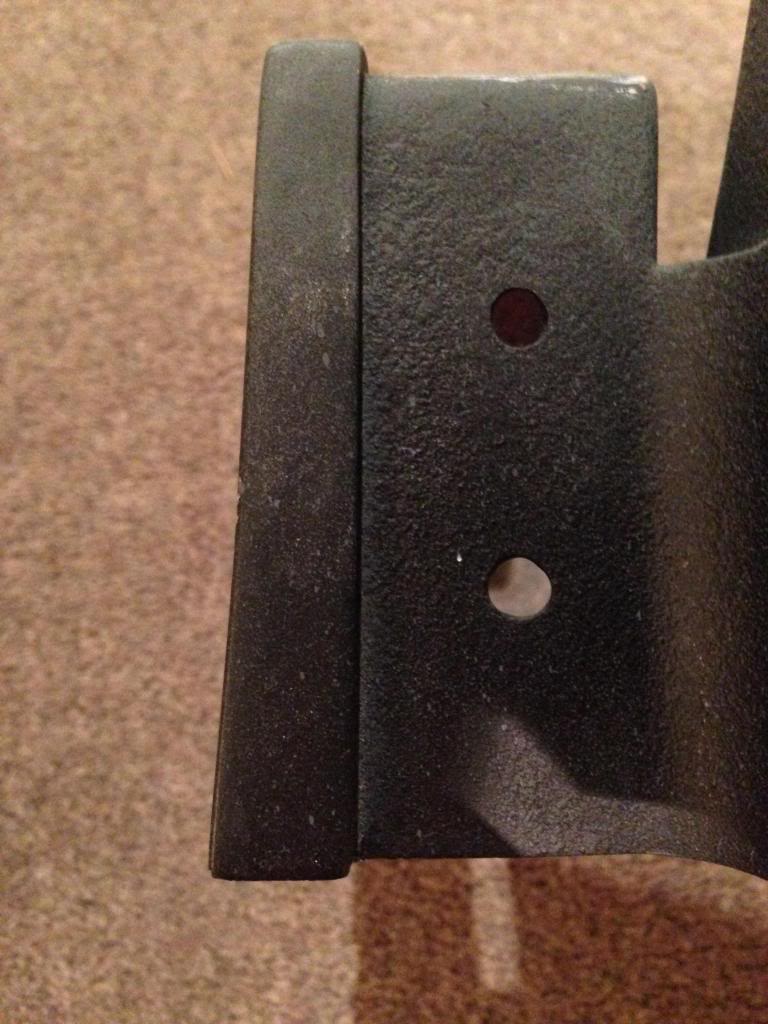 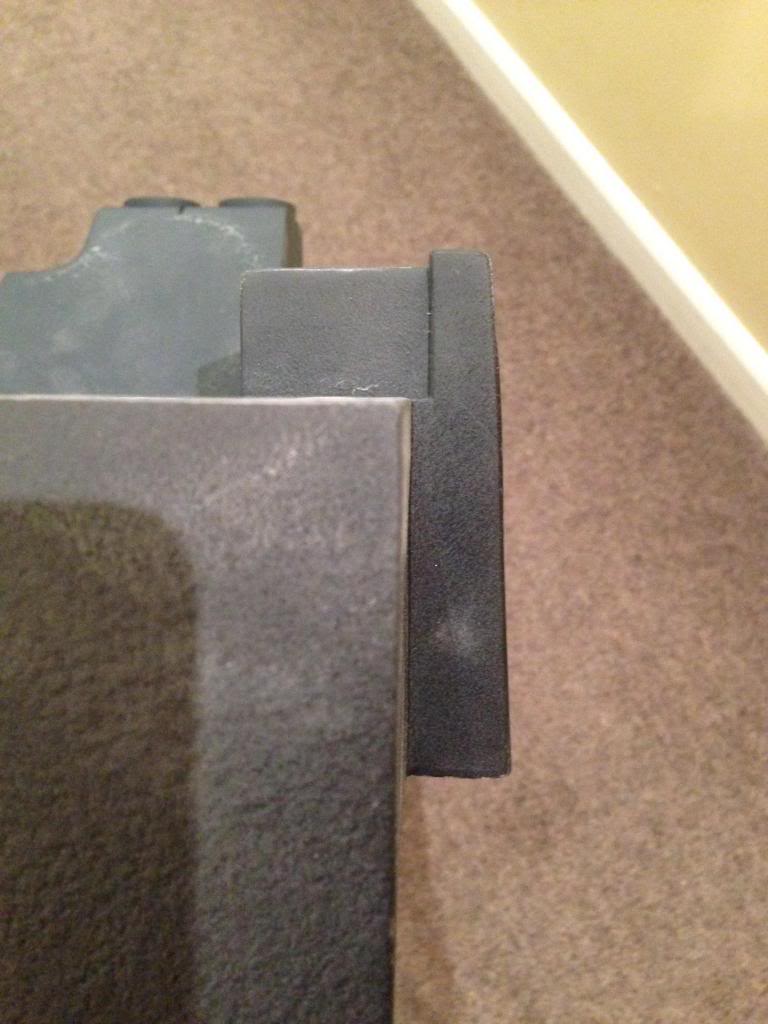 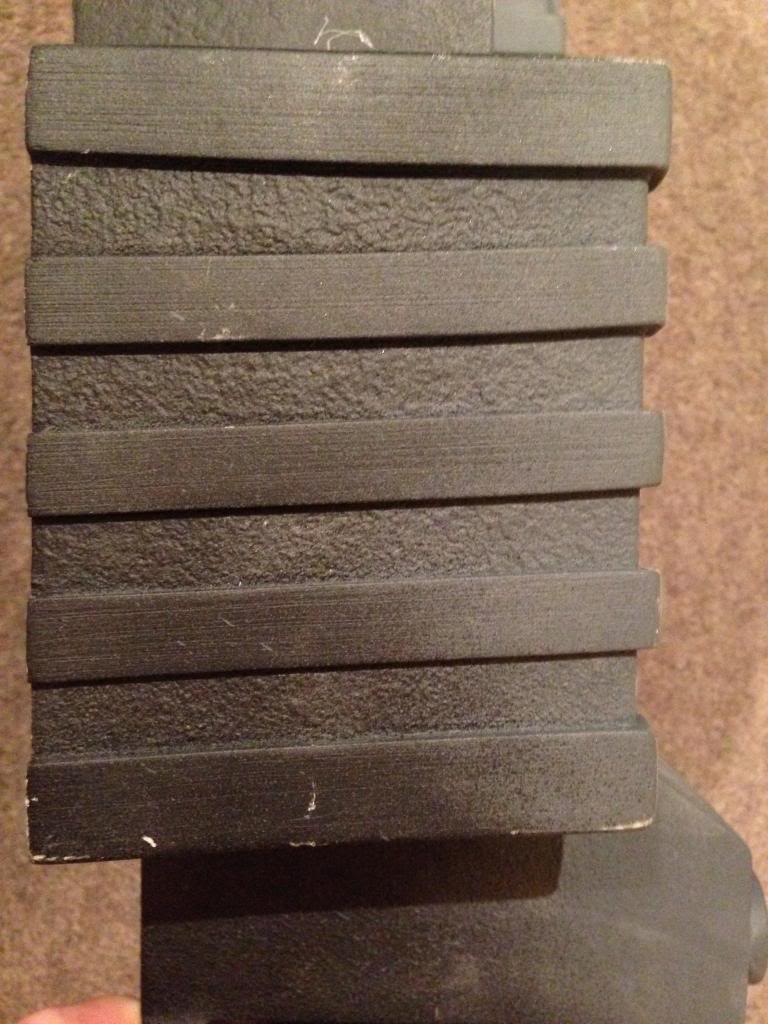 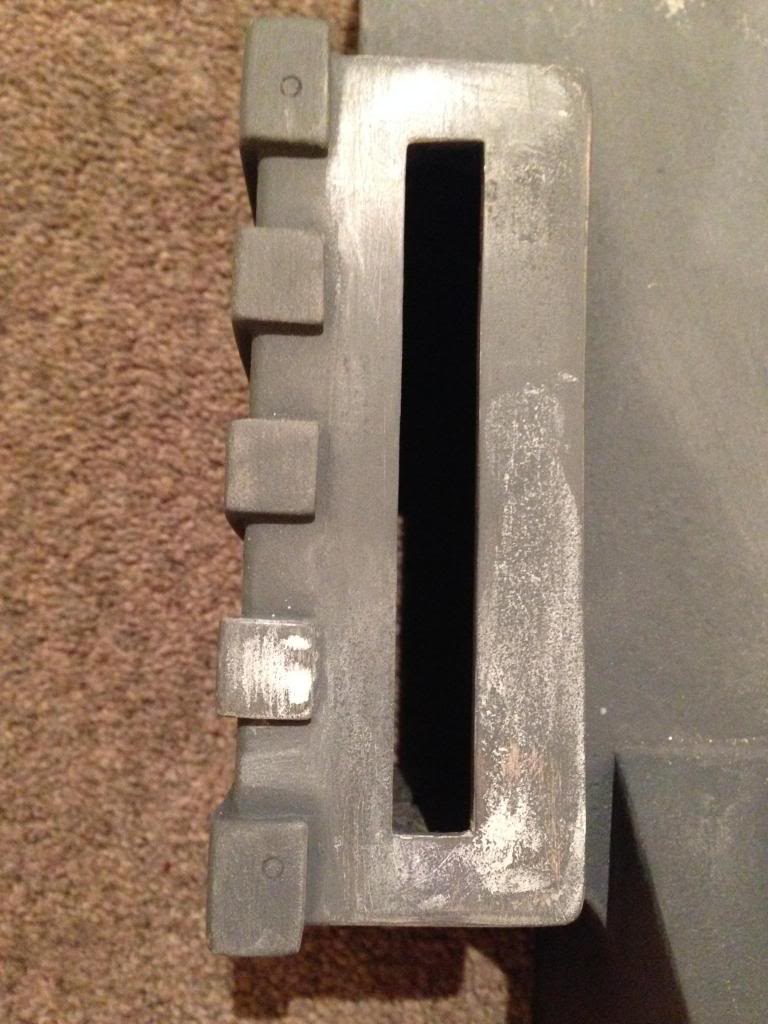 What I was referring to was from above or below the powercell the front of the powercell is shorter in width than the rear of the powercell where it meets the pack. so looking up from the bottom all the fins actually start of thicker and wedge down to the front sort of like a triangle or wing. If you compare the top of the fin there to the bottom there isn't much difference as opposed to what your pictures showed.

I assume the pictures you posted were of the Venky shell? I'd be hesitant to use that as reference for this as I thought it was originally a stunt pack that has been overhauled and casted several times (or so I've read).

What are your guy's thoughts? I've been looking at pictures too much to know anymore.

It might seem a little or a bit more subtle but it's still there to my eye. The rear of the fin is defiantly fatter...

Ha, no fight! Just wanted to be sure as I hadn't seen it like you guys have.

About how much does it taper out at the bottom? 1/8" maybe or more?

If you look at this image, you can see the Power cell does taper, but the thickness of the rib is constant.

Can we agree with the angle of the ribs on Cole's drawings, and that the taper is due to the shape of the box, and not a varying thickness thickness of the ribs?

Also, the injectors sit on a second plate under the standoff/platform that is already indicated in Stefan's plans.
In the pursuit of scientific answers, animals have been tortured for the past 100 years.
They're still not talking. I'm starting to think they don't know anything.