The first thing that I want to say is thanks to anyone who has helped me out so far by providing info. parts etc. We all know that these builds are truly collaborative efforts.

I have been gathering parts for a few months now and am just now getting started. I am still waiting on various bits and pieces and will be ordering my GBFans shell next week. My first purchase was the new Throwing Chicken V3h kit. Man does this guy make it easy to make a noob like me look like I know what I am doing. If you are looking for an amazing thrower kit that is easy to build and insanely accurate, I'd go with TC!

After basic assembly I started my fake welds. I made the mistake of first using regular plumber's putty and a day later realized that the stuff never sets and stays gooey. After a bit of research I removed those welds and moved to the good stuff. Moldable Plumbers Epoxy. Much better! I used Throwing Chicken's method of rolling tiny balls of clay and applying them individually. It takes a little bit of time but the end result is really cool. I am happy with my fake welds for a first time try.

I did a little bit of light weathering as the second coat of Black Satin was drying and am pretty happy with the results so far. I will try and get some more detailed photos as I go.

Once everything was dried I installed my aluminum gun knobs (Thanks to Colin @ MMM). If you are going to make one upgrade to your TC kit I would go with the aluminum knobs. I'm still waiting on my tap and bit for the 4-40 screws so I have not put the top knob on the gun yet. I also added the dry rub transfers thanks to the GBFANS shop. I still have to add the label to the side of the light bar, I will be doing that this week.

ALSO: The Clippard valve on their right now is my 331. I need to switch it out with my 701 once is arrives.


Like I said I have some more work to do on the gun like adding the banjos and red tubing. I have not picked up an aluminum gun knob yet so that will happen soon. I am also going to change out the green tubing on the side lever so that it matches the one that connects the two barbs on the other side. I am also adding the hat lights from the GBFANS shop.

On to the pack as I said before I have not gotten my shell yet but it will be here soon. I have a lot of parts gathered right now and am only missing my GB1 Ribbon Cable and Clamp, Bumper, Bellow, and ALICE Frame. Everything else has been ordered or has already arrived.

The Resin pieces that you see in the photo are all from CRIX's Resin Hero Parts Kit. They are awesome parts and the next best thing to all aluminum parts. The booster tube is also from that kit. Big thanks to Crix for these!

Does anyone have a good recommendation for the correct shade of gray for the crank knob? The primer I used looks a little dark.
My GB1 Pack Build---http://www.gbfans.com/community/viewtop ... =2&t=36244 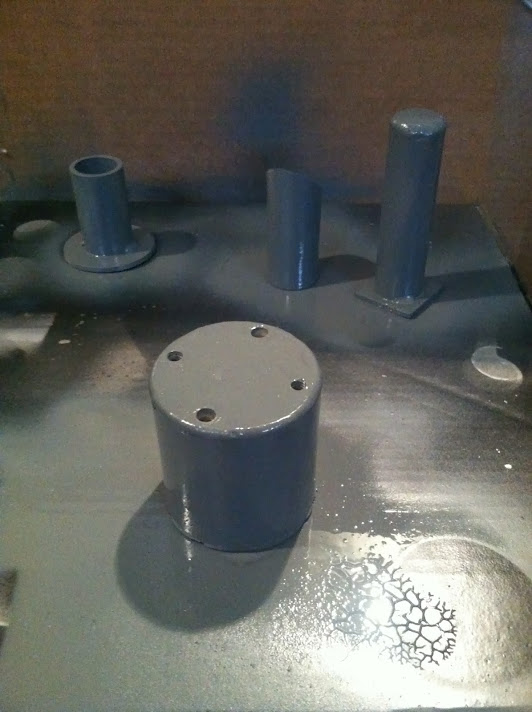 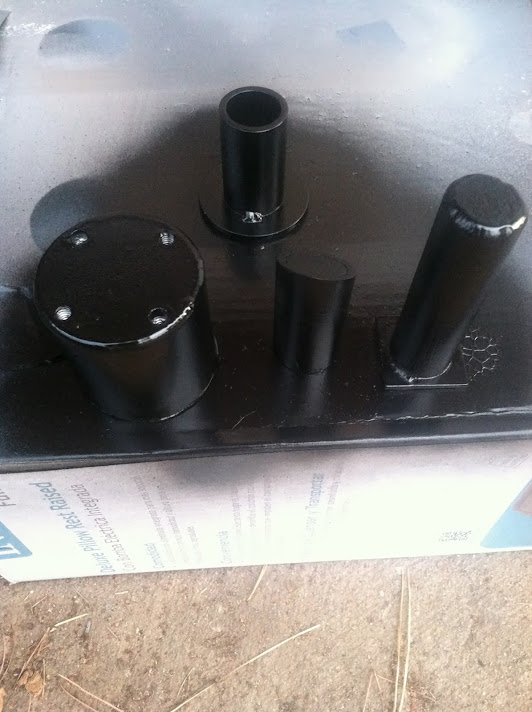 I got my aluminum pack labels in from the new run and they look great! I also got my smc 4mm's painted and worked on the HGA and Iron Arm. 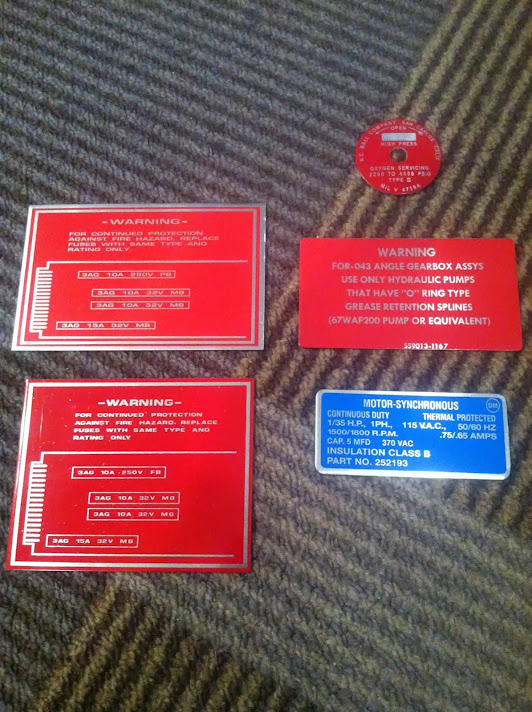 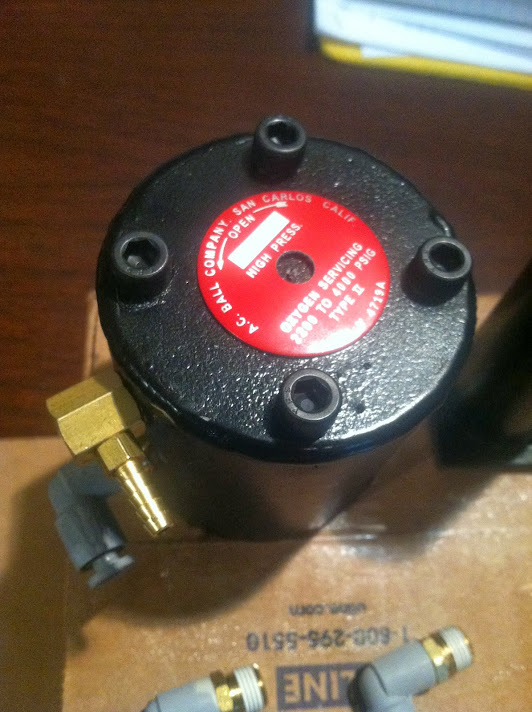 I finally got some more of my dry-rub transfers on to my gun as well has the top knob installed. It took forever to get my 4-40 tap in that I bought on eBay. 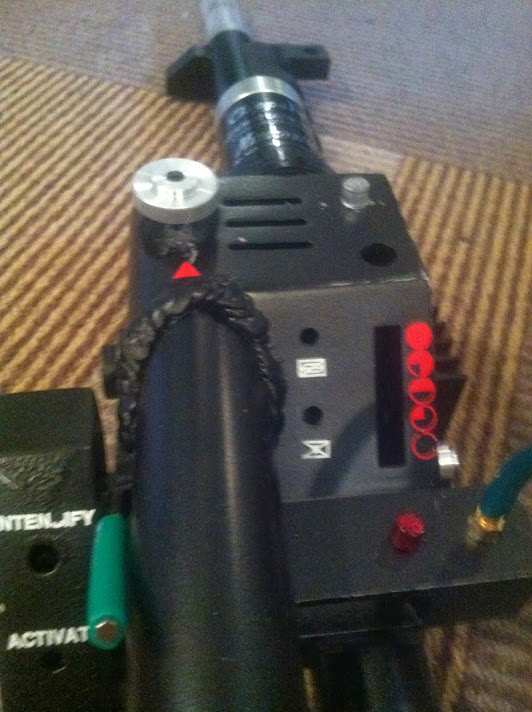 By YHSCraig -  March 14th, 2014, 1:49 pm
-  March 14th, 2014, 1:49 pm#4784738
I finished up working on my ion arm last night. I almost screwed this up about 5 different times. Overall I am pretty happy how it turned out. Some epoxy leaked out from underneath the round resistor (I kept getting distracted watching the news coverage of the missing plane, so crazy and sad?)

I still need to do a little more roughing up of the end cap as well as straighten out the square clippard elbow.
I can't stress enough how great Crix's resin parts are. Great alternative to the aluminum pieces. 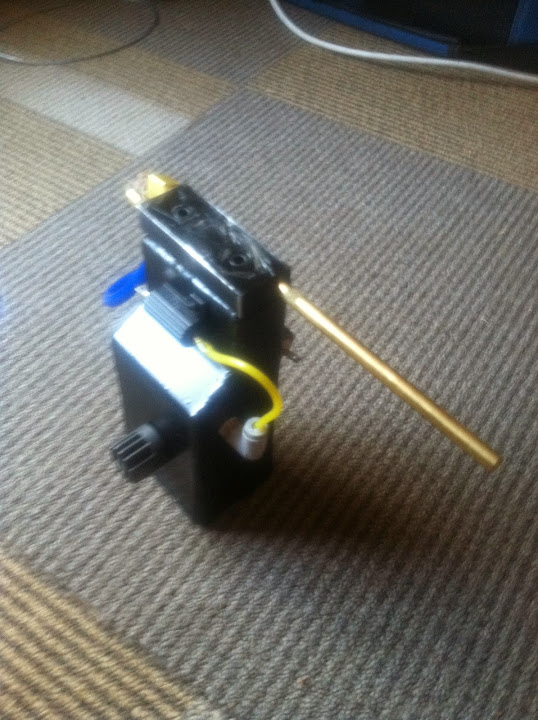 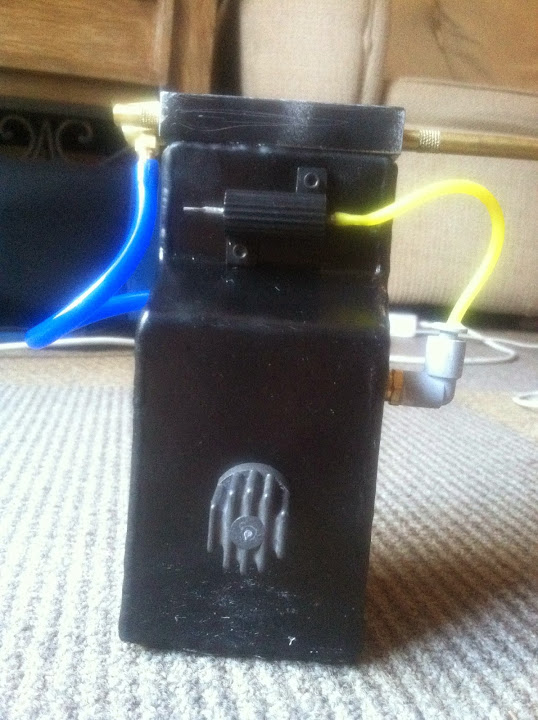 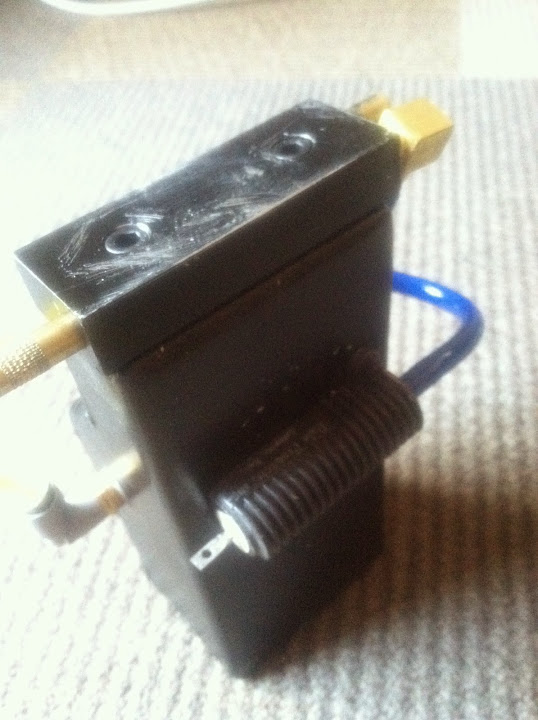 Now maybe I am a complete moron but do the holes in these banjos need to be drilled bigger to properly fit these screws or what? Either way, i test fitted the banjos with some 10-32's I had lying around from my clippard 331 valve. I just want to figure out how to put the correct screws on. Any help would be great.

I know that the screws there on the backplate not supposed to have a nut or a washer, I'll probably take it off, but it's staying for now.

Yours is looking great! I'm waiting on my TC kit right now... Hoping it ships next week! Ah!
YHSCraig liked this

By YHSCraig -  March 28th, 2014, 12:06 pm
-  March 28th, 2014, 12:06 pm#4786957
Yeah they are the ones that just came into the shop. My first idea was to just drill the holes bigger to try and fit the banjo screws in but that went south quickly. I guess I will shoot AJ an email and figure it out. In the grand scheme of things it's really not that big of a deal but I would like to get the accurate screws in there before the packs done. 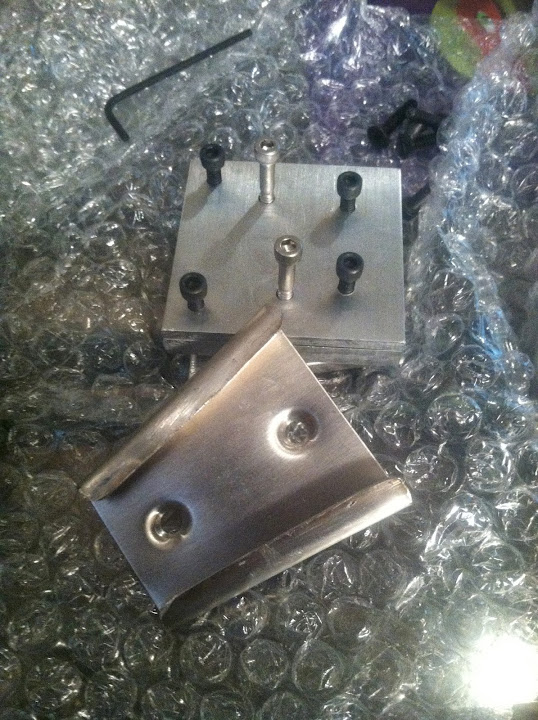 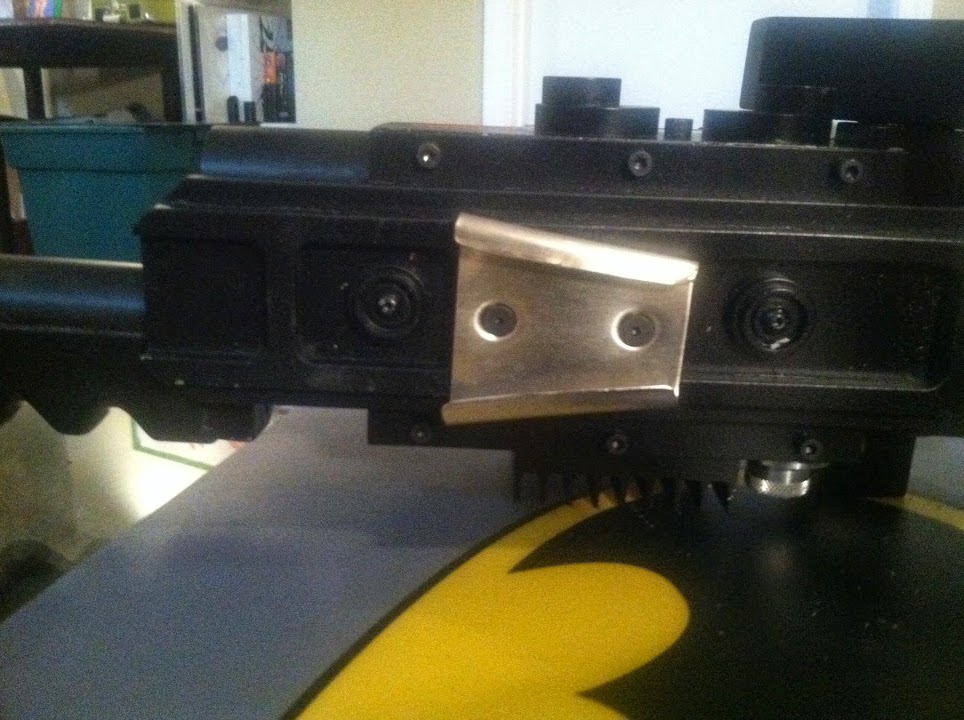 I am slightly annoyed with myself because the v-hook is slightly crooked, and I mean a centimeter or two, on the bottom but I don't think it will make much of a difference when the gun is mounted on the pack. We'll see on that one.


I also got in my bumper and shock mount from KCGhostbuter. Both are really quality parts. I did a light sanding on a few edges of the bumper and went ahead and primed. I am leaving the screen-accurate seam line on the bumper, I think it looks really good. 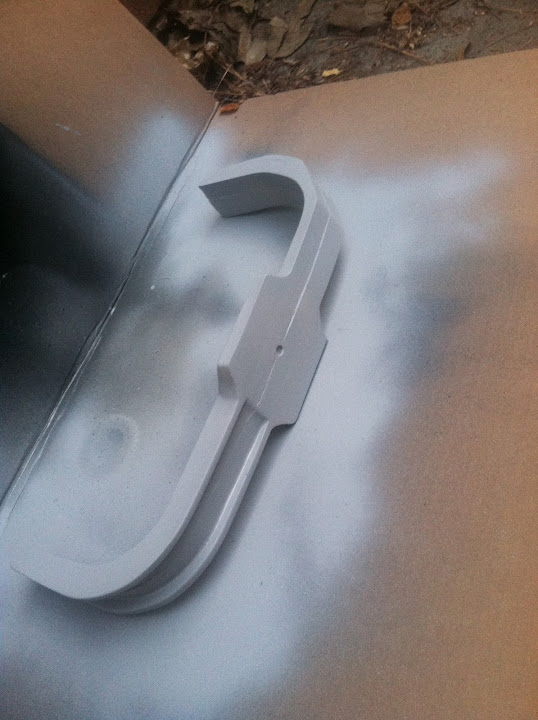 I am really impressed with his shock mount as well! I really wanted a metal one but was having trouble finding one that was accurate/affordable/etc. I went for his resin cast one that came pre-weathered and painted. It looks amazing and I think it was like 15 bucks. I definitely am recommending it to anyone looking for a shock mount. 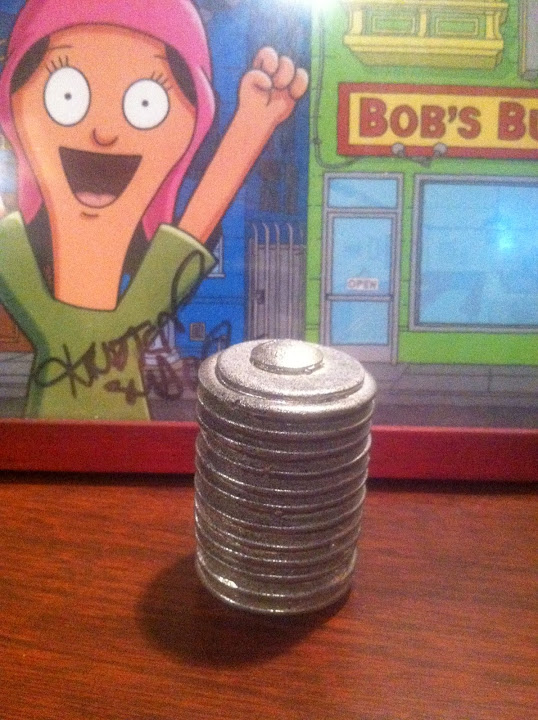 The incomparable AJ Quick sent out my banjo replacements in no time at all! These ones have the proper size holes for the accurate banjo screws and I can't thank him enough for the replacements! Lastly for today, I got my injector tubes painted and tapped with 10-32 holes for the clippard barbs. I know some people use the barbs and some jut feed the tubing right into a 1/4" hole but I like the look of this and I had the extra barbs anyways. 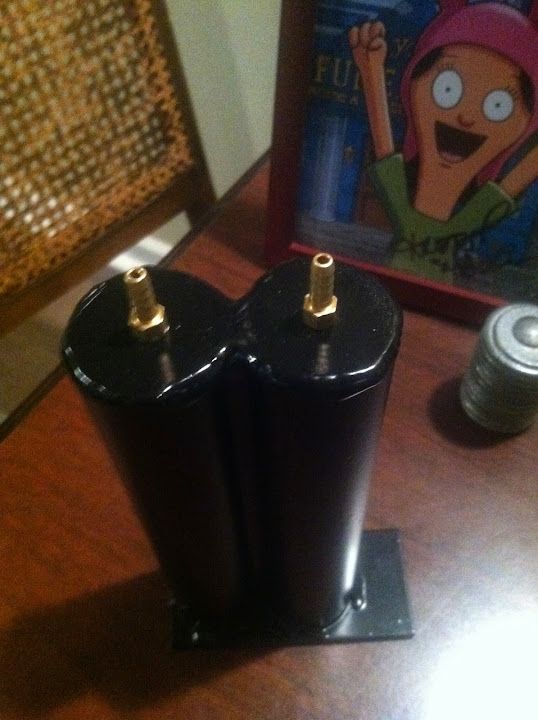 I ordered my LC1 Alice pack and my Clippard 701 from the GBFans shop this week. Shell order is coming next! After that I am planning on ordering Crix's light/sound kit and I should be finished with this thing by June/July hopefully!
rays_occult, Sutton621 liked this
My GB1 Pack Build---http://www.gbfans.com/community/viewtop ... =2&t=36244

By rays_occult -  April 4th, 2014, 9:58 am
-  April 4th, 2014, 9:58 am#4788164
Great job on all the parts so far, the injectors look really good! Yeah I shouldnt worry too much about the angle of the hook on the thrower, it shouldn't be that noticable as you said. You can always plug the hole with epoxy putty and re-drill if it is. Great to see everything coming together!
YHSCraig liked this

Maybe got into why it looks terrible to you?

I think it looks good.

Oh. Hard to get that out of text,

CraigTHEOWL1 wrote:Ha. The dry sense of humors never translate well on message boards! The batman logo isn't screen accurate but if you want one for yourself it's a dollar placemat from Target.

I don't care so much about screen accuracy as I do about being in the ballpark, IE knowing what it is. But cool, I'll take a look next tiem I go there.

CraigTHEOWL1 wrote:Ha. The dry sense of humors never translate well on message boards! The batman logo isn't screen accurate but if you want one for yourself it's a dollar placemat from Target.

That's why you have to use the winky face.

YHSCraig, Sutton621 liked this
If you can read this, you don't need glasses.
Pack Build
Uniform

That would be Lady Hatred's Louise Belcher signed 8x10. It's been watching me build.
rays_occult liked this
My GB1 Pack Build---http://www.gbfans.com/community/viewtop ... =2&t=36244

By YHSCraig -  April 6th, 2014, 12:34 pm
-  April 6th, 2014, 12:34 pm#4788468
I got the bumper painted today and put on my aluminum label! I need a better camera, hopefully will be upgrading from my iphone-4 to at least a 5 sooner rather than later. I should get some better quality photos from that. I attached the shock mount with a 1/4-20 cap head just to test fit it. Once I get the shell I will run a longer bolt through the cyclotron and bumper to the shock mount. 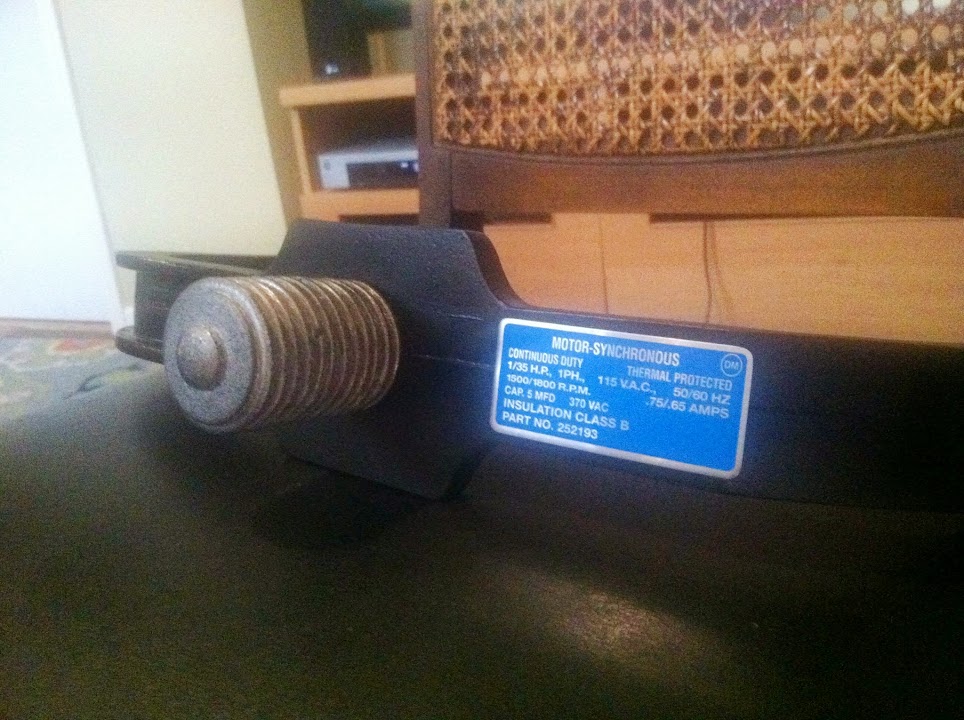 Also a question to anyone who can help. When attaching resin parts (booster tube, ion arm etc.) through a GBFans shell what length bolt/screw should I use. I have a bunch of 1/4-20 X 1" but I am thinking I might need 1 1/2" or longer. Any suggestions would be awesome.
My GB1 Pack Build---http://www.gbfans.com/community/viewtop ... =2&t=36244