My (2nd?) pack build DONE in less than two months!

Aside from giving him a kick ass costume (that he won first place at a convention kids costume contest for), I wanted to give myself some experience with the basics of a pack layout.

That being said, the wife and kids got me my first real pack for Christmas. It's a GBFans shell and it's been in the shipping box since the end of last year. I ordered a Crix resin kit and that was about it. It has been way too cold here in Michigan this winter to be outside doing anything. With a big local convention coming up in May, I needed to get moving and have it done by then for the big reveal. Well thanks to the forced savings account called the tax return, the other day I ordered almost every remaining component from the outside in, including a Matty wand and other electronics, MB, hoses, fittings, lenses, Alice pack pads and such. I'm waiting I the arrival of the pieces, at which time if all goes well, I put the entire thing together. My uniform got completed last fall so at least I have that. That being said, I officially start my build thread. Thanks for all future input.

Right now, all I'm in possession of other than the GBFans shell is a Crix resin kit and the ion arm resistors. Still have to clean up the resin pieces, nothing major. 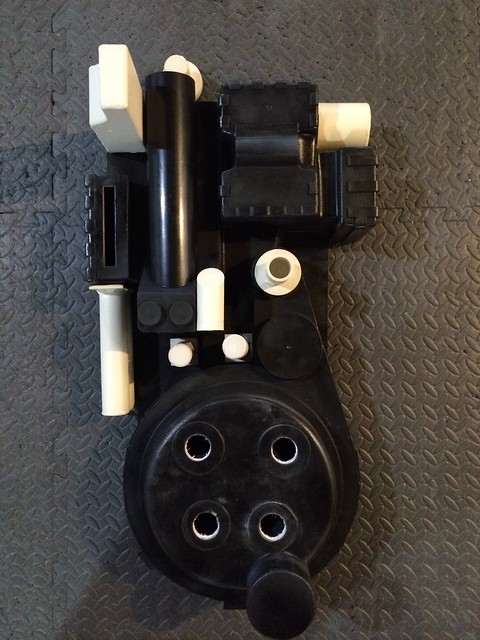 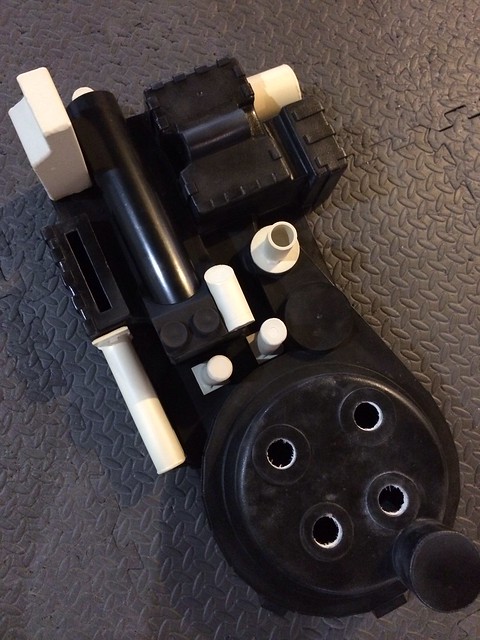 I mistakenly assumed that the dimples in the N Filter were the exact locations where the holes should be, so I started a' drillin. Well, the holes were way off visually, and my drill bit took two HUGE chunks out of the surface. I didn't get any pix of that, but trust me, it was not pretty. Here are the before and after with the filler and sanding process... 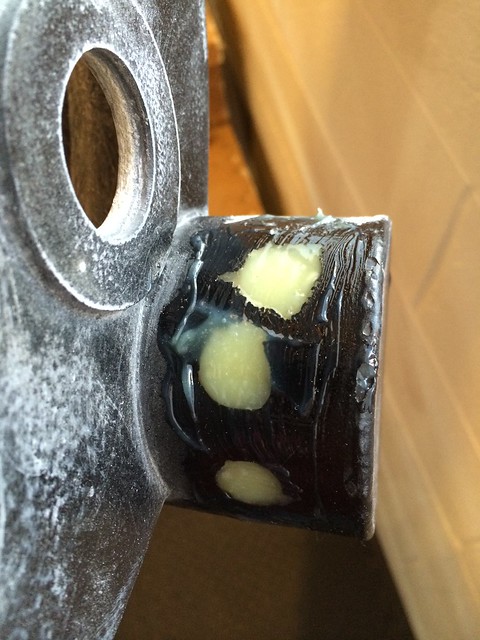 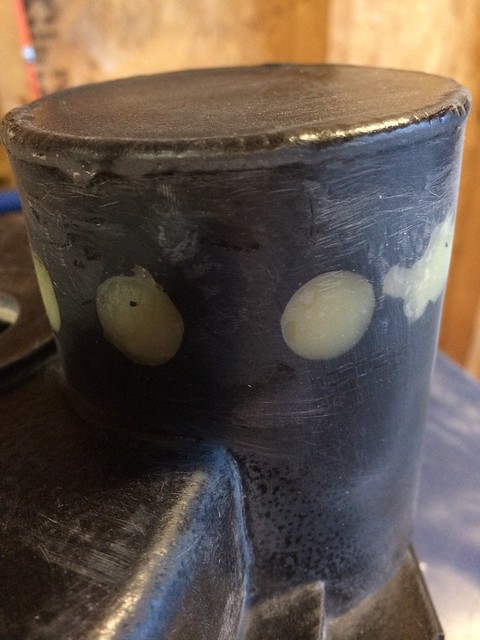 Not a bad job, but a tad more sanding happened after this picture.

I also cleaned up my Crix resin set. 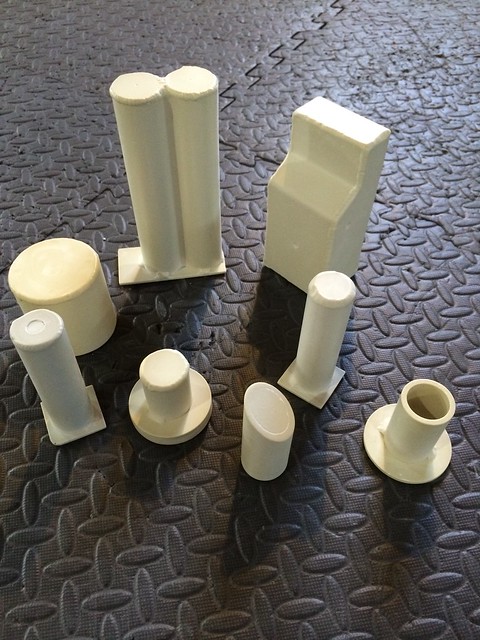 Since I ordered so many parts at once, I got something in the mail almost every day. I tried to order as much as I could from the GBFans site, but some items I had to get elsewhere due to availabilty. Here is my Crix light kit which I later wired... 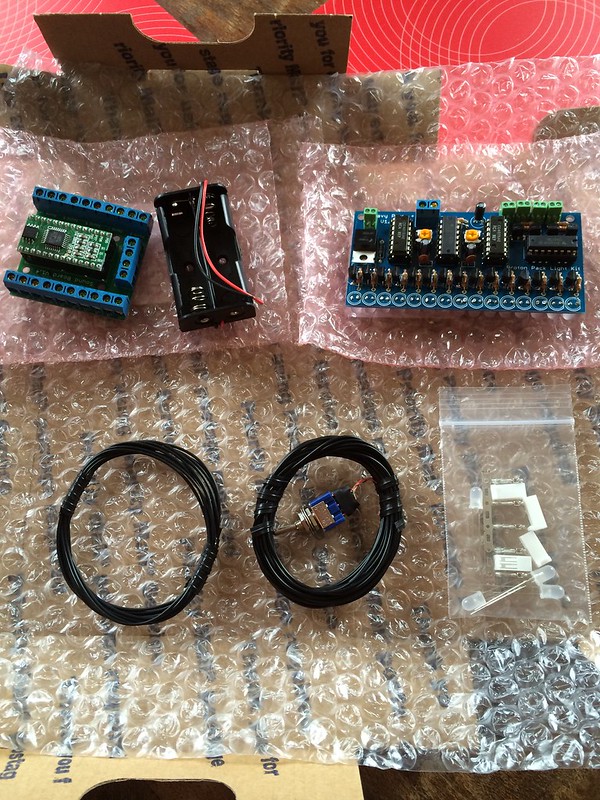 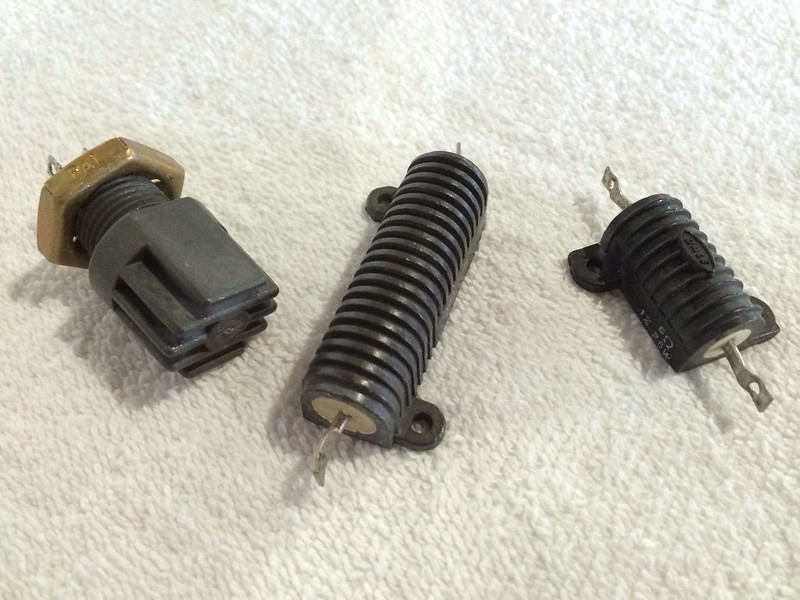 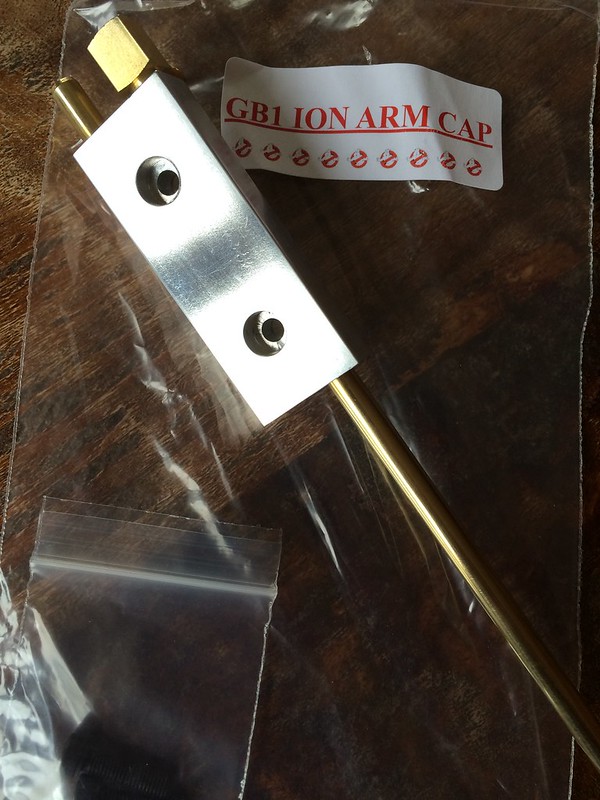 An my pride and joy, which my wife had the nerve to call "a toy". Geez. 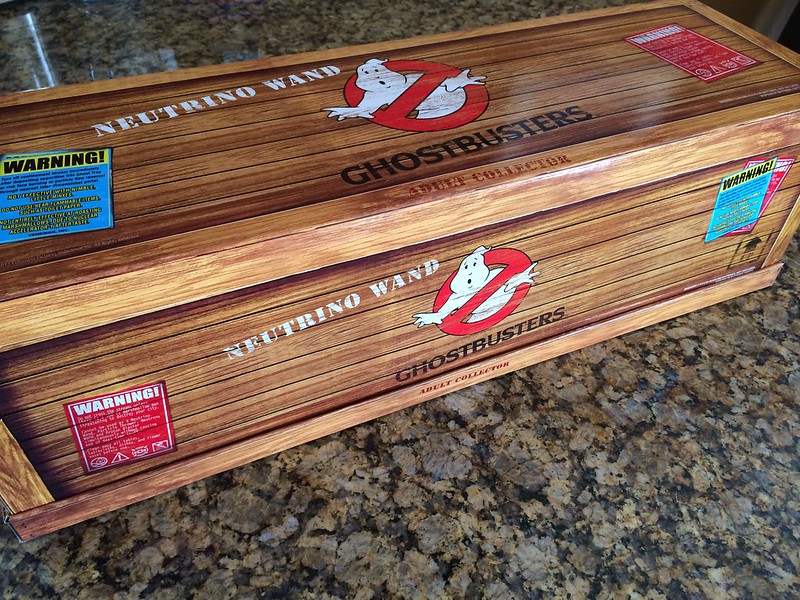 Most of the stuff I ordered before I jumped into my build. Beautiful sight isin't it? I know the straps are wrong, but the accuracy police will just have to deal. 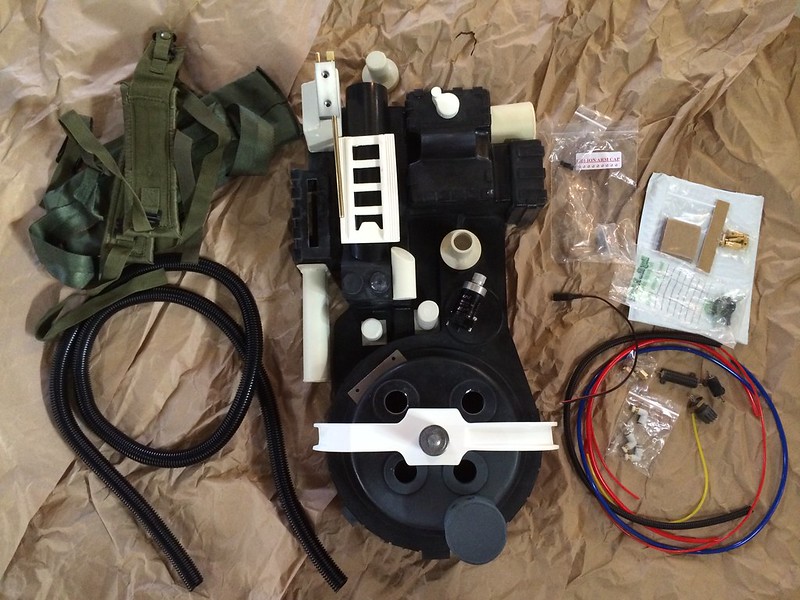 I then began the sanding, priming and painting. I sanded out the annoying seam through the middle of the bumper. Not sure if that is sceen accurate, but I like the smooth bumper better. 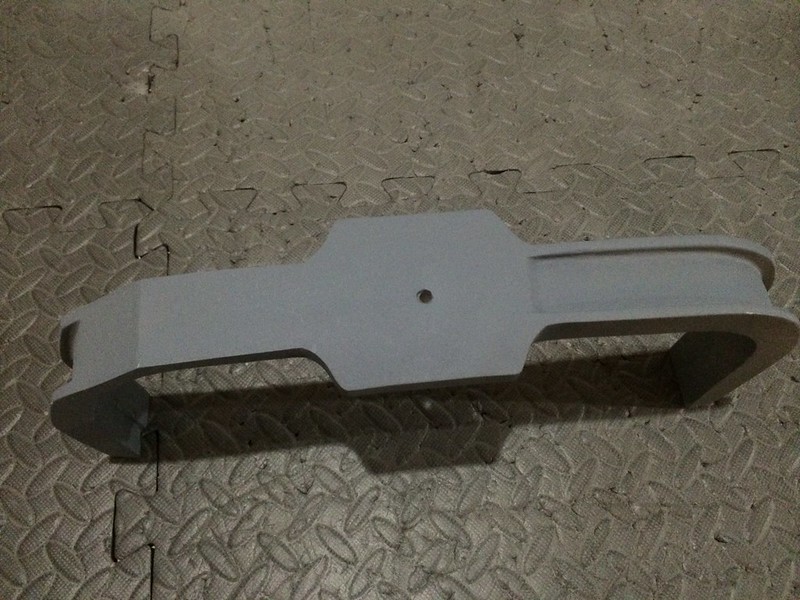 I fitted and then drilled holes for all the pieces that would later be attached. 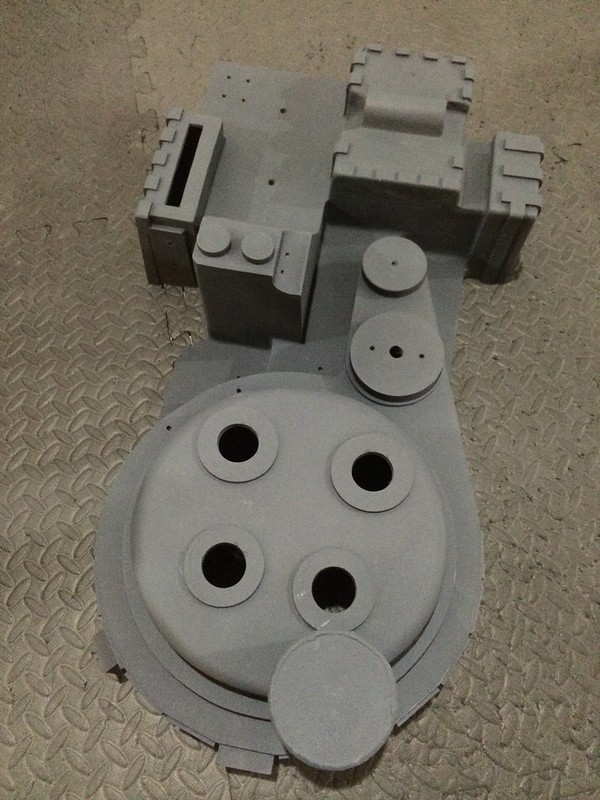 I prepared the shell for painting by taping off areas where I didn't want texture to go after following a tutorial from the forums. 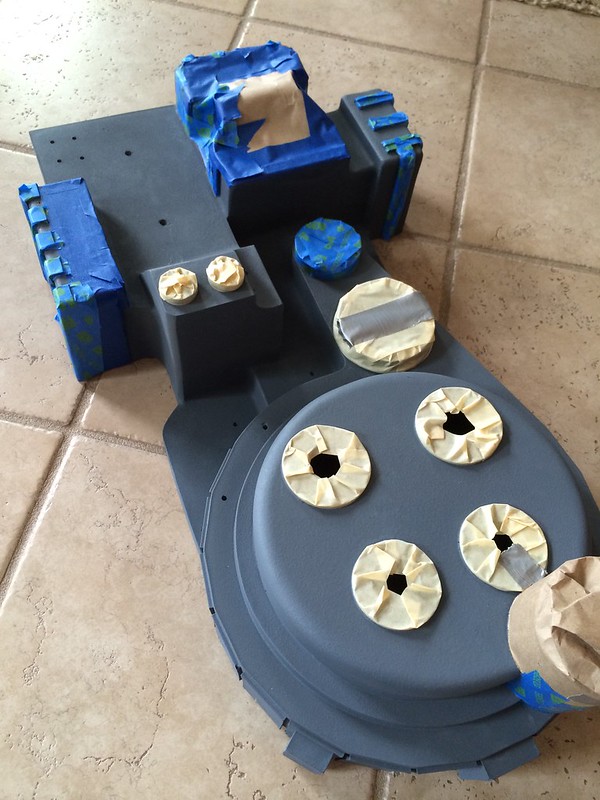 Some priming of pieces. 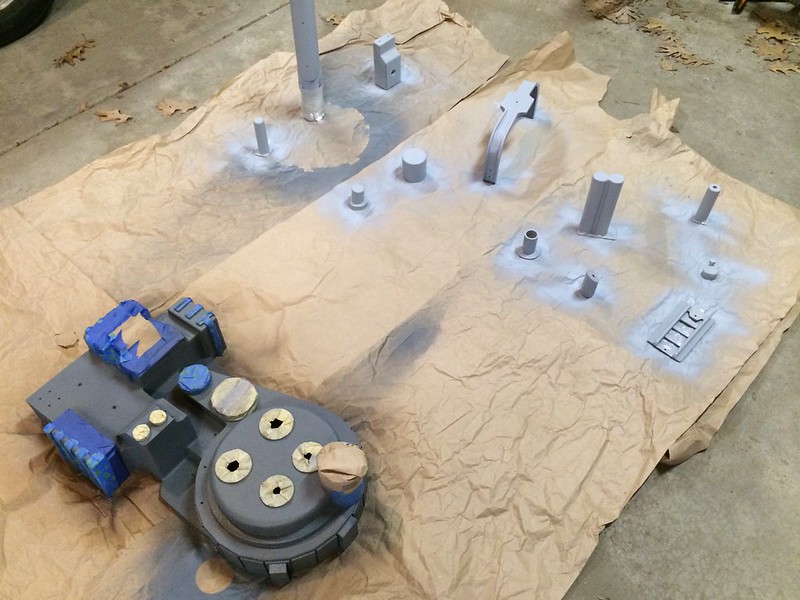 After priming and texturing, I started to attach all of the pieces. Was too excited so I didn't get any before pix of the shell. 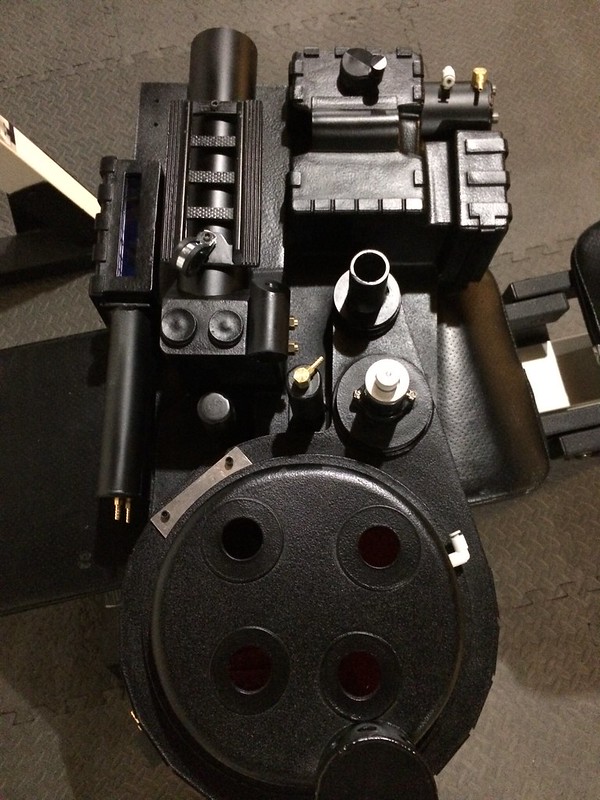 Then I put in all the hoses and stuck the stickers (which are not liking the textured surface one bit). I had to use some spray glue on a few but that is still iffy. 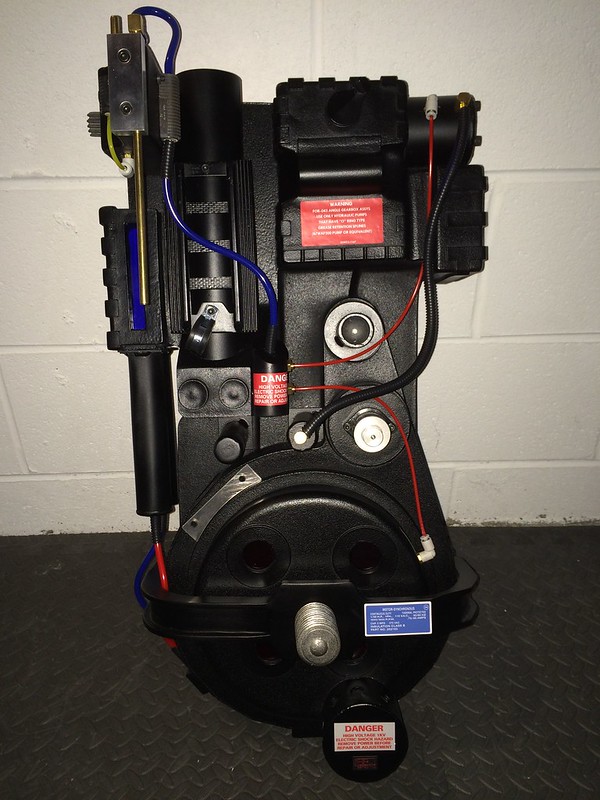 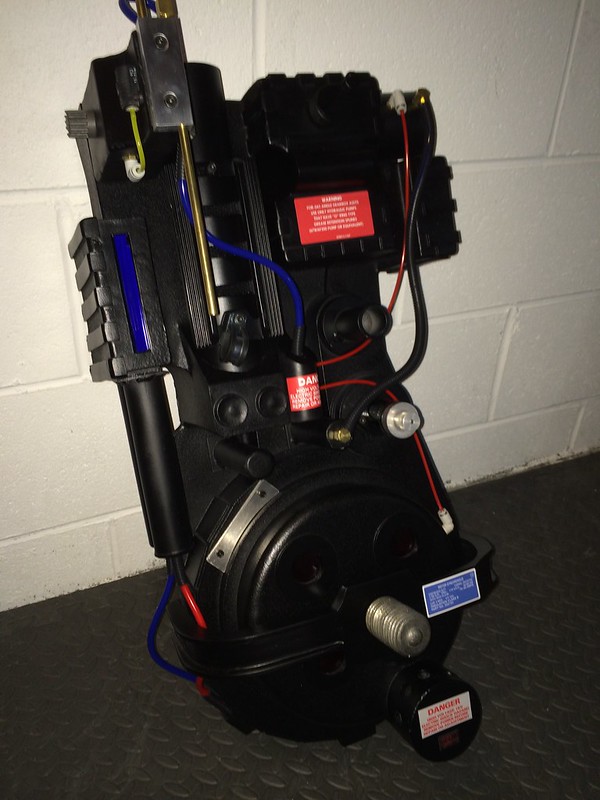 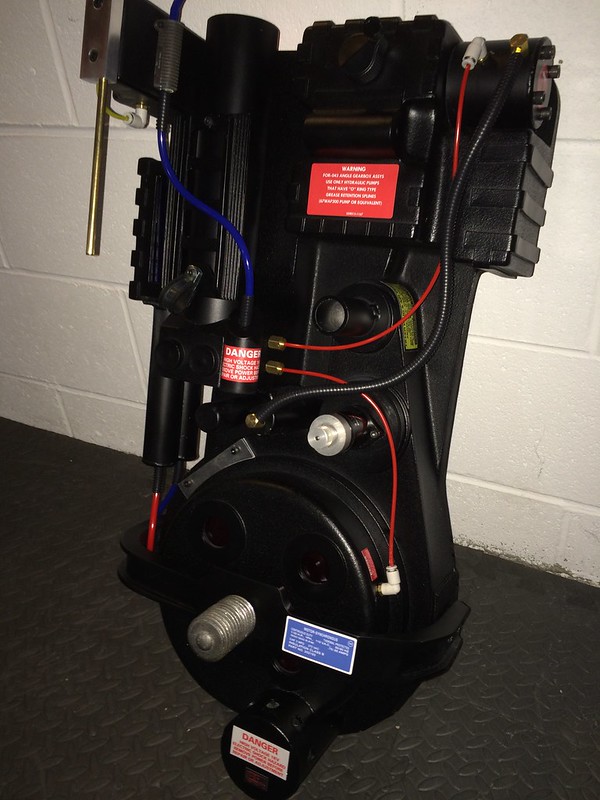 I still have to attach the vaccuum hose and am waiting on my ribbon cable, L brackets for the mother board and my Matty V-Hook. I have to put those pieces together, install the lights and then I am done! Way ahead of schedule.
CraigTHEOWL1 liked this
Motor City Ghostbusters Facebook page:https://www.facebook.com/MotorCityGB

I too don't like the seam in the bumper and tried wet sanding it down but it was extremely slow going. Did you wet sand it as well or do it dry? I've never worked with resin before so I'm not sure how to handle it. I really don't want to ruin the bumper.

Pack looks great! It's no easy feet to get a shell to that stage in such a short time.
n0c00lgamertag liked this
If you can read this, you don't need glasses.
Pack Build
Uniform

Mat wrote:What I did was I started by sanding the seam by hand with 100 grit; once the seam is gone switch to 220. You can even the front out/remove dishing on the flat spots by putting a piece of sandpaper on a workbench or hard surface. While keeping the bumper flat against the surface, sand and check as you go! Prime and sand and repeat until satisfied. Gives a nice finish.

Pack looks great! It's no easy feet to get a shell to that stage in such a short time.

That is just about exactly how I did it. Started with 100, then worked up to 150 and so on and so on. Sanded a bit, then looked where it needed to come down, then sanded some more. I double primed it to help with any super fine scratches and you can't even tell it was there.

Thanks all for the kudos by the way!

I've also weathered the pack with some silver auto touch up paint. I enjoy that portion of the build a lot. I even did the stickers by rubbing them with my finger to lighten certain areas, then I popped the hood of my car and got some grime where I could, and smeared it on the stickers. I waited a bit and then dabbed with a dry cloth. 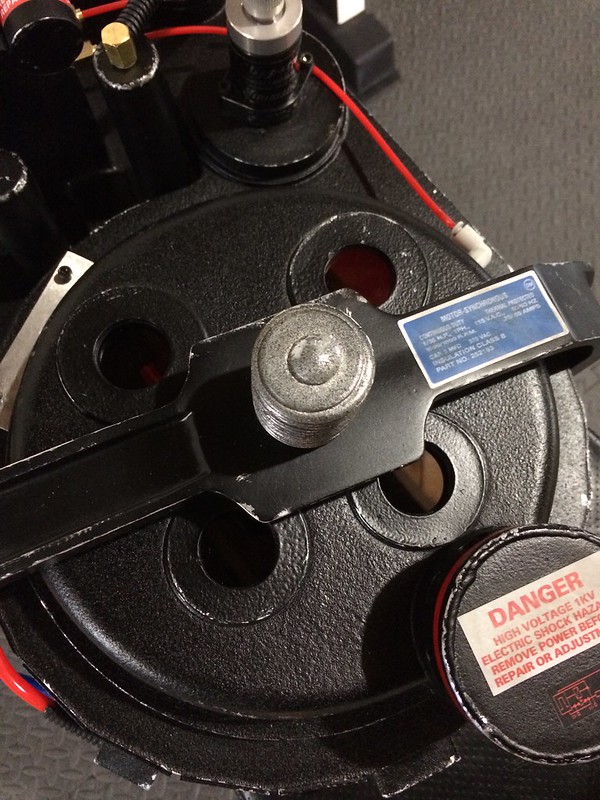 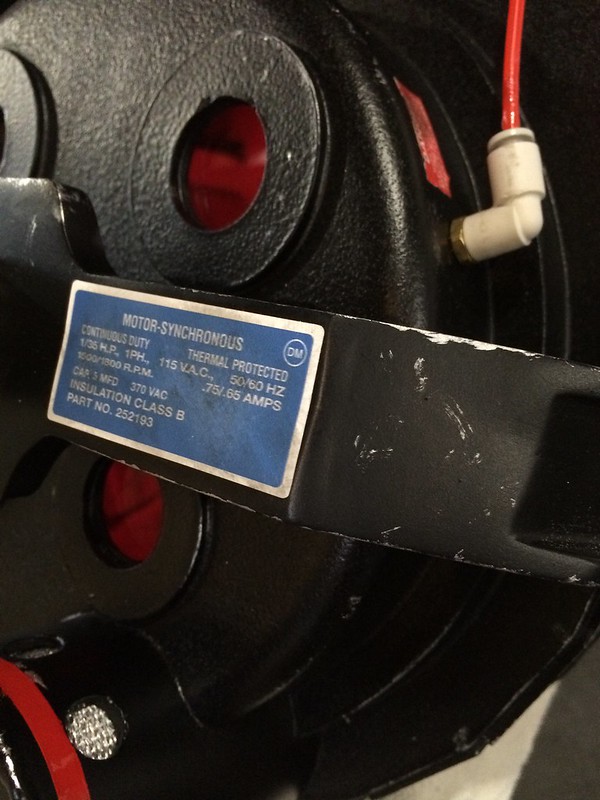 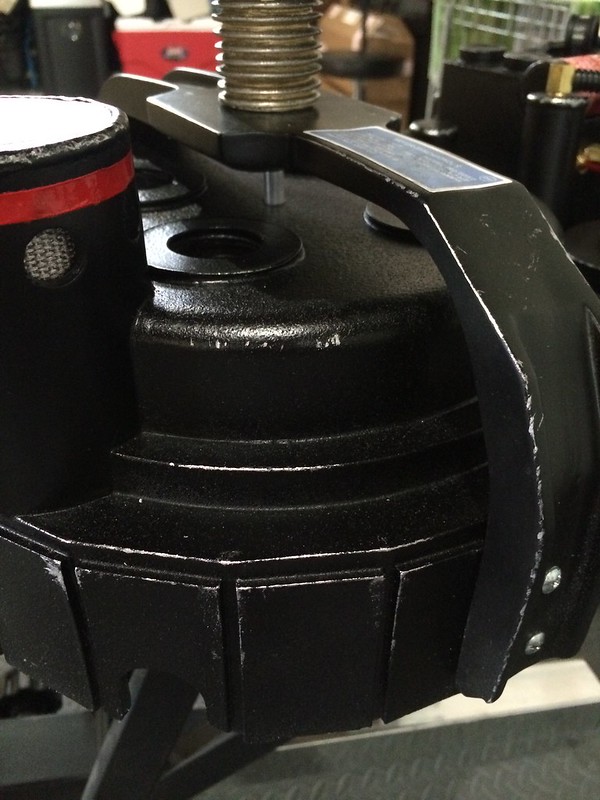 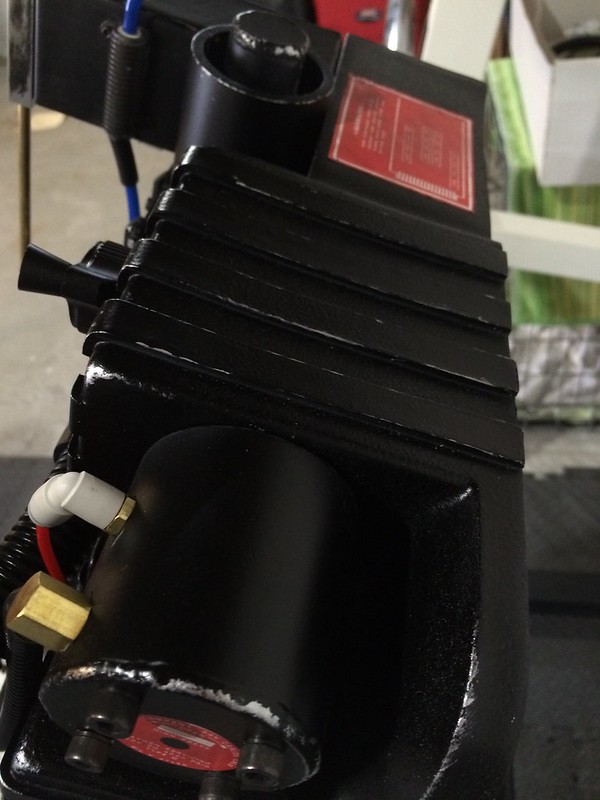 By Master Taran -  April 14th, 2014, 4:44 am
-  April 14th, 2014, 4:44 am#4789575
Your car grime approach looks like it worked extremely well on those labels. I'll have to remember that for my build.
For those of you following along at home, don't forget your...subatomic house?
You see that? I am a professional; the ceiling is now on fire, and I'm not worrried.
Well, that does it for stupid snake...FACE.
Return of the Ghostbusters
It's my timey-wimey detector. It goes bing when there's stuff.

Nice job on the weathering. Its nice and subtle and the damage looks realistic. Its a shame when someone builds an amazing pack and then goes overboard with the silver paint and ruins it.

Master Taran wrote:Your car grime approach looks like it worked extremely well on those labels. I'll have to remember that for my build.

Ditto. Never even occurred to me.

I've been hard at work with the pack which is just about done. Actually, it is all done.

Took a few pics at the end of my build. Here is my electronics setup. It's a Crix set and that inexpensive amp that was for sale on the forums. Two Sony 6 1/2 speakers. Aux jack goes out the back and battery is mounted outside for charging and maintenance. 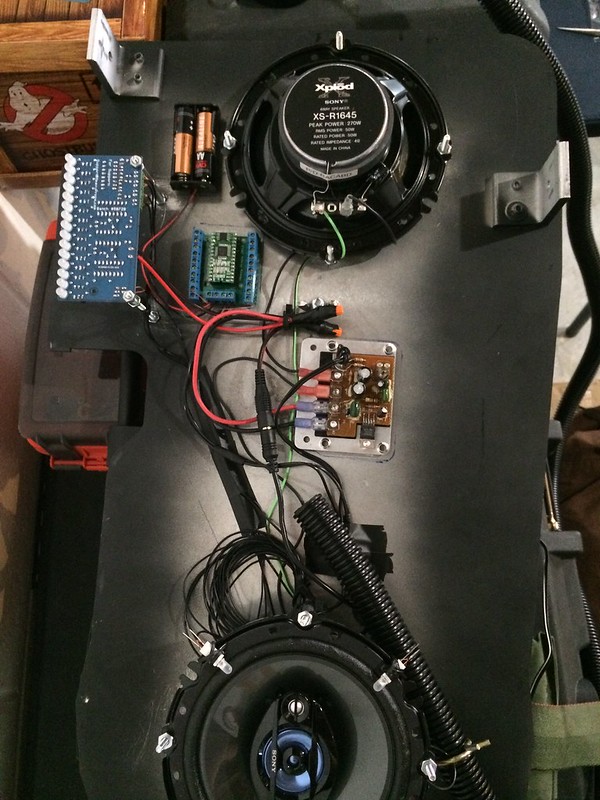 I attached a small washer to clean the lines where the ribbon cable goes into the pack. 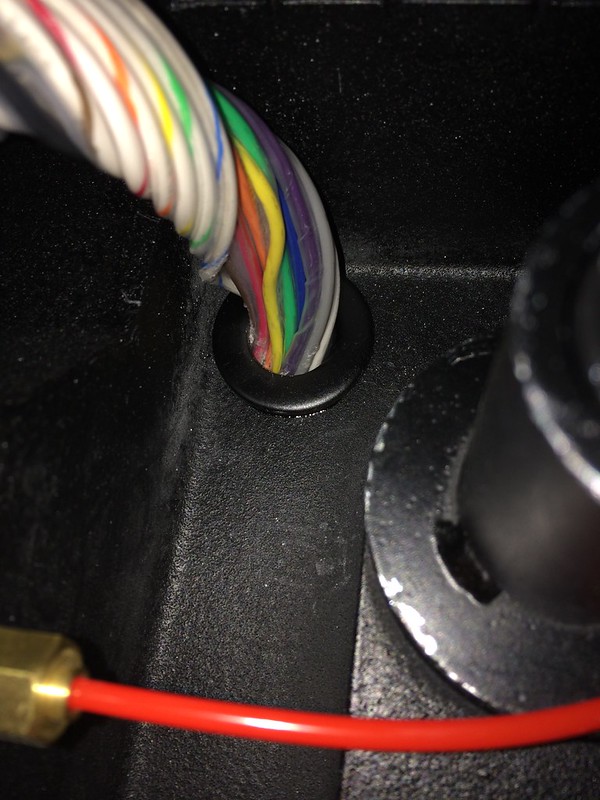 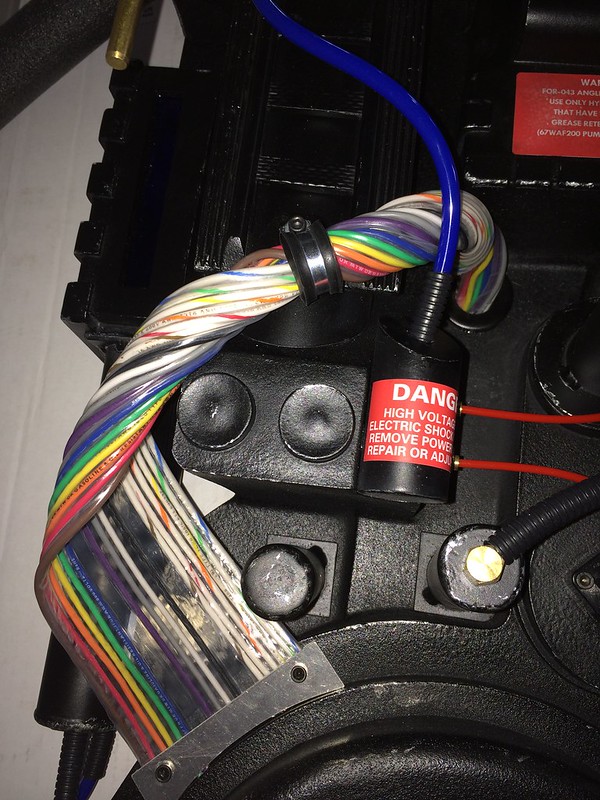 My straps and neck padding... Went with zip ties and electrical tape. You can see my top speaker holes here also. I know my straps are wrong... 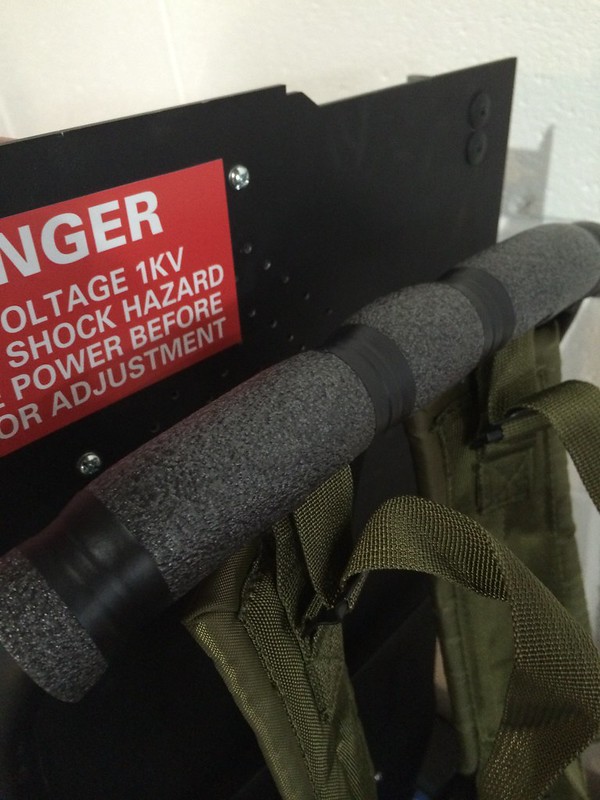 And finally, the pack and Matty thrower. 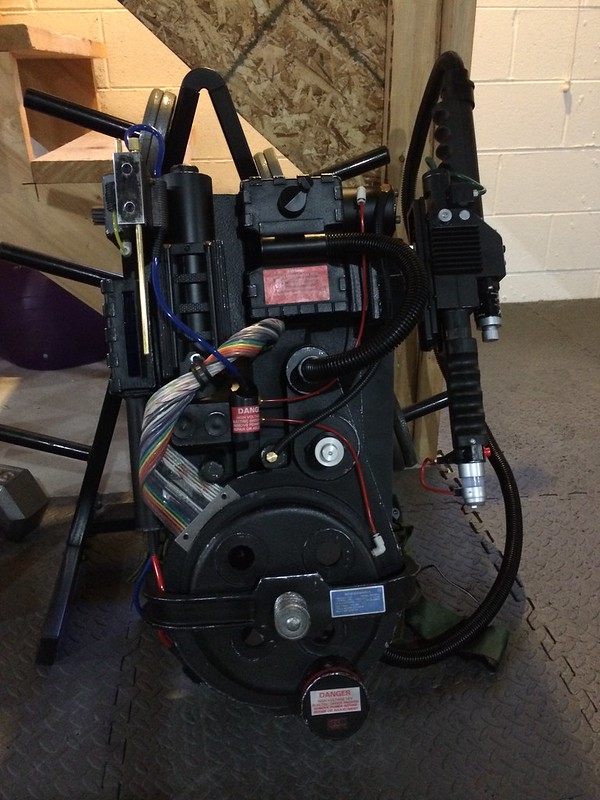 All in all it was fun. Although I have several other costume builds under my belt, this was very challenging. I look forward to my next one some day.

Thanks for looking. Happy busting.

They're a business, their whole model is to make m[…]

Finished pedal and trap, also some pics of how I m[…]