What are those cyclotron "dimples" for? I'm doing research for my first pack build and I've not seen them on any reference pictures I've seen yet.

These are the "dimples": 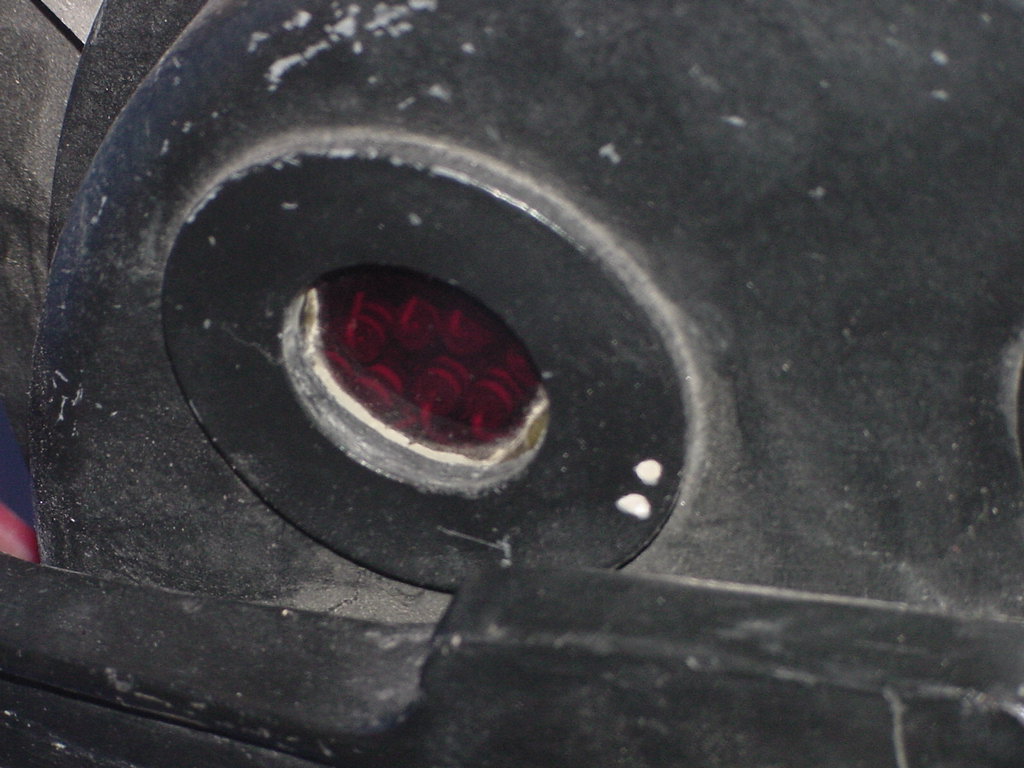 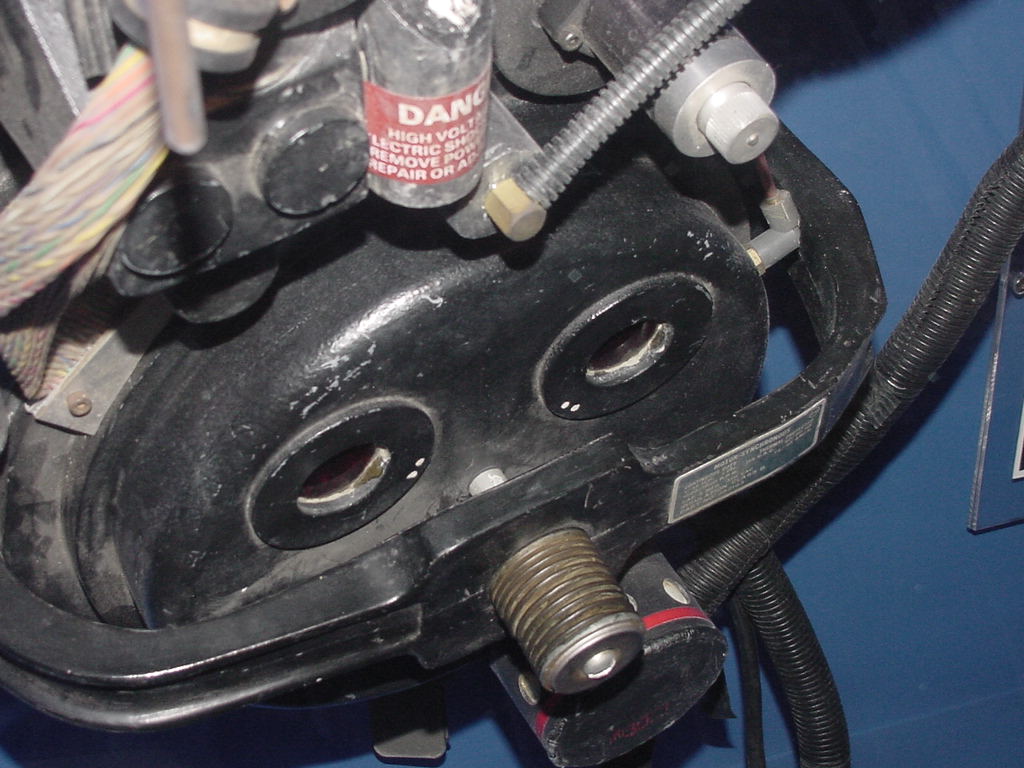 There's a set of them on each ring surrounding the four red lights on the Cyclotron. As far as we've been able to speculate this is a lingering trace of an earlier Proton Pack assembly option, possible a plate mounted on the spot in place of the familiar Bumper.
What would Ryan do?

-  October 28th, 2019, 2:13 pm #4926294
I'd have to go through the reference gallery again, but I'm reasonably sure it's visible on the fibreglass semi-hero GBII Pack that used to be on-display in Sony's Burbank headquarters, as the semi-heroes were cast from a fibreglass GBI Proton Pack.
What would Ryan do?

Venkman's Pack had various spots filled in to make the mold for the GBII semi heroes. That's what you see in the above picture, and why they're white. That's the only pack that looks this way. You can see the remnants of them in the GBII castings.

Wow, sounds like a lot of variation. So only the semi-hero packs had them? Were they not on any of the hero packs from GB1 or 2?

The Venkman and Spengler Hero packs definitely had the holes, while the Super Hero pack does not; it's unclear as to whether or not the Stantz and Zeddemore/Omni Hero packs had them as well. Since the GB2 semi-hero packs were cast from a mold made from the Venkman Hero pack, those packs all have the clayed-up holes cast into the cyclotron rings. Here's a better view of the placement of said holes on the Spengler semi-hero pack for anyone interested in recreating them. 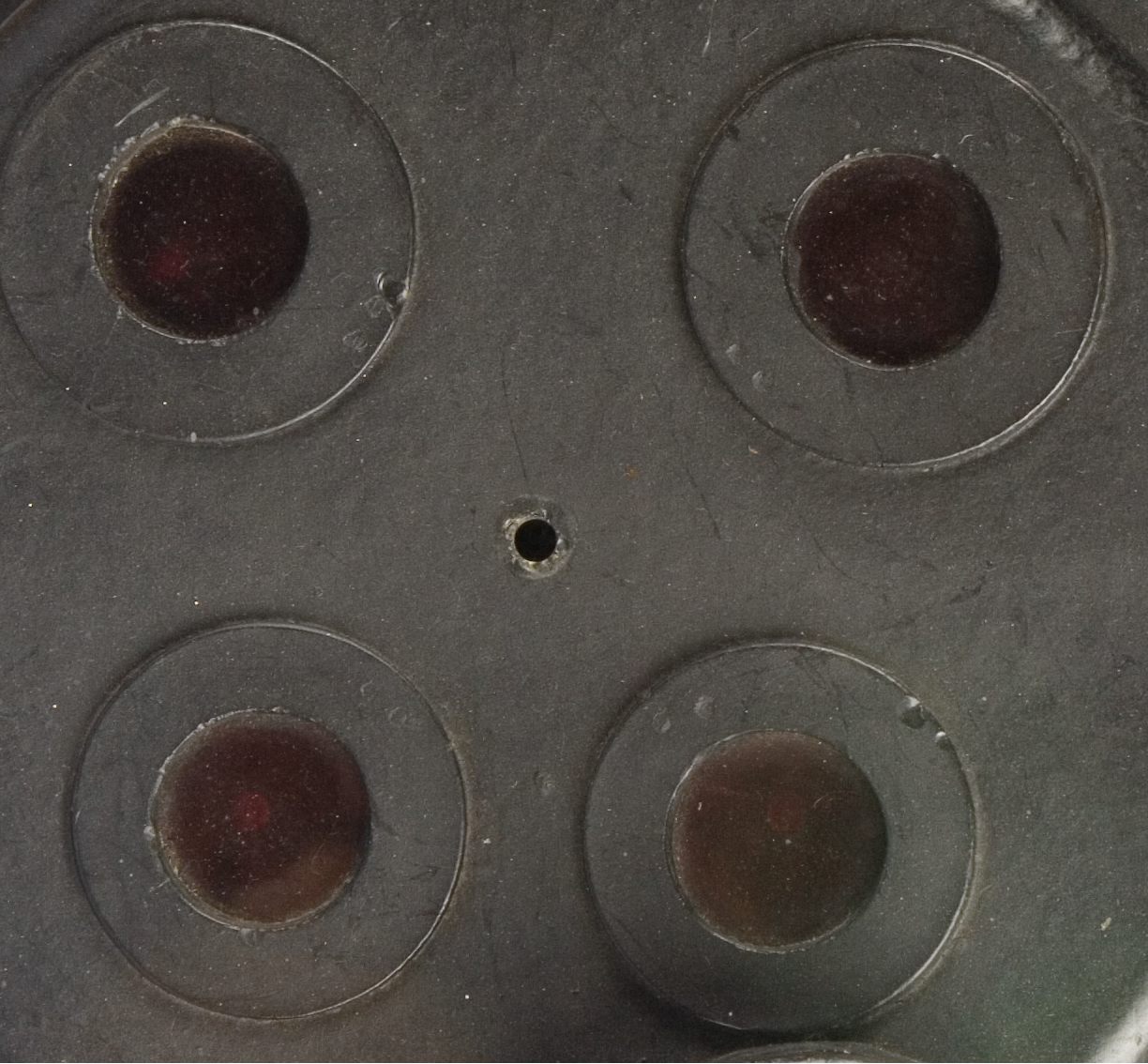 Wow, I didn't even notice the dimples in that picture until I looked closely, and that's a super closeup lol. Maybe I just overlooked them in the GB2 reference photos I was looking at before. How many different packs were made for GB1 anyway? Hero, Semi-Hero, Super-hero, Stunt, any others? How many of each? Just trying to understand all this wonderful prop work lol.

Here's a better view of the placement of said holes on the Spengler semi-hero pack for anyone interested in recreating them.

Where'd that photo come from?
What would Ryan do?

And what about the “super hero” that was mentioned?

The Super Hero is one of the five mentioned. That one received the same cosmetic modifications the other GBI Heroes received.

It was the only Pack to have a Proton Gun that was fully animated. The others only had static bargraphs.
A couple of smaller unique details are that the Super Hero is also the only GBI pack to have an orange recessed hatlight, and to have black paint on some of the knobs on the heatsink side.
Demon Vice Commander liked this
What would Ryan do?

Also, is there a known number of stunt packs, or is it just known that there were several of them made? They were cast with rubber shells right? So is any pack made with a fiberglass shell either a hero, semi-hero or super-hero?

-  October 30th, 2019, 11:56 am #4926373
Because of their appearance during the earthquake, the final battle with Gozer and the aftermath, we can conclude there's at least four foam stunt packs as each Ghostbuster is wearing one (and it's likely one of these was worn by Bill when he was rolling around on the floor after getting slimed). Whether there were any more is open to speculation. These are easily identifiable by the flipped Ion Arm (see below - top image), the static lights, the very different style of straps (see below - middle and bottom images), and the absense of a metal A.L.I.C.E. frame (observe the Packs worn by Ernie and Harold in the bottom pic, they're wearing stunt packs.): 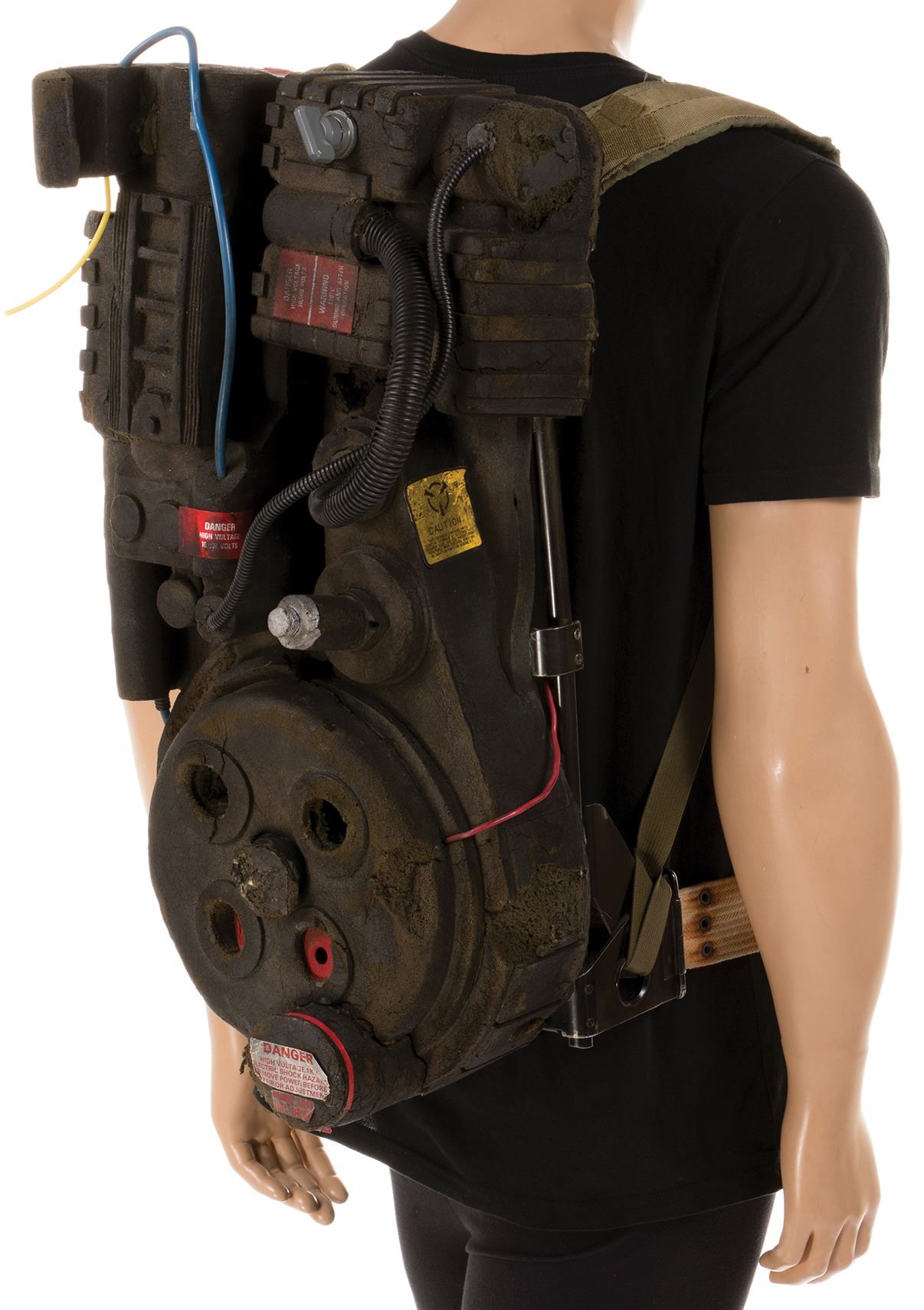 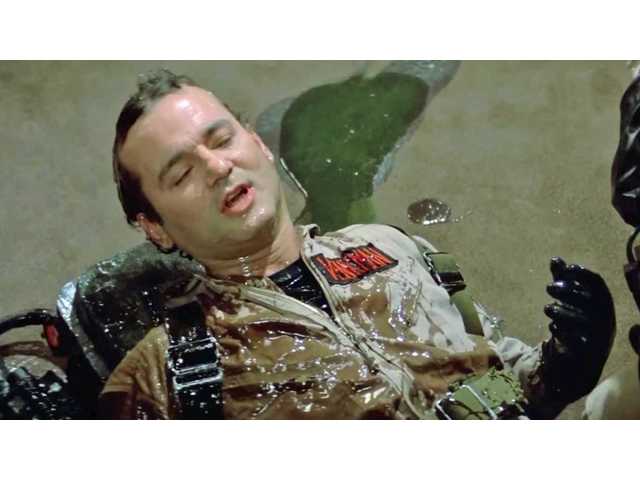 -It should be noted that the GBI stunt pack pictured in the first photo appears to have had a refit at some point, which has given it an A.L.I.C.E. frame.

Another shot of the stunt packs:

In comparison, the stunt proton Packs used in Ghostbusters II have fewer cues to easily work from: the Ion Arm is identical in orientation to the semi-heroes and hero Packs, and they appear to have been equipped with A.L.I.C.E. frames.

Because they look so much closer to the non-stunt packs, it's not as easy to work out where they show up in the film, though it's reasonable to assume the packs worn by Bill and Harold when they've been zapped by Vigo are stunt packs.

So that's at least two stunt packs we can make a safe guess of (I'm willing to stretch that to four, but it's less easy to prove with any degree of certainty.

One of the stunt packs from Ghostbusters II has been spotted a couple of times in the wild, it first appeared in an auction a few years back (some photos of it here), and it eventually entered the collection of the Museum of Pop Culture: 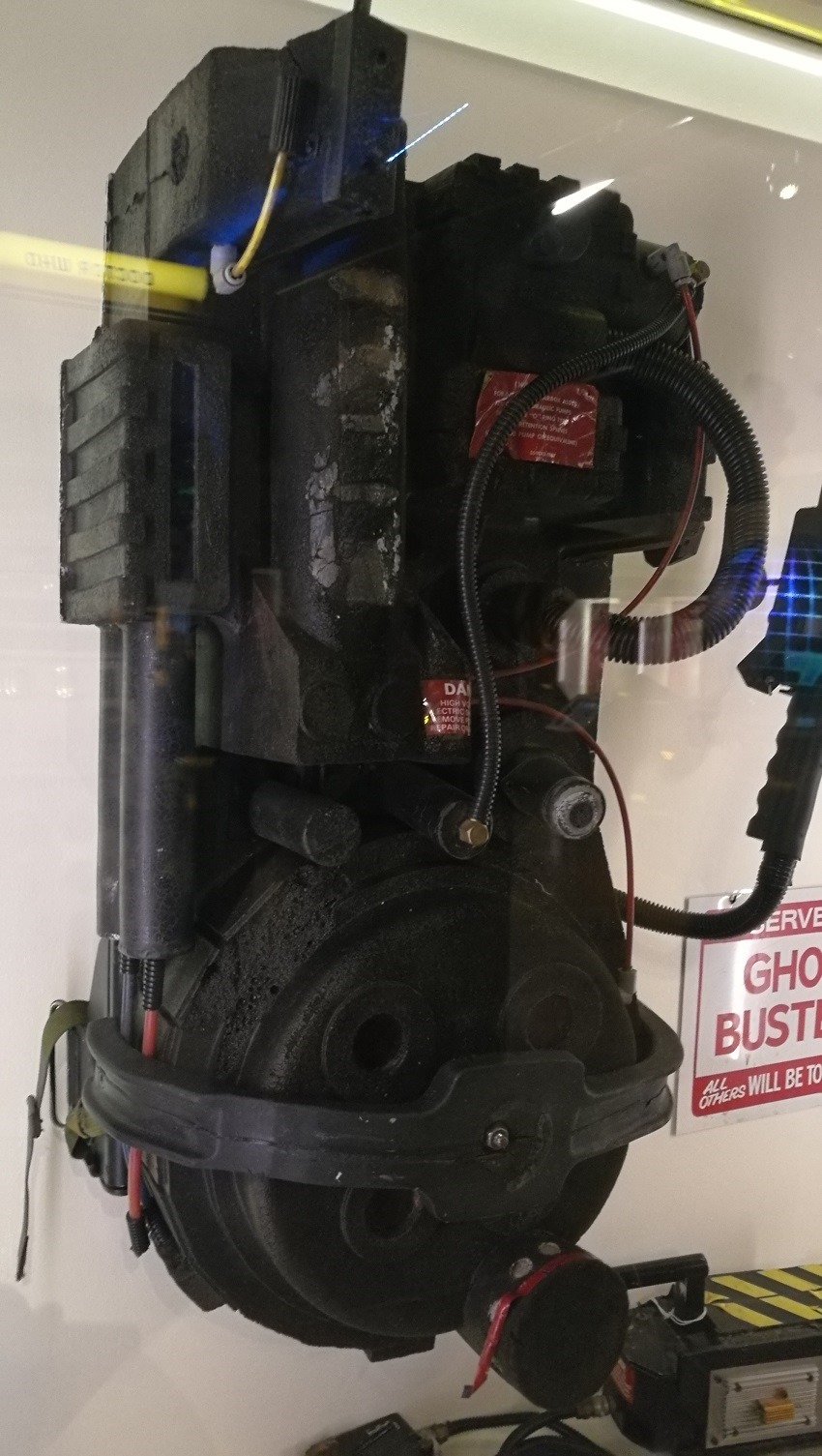 What did you use to paint the shell, the same Satin Canyon Black you used on the metal parts?

Thanks so much! This just made my day!

Very cool! Thank you for sharing that link, I hadn[…]

To borrow from the native tongue of a neighbouring[…]