To begin, I haven't had much luck with the 3D printed red circuit diagram thing. Simply not enough fine resolution from my FDM printer to make it really work. So I'm going with the GB2 "sticker" approach, which is fine for now. Perhaps someday I'll find a cool way to replace it.

Overall, though, cosmetic stuff is great. Here is the current state of the pack: 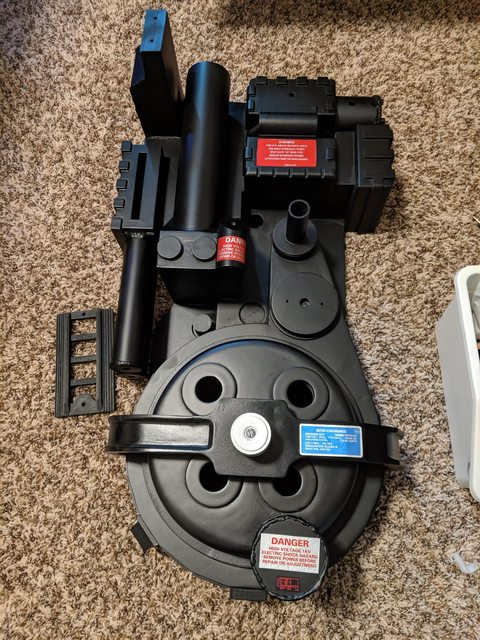 Overall I think it's looking great. I am using my crappy yet oh so good and oh so affordable aluminum label method. Personally I think it gives amazing results for the price, and as I mention in the video it could likely be improved with a better adhesive. And if you do it just right you can get your aluminum applied without imperfections, but I'm not too picky. I love how forgiving proton pack builds can be! I've used the labels from this thread this time, and I like the results!

I've started working to get a few other parts together. As I'm trying to do this on a budget, I have decided to 3D print most of the hardware that goes onto the pack. Here are some parts in various states of progress I'm working on: 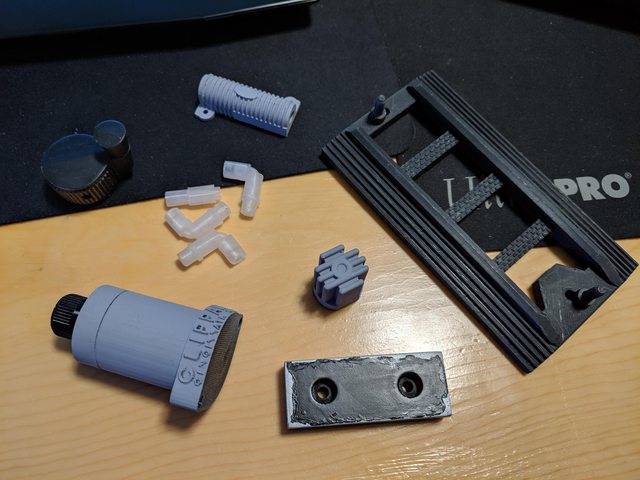 I'm trying to decide whether I want to keep the crank knob black or go with gray. As I'm mostly doing a GB1 pack, and I like the contrast of it, gray is probably a better choice. Also, the legris elbows I printed turned out SUPER clean. I'm using this file for my brass elbows, the legris elbow from this page, and the legris straight file from PakRatJr's plans. Hopefully painting goes well, but we'll see. I'll post updates on that when I get around to the painting part. If things don't go as well as I want them to, in the future I may swap them out for more accurate parts.

Finally, on to the electronics. The current design I have involves two arduinos: One that resides in the particle thrower, and the other in the main pack. The two will be connected using I2C, and I think I'll have the thrower be the master and the pack be the slave. I'd also love to have, at the end of the loom tubing between the pack and the thrower, an xlr connector that will allow for the thrower to be removable, allowing me to use the same thrower for multiple packs in the future if I want, or even disconnect the thrower and use it on its own. Since all I need are three wires between the two arduinos, this seems totally possible, though I'm not sure how to handle the separate power sources in the thrower and the pack itself. I suppose that's the downside: I'll now need power AND audio in the thrower when that isn't entirely necessary when the thrower is permanently connected to the pack. There's just something cool about being able to pop it off when I want to!

Anyway, if I do go the I2C route, I will have it so the thrower's arduinos keeps track of the states of the buttons and toggles on it, and depending on what state things are in, it sends integers over to the main pack letting it know what state things are in. State 0 for booting up, state 1 for normal cycle, state 1 for firing, state 2 for ghostbusters theme song, etc

We'll see how it goes, I'm going to start tinkering tonight with the idea and see how easily I can get it up and running.
PakRatJR liked this
My Modded Spirit Halloween Trap!
My 3D Printed Proton Pack!

And great job by the way! I just started printing my neutrino wand and I look foward to print the pack.

So last night I was looking into the size of my Legris elbows, and they are super small. Not sure if they are scaled down, maybe for a Spirit Halloween pack or something, so I scaled it up and printed it out and sure enough, the size is totally different. Now I'm really uncertain if I have the right sizes for everything!

Here is the diameter I have of the main body of the larger scale Legris elbow I printed (~11 mm): 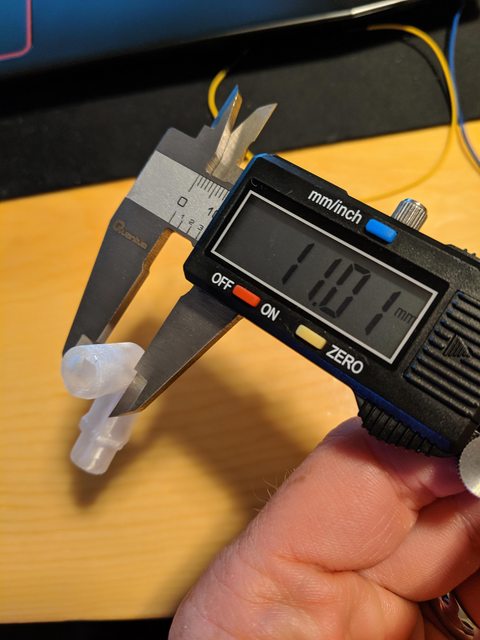 Here is the base diameter (not threaded) of the larger scale legris elbow I printed (~9.75 mm): 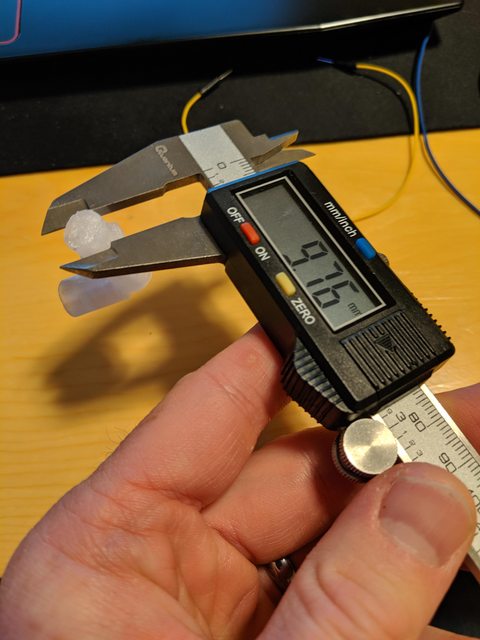 Now some measurements of the brass elbow (4mm seems right for the barb, right?): 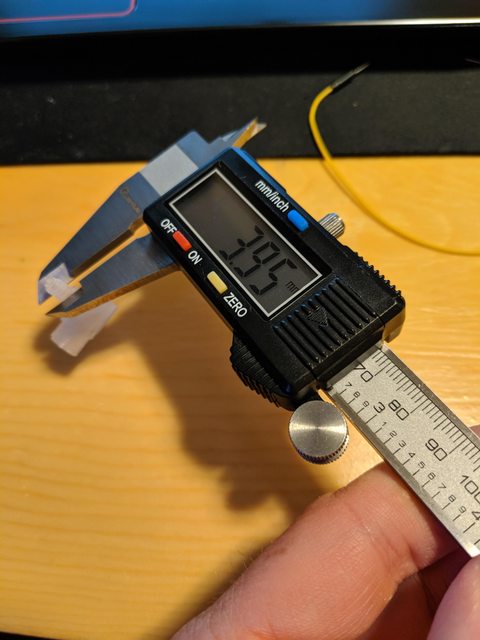 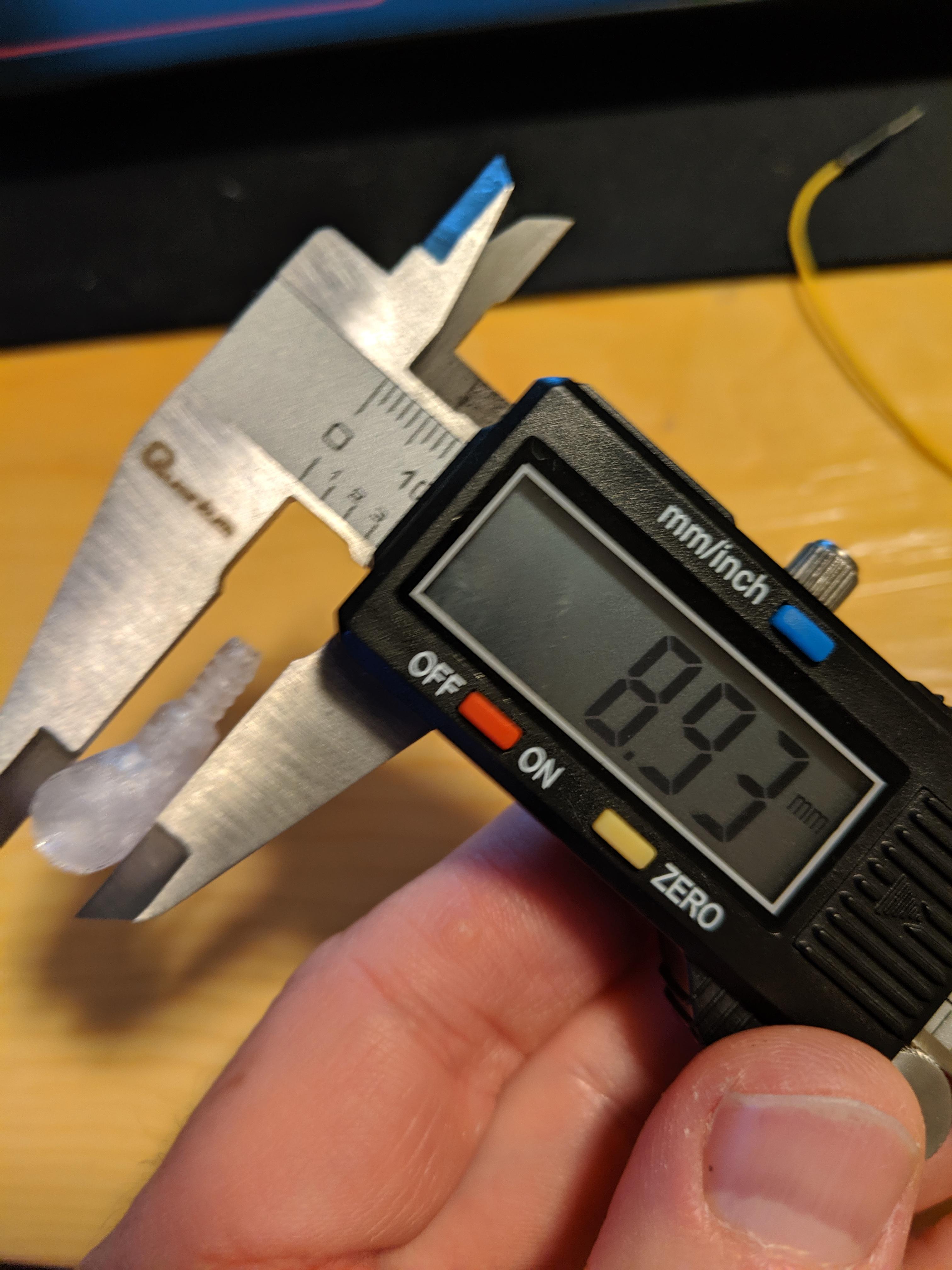 And finally the straight legris connector: 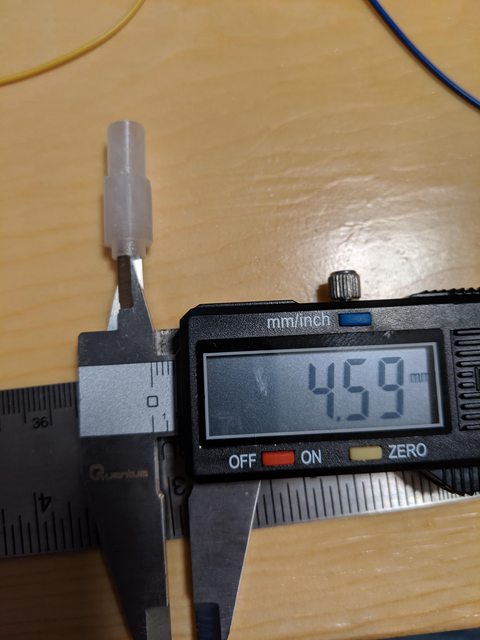 And here they all are together, with the smaller scale legris elbow on the right: 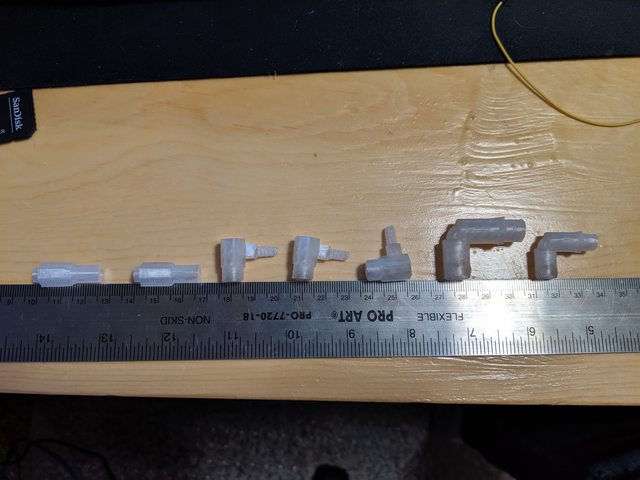 So if anyone can provide any insight into how accurate these dimensions are, please let me know!
My Modded Spirit Halloween Trap!
My 3D Printed Proton Pack! 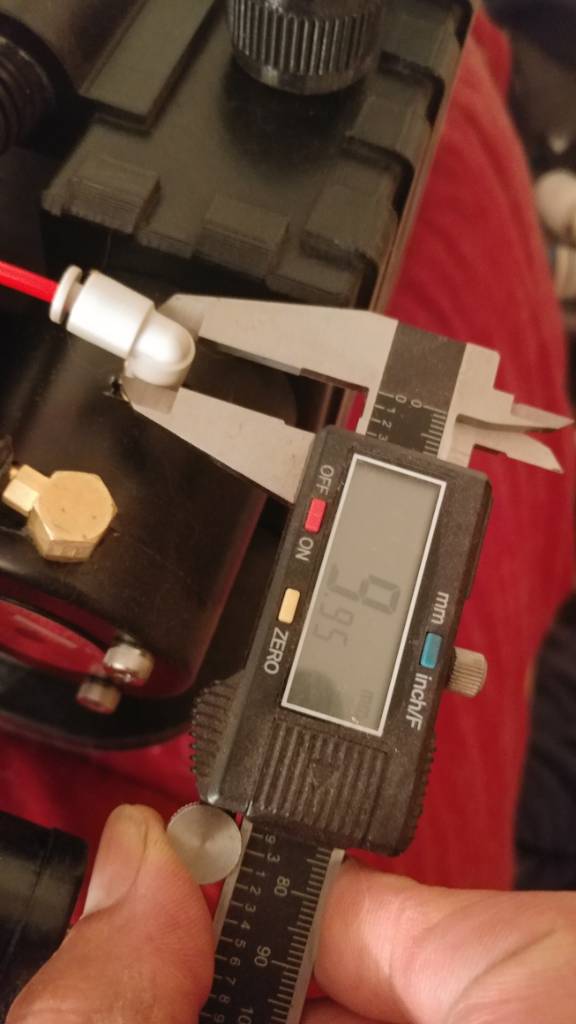 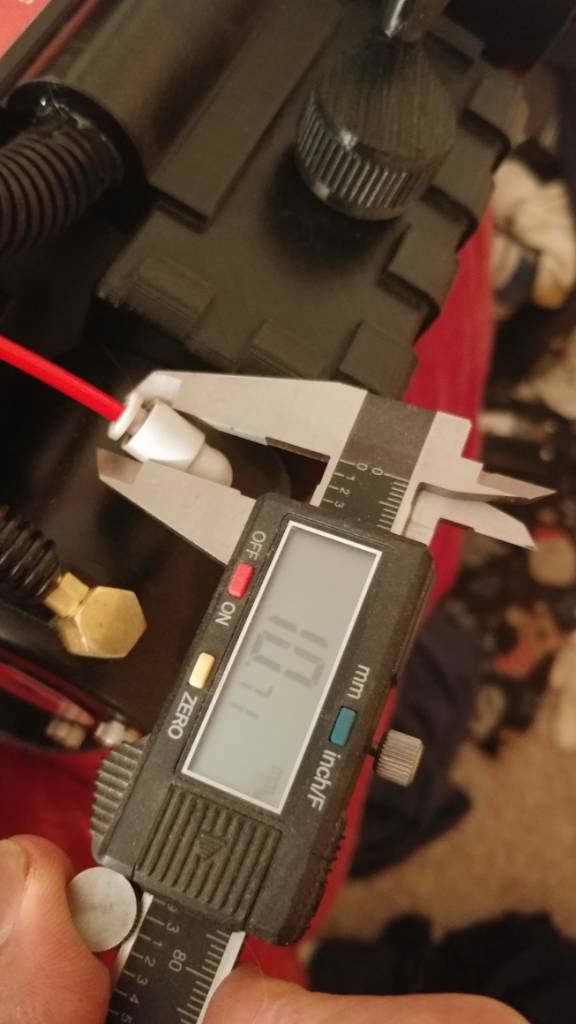 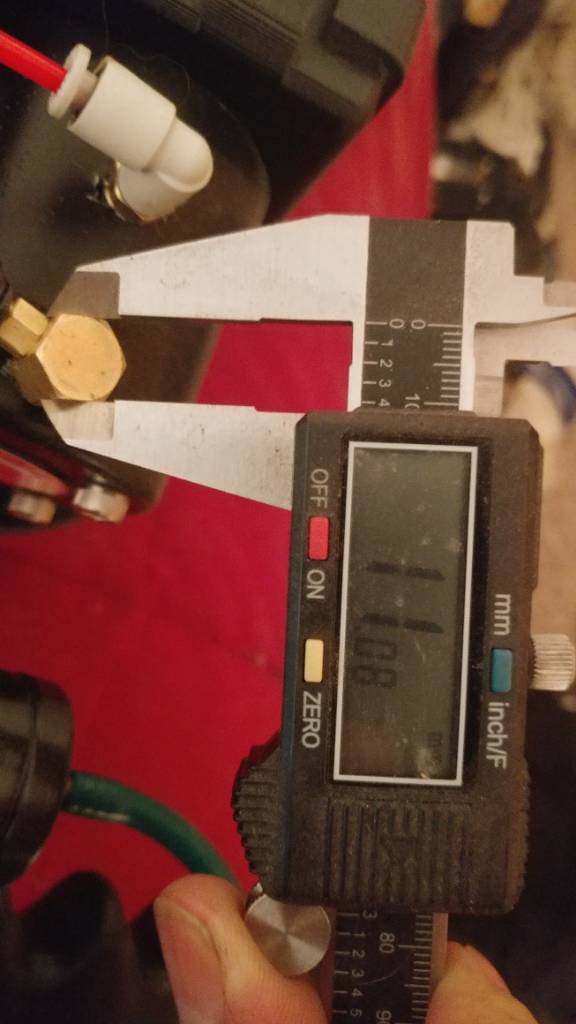 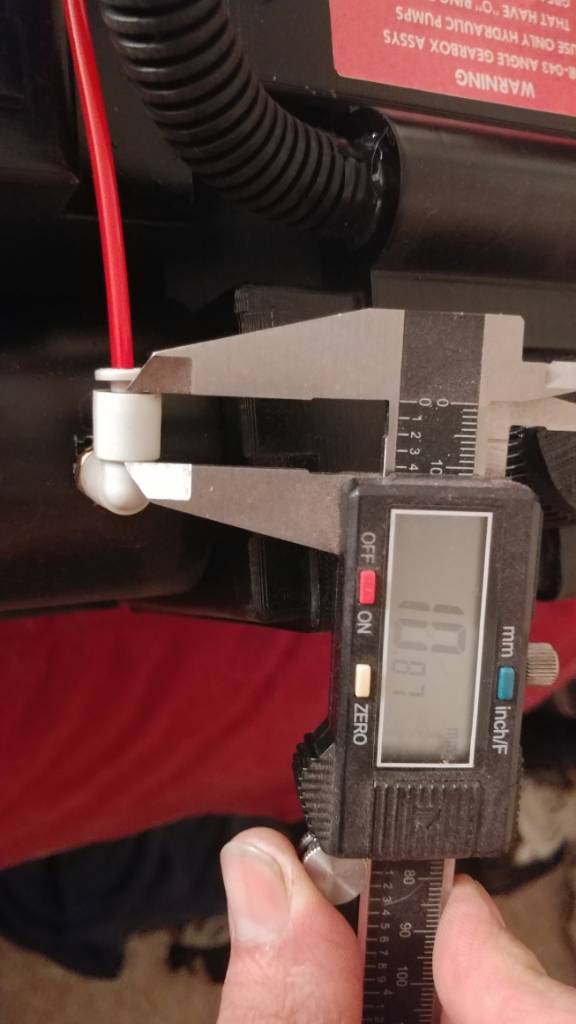 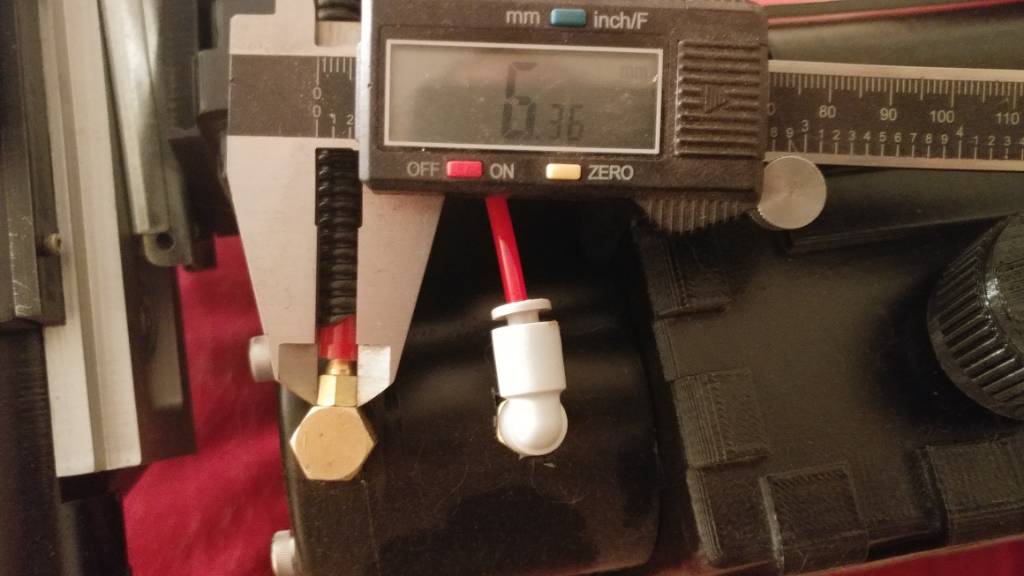 So while the pack isn't 100% complete, I got it functional and looking good enough to take out on Halloween. Even though it wasn't done, it was good enough to net me the first prize at my work's Halloween Costume Contest this year, which is awesome. It's really cool how much people just really love Ghostbusters.

Here is a video showing off where my progress is at:
https://youtu.be/I2pHLTGbjA4

So there are several things I still need to wrap up on the pack. I need to attach my clippard valve to the wand, as well as a couple other little parts and lenses. I have to get the cushioning on the top of the alice frame. I also need to add the tubes to the wand, and print out a couple more things to go on there.

I ended up 3D printing WAY more stuff than I thought I would. All the legris elbows, brass elbows, legris fittings, etc, are all 3D printed. A lot of that stuff I just ended up printing and finishing the best I could with the plan of, at some point in the future, swapping them out if I wanted to.

EDIT: ALMOST FORGOT! The Neutrino Wand files I printed out are from WindDrake. They turned out awesome!
My Modded Spirit Halloween Trap!
My 3D Printed Proton Pack!

I appreciate . I already planned on getting here f[…]

These are the two knobs I picked up for my self […]