by Styrofoam_Guy
I was at Star Wars Celebration and I thought about going to complain about their slow delivery at their booth but decided not to in the end as I am pretty sure it would have been useless.

I have heard too many stories of delay after delay.

I did get in on the initial Stormtrooper kit those many years ago. Great price. long wait. After that I have never bought from them again and it looks like the right decision.

The pack was tempting but the dollar exchange rate was another stile against it.

by devilmanozzy
When they announced that they were taking pre-orders for the Spengler Legacy Proton Pack before shipping out all the Proton Pack Kits... that should have been a hint right there that they are a questionable company. Lots of shilling a while back for them, but the truth is that they have some rather bad business practices. Pretty much all major props get delays, and at this point you'd think they'd stop giving out false projections. I could care less what they do, they are a business. Sony should drop the license with them, and be done with the trainwreck of a company.

I'm a bit surprised that GBFans hasn't added them to the blacklisted seller list. They fit in perfect with 88MPH. Companies that are examples on how not to do business.

by deadderek
They really should be added to the list. If they were any other seller they would be for all the shit they've pulled.

by ccv66
A delay I could understand, but they had no intention of delivering on promised dates.. They were just dangling a carrot in front of the donkey , to boost sales before going into production. Intentionally lying. However was well warned by star war fans, so the pack kit was the carrot, me the jackass

by Dr.D
I've been scared off from buying there stuff for a while. I might finally break for some of the GB1 patches, which are magnitudes more affordable than anything else. ALMOST went in on a pack kit, but heard too many stores of delays, broken or missing parts, and just general unpleasantness with the company.

I think they grew too big too fast and underestimated the actual demand for the kind of screen-accurate (or close enough)
costumes and props they offer. Speaking of which...did anyone ever get one of their flightsuits? Have they ever been released?

by ccv66
I have their patch. Out of all of the ones I have it's probably my favorite. I ordered it when it was in stock and on sale. It came in a reasonable time, around a week-ish

Meanwhile, Anovos Head of Shipping reads this and... 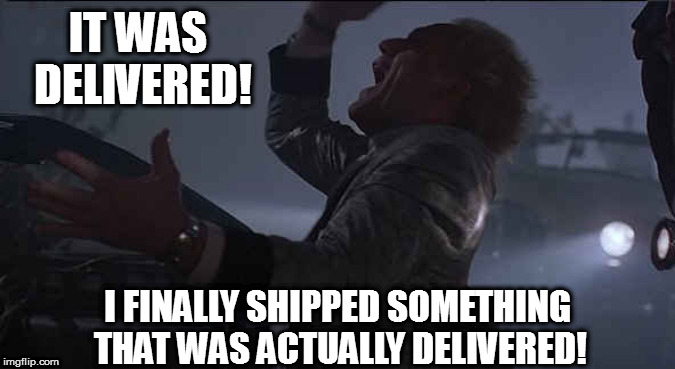 via Imgflip Meme Generator
But in all fairness, Right on dude! I know the feeling of finding a great source for great props

& Good on ya Anovos for coming through.

by ccv66
Dont get me wrong , I have plenty of complaints about Anovos. Had to get refunds on several items. In general more about the way they run their business then their actual products. I don't mind kicking them when their down, but if they do something good I'll admit it.. not sure how I feel about the name tags, but the arm patch is pretty good.

by GbWannaBe82
I am in the boat of actually Pre-Ordering one of the Spengler Packs. No responses, fully paid up no news delivery keeps getting pushed out. Time to start thinking of joining that Class Action all the way from Australia. Pack of Numpties if you ask me.

by d_osborn
Their GB patch and ESP cards are great. I was seriously considering the Spengler pack, but there’s no way I’ll be preordering.

by Dr.D
I've not spent a single dollar with Anovos, but the horror stories are everywhere and even worse for Star Wars Fans. I was pretty neutral about all this until Anovos started releasing "statements" before SW Celebration in Chicago. Their statements were so dismissive and counterproductive. They never once acknowledged their faults or faced up to their horrible practices of taking full payment for items and never delivering.

Like...that's business 101. Don't sell what you don't have. Given their attitude towards customers, hearing a few people say they received some of the lower cost items doesn't negate all the other stuff they've done. The Class Action Lawsuit is bad, not just for them but for the fans. If any of the licencees (Disney, Sony) are pulled into that, you can bet your life they won't let prop companies like Anovos have the licence for their props anymore.

by RedSpecial
The final straw for many was the change in policy, doing away with refunds on preorders.
I'm also in the 501st and quite a few people in my group had preordered expensive Star Wars suits years ago that have yet to receive them.
Especially the first order stormtrooper kits.

I'm glad some people have had a better experiences with them but there are so many horror stories now that I wouldn't even consider purchasing from them or recommending any of their products no matter how good they seem to be.