PETER
Where are we?

RAY
Oh, it looks like we're in the teens somewhere.

PETER
Well, when we get to twenty, tell me. I'm gonna throw up.

At this point, most people are also probably aware that stairs in the Biltmore Hotel in Los Angeles were used for this scene. I'm not sure who in the GB fan community made this discovery, but I do want to express gratitude to any who have shared information about it before me. I wouldn't be able to do this article without all of that previous work. I know it was discussed on GBFans by Kingpin as far back as 2010, and Proton Charging has provided useful information about it in recent years as well. Additionally, Spook Central has provided some good information on the stairs, as well as probably the most comprehensive article about scenes shot at the Biltmore:

That being said, the filming location of this scene was most likely first mentioned way back in 1985, in Don Shay's Making Ghostbusters book. This comes from the notes on page 165: 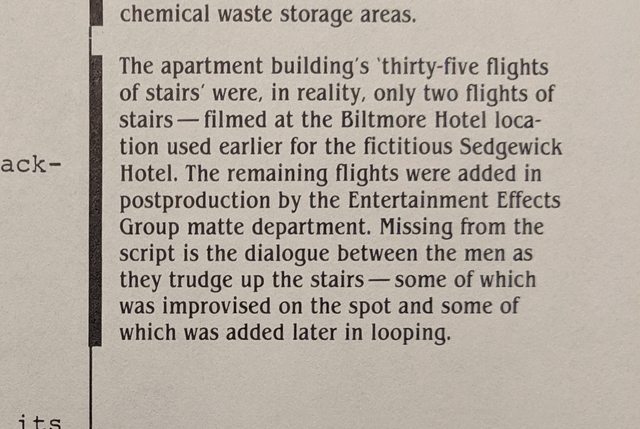 To help illustrate how this was done, it helps to see the scene next to the matte painting that was used to both add height and width to the stairs: 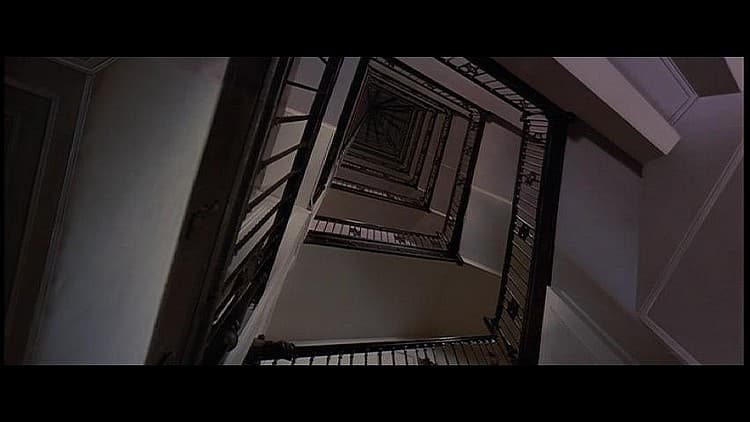 Now, what I have yet to see online is a guide explicitly directing people to the correct stairway. The Biltmore actually has 4 stairwells with similar architectural features, numbered #1-4 in this map from the 4th floor of the Biltmore: 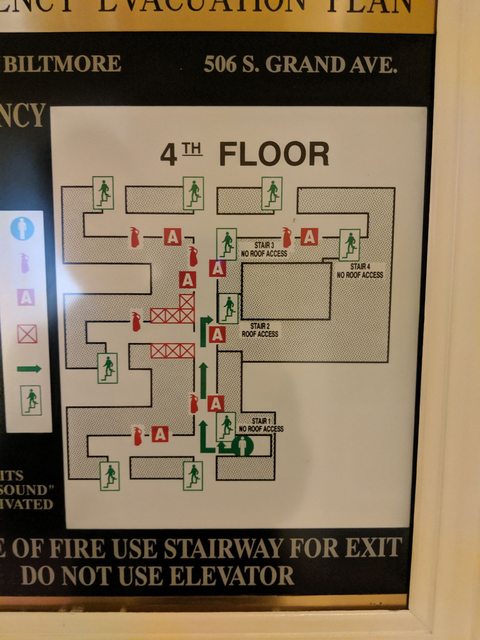 It's worth noting here that none of the colors match up anymore, as the walls, handrails, and balusters were all repainted at some point after the filming of the movie.

What I've found through a little bit of investigating is that stair #2 is clearly the stairway that was used for the film and I want to explain why as I've noticed a number of people assuming incorrectly either that it is stair #1 or that there's no way to determine which stair it is.

To prove that stair #2 is the stair that was used, we need to look for unique features. I've identified two of them: some kind of encased wire to the left of the guys and some molding on the wall behind them: 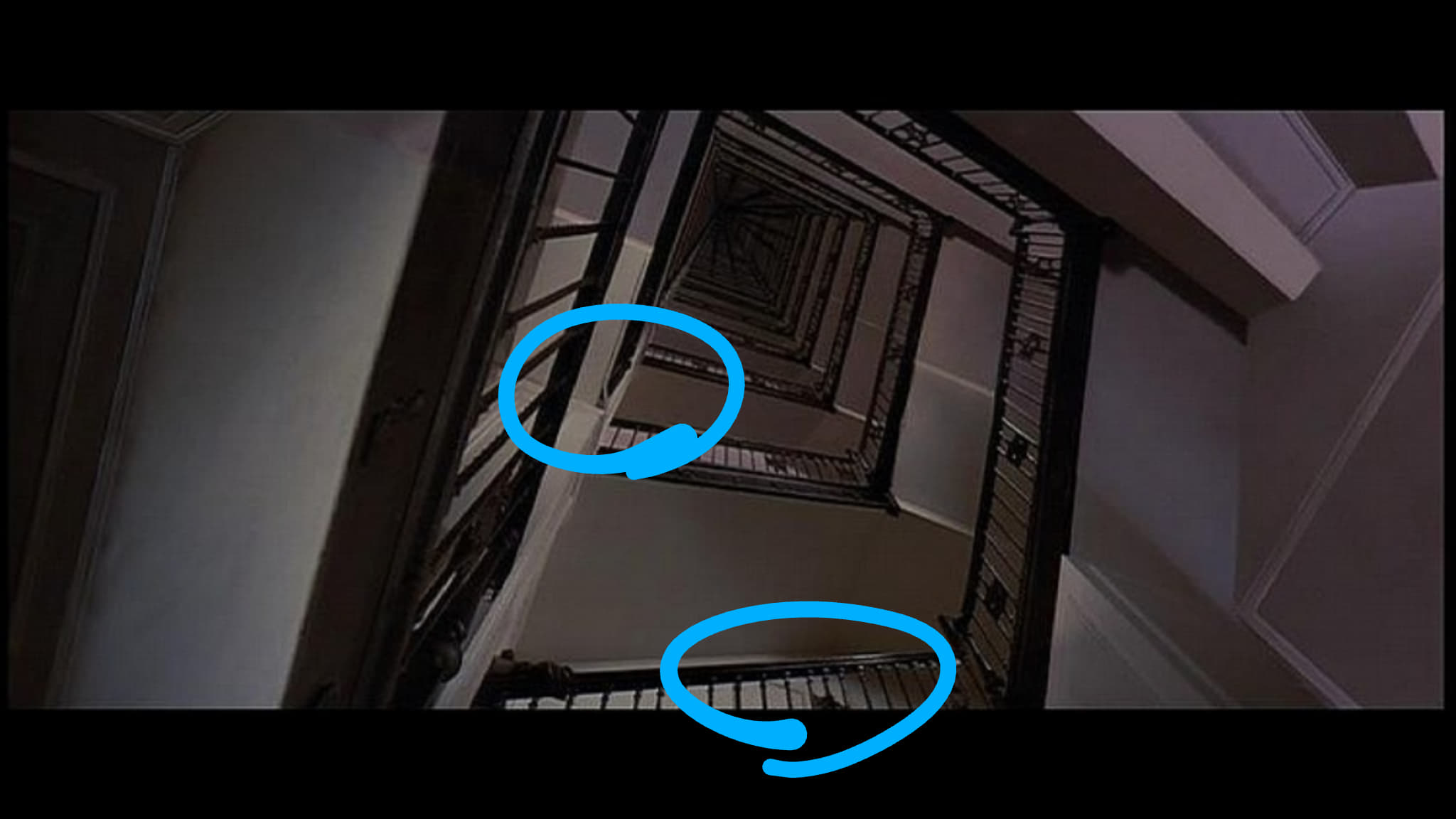 If you go to stair #1, you'll find neither of these identifying markers (nothing on the back wall and no wire): 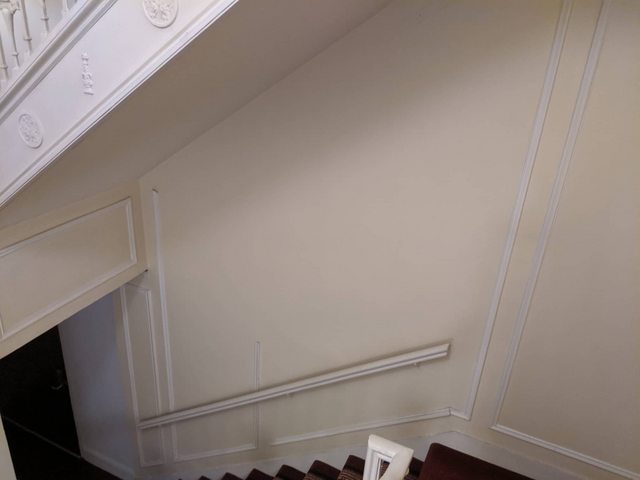 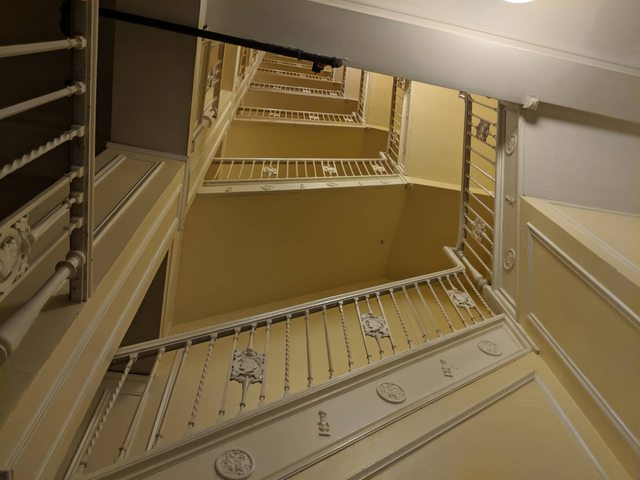 Now, when you go to stair #2 on the other hand, you find the exact same identifying markers: 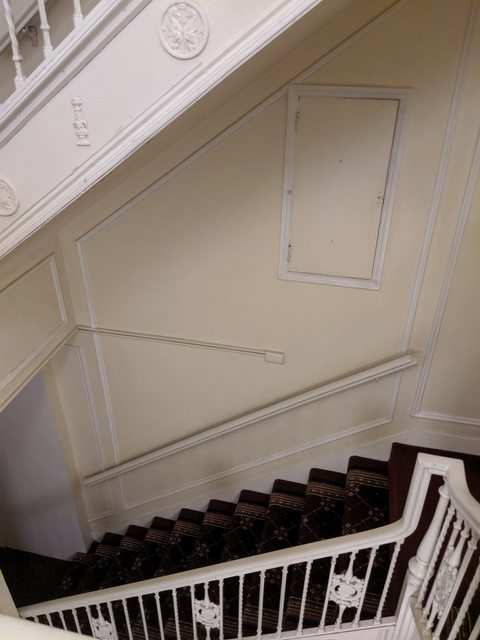 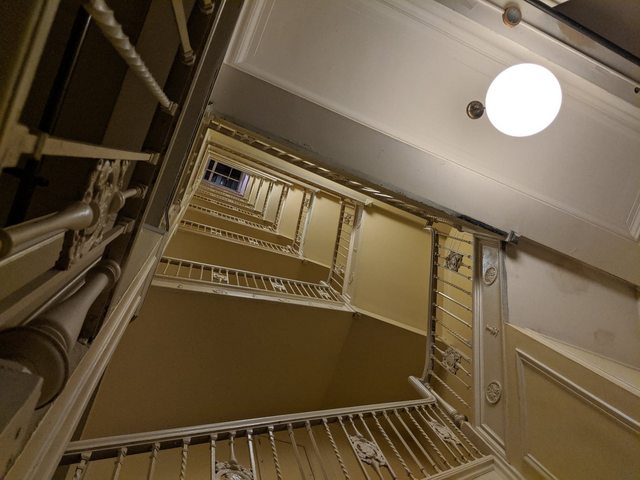 Now that we have the correct stairs, how do you get there and how was the above picture taken to mimic the film shot? This has all been explained elsewhere before by others, but I'll repeat it again here, including directions to stair #2.

To get to the stairs, you'll want to first take the hotel elevator. Getting off on the 3rd floor or higher (depending on how many steps you want to walk down), follow the map to stair #2 (you can partially see it from the elevator hall, but basically, it's a quick left and quick right and you're there). Next, you'll essentially just descend stair #2 almost all the way to the bottom (which is the 2nd floor, used primarily by hotel staff).

The final photo I took was from the 4th and 5th step up from the bottom of the stairs (i.e. the 2nd floor). It's not perfectly aligned, but it's pretty close to where the camera would have been positioned for the film.
Kingpin, robbritton, Alex Newborn and 3 others liked this

Re: A Definitive Guide to the Central Park West Stairs at the Biltmore Hotel#4919653

I'm surprised at how far the actual stairwell goes up. Honestly they could have done the shot without the matte painting.
cmcanall, 2GunsRacing liked this

Re: A Definitive Guide to the Central Park West Stairs at the Biltmore Hotel#4919698

Re: A Definitive Guide to the Central Park West Stairs at the Biltmore Hotel#4919700

Re: A Definitive Guide to the Central Park West Stairs at the Biltmore Hotel#4919807

Alex
cmcanall, 2GunsRacing liked this
What a knockabout of pure fun that was!

Re: A Definitive Guide to the Central Park West Stairs at the Biltmore Hotel#4919818

I did a slight deform to the film frame to get it to line up with the matte painting.

Then I cut out the holdout area from the matte.

Then I pasted this back on top of the film frame. Rather than try to blend them together, I liked how the color contrast indicates which areas were matte and which were plate photography.

This pic shows that they paint *just* enough for the final composite. No wasted effort here.

And then I sliced it down to how it appears in the film, more or less.

I found it a fascinating deconstruction of the beauty and artistry of a good matte painting.

I had mistakenly assumed the matte was just THIS part of the stairwell, where the pattern seems to change.

I'd never imagined that SO much of the final frame is just paint on glass.

The only portion that was shot in the real location was this.

Thanks again for this fascinating exploration!

Alex
Kingpin, cmcanall, 2GunsRacing liked this
What a knockabout of pure fun that was!

Re: A Definitive Guide to the Central Park West Stairs at the Biltmore Hotel#4921585

Alex Newborn, many thanks to you especially for the additional analysis. When I used the word "definitive", that was to emphasize my confidence in identifying the correct stairway. By no means did I think I had spoken the last word on the subject though. Clearly more could be said and your additional photo analysis is very useful, informative, and much appreciated.

The question being will the uniforms be the moth […]

Started with just the No Ghost logo's on the front[…]

Since this thread was started, the consumer 3D pri[…]

Matty props. Matty no longer have any licence[…]