By kind2311 -  July 22nd, 2009, 10:48 pm - Posts: 2313
-  July 22nd, 2009, 10:48 pm #144374
The jumpsuits used in Ghostbusters are very similar, if not the same as the standard military CWU 27/P Flyer's Coveralls. The suits used in the first film were made from a tan/khaki ripstop fabric but have not been confirmed as being either military surplus or a custom-made prop. The suits in Ghostbusters II were custom made by Flightsuits Ltd. and were made of a Khaki-colored material with a unique herringbone pattern. Almost nothing is known about the dark gray suits that were seen briefly in the montage and end credits. The color of the suits in the first film has been the subject of controversy for as long as fans have been making Ghostbusters props. Although they are primarily tan in color, throughout much of the first film they appear to be almost gray. This has given rise to the belief that the suits where tan and had been dyed or even "overdyed" with gray. Others feel that the suits were tan and appear gray due to ambient lighting and the type of film used to make the movie. Some feel that just like the proton packs, there may have been hi quality clean hero-grade tan suits for close-ups, and darker, more gray "stunt" suits that were used which required the suits to appear very used and dirty.

There are 3 different grades of flight suits that can be used to replicate the originals.

The CWU 27/P Flyers Coverall is the flightsuit that is currently issued to US Military pilots and is the most accurate flightsuit available in terms of screen-accuracy. The suits are made in only 2 colors, Sage Green and Desert Tan, the latter being the accurate color. They run anywhere from $30 for used ones on eBay to $200 for brand new ones. They include all the features of the original suits with the exception that most have black paint on the zipper pulls, which if removed will usually reveal brass. These suits are a very mellow shade of khaki and do not usually require any dying, which is a good thing as Nomex material contains no cotton or polyester, instead they are composed of synthetic meta and para-aramid fibers, designed to make the material heat-resistant, but also making it nearly impossible to dye beyond anything but a very light gray tint. Nomex material is heavy and does not breathe as well as other materials making these suits kind of stuffy in warm or muggy weather. Also, they are designed by chest size not waist, and they only go up to a 52 making them unwearable by large or overweight individuals.

The best place to purchase this type of flightsuit online is eBay. They are easily found by searching using the keywords "Flight Suit Tan"

See these search results for example

Click here for a pic of a Nomex CWU 27/P in real life. The Tru-Spec 27P is considered to be the happy medium of flightsuits. It combines the features and benefits of a CWU 27/P but in a lighter, more comfortable poly/cotton blend although the blend is heavy in poplyester which can make the suit a little warm to wear and gives a bit of an unwanted shine to the fabric. The factory khaki color on these suits seems to be the closest to screen-accurate, requiring little to no alteration. These suits have screen-accurate features such as unpainted brass zippers and a storm flap, however they lack other features such as the lap pockets and the knife pocket on the inner left thigh. These suits are ideal for larger people as they go into larger sizes than Nomex suits do. These can be purchased from Online retailers such as Galls, Army Surplus for Less and Chief Supply.

Click here to see a Tru-Spec 27P in real life

This diagram will show you Tru-Spec's current pocket layout.

The Rothco Air Force Style Flightsuit is the third and least expensive option. Their features most closely match those of the Nomex CWU 27/P while being similar in construction to the Tru-Spec 27P but containing a higher cotton/poly ratio. The material used makes these suits ideal for dying and for wearing in hot weather. Rothco suits are also ideal for large people as certain colors come in sizes up to 6XL. Rothco suits come from the factory in a color that is more yellow than khaki and are known to have poor tailoring making them uncomfortable for some wearers who require more length in the arms/legs and more area in the waist and crotch. In addition to this, the breast pockets, especially on the larger sizes tend to be placed lower on the chest than Nomex and Tru-Spec suits.

These suits are plentiful at nearly every local and online surplus store and are the easiest to find. If you search eBay using keywords like "Flightsuit, khaki, L, XL" etc., you will get almost exclusively Rothco suits. The Picture used above is a commonly used stock picture for a Rothco flightsuit and the color in the picture does NOT match the color of the actual Rothco suit.


Here is a comparison shot with shodanmark's Nomex CWU 27/P on the left and a Rothco Air Force Style Flightsuit on the right: Now Some comparison shots of mburkit's Rothco suit(left) compared to his Tru-Spec on the right: This looks good, Vinny. Now instead of chastising someone for getting a rothco flight suit, you can just give them a link to this thread and they will be overwhelmed with joy from the plethora of information you have supplied for us here today. Tru-Spec DO come with the full pockets 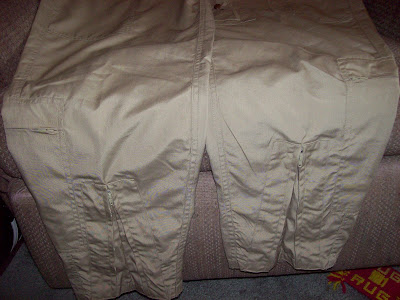 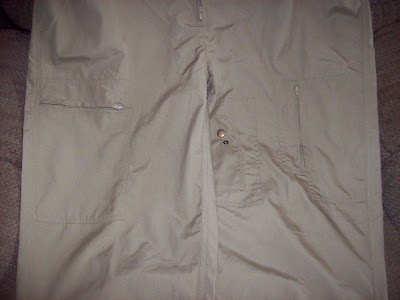 As you can see all Leg pockets are there.

This has been found by several people. I got mine from Army Surplus for Less which lists it as a Deluxe Tru-spec
https://secure.armysurplusforless.com/p ... .php?id=75

By thor2015 -  July 23rd, 2009, 12:06 pm - Posts: 281
-  July 23rd, 2009, 12:06 pm #144498
Spooky,
Can you get more details on that Tru-Spec? The pockets are there but the zippers are not brass. They are colored the same as the suit. Does this suit with the pockets have brass zippers and a storm flap? Also, what information is on the inside tag? I know when I purchased two Tru-Specs awhile back they were both the same size but the tags were worded differently (even the sizes were labeled a bit differently) as if a revision change happened somewhere in the process.


Outside of that:
The zipper pulls are a heavy metal but the teeth seem plastic; though they are still on the heavy side.
The sizes are S, M, L, XL (etc) and mine says L Intermediate (aka Regular) follow the sizing chart on that website. and possibly go one size up for added comfort (the suits in the movie were baggy anyway, it is just general practice). There is no storm flap.

I would suggest emailing them if you are really concerned about the zippers. They may be all metal by this point as the site says.

Hello, I see that you sell the Tru-Spec 27/P flightsuit and i have a couple of questions. I have owned several of these suits and love them but they all seem to be lacking the lap pockets and the small knife pocket on the inner left thigh, like the USGI nomex suits have. I see that you sell a "Deluxe" version, is that right? The picture shows a Tru-Spec with the extra pockets i need and I wanted to make sure that the Tru-Specs you sell actually have the extra pockets. I am trying to stay away from buying a Rothco flightsuit.


They replied this morning:

Hello,
We double checked, and the Tru-Spec Flight Suits do not have the pockets that you describe on the thighs like on the U.S. G.I. Flight Suits. We apologize for any inconvenience that this may cause and if you have any questions for us, please don't hesitate to ask and we would be glad to help.

Spooky your suit is very odd. The pockets are there, there's no doubt about that, but as thor pointed out, they dont have brass zippers or a storm flap, almost like a Tru-Spec/Rothco hybrid. Now that I think about it, Krenzy dyed a khaki Tru-Spec to GB2 gray a while back in this thread and his has the pockets like yours, zippers like yours and is also lacking the storm flap. I think you two (along with Krenzy's friend Whitey) have some previous model Tru-Specs and what we are now buying is a new revision. The belt you have there is almost GB2 accurate but has brass hardware instead.

NOOOOOO!!!!!! My first costume f-up! LOL! I was so thrilled thinking I had bought the right one! I looked at a production photo and I thought it looked just like the one I got. Well, $9 in the trash I guess.

Honestly if you wanted to, I am sure you could paint it or something. Unless you are going for total screen acurracy that would pass for me.

Still.... I am confused by everyones obsession with using a magnum as an ecto. They are TINY cars.

The magnum is cool and all.... it is the newest fad in a long long line of cars that everyone thinks would make the "perfect ecto." So... say what you like about them, how badass you think they look, but I won't subscribe to this fad.

If you want an accurate GB1 belt, you need to buy this belt or it's like, and dye it gray. I know you dont want to have to dye but it is necessary for what you want, it's easy and effective when done right and you can do your elbow pads at the same time

The screen-used belts in GB1 were gray with 3 black eyelet holes and black metal hardware.

This is where we're going to have to disagree. I'm 99% positive the belts in both films are khaki. I think what throws it off is the drastic color difference between the first movie suits and the second movies suits. And, like the uniforms in GB1, the belts also take on a gray tint sometimes, but I do believe they're khaki.

The belts AJ was/is selling the shop were dead on in color in comparison to my reference. I have a comparison photo on my computer at home of a khaki belt, gray belt, white belt dyed gray and then the belt from the GBFans shop. I think once you see it, you'll agree. The suits are made in only 2 colors, Sage Green and Desert Tan, the latter being the accurate color.


It should be noted it comes in 3 colors, not 2. There are a few places you can purchase a black nomex from as well.

ahahahah 34 should be ok but i personally would go with the 36, to be safe

I've always had a wicked fast metabolism and been a bit of a skinny little shit! LOL! Hi GBfans, I am planning to model the PKE from th[…]