By gEkX -  February 19th, 2012, 6:14 pm
-  February 19th, 2012, 6:14 pm#377980
I'm in the search for some GB1 100% accurate gloves. I know AJ has some that are very close. The big difference with the screen used and the shop ones I noticed is the raised diamond grip. I found a company that carries gloves with this grip but the problem is the diamond pattern goes up and over the finger tips. It almost looks like diamond pattern finger-nails on them.
So my question is has anyone found "the" gloves?
Spring-loaded acrylic tip? Yes.. have some:
http://www.gbfans.com/community/viewtop ... 42&t=31992

By onlyalad19 -  February 21st, 2012, 12:02 am
-  February 21st, 2012, 12:02 am#378220
The gloves have been mentioned to be electrical lineman's gloves. Salisbury is the closest to screen accurate manufacturer of these gloves. However, since they have a dated window for usage, old stock is impossible to find and all new stock now contain info near the cuff, which is color coded to correspond with size, class, max voltage etc. Here is a picture of a pair....

They are all over Ebay and cost a small fortune, but since they aren't all black they will not be accurate. I would assume you could just color over them if you wanted to get a pair. Hope this helps.
My GB1 Belt Gizmo Build: http://www.gbfans.com/community/viewtop ... =7&t=27977

These are the closest (at least going by the photo on the site) I've been able to find so far...

They appear to lack the semi-gloss sheen that the GB1 ones had (and the cuff may be about an inch too long), and memory serves... this is one of those sites where there's like a minimum order of a thousand... but it's been about a year since I checked, so I don't really remember.

They also have this style which appears to have a narrower cuff (I still haven't fully determined which is more accurate), but there's a band of color around the base (which could probably be cut off)...

By gEkX -  February 21st, 2012, 11:27 am
-  February 21st, 2012, 11:27 am#378301
Thanks guys the first one doesn't have the raised grip it looks like and are pretty long. The second link looks likes the same style I already have. Notice how the raised grip goes all the way up the fingers. Now the third one looks spot on besides that section of orange. I wonder how hard it would be to remove that.. from the screen grabs it looks like the gloves were trimmed up a little if worn. Venkmans gloves in particular look very short to me. Anybody else notice that?
Spring-loaded acrylic tip? Yes.. have some:
http://www.gbfans.com/community/viewtop ... 42&t=31992 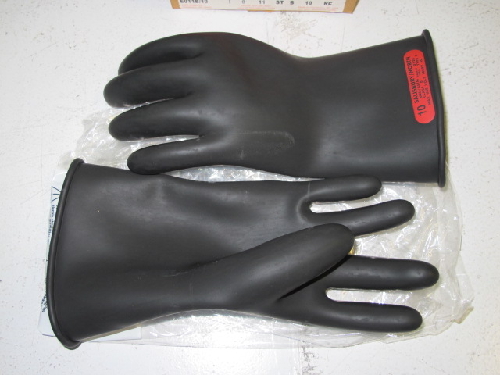 Both gloves shown in the other post are textured on the palm and/or fingers, which to my knowledge is not accurate at all. The gloves in both films are smooth all around. Do you have any pics showing otherwise? I would like to see if you do.

onlyalad19 wrote:Both gloves shown in the other post are textured on the palm and/or fingers, which to my knowledge is not accurate at all. The gloves in both films are smooth all around. Do you have any pics showing otherwise? I would like to see if you do.

The GB1 gloves had textured palms and fingers, the GB2 gloves, as far as I can tell, did not.

Unfortunately I lack the ability to take screen-caps, but I can walk you through a few scenes in GB1 where you can see the texture for yourself...

Scene 1 - Sedgewick entrance (a tiny hint) - As the Ghostbusters enter the Sedgewick and walk through the lobby... Ray's gloves are tucked into his belt with a tiny bit of the bottom of the palm and thumb facing the camera. The palm, and the side of the thumb closest to the palm, appear gray due to the texture on the gloves. This is visible for the entire shot.

Scene 2 - Sedgewick elevator (the blurriest) - As Ray steps out of the Sedgewick elevator, he goes to pull his proton gun for the very first time. If you take it frame by frame, as he reaches for the gun, you can see that the finish on the palm, fingers, and thumb of the glove are different from the rest of the glove.

Scene 3 - Slimer attacks (the 2nd blurriest) - When Slimer charges towards Peter in the hallway of the Sedgewick, the scene cuts to a close-up of Peter's face. In one gloved hand Peter is holding his MT-500, the other gloved hand is balled into a fist and held up to his forehead in defense. Looking at the fist you can clearly see a difference in the finish on the palm and inner thumb of the glove.

Scene 4 "Heat em up!" (100% clear definitive proof) - During the battle with Gozer Peter yells "Heat em up!". The scene cuts to an extreme close-up of one of the proton guns being switched on. If you take it frame by frame you can very clearly see the textured palm and fingers of both gloves holding the gun. 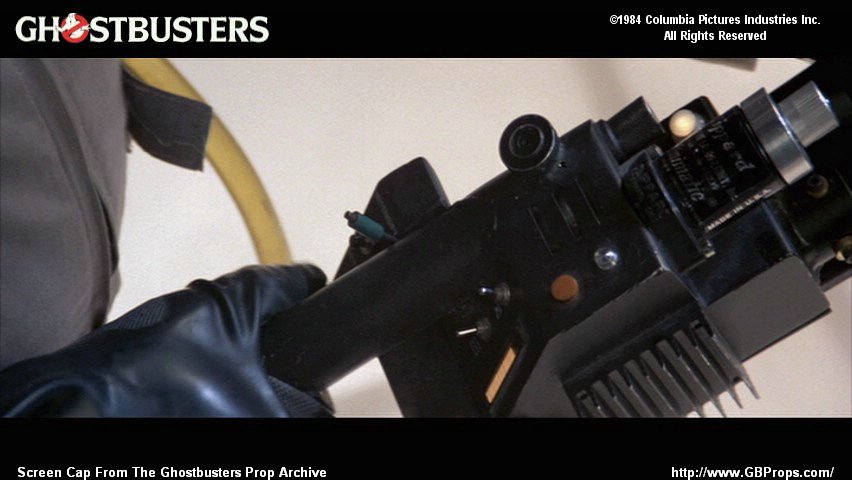 notice that by the palm and on the thumb.
Spring-loaded acrylic tip? Yes.. have some:
http://www.gbfans.com/community/viewtop ... 42&t=31992

See how that embossed section continues around the back side of the thumb on the right hand? These seem to be pretty close. What do you think?
My GB1 Belt Gizmo Build: http://www.gbfans.com/community/viewtop ... =7&t=27977

I am going to contact the supplier tomorrow and let you guys know.
My GB1 Belt Gizmo Build: http://www.gbfans.com/community/viewtop ... =7&t=27977

1 - The diamond pattern continues around the tip of the thumb, not on the fingers which is great... just the thumb.

2 - There is a band of diamond pattern around the base near the rolled cuff.

3 - The one size available would only fit if everybody were the size of Andre the Giant! I mean these things are so freakin huge I can fit both hands into one glove.

The sales rep that said the contrary to all my questions regarding these points of interest, stated I can get a full refund including the shipping if I was not satisfied. Not only am I not satisfied, I feel completely lied to. I am starting to think that the accurate gloves are no longer manufactured. If they are, they are for some strange reason not available and/or pictured online.
My GB1 Belt Gizmo Build: http://www.gbfans.com/community/viewtop ... =7&t=27977

There's a shorter style, seen throughout the montage, that is similar to the GB1 gloves but so far doesn't seem to be textured.

PLUS you can use them to scrub pots!! 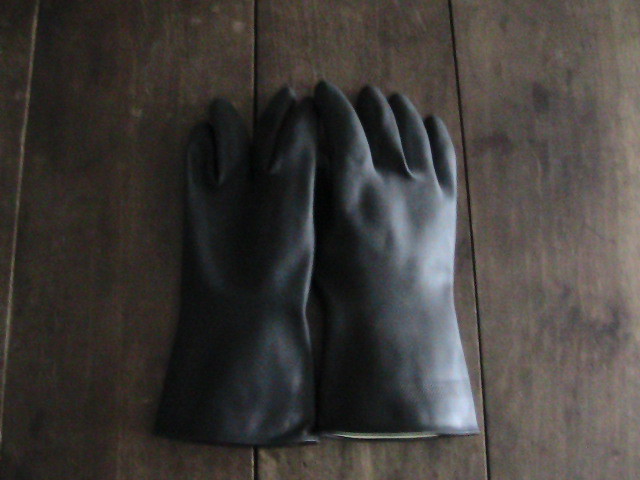 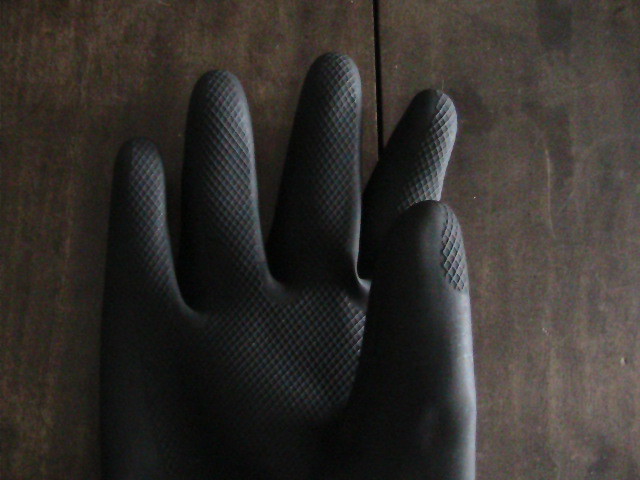 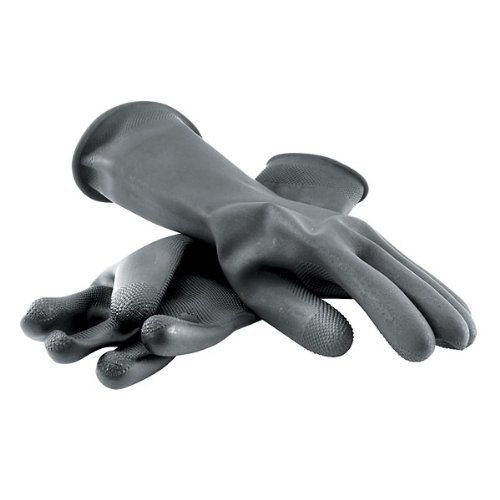 All black with no markings and has the textured palm. Turned inside out gives the look of them being all smooth, so GB1 & GB2 gloves taken care of...

I’m desperate to see these kits come to frui[…]

Hahaha! One of my favorite comments about the vide[…]

Chances are the distortion has to do with the spea[…]