Firstly, to identify the shirt in question, I did a little research to a void re-inventing the wheel. I consulted the following threads (pardon the pun) to determine that it is an L.L. Bean orange flannel shirt:
On eBay, I found an L.L. Bean soft cotton flannel work casual shirt in sedona orange with thick buttons. The tag identifies the shirt as 0 MT03. 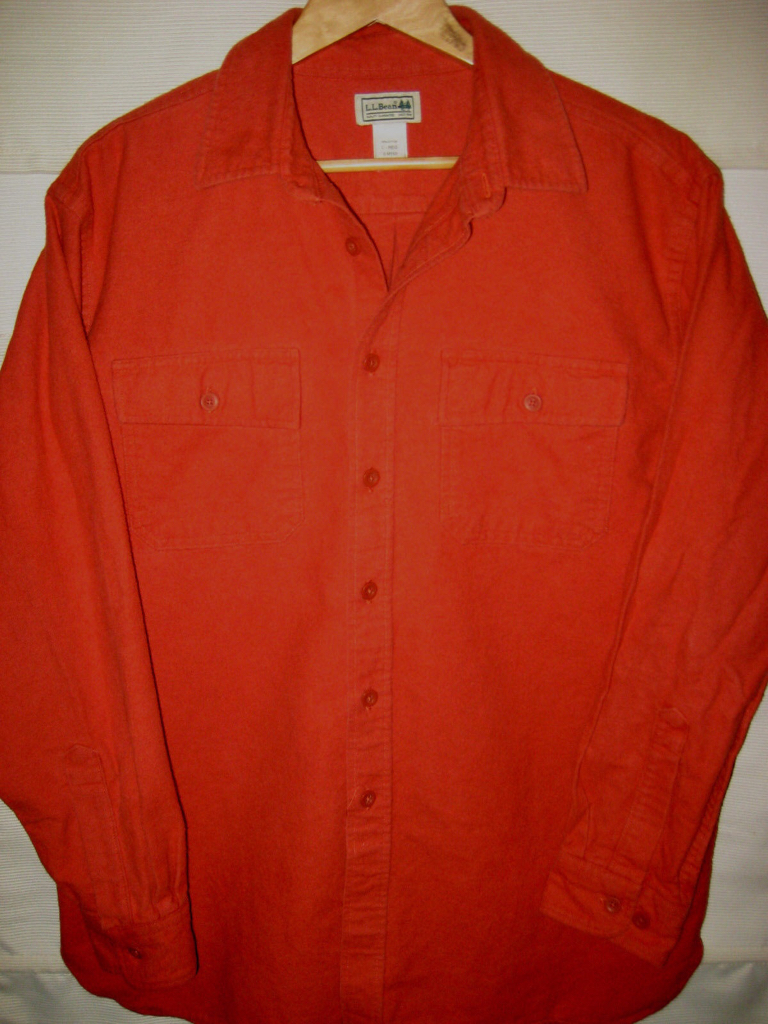 The front pockets have slightly slanted flaps, which may or may not be screen accurate (probably the latter). Similarly, the buttons are the same colour as the shirt (instead of a wood/beige colour). Nonetheless, this shirt looks very similar to the one worn in the movie, so I purchased it.

I love the feel of the shirt. It is fairly thick and it screams autumn. I realized later that it is the same shirt purchased by pOOpTarT.

Now for the elbow patches. For some reason, the screen grabs on KingPerformance's thread did not work for me at the time (they are working again now), so I located the scene myself and made my own. At first, I tried to take a screenshot from my phone using Amazon Prime Video, but that didn't work. I ended up taking two pictures of the images on my TV using my cell phone. 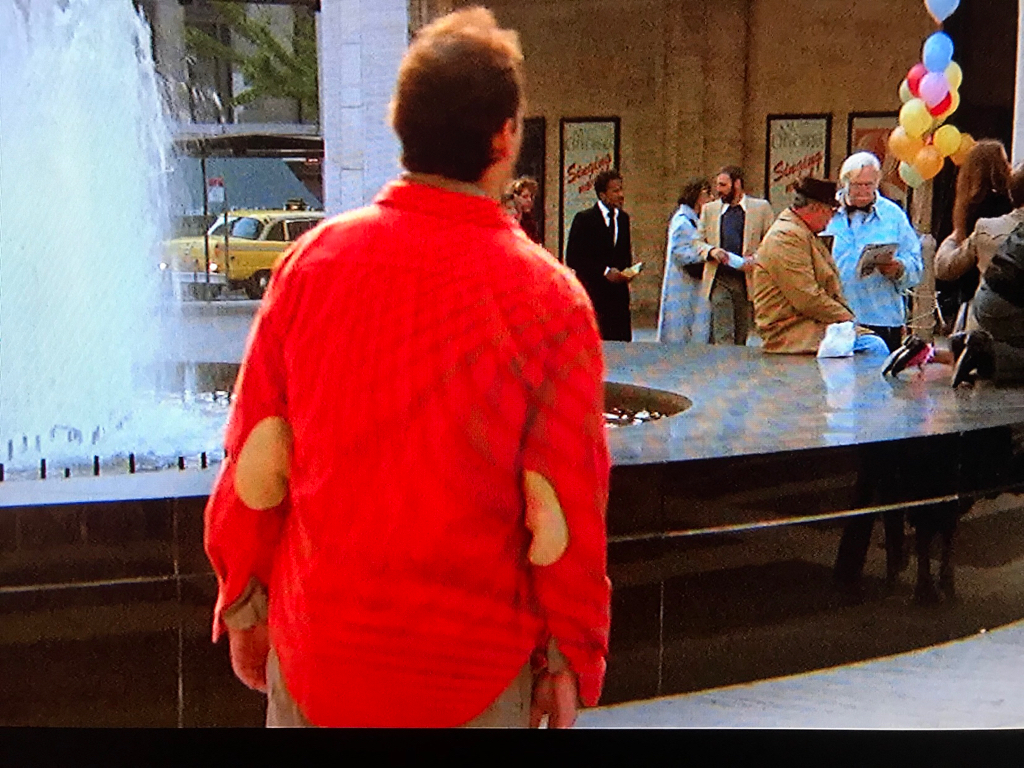 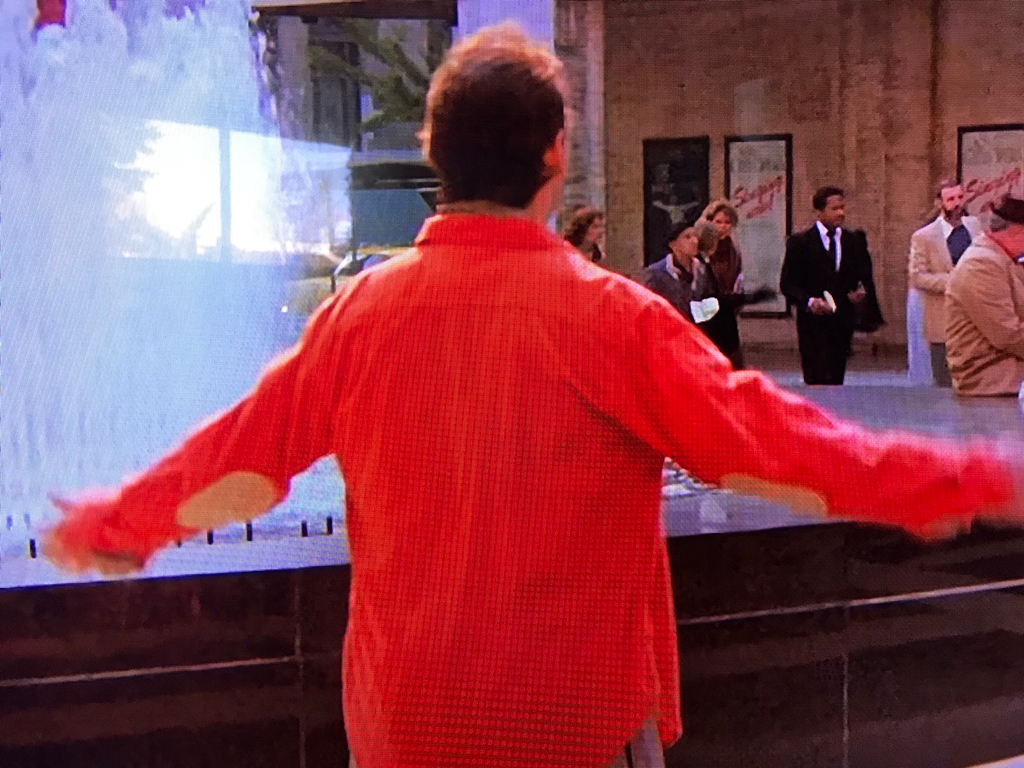 I grabbed a piece of cardboard and designed a pattern by estimating the form and the dimensions from the screen grabs. I found this part to be quite difficult, often asking myself if the patches were too long, too thick or too narrow, or if the edges are too square or too round. It's really tough to tell from the screen grabs, so I did my best. In the end, I think my pattern is pretty close. Here are some pictures of the patterns I made with the dimensions written in pencil: 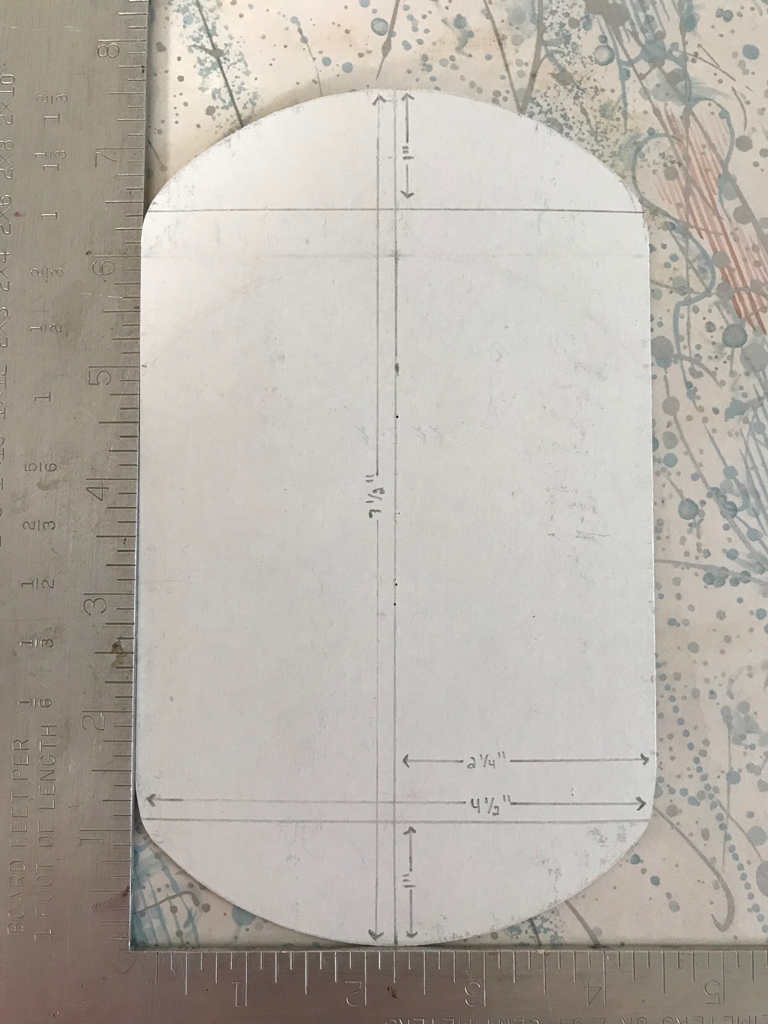 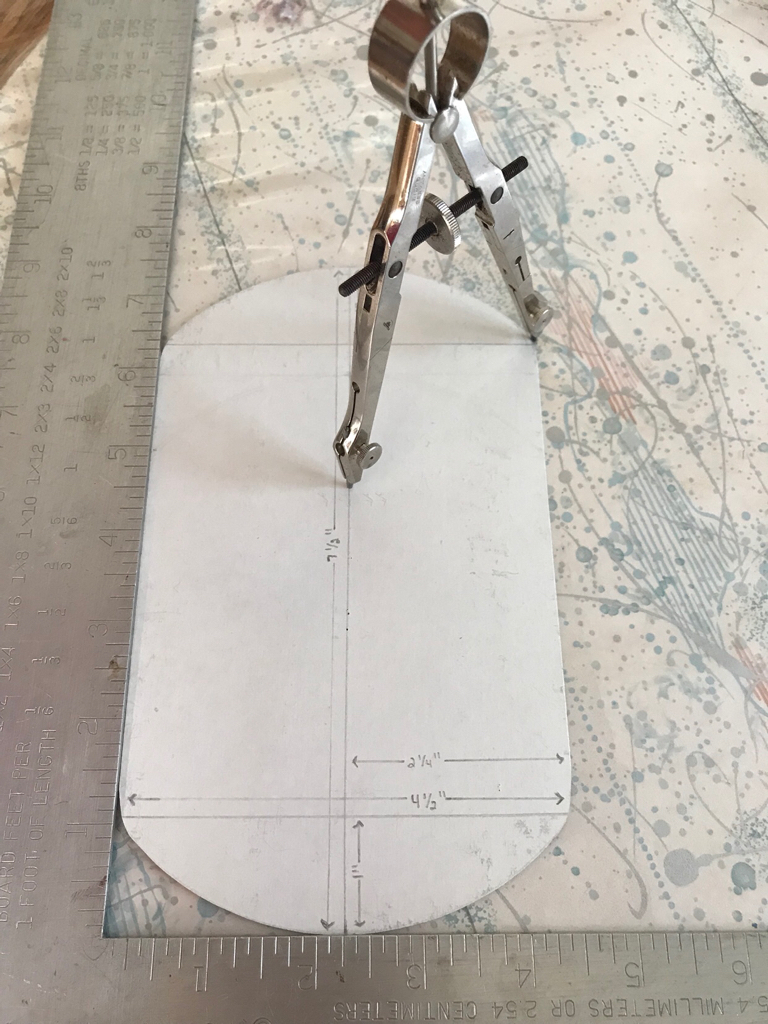 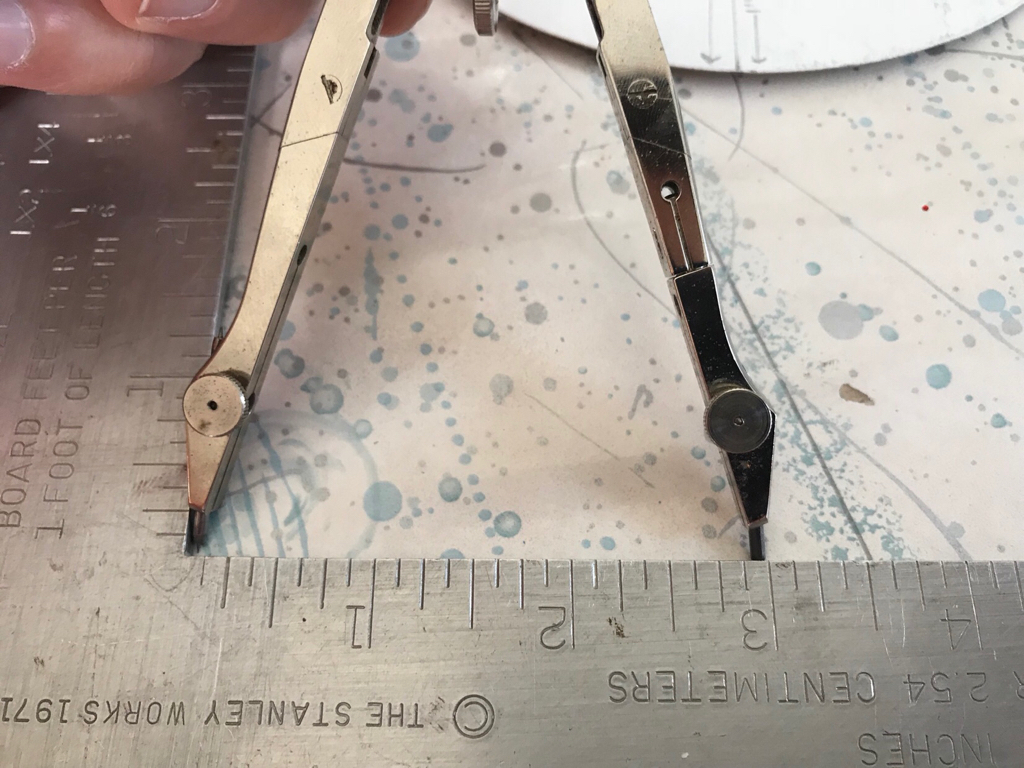 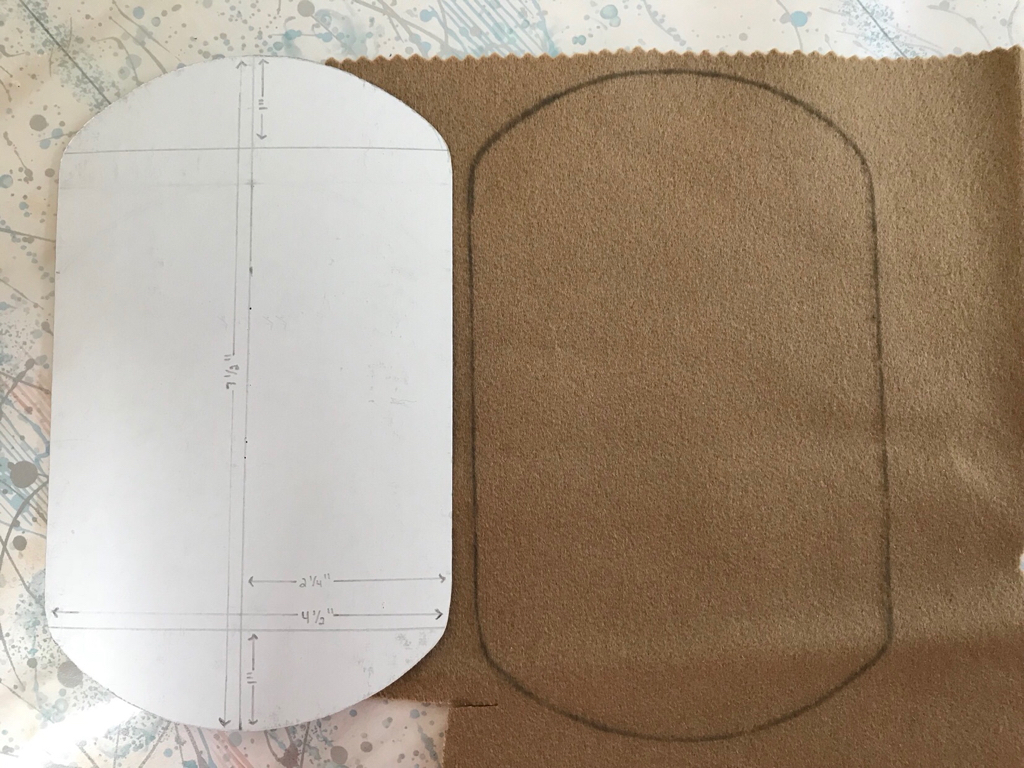 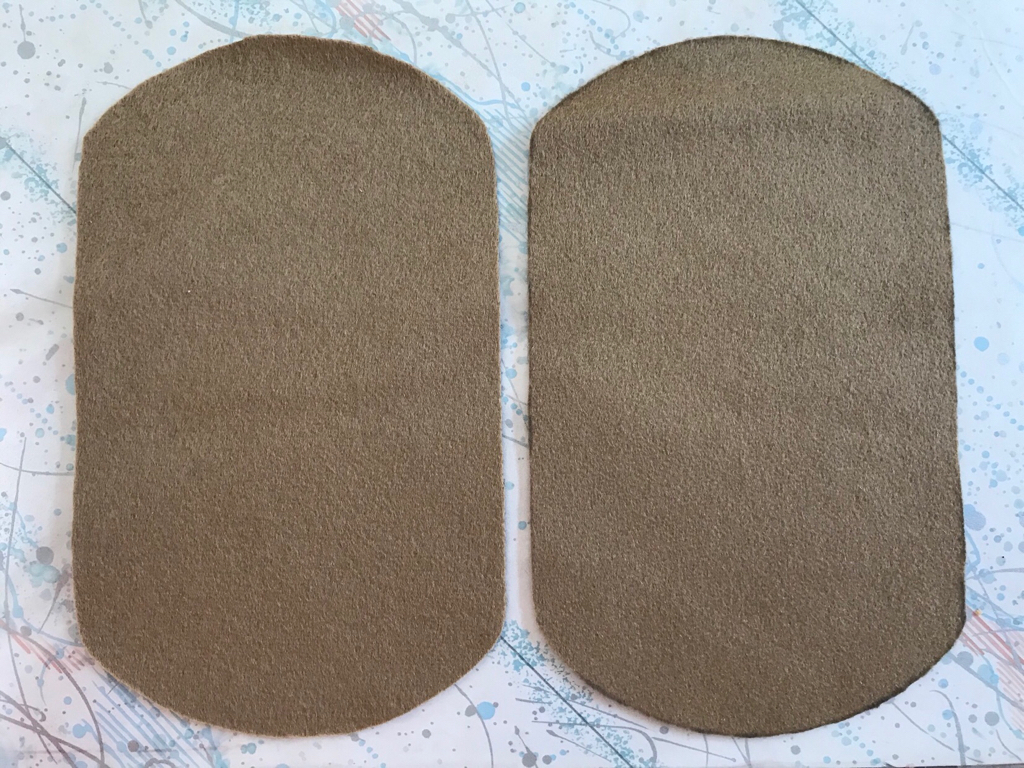 Using some needles, I positioned the elbow pads the best that I could, again using the screen grabs as reference. I chose to place the pads immediately above the long cuff seams, which coincidentally seem to align with my elbows. I think the pads seem slightly higher up the sleeve than those worn in the movie, but this is a negligible difference because I did not want to overlap the pads over the thick cuff seams.

The last step was to sew the pads to the shirt. This is the result: 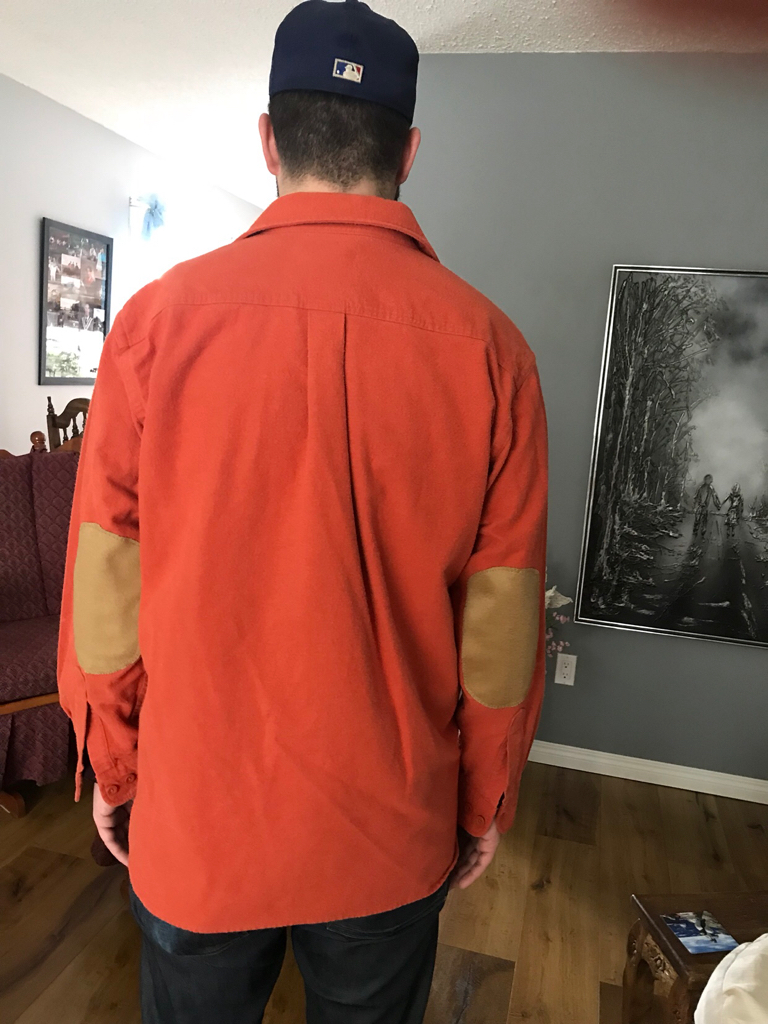 How does it look? What would you do differently?

I am pretty excited to wear it over my uniform in two weeks at the Calgary Expo with the Alberta Ghostbusters.
Last edited by canpara on April 15th, 2018, 2:56 pm, edited 1 time in total.
Matt Campbell, Cythusly, Hasford1978 and 1 others liked this
Member of Alberta Ghostbusters

By Hasford1978 -  April 30th, 2018, 11:12 am
-  April 30th, 2018, 11:12 am#4905306
That's pretty cool well done, great find on the jacket and great effort designing the elbow patches that looks awesome
canpara liked this
For whatever reasons Ray, call it fate, call it luck, call it Karma, i believe everything happens for a reason. I believe that we were destined to get thrown outta this dump
MSN Richiepooh27@hotmail.co.uk

Thank you for the feedback! I hope the pattern will be useful to someone. I really should learn how to create a pattern on the computer so others can simply print one out.

Last weekend at the Calgary Expo, I wore my orange shirt when meeting Lea Thompson (Elaine McFly), Christopher Lloyd (Doc Brown) and Tom Wilson (Biff Tannen) of Back to the Future. 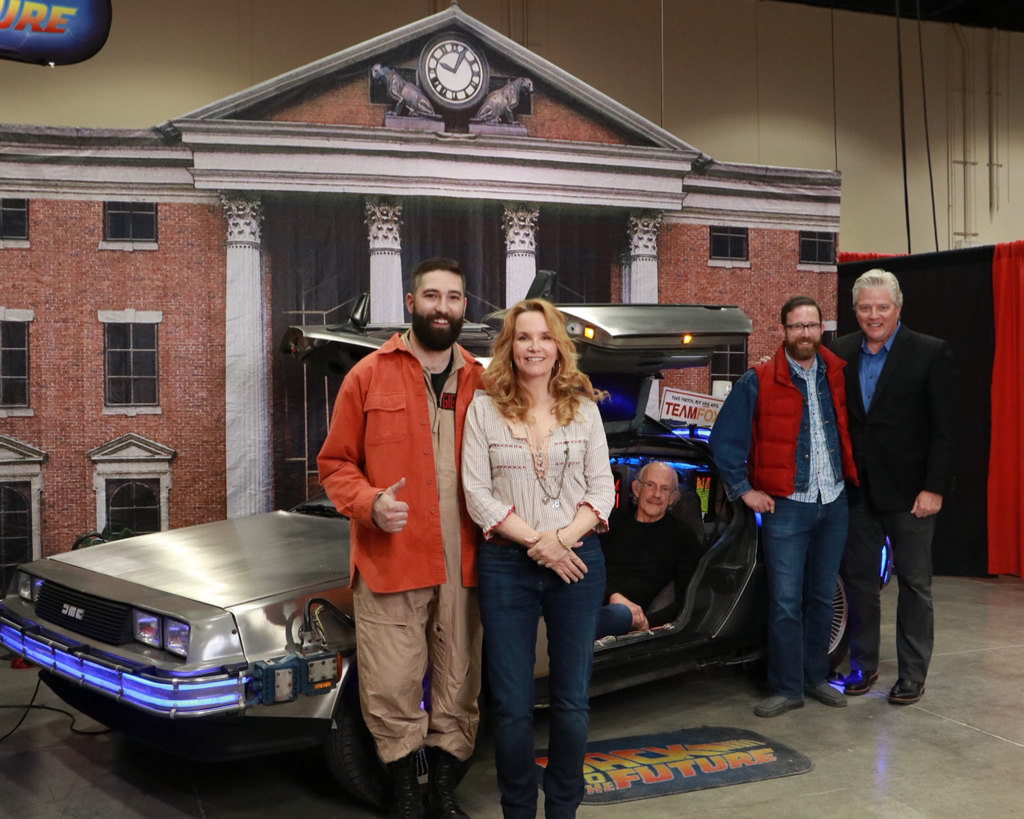 I dunno how you got those reference pics so ea[…]