By Harry Bardwell -  February 11th, 2012, 8:41 pm
-  February 11th, 2012, 8:41 pm#376528
For those not familiar with Star Wars Incredible Cross Sections, its a set of books showing the detailed inner working of ships from the star wars universe not just the ships layouts, but the engines and systems that fictionally made them tick. Well here is my first completed uncolored rough for the EGB proton pack. I'll be doing more refined versions and having it colored, I'll also do the gun in far more detail than it is here. I mostly used the part names from norm's plans as well as a few I've heard thrown around the boards and certain websites, and the remained I just made up.

I though the idea up originally because someone a whiiiiile back posted about making a pack so you could see the insides like a reveal lightsaber, and its been in my mind ever since, but it would be cheaper and faster for me to draw it than build it. When I started sketching I decided to make it an EGB pack instead of a movie pack so I could explore a few of my own Ideas about how the EGB pack could function.

So please be it good or bad let me know what you think, but do keep in mind its only a rough draft not the final product. 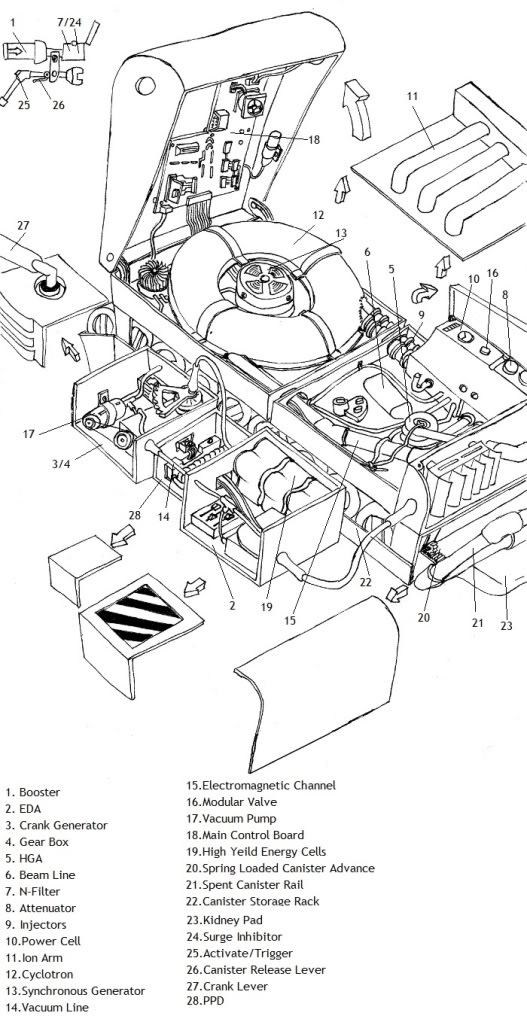 Thoughts, Ideas, Comments, Questions?
Last edited by Harry Bardwell on February 22nd, 2012, 8:49 pm, edited 2 times in total.
Buckfutter liked this
Ever wondered what the inside of a proton pack looked like?


Sent from my MT-500 using Tapatalk

Also this one gets a technical explanation, due to the rough nature of the drawing and the fact that I have more info to convey about this particular piece than a simple drawing can do 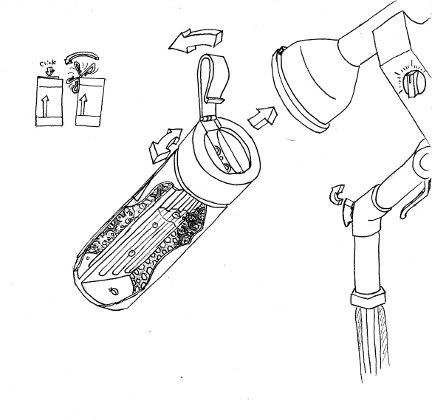 The end which is inserted into the gun body has an orange no symbol on the top (similar to the other end). By pressing the cross bar it will flip up, revealing the ports for the material inside, also the cross bar acts as a alignment clip to insure a canister goes in, in the proper direction, and also to clip the canister to the spent canister rail.

A spare "clean" canister is carried on the spent canister rail on the pack, usually denoted by the carribeaner holding it on instead of the clip, perfect for collecting uncontaminated slime samples or using as a mini slime blower if all other canisters are full.

Also, the entire canister can be rotated around the top orange end cap, this can either cut off the flow of liquid or reverse the charge (potentially dangerous to do).

Ok what do you guys think? and have i missed anything with the canisters?
Ever wondered what the inside of a proton pack looked like?

, and with any luck I'll have JoeyBaggz helping me out with this, so its turning into a collaboration. On that note of course if anyone has any suggestions to make about what I've already presented please let me know I'll take it all into consideration. 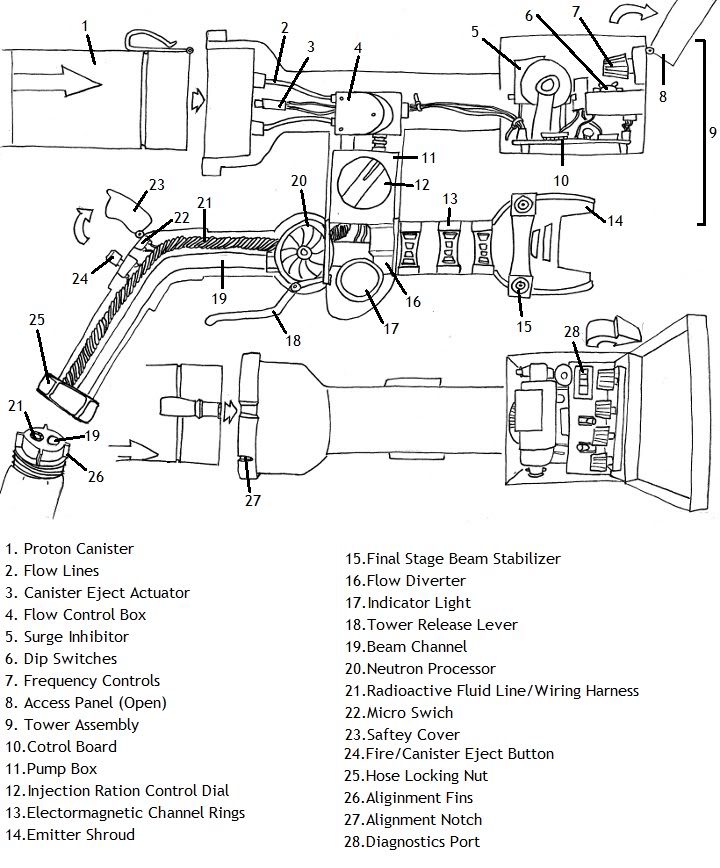 As before this is just a first pass the final will be better and in color.

Yes I have taken into account that these can be used as a mini slime blower, and have taken into consideration that the surge inhibitor can be removed, and even replaced with similar looking parts designed to alter the mix ratio of positive and negative uranium, for firing in heavy precipitation, or to be used with the fusion adapter parts (those to be drawn later). Also note the N-Filter has been removed and replaced with an upgraded Neutron Processor, has the same basic function, this one is just better.

By flipping up the safety cover from the fire switch, it triggers a micro switch, which is like hitting the on switch on the movie throwers. The "Fire" button beneath the cover, not only fires the gun, but when the Tower is unlocked and swung down for loading a new Proton Canister, it then becomes the Canister Eject Button to allow for hands free canister removal if need be.

The wiring now runs through a sort of ribbon cable that is wrapped around he main flow line leading to the pack, this wrapping both saves space, and protects the wires, and flow lines from kinking up.

This makes the gun agree with 99% of whats seen in the whole show as far as I'm aware. Please let me know what you think of any of this, I love feedback. Also a giant thanks to JoeyBaggz for helping me out with some of this. Now that the whole pack is roughed out, I'm unsure to continue roughing out the rest of the gear, or try and get these done fully, and colored then move on.

Btw, It was a total coincidence that both the gun and the pack have 28 labels a piece.

Thoughts, Ideas, Comments, Questions?
Ever wondered what the inside of a proton pack looked like?

Sent from my MT-500 using Tapatalk

Reply
Return to “Ghostbusters Cartoons”
25May