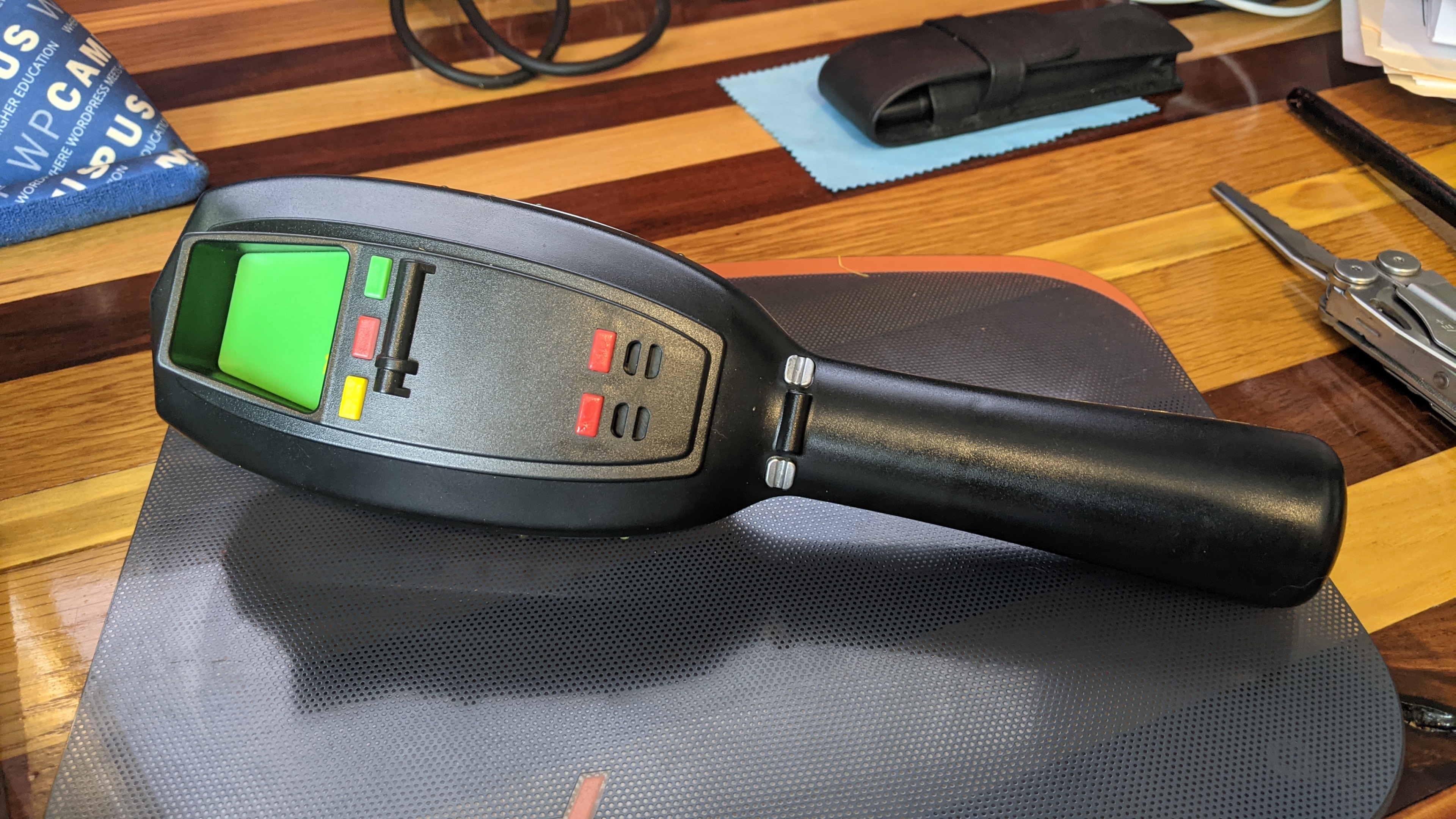 The infamous Walmart PKE in all its inaccurate glory. How much better can we do than this? We'll see. 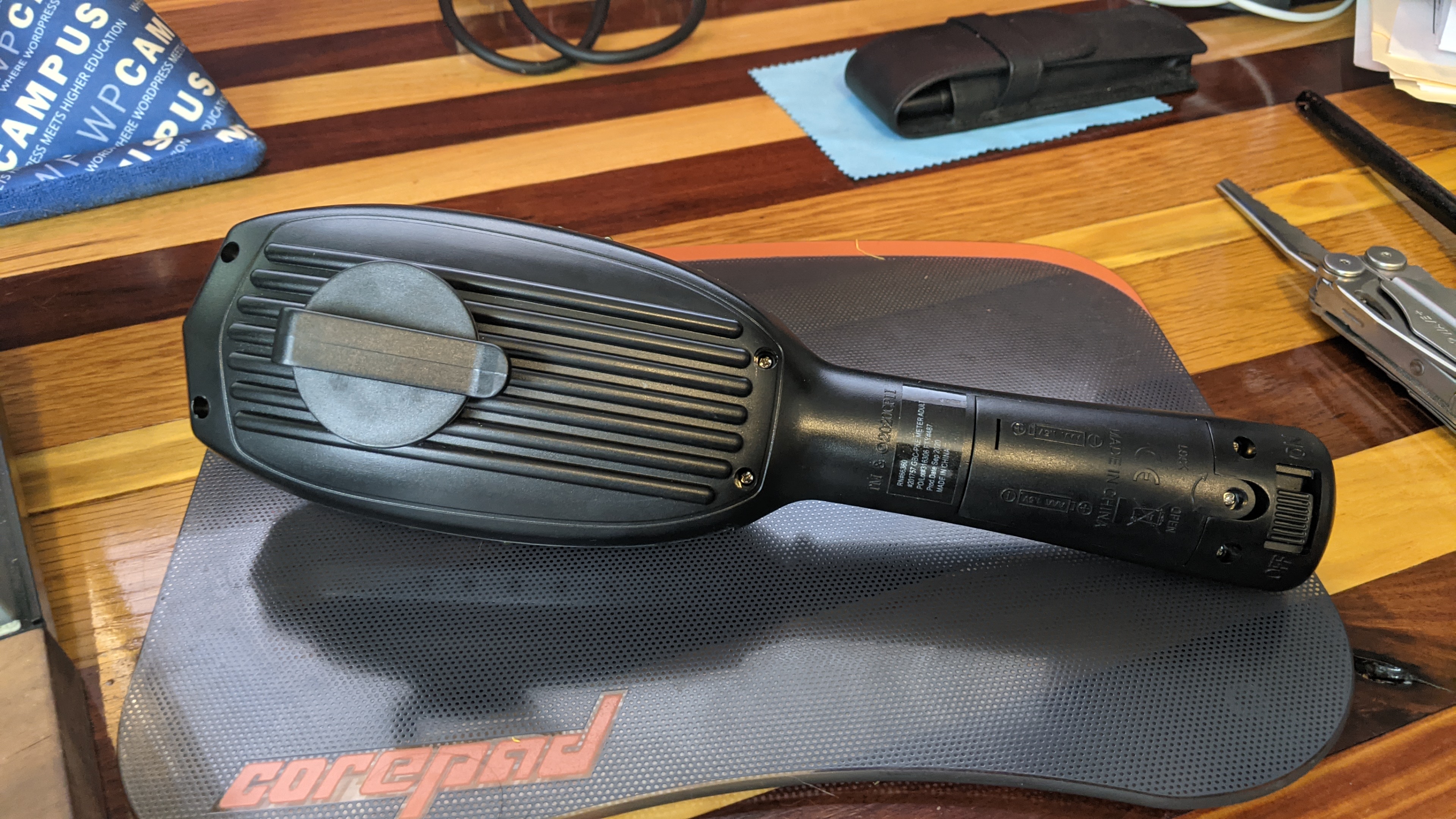 The back just makes me sad. Very sad. Obviously the belt clip has to go. As do the stickers and all the text. The power switch is placed wrong, and the battery door isn't accurate. 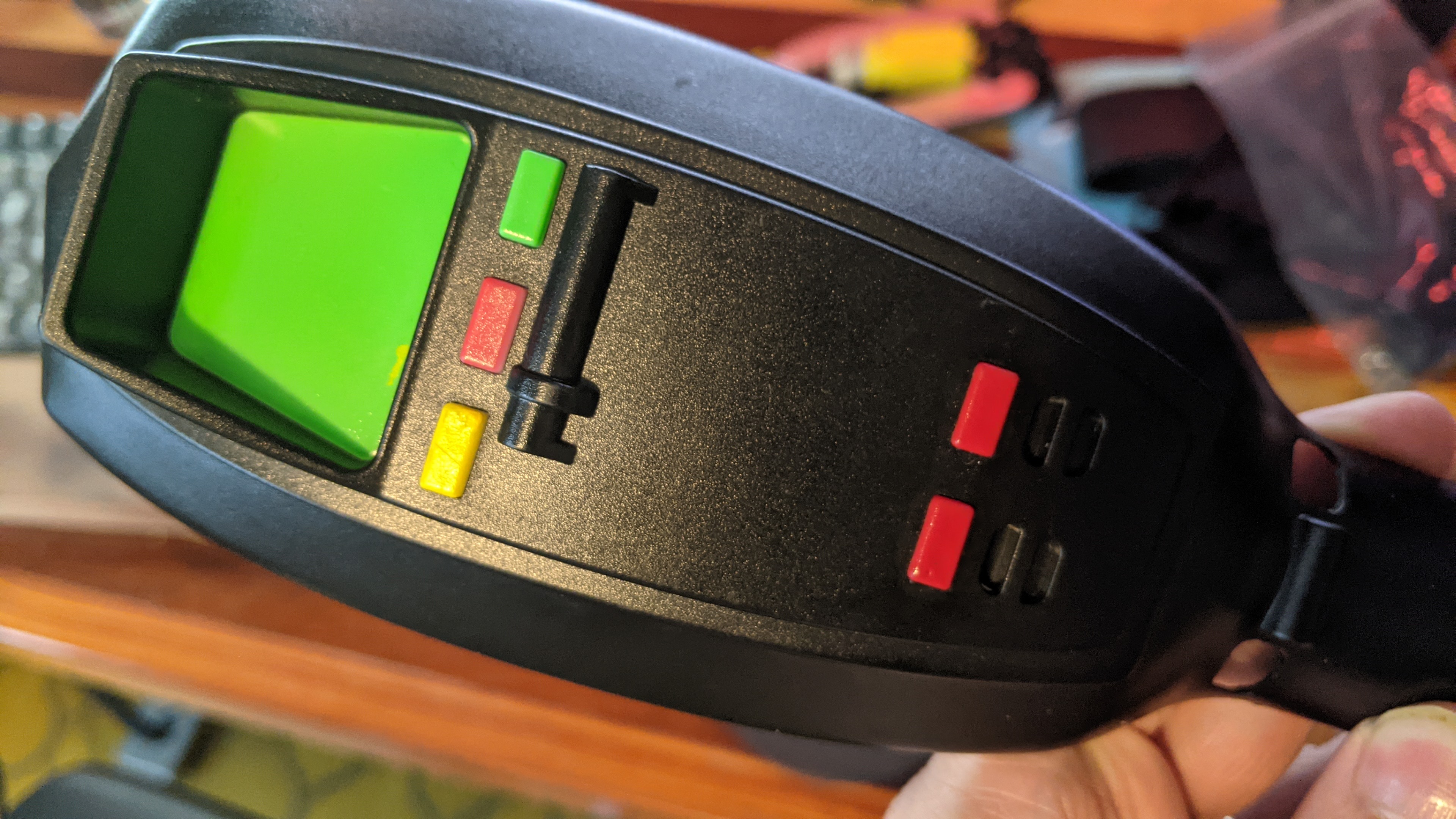 The "LED" lenses are problematic. I'd like to replace these with more accurate, smaller rectangle LEDs, but I'm worried about the being able to mod them into the board. Also, the screen shouldn't be recessed. I anticipate I'll have to compromise a little here. 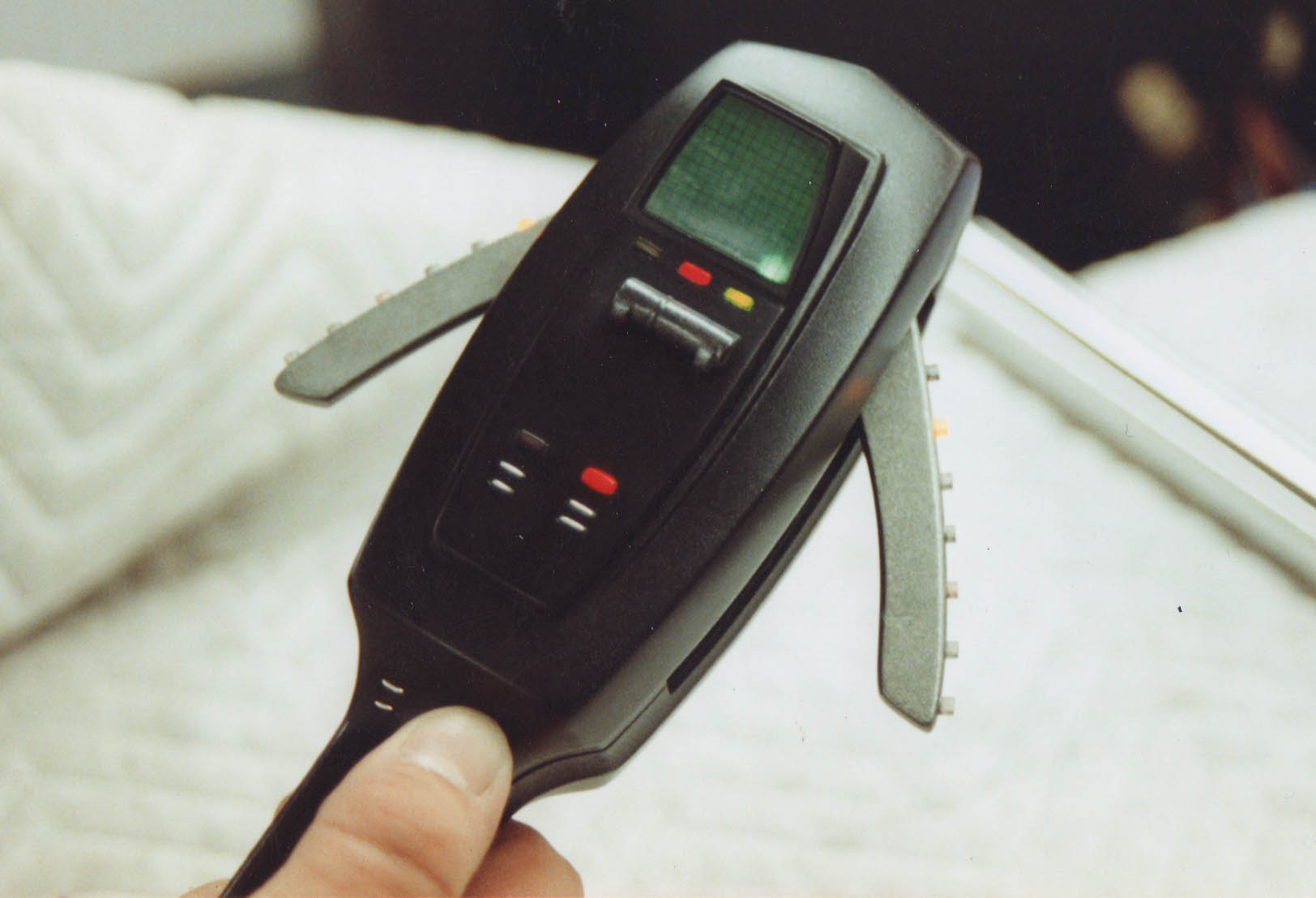 REFERENCE: You can see here the lights are MUCH smaller. Also of note are how squared off the ends of the wing LEDs are. 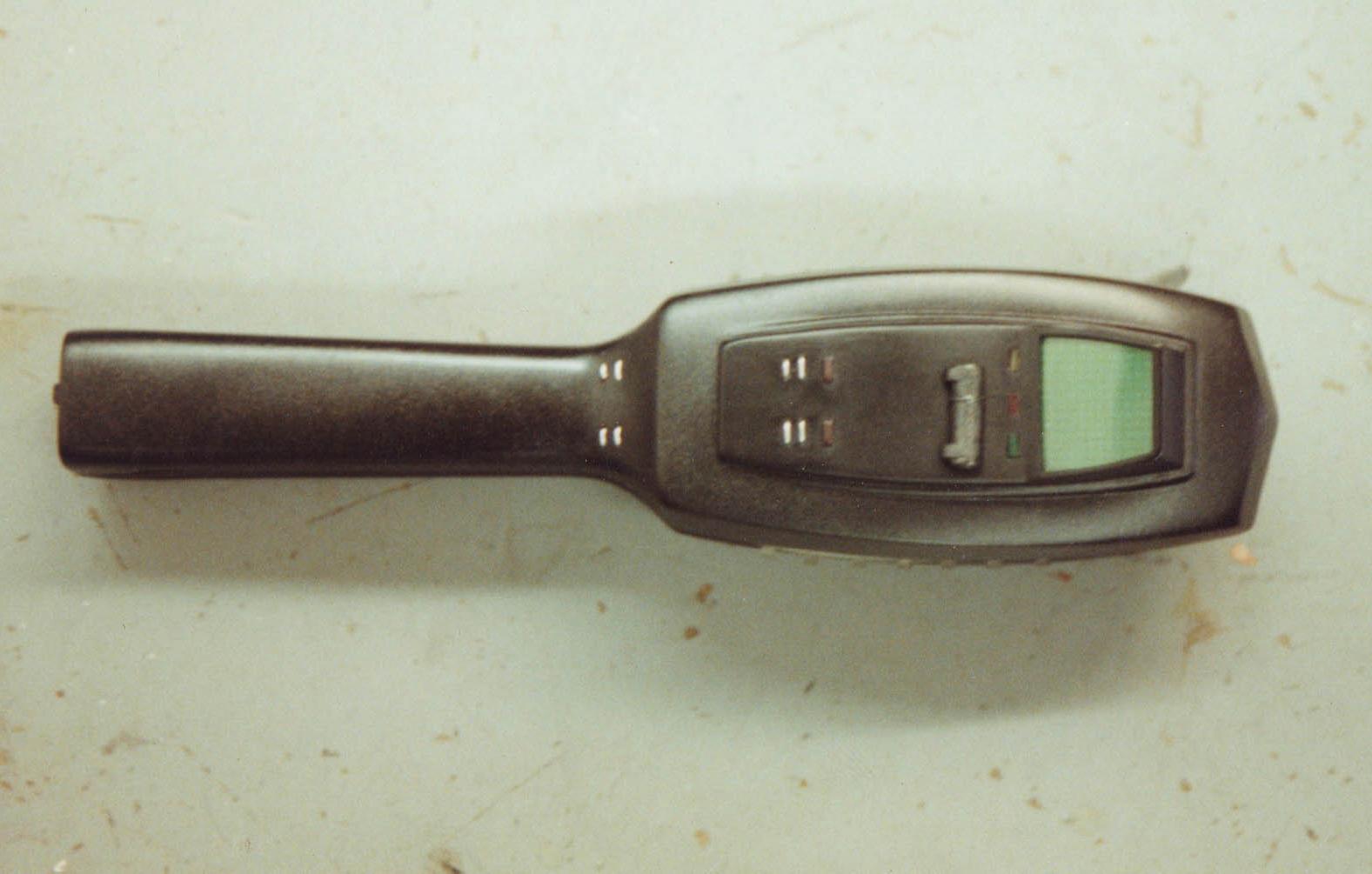 REFERENCE: There's also clearly nothing between the thumb buttons on the handle, so we'll get rid of that. 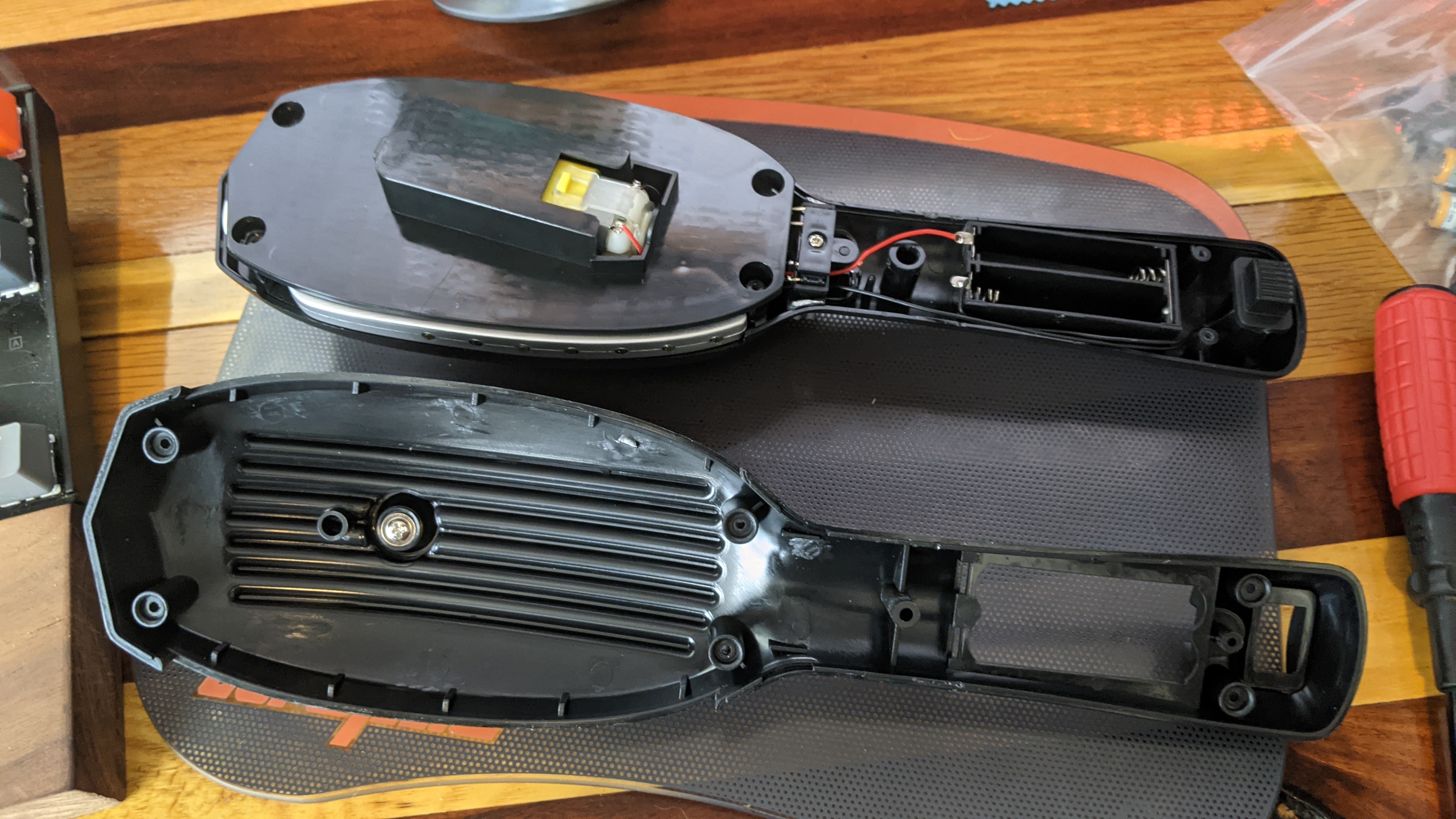 Strip it down! The belt clip is easy to remove, but will take some work to hide. the stud in the middle of the handle has no screw on it, but does make it friction-tight when disassembling. That can be eliminated. 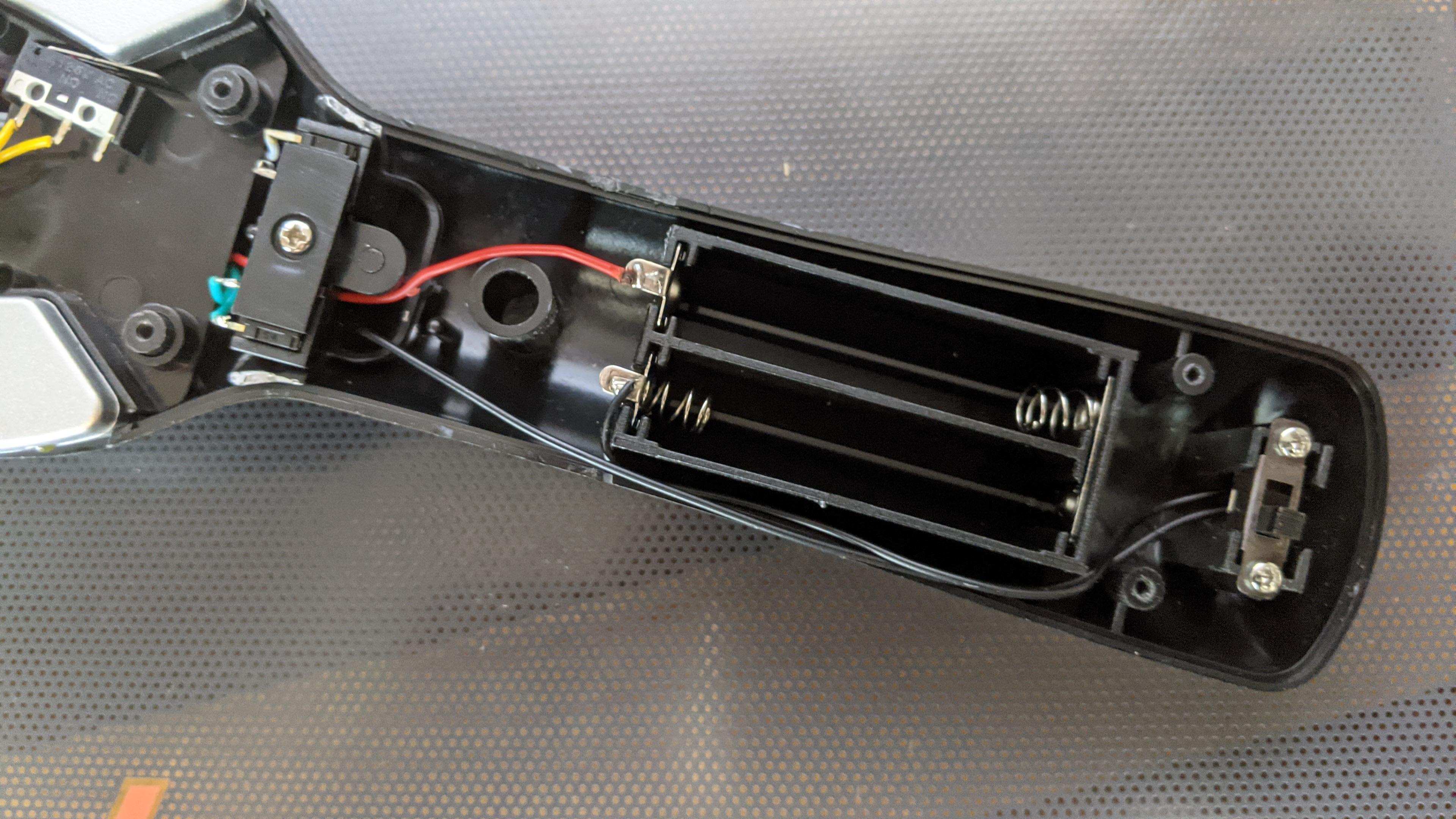 Not much to the handle. We'll gut this and put in a "real" battery. The battery compartment can be eliminate entirely as a consequence. 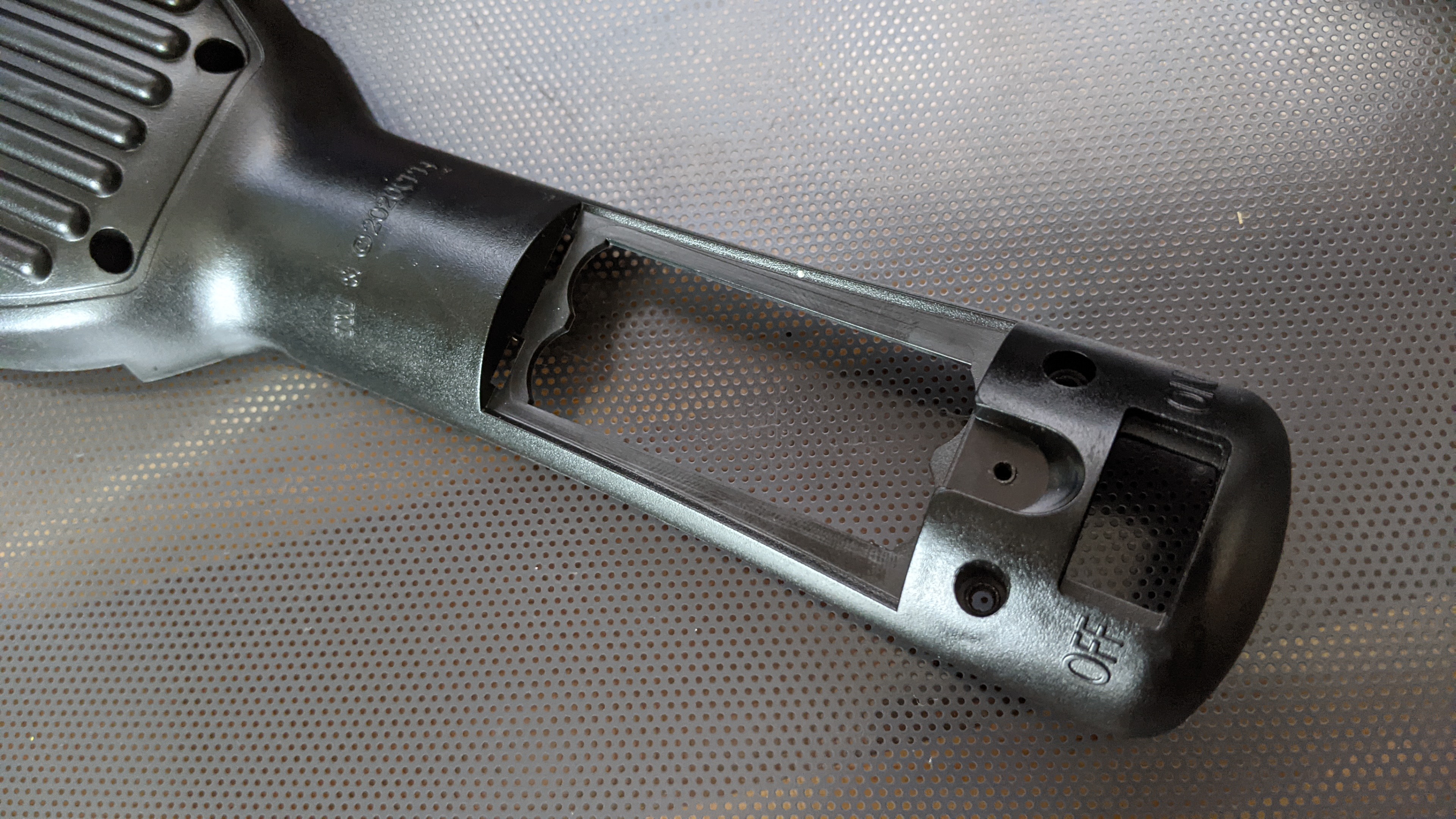 We'll sand down all the imprinted text, and seal off where the battery door and switch originally were. The handle should also be more square. This will be a tougher ask, but I think we can pull it off. 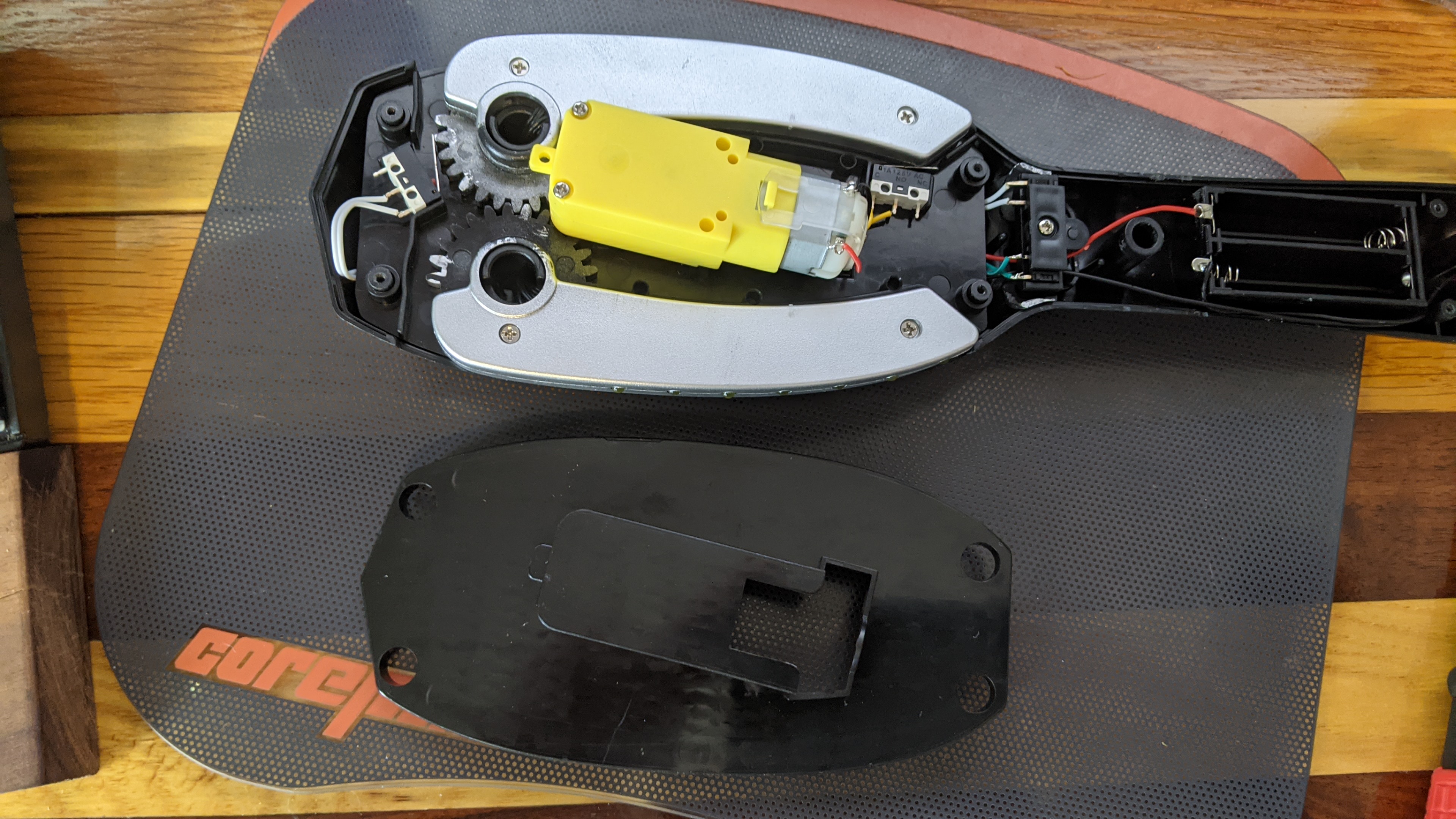 Shield off, full view of the wand arms and motor. The big problem with the wand arms besides the LED order is the thickness of the arms. We might need to totally recreate them from scratch. 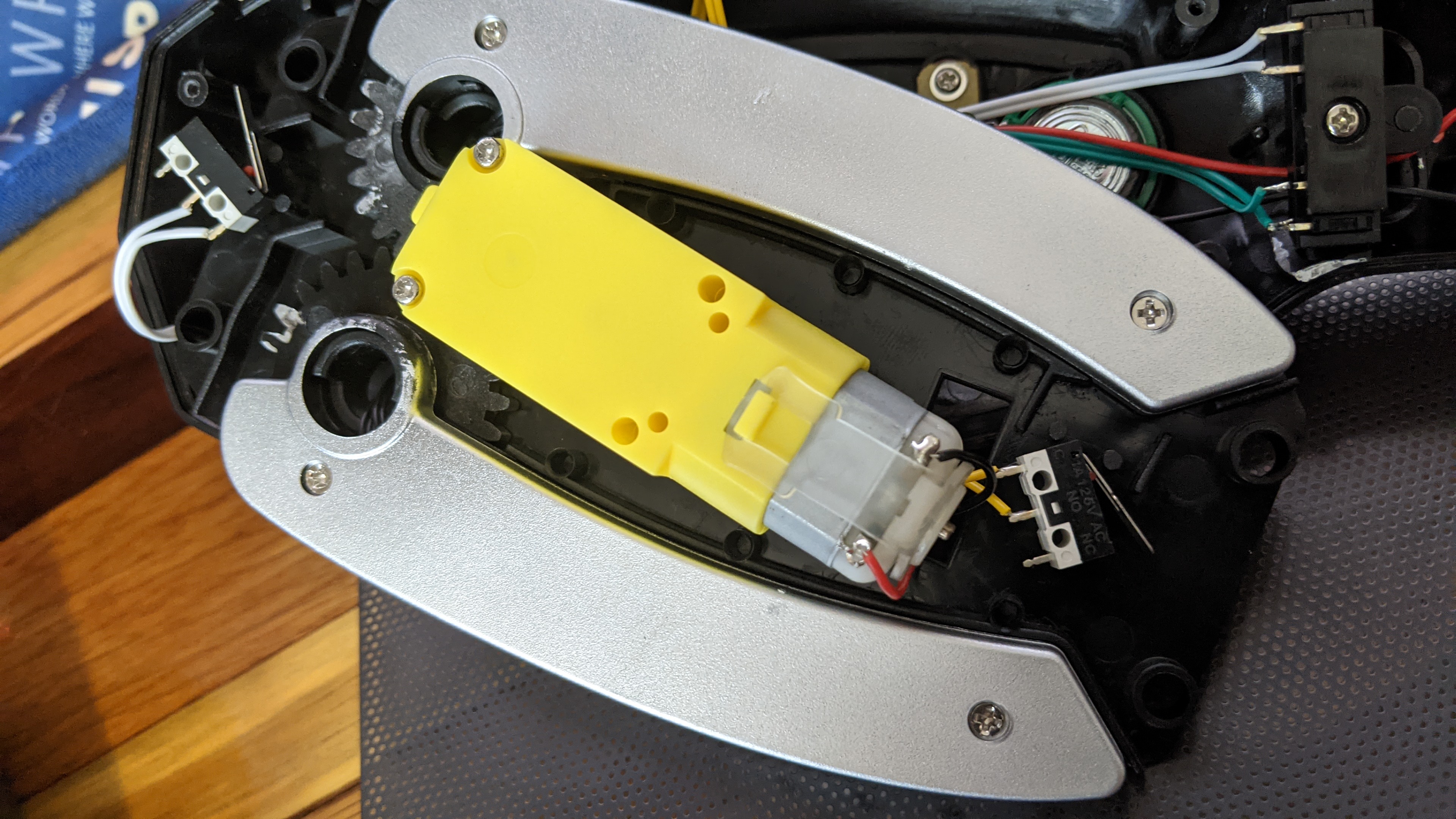 The contact switches just friction mount on two studs. A firm grip and some needlenose pliers will pull them free. 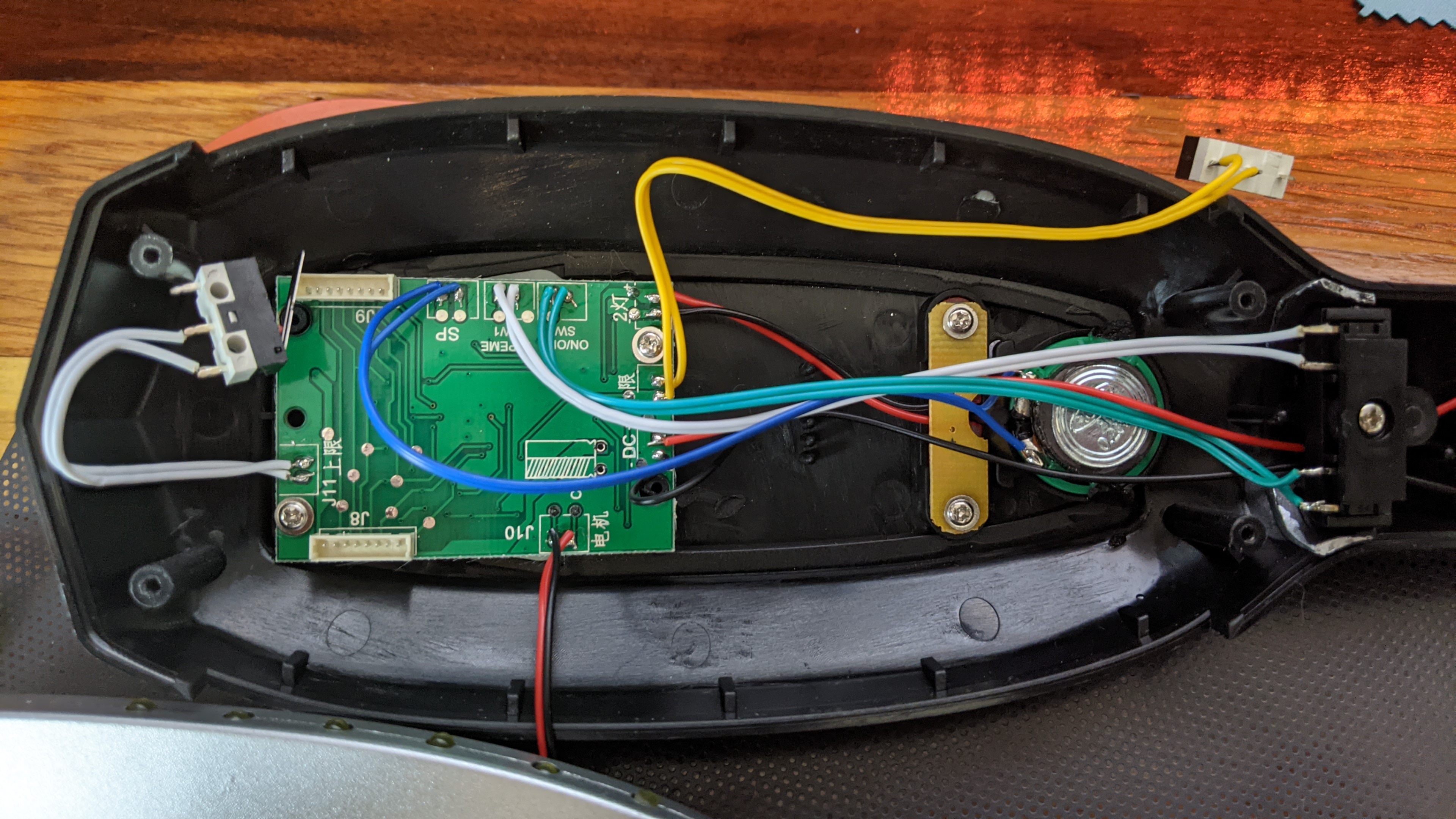 Underneath, everything is pretty delicate, which is a polite way of saying "cheap." 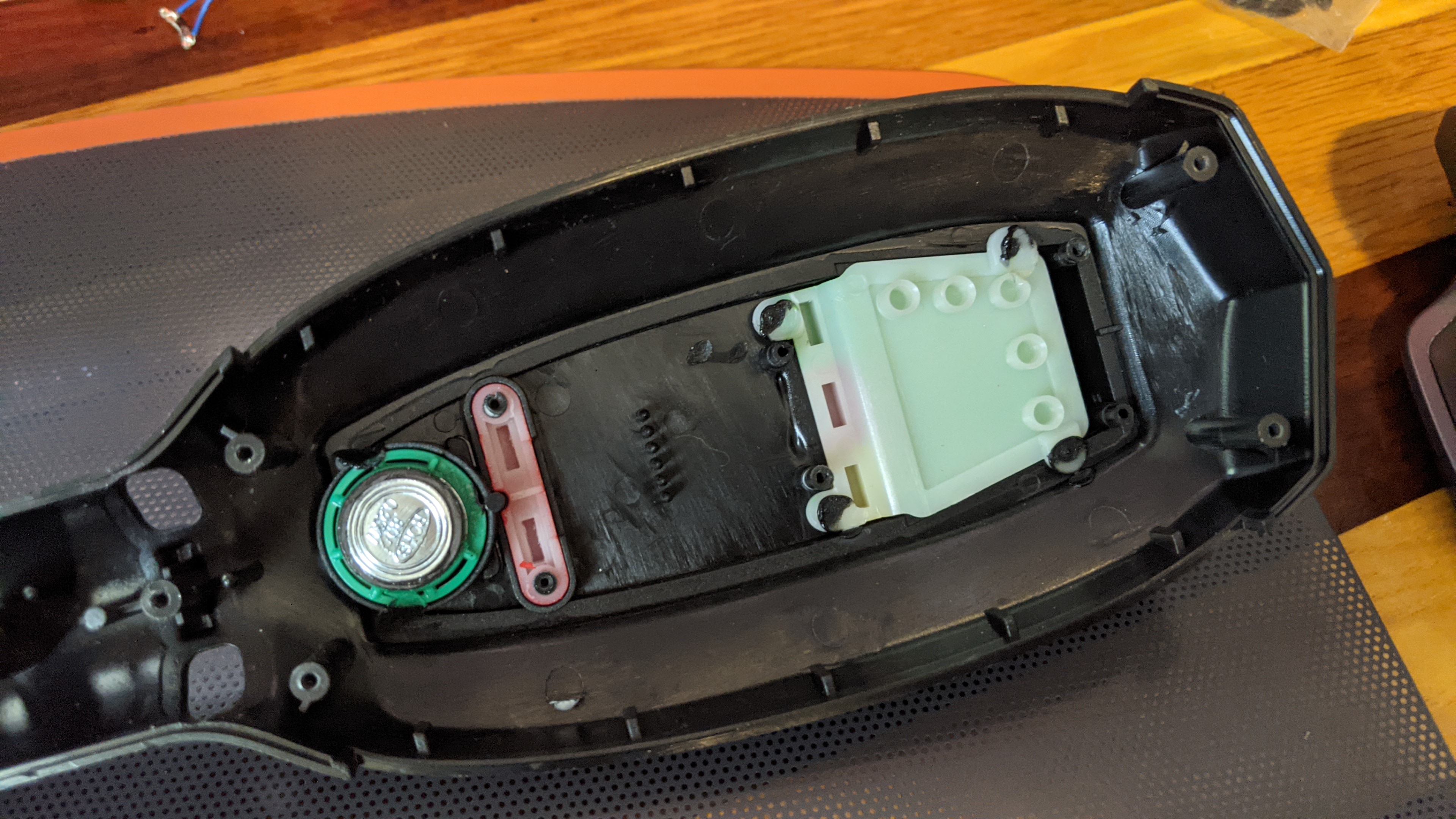 See how that speaker is there with no wires attached? That shouldn't be the case. But it was "delicate." By which I again mean "cheap." The wires popped right off, and now it's totally useless. That's not saying much, since the sound board is legitimate garbage anyway. I also love the five channels for LEDs on the screen. Why? because there are seven LED's on the circuit board. This stuff is all heat welded into place, gonna have to Dremel it out. 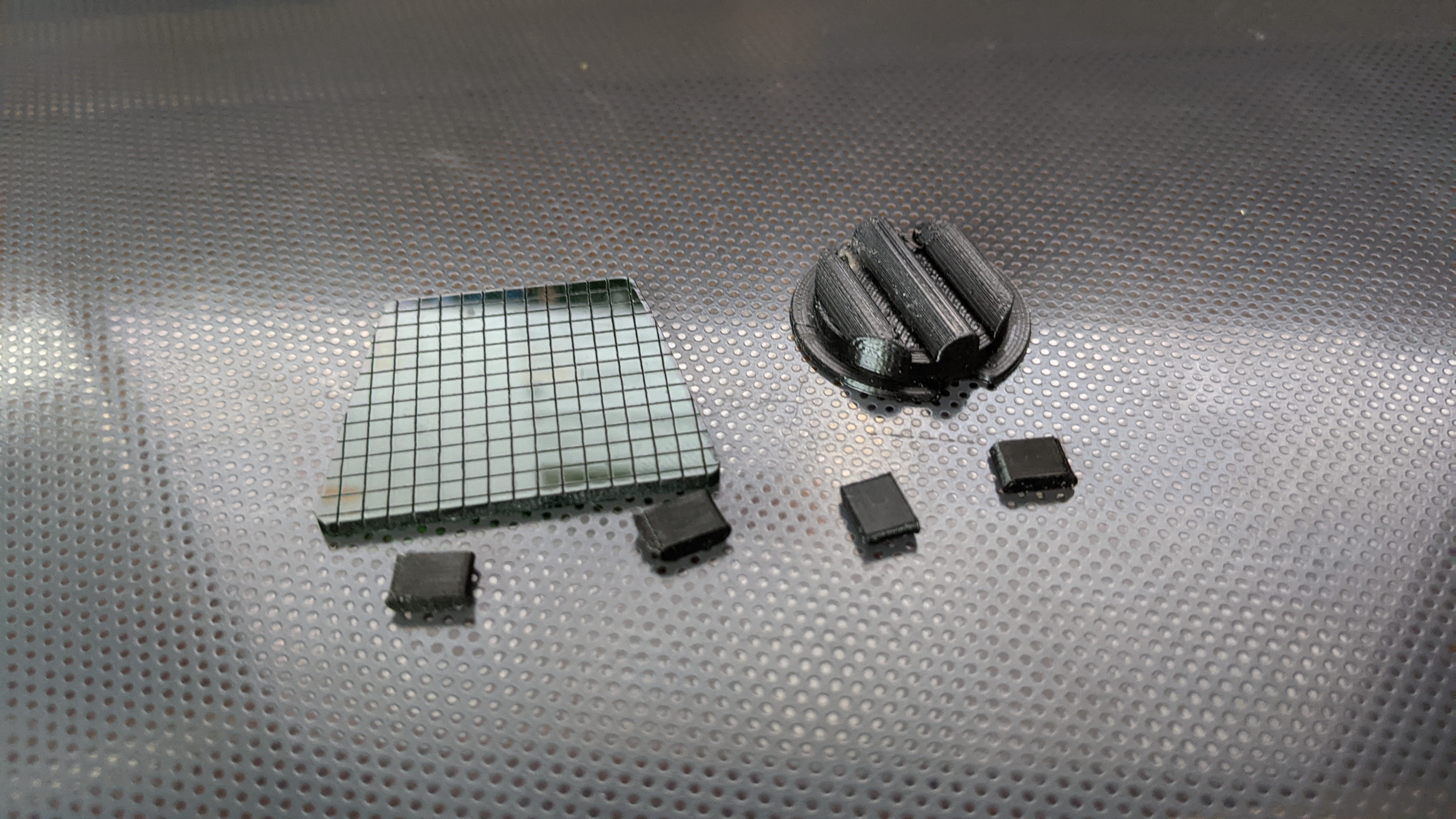 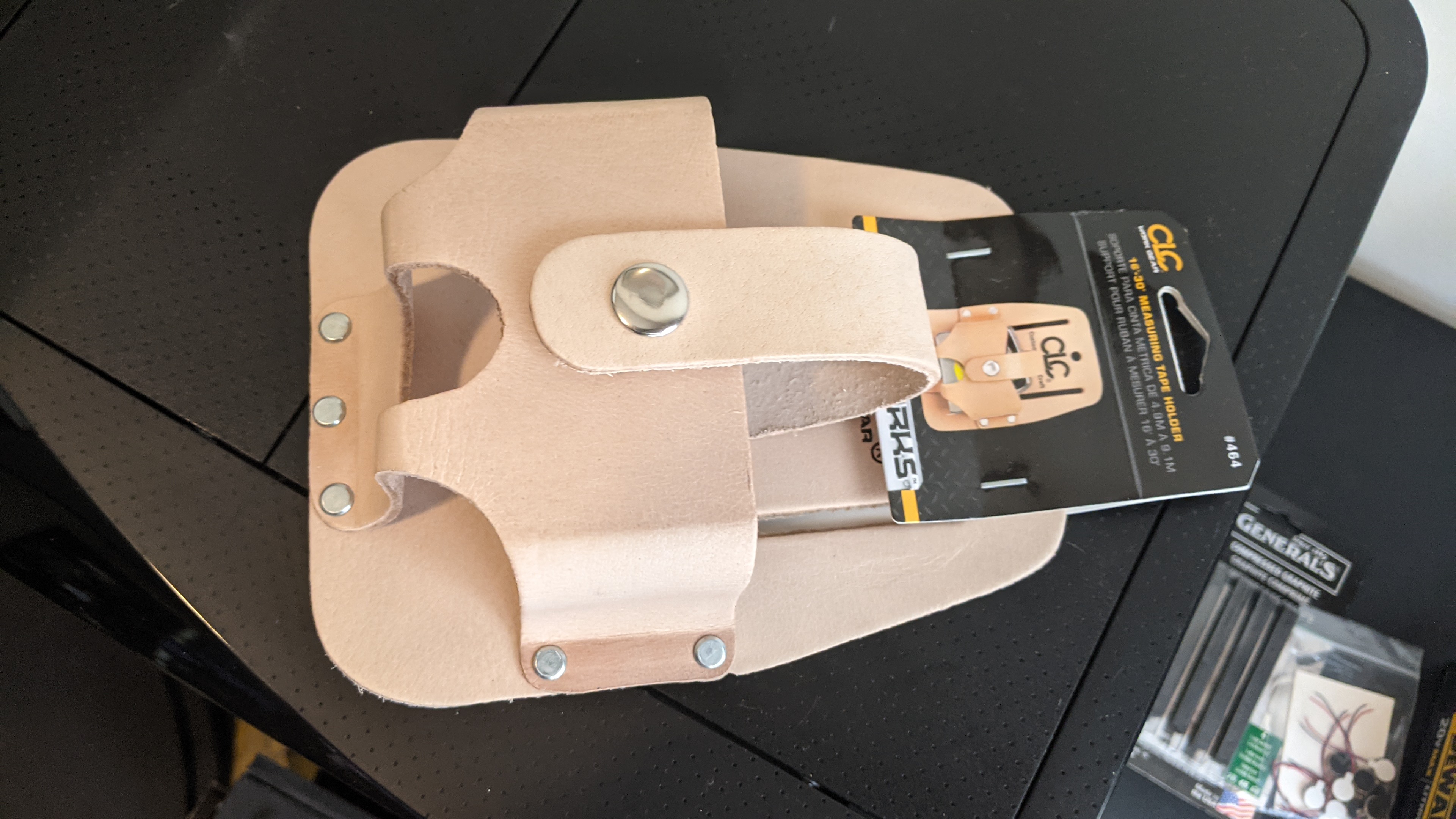 Got the holder in that will be the basis for the holster. This will get chopped up a bit to fit the PKE, and stained black to match everything else. 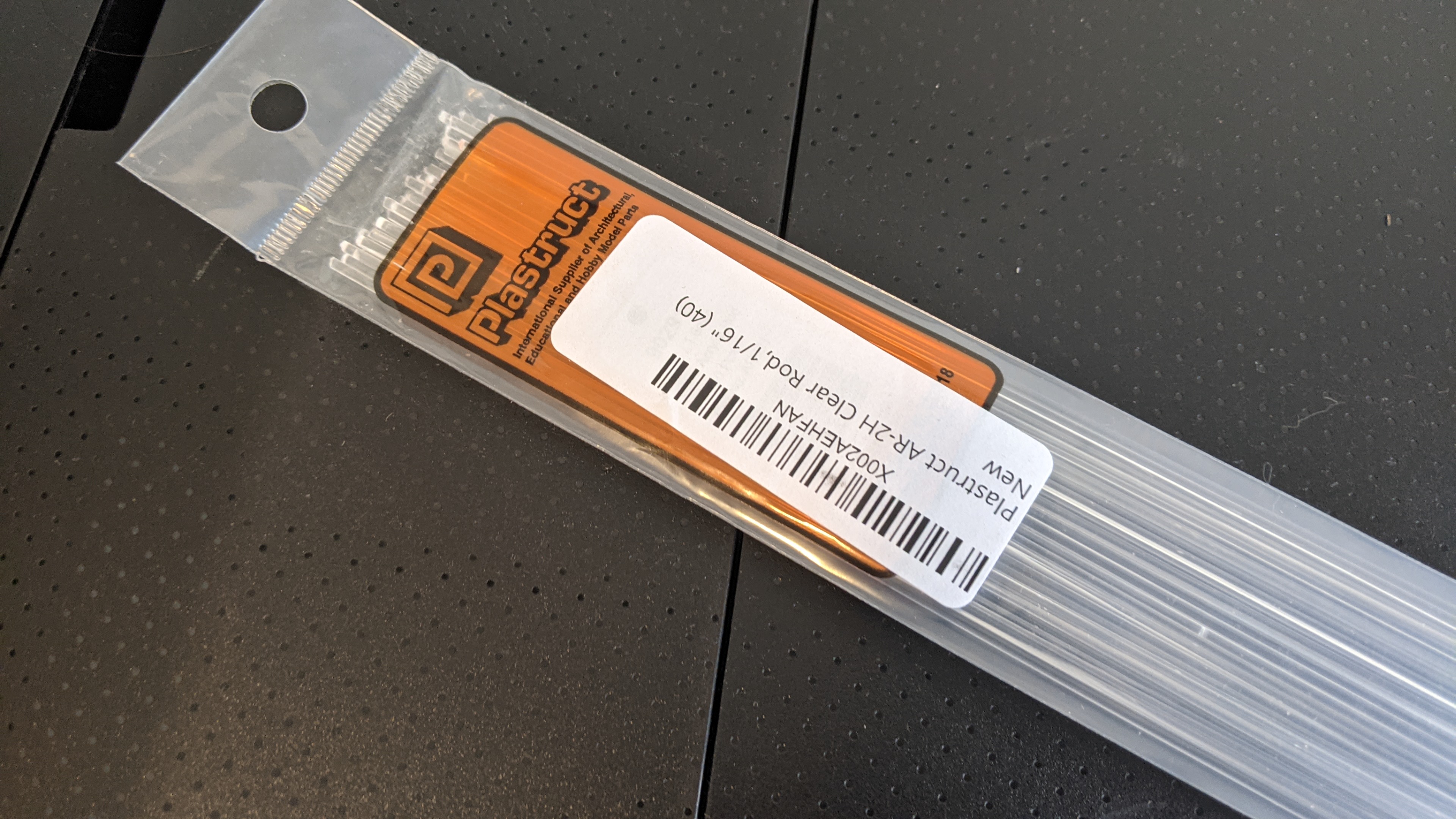 This will be interesting. So, the existing screen only had 5 holes for the 7 LEDs behind the screen. And those LEDs are surface mount. The new screen will sit up at an angle like it should, which means that the LEDs won't be up against it. My solution is going to be interesting. Because the LEDs are surface mount, and I don't want to try removing them and soldering leads to the board for new ones, I'm basically gonna do it like fiber optics, using these rods to channel the light up to the screen. I'll design and 3D print a backer plate that will hold them in place and line them up from the main board to the screen..
Nighty80 liked this
My Stuff: 3D Printed Mk 2.1 Q-Pack Build Thread | Putting together my Magnoli-based uniform | 3D Printed Motorola MT500 Build Thread | EctoLabs Gizmo 8400 Build Thread 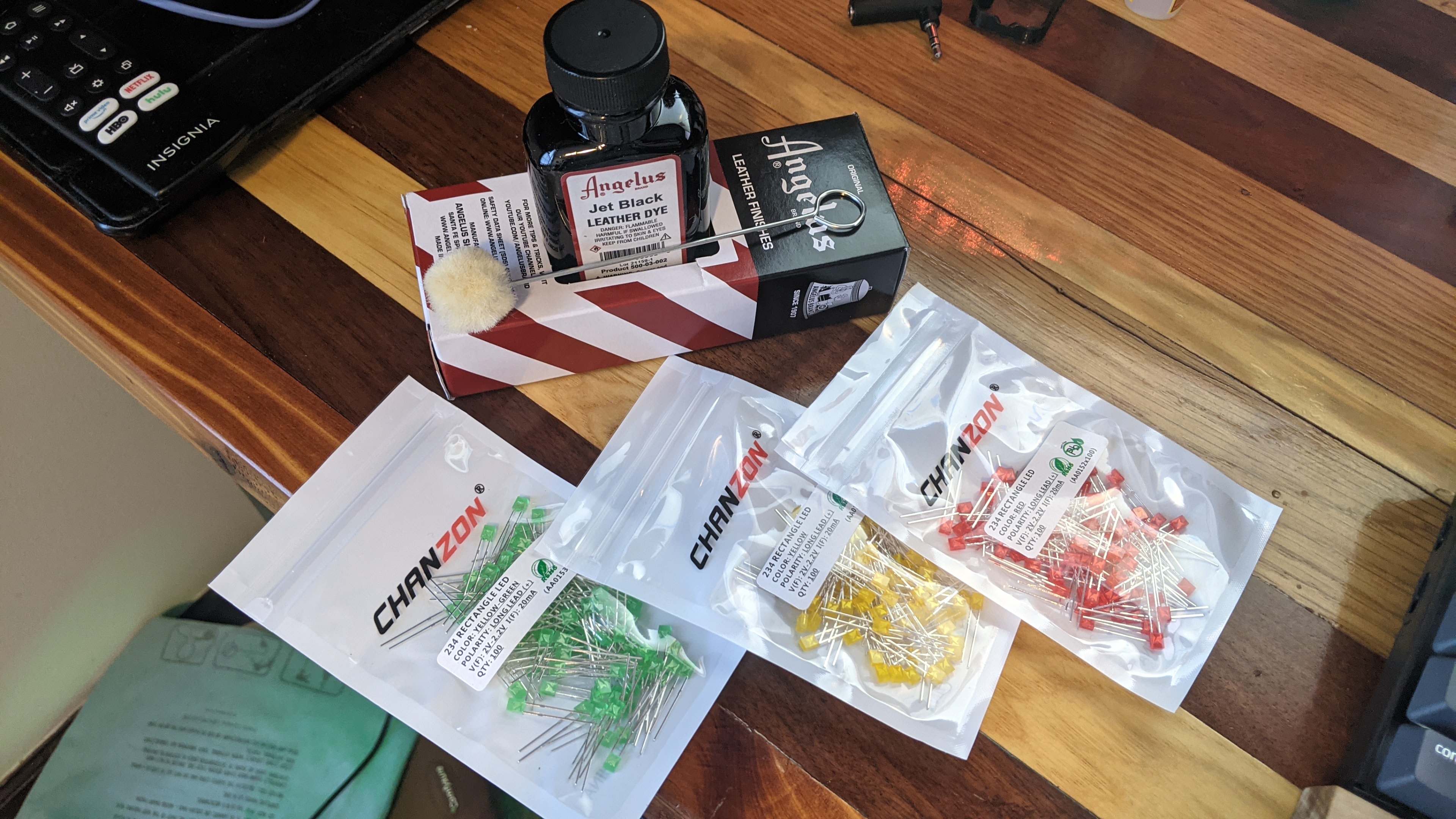 More stuff coming in. Black leather dye for the holster. I'll do this later in the process, once I'm closer to being done to make sure I cut up the leather to fit the meter correctly. With it all torn apart, I'm worried I'll measure wrong. The LEDs will, hopefully replace the current molded in ones on the shell. These should be closer to the correct size for the prop, but I also need to spend some time checking voltages to see if it all will work together as is, or if I need to throw in some resistors.
My Stuff: 3D Printed Mk 2.1 Q-Pack Build Thread | Putting together my Magnoli-based uniform | 3D Printed Motorola MT500 Build Thread | EctoLabs Gizmo 8400 Build Thread

Wanted to know who are the terror dogs hosts? […]

I reached out to Prop Store a few days ago, and un[…]