Hasbro, Sony and IDW team up to unveil Ectotron and "Ghosts of Cybertron"

Hasbro, Sony and IDW team up to unveil Ectotron and "Ghosts of Cybertron"#4915455 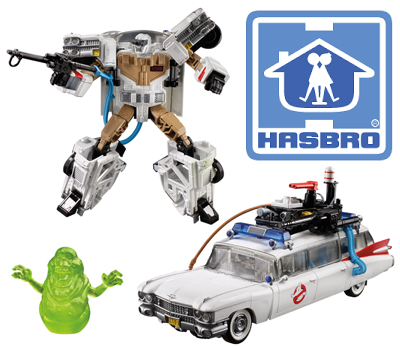 Certain to be the community event of the summer, toy manufacturer Hasbro, comic publisher IDW, and Sony Pictures have teamed up to give us not just one Transformers/Ghostbusters product, but two.

Kicking things off will be Hasbro's production release of Autobot Ectotron, an Ectomobile that's more than meets the eye.

The release of the figure will be followed-up by a previously-"top secret" project, which has been revealed to be a five-issue origin story for Ectotron, Ghosts of Cybertron. The miniseries, written and illustrated by the Ghostbusters: Ongoing team Erik Burnham, Dan Schoening, and Luis Delgado - will see the Ghostbusters and Autobots fight the Decepticons due to paranormal circumstances that'll link Earth and Cybertron.

Ectotron is expected to go on sale for $49.99 this summer, exclusive to GameStop, EB Games and HasbroPulse.com, with a projected release date of this Summer.
Ghosts of Cybertron will go on sale this June.
Theoderic, MasterOod liked this
What would Ryan do?

Re: Hasbro, Sony and IDW team up to unveil Ectotron and "Ghosts of Cybertron"#4920747

Reply
Return to “Ghostbusters News”
30 May