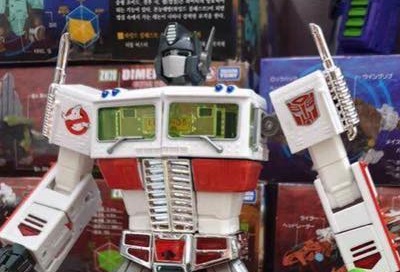 Hasbro's Ectotron figure is still a little over two months away from general release, yet it looks like he'll have company in slugging those pesky poltergeists with the upcoming specially-decorated release of Optimus Prime.

Ecto-35 Edition Masterpiece Optimus Prime is packaged in a wearable, Proton Pack-themed box, and includes the following accessories:
•Ghostbusters-themed trailer (large enough for Ectotron to park inside)
•Roller (with combinable Ghost Trap section)
•Slimer (A more detailed version of the one included with Ectotron, which will fit atop Roller's Ghost Trap assembly)

I hate fighting for SDCC exclusives...
mrmichaelt liked this

I hate fighting for SDCC exclusives...

SDCC exclusive? <puts cash back in wallet> Good luck to those will still try to buy it at mark up prices.
Ghostbusters IDW Sales Chart (Updated for March 2020)

Hard to see Ecto 35 as anything other than a cynical comic-con cash-in. Already fetching $300+ on ebay.

"I also found a way to get slightly more accu[…]