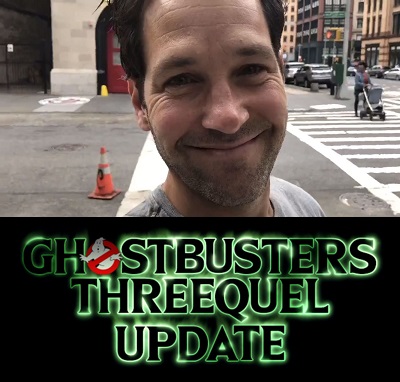 Ant-Man actor Paul Rudd took a pilgrimage to Hook & Ladder 8 today to reveal a bit of news, that he'd been cast in Jason Reitman's upcoming sequel to Ghostbusters and Ghostbusters II.

Full details about his exact role are currently shrouded in secrecy, however Variety reports he will be playing a teacher in the new film.

The news is likely to prove a popular decision, as Rudd has often appeared on "fan cast" lists over the years.
Glenn Frederick, mrmichaelt liked this
What would Ryan do?

Re: Ghostbusters threequel update - Who you gonna call? Paul Rudd!#4920020

Re: Ghostbusters threequel update - Who you gonna call? Paul Rudd!#4920034

This is awesome. He was on my dream team for the 2016 reboot. I'm curious who he'll play.

He was on mine as well as well as for the various iterations of GB3 before.

Re: Ghostbusters threequel update - Who you gonna call? Paul Rudd!#4920059

Thats awesome. Mine is 3d printed so i think […]

You are a saint! Thank you!

I'm wondering if the reason a ghost hasn't been sp[…]