Max von Sydow, the voice of Vigo has passed away

Max von Sydow, the voice of Vigo has passed away 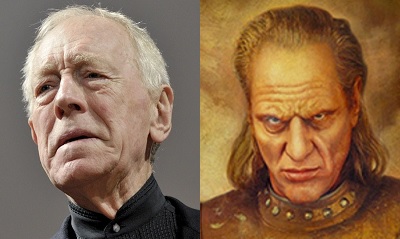 It is with great sadness that we report the passing of veteran actor Max von Sydow, who supplied the booming, sinister voice of Vigo the Carpathian in 1989's Ghostbusters II, and reprised the role in 2008's Ghostbusters: The Video Game in cameo as the portrait-bound despot.

Von Sydow rose to prominence starring opposite Death in Ingmar Bergman's The Seventh Seal, and amassed a notable list of roles and films, including The Exorcist, Flash Gordon, Dune, Needful Things, Minority Report, Star Wars: The Force Awakens, and Game of Thrones.

by RichardLess
Crazy to think that most people aren’t even aware he’s the voice of Vigo. He didn’t take a credit & i don’t think I’ve heard Ivan Reitman mention how he MVS became the choice for the voice.

I don’t have the link on hand but there’s a fella named William Forsche who has a treasure trove of GB2 behind the scenes material from his time at ILM & there’s a video of the original actor speaking the Vigo lines and...wow. Thank god a change was made. Max Von Sydow really turned Vigo into a formidable villain with an amazing screen presence using only his voice. Vigo is authoritative, scary, evil, regal and...butch. And most of that comes from Max’s commanding voice.

I mean...just think about how little screen time Vigo has. And most of his lines are repeated, much to Janosz’s chagrin. Yet Vigo looms large over the entire film despite his lack of screen time.

Ghostbusters 1 is obviously the better film. No doubts there. But I’ve always found Vigo to be a better villain. As a kid? My god Vigo terrified me. When his face warps & contorts after he’s “back in the painting!” and he makes those creepy animalistic sounds?? Yikes... Now it’s true the climax of the film is rushed and Vigo doesn’t really live up to his potential as a foil for our GB heroes, but what we get works. And most of that is all thanks to Max Von Sydow.

“Death is but a door, time is but a window, I’ll be back”- Vigo The Carpathian.

by Peter Venkman Jr.
This is really sad news. I always enjoyed seeing Max Von Sydow in the movies from Conan The Barbarian, to Never Say Never Again, to hearing him as the voice of Vigo in Ghostbusters II. He always had a great presence in every role he was in. I especially enjoyed seeing him as the defense lawyer in the movie adaptation of Snow Falling On Cedars.

Even 30 years later, Vigo's voice still scares my pants off. I am really glad that he came back to voice Vigo in Ghostbusters: The Video Game. I had a ball interacting with the Vigo painting at the firehouse in between levels. May he rest in peace.

by mrmichaelt
Sad to hear. Rest in peace, good sir. I still love and rewatch a lot of the movies he performed in. The first movie I saw that he worked on as the Exorcist.
All times are UTC-06:00
Page 1 of 1
Powered by phpBB® Forum Software © phpBB Group
https://www.phpbb.com/