Has Anyone Ever Made Any Original Gear?

My question is, has anyone built any original equipment, from their own designs? The reason I ask is that I'm in the process of building my own pack (http://www.gbfans.com/community/viewtop ... =2&t=11384), and since my wife now wants to be a Ghostbuster this Halloween as well to accompany me, she'll need something. I refuse to make another pack, and since I don't want to build anything unless it's somewhat movie accurate (call me nutty), I thought maybe I'd design some original gear. Like something we might see in the third movie, etc.

Has anyone gone this route before?

And although I know this opinion won't be as popular, I'll admit I was never a fan of the cartoon, so any gear from RGB is out as an option.

I've always liked this concept art... I consider it a mild inspiration for original gear... 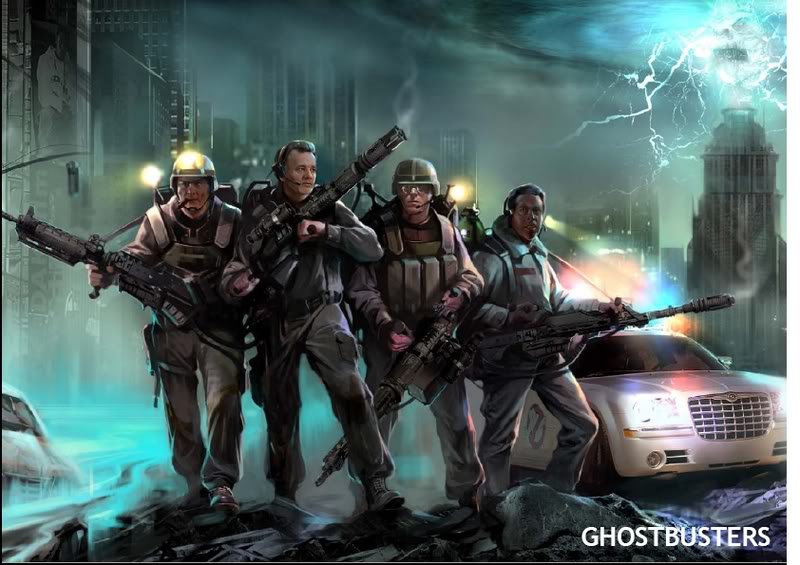 Ronnie (Slimer 7) built this pack which now belongs to (and is worn in the pic by) my friend Mitchell. The pack itself is custom and it's got 2 guns which attach old west style at the hips.

There've been a few people on here to make "ghost grenades" using pvc.

By SedgewickHotel -  April 27th, 2009, 2:14 pm
-  April 27th, 2009, 2:14 pm#114199
Wow, that dual pistol idea is great.. just the kind of thing I was hoping for. I was doing some searching today and remembered back to the early 90's when "Super Soakers" were all the rage. I used to have one that was huge and had a shoulder strap. I was thinking I could paint it black, and then paint the water tank yellow and fix it up with some radioactive stickers. I could also add a light kit, decorative resistors and of course a clippard valve.

I could even replace the nozzle with a giant acrylic tube to mimic the original partial thrower.

One is a throwback to the original RGB figures with the arm mounted cannons, but different from the neutrino pack from Return of the Ghostbusters. The proton pack is the same as the movie, the "gun" is strapped to the user's right arm and is much larger than a standard thrower and has two retracting barrels. Power on the pack, release the safety, the barrels slide forward and are ready for use.

The second idea is just a fun, completely insane, action figure-y premise. Custom pack design with no thrower in the conventional sense. The user holds in his hand what looks like a buzzer from Jeopardy! (a stick with a button on top). press the button and two proton gun swing out from the proton pack and over the user's shoulders.... best way to get a tan in 2.5 seconds.

Last idea (which will be done soon) is in honor of the game... a wireless trap. I was thinking... how do the traps open if there are no stomp pedals? Then it hit me... a VERY limited range PKE detector. I figure the range would be in a limited cone area directly above the trap. What I'll be doing is taking a standard trap and replacing the quick connect with a small nub with 3 yellow rings... I think it'll look great if I can pull it off the way I want to. something like this ||||[ ]||[ ]||[ ]|

wudden wrote: I was thinking I could paint it black, and then paint the water tank yellow and fix it up with some radioactive stickers. I could also add a light kit, decorative resistors and of course a clippard valve

More often than not, Super Soakers, and Nerf Guns end up as steampunk items. I have seen a few examples of them as GB gear though and loved them all, So I say DO IT!!!!

Slimer7 wrote:You should see the shit Guyver is working on, amazing stuff!!!

I haven't seen his current stuff, but yeah Guyver's stuff is THE SHIT!!!! Next to yours I mean

zeta otaku wrote:I have some designs on paper only that I want to rig up at some point.

ALL of these sound awesome to me, as you can tell I'm a fan of the custom stuff, and can't wait to see more!

Speaking of which, though I don't have any real up close detail shots, here are a couple of Jon Currey with my Proton Pistol. Its a Nintendo Zapper, with the tip replaced with the end from an oil funnel. There is braided mini rainbowcable on the barrel (which is now flat black) The cord is the original with a wire wrap wround it. It's attached to an Army LVE belt/suspender with a holster for the gun. On the back the cord connects to a Steel canister Diesel Oil Filter, with a bicycle safety light attached. The light has red LEDs in it that mimich the cyclotron pattern.

The fan-fic idea behind the gun was that it would emit a small but powerful proton burst to "stun" a fast moving ghost. That way the ghost could be trapped while doing minimal damage to the client's home.

I've also put together a GBVG inspired tank to add to the 2 gun pack. It's made out of two NOS Energy drink bottles. 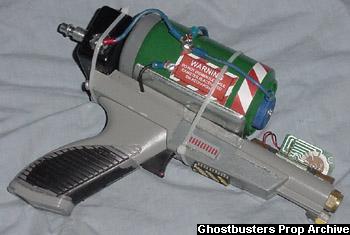 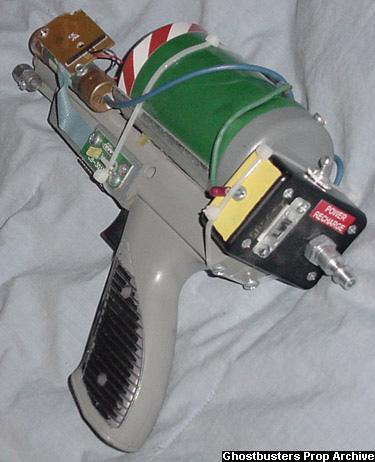 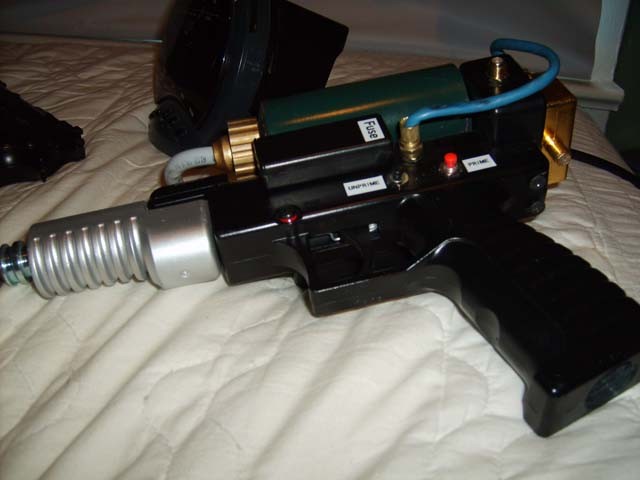 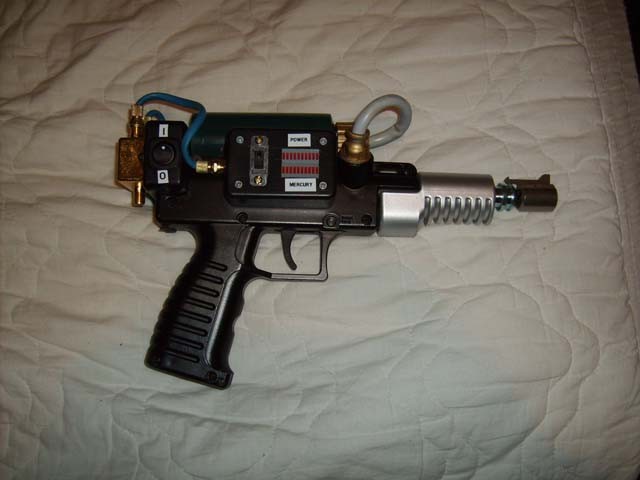 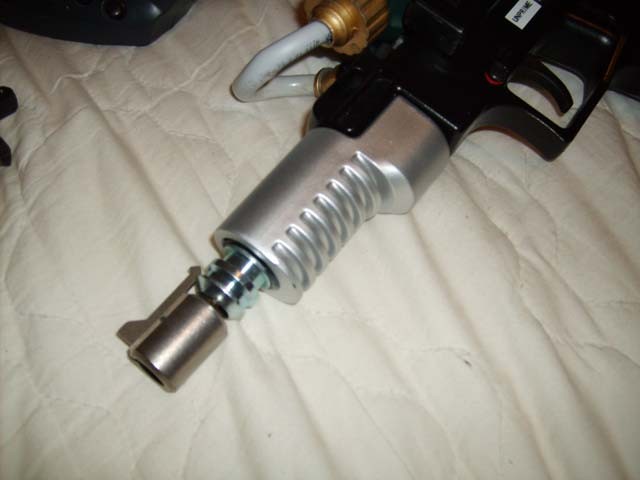 It's just like making love. You know, left, down, rotate 62 degrees, engage rotor.

phantom50 wrote:Being original here is strictly forbidden. I've notified the Admins about you.

Hello, Brock has summoned me here to take care of you looters and polluters. Prepare to meet your death.

One of my "custom packs" 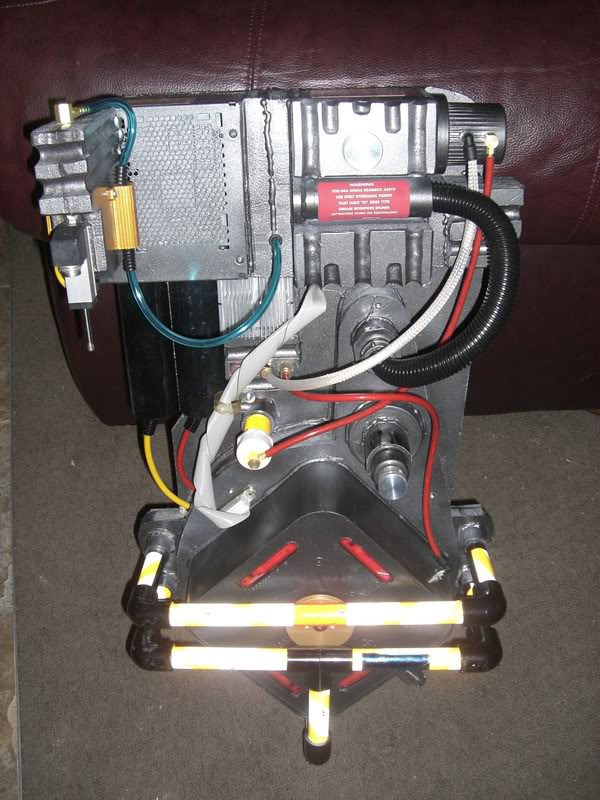 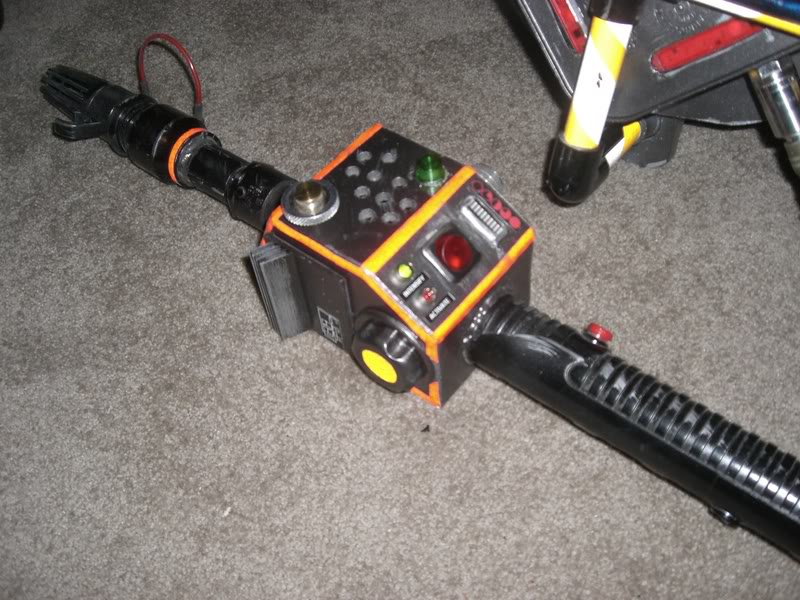 and one "in the works" 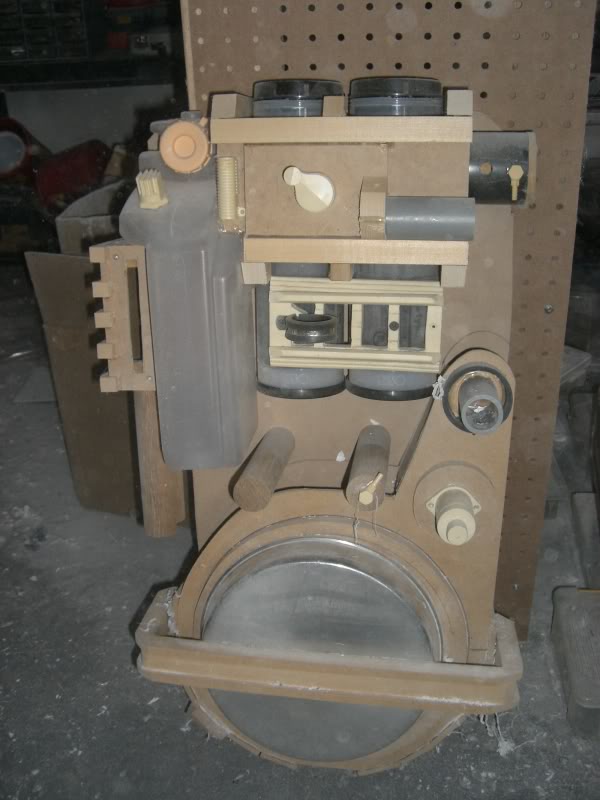 DARE to be different
Work:Multimediamayhem's Web Store
Facebook:MMM on Facebook

By bradboss12 -  May 2nd, 2009, 5:23 pm
-  May 2nd, 2009, 5:23 pm#115774
just about everything I build is original. Maybe not GOOD, but original : ) I have made Mood Slime grenades (makes people happy for a while--excellent crowd control). We have the Burgh Pack Mark II's in our WIP fan film, and I have made a few other gadgets (I've probably forgotten to post pics since I've been busy working on stuff for the movie!! ) Good luck and keep us posted!
GBSI movies
http://www.youtube.com/scgbgbsi

Why yes it is, so I guess thats one way to see it...lol. My camera appears to be missing it cord at the moment, but I'll try and get some picks up. Would also like to mention that I've always LOVED the Nintindo blaster proton pisol for some reason. It inspired me to make my own, completley different, but certainly inspired, that also appears in Hellbent.

By EctoDeath -  May 26th, 2009, 7:46 pm
-  May 26th, 2009, 7:46 pm#122341
To avoid the over-used "trap grenade", I'm gonna be using a bunch of project boxes to make a belt of "mini traps". They'll roll on a flat surface and I'll probably wire a blinky light on each one, but it'll basically be just like the name suggests. Just smaller traps made from project boxes and whatever other things at RadioShack I feel like tossing on there.
DFW Ghostbusters

By Dan Shannon -  June 2nd, 2009, 12:19 am
-  June 2nd, 2009, 12:19 am#124439
For the last month, I actually got inspired to build another prop based on this funny idea I had in my head for almost 3 months. It's called an Ecto-Vitalizer Pack, a pack that can reactivate the PKE in inert ectoplasm. The inert ectoplasm being used on this pack have the ability to freeze and heat objects to the point of absolute zero or ignition, respectfully. 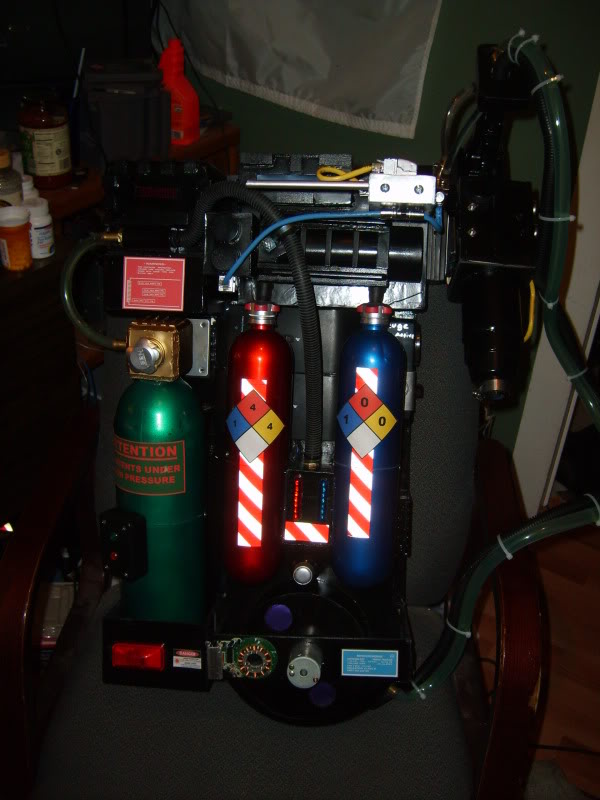 Using Central Georgia Ghostbusters' idea (who I give full credit for) for using NOS energy drink bottles. I also incorporated the use of the Slime Blower/Tether from the video game. The thrower was made from an old non-functioning drill, cardboard from a coke box, a 1 1/2 PVC coupling and a measuring cup from a Sun Laundry detergent bottle.

Because it's getting late, here's the link: http://www.gbfans.com/fans/props/other/2199/

Dan Shannon wrote: Using Central Georgia Ghostbusters' idea (who I give full credit for) for using NOS energy drink bottles. I also incorporated the use of the Slime Blower/Tether from the video game. The thrower was made from an old non-functioning drill, cardboard from a coke box, a 1 1/2 PVC coupling and a measuring cup from a Sun Laundry detergent bottle.

Way to take a simple idea and improve on it man!

wudden wrote:Wow, that dual pistol idea is great.. just the kind of thing I was hoping for. I was doing some searching today and remembered back to the early 90's when "Super Soakers" were all the rage. I used to have one that was huge and had a shoulder strap. I was thinking I could paint it black, and then paint the water tank yellow and fix it up with some radioactive stickers. I could also add a light kit, decorative resistors and of course a clippard valve.

I could even replace the nozzle with a giant acrylic tube to mimic the original partial thrower.

found this exact super soaker in my garage today. looks like i'm going to be building something around this

Let me do a few sketches of things in the next couple of weeks, but in the meantime here are those ideas.
facebook.com/southsuburbsgb

I found an old handheld Dirt Devil vacuum cleaner at Goodwill the other day. It looks like a good base for KUD Meter MK-II.
facebook.com/southsuburbsgb

Right. Here is the Dirt Devil.

I've already stripped the motor out of it, leaving the power switch, LED, and some of the wiring, and cleaned the stickers and crayon off.

Now comes the big question: "Why didn't you go for the metal detector?" Answer--I SAW the metal detector about three-odd years ago at a flea market, but didn't think I'd ever get around to actually doing the KUD meter. But this is a considerably more interesting shape.

The first and most difficult step is in deciding what a KUD meter actually does. I've got it in my head that it scans for and measures dimensional instability. Folds in reality, how porous the dimensional walls are (i.e. how many/how big the entities are), where the leak is, the like.

What I would like to accomplish:
[*]A display of some kind, be it analogue or digital
[*]Sound
[*]To learn along the way how to do this stuff.
facebook.com/southsuburbsgb

Reply
Return to “Other Props”
23Apr

Hi, David! I wrote to you privately a few days ago[…]