I'm printing the non-springloaded version, though I'm not necessarily planning on adding my own electronics to it (for now). I'm building this mostly for looks rather than function.

Here's everything laid out. Sorry, I don't recall total print time, but it's not long. The midship and back frames are like 5-7 hours each. Front and back plates were like 4-5 hours. All the little stuff was fast. This is all done in PLA, except for the antenna with is TPU (just in case it ever snags on anything). 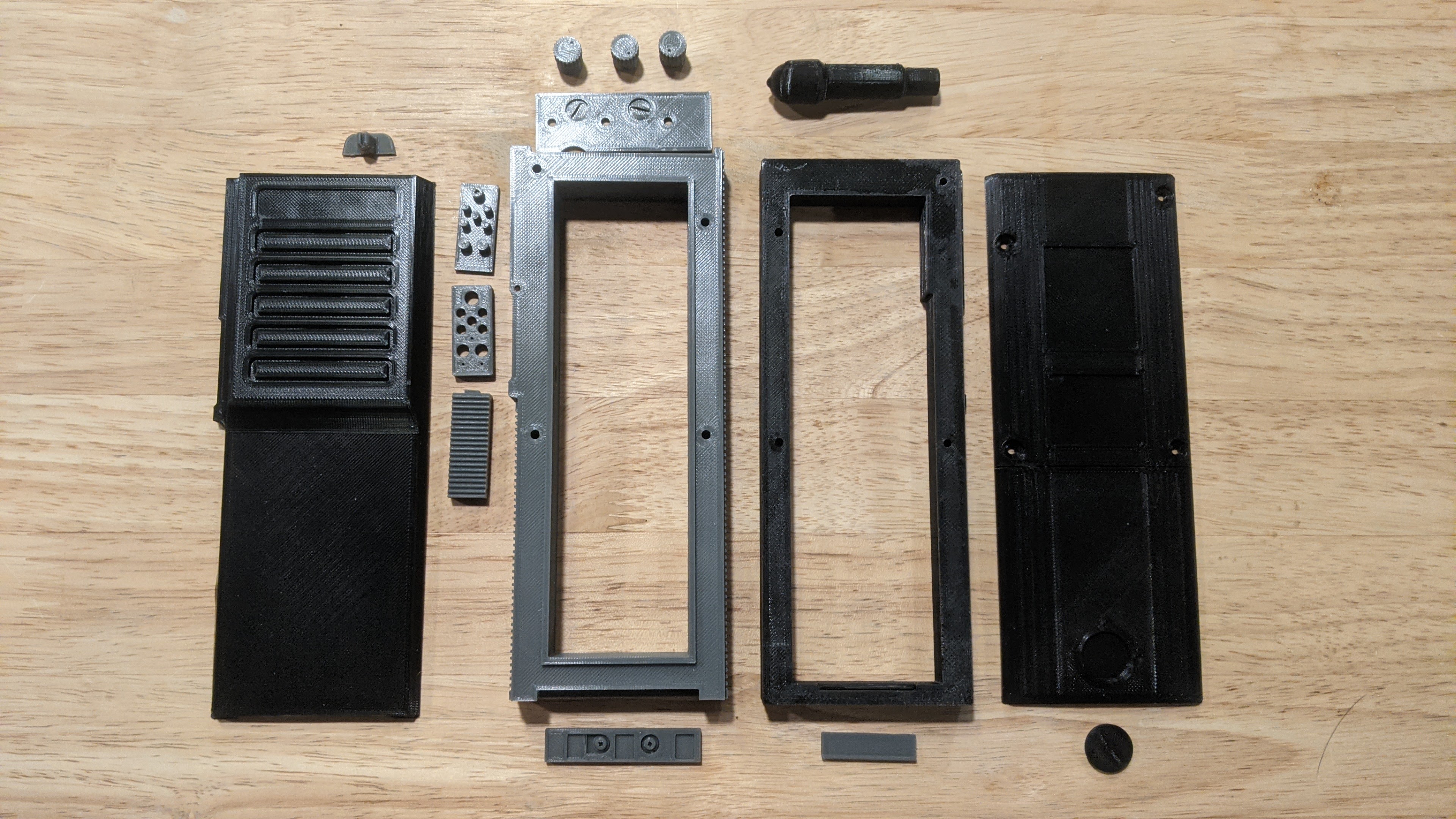 Some front detail. I printed the front plate at .12mm with a .4 nozzle. While it has some visible texture, it's not very dimensional, and should take filler easily. 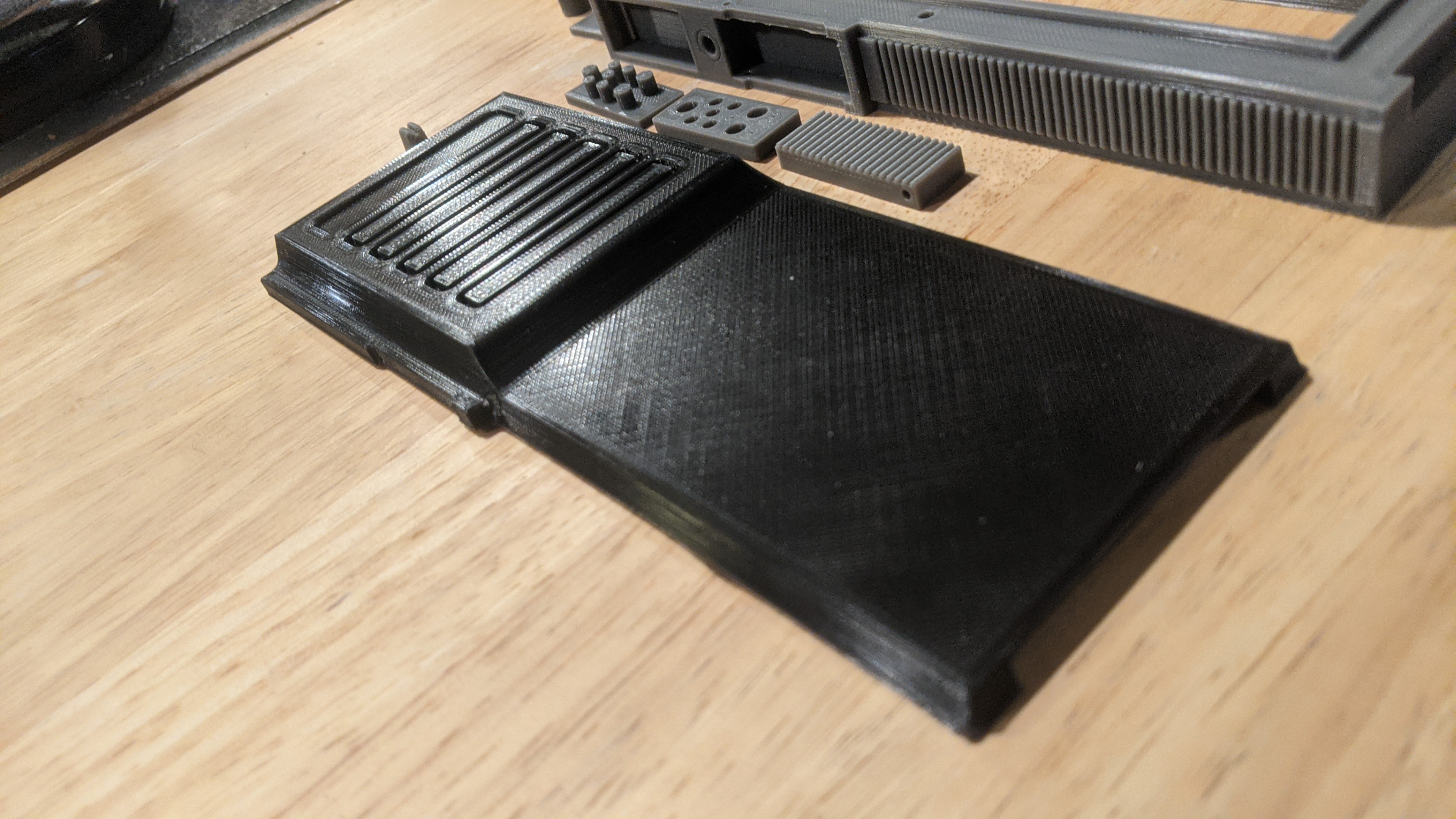 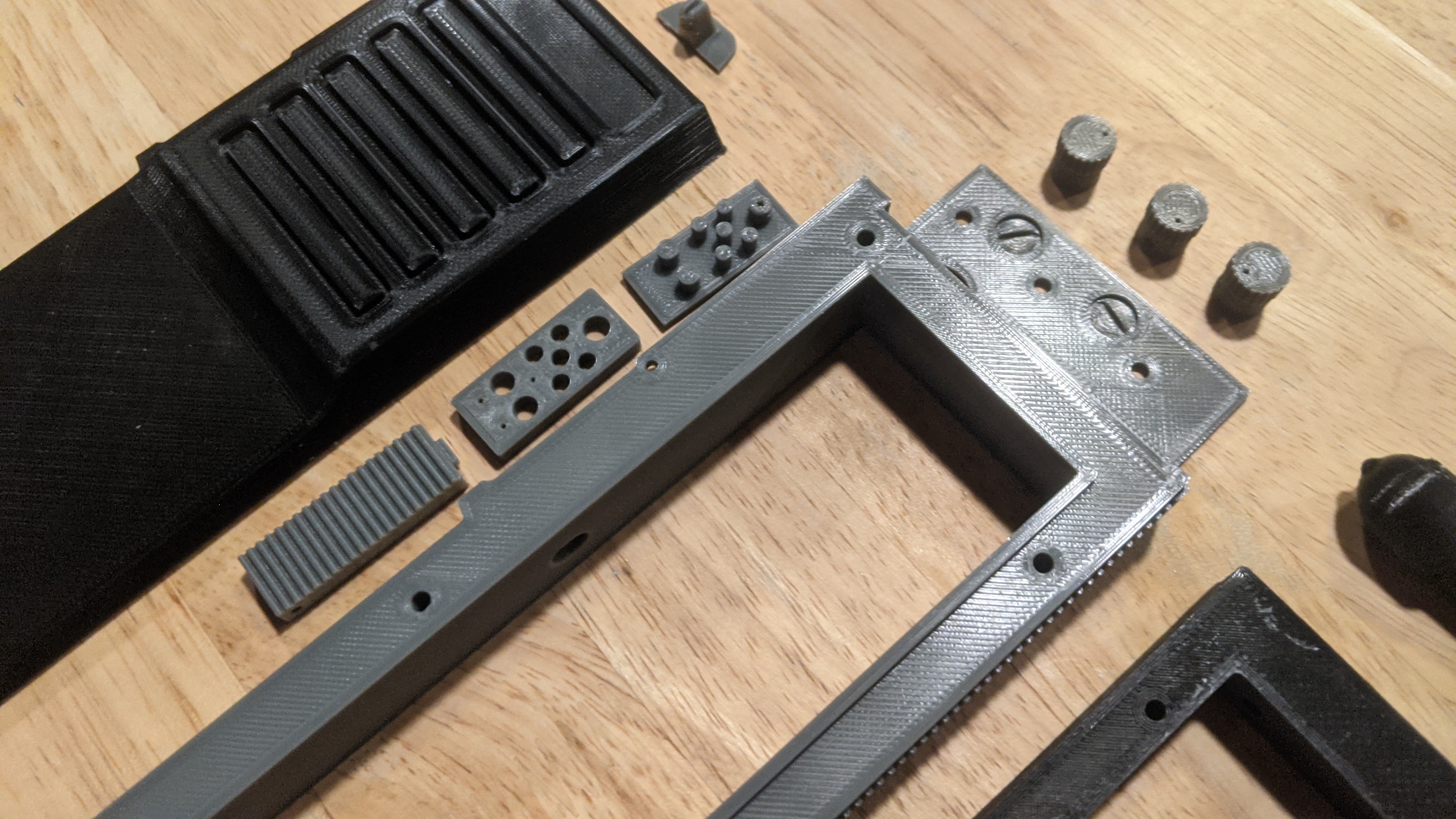 Here's what I'll be painting with. I wanted the plastic to have some of that mottled texture to it, so I'm gonna test out the hammered black (I might change this after I test it). Silver for the aluminum parts, and a filler primer for the big front and back pieces (the rest of the fine detail is enough that I don't think it'll benefit from thicker primer). But what's the liquid electrical tape for? Even though the antenna will be printed in TPU, it's going to have some print texture to it I can't fill and paint away. Instead, I'm gonna dip it the liquid electrical tape to give it that vinyl coating look. 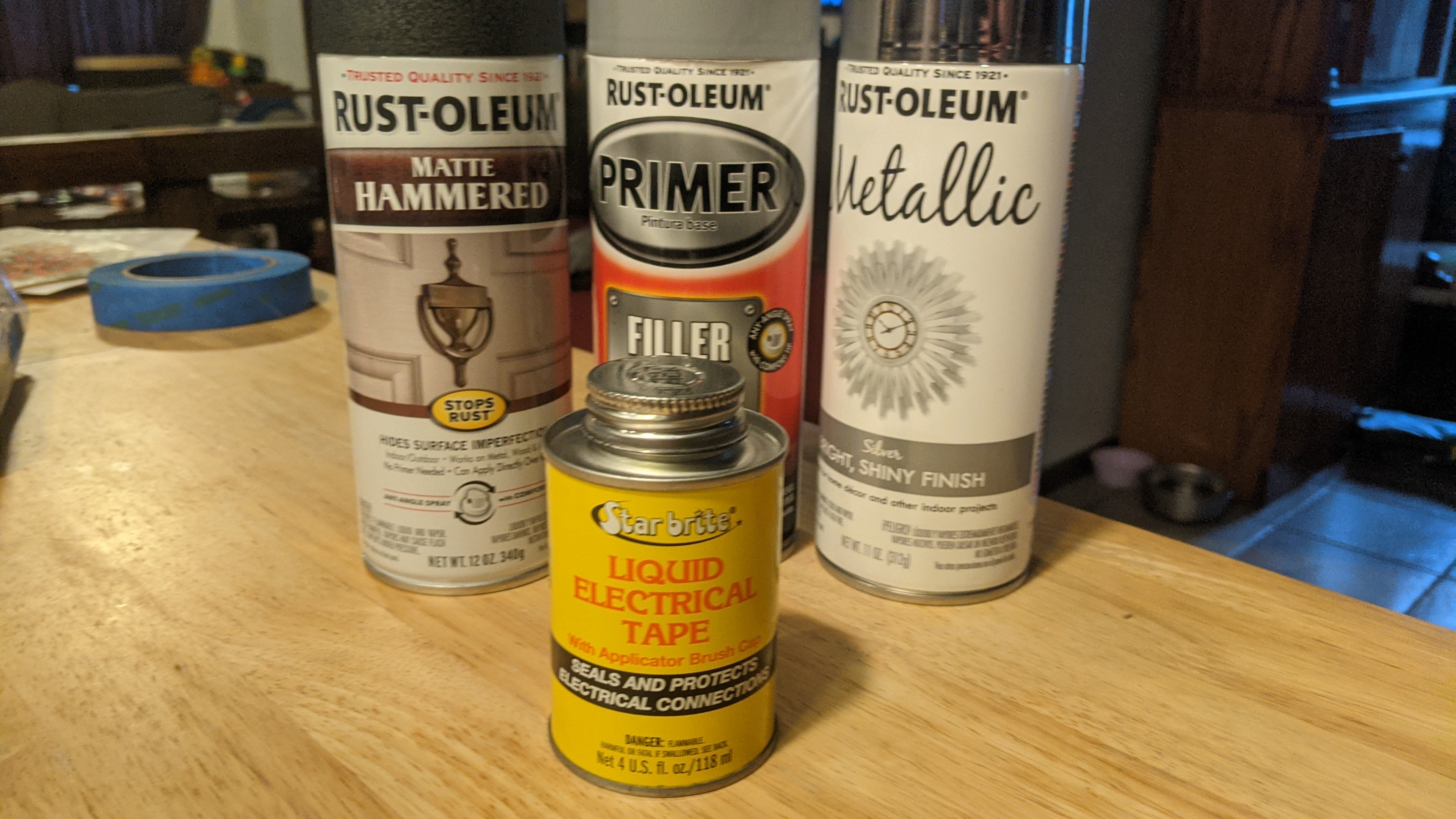 On the middle frame, there's a registration ridge that mates with the front plate, and it's a tight fit. Tight enough that I don't want any paint or primer building up the thickness, so I've masked this off for now. 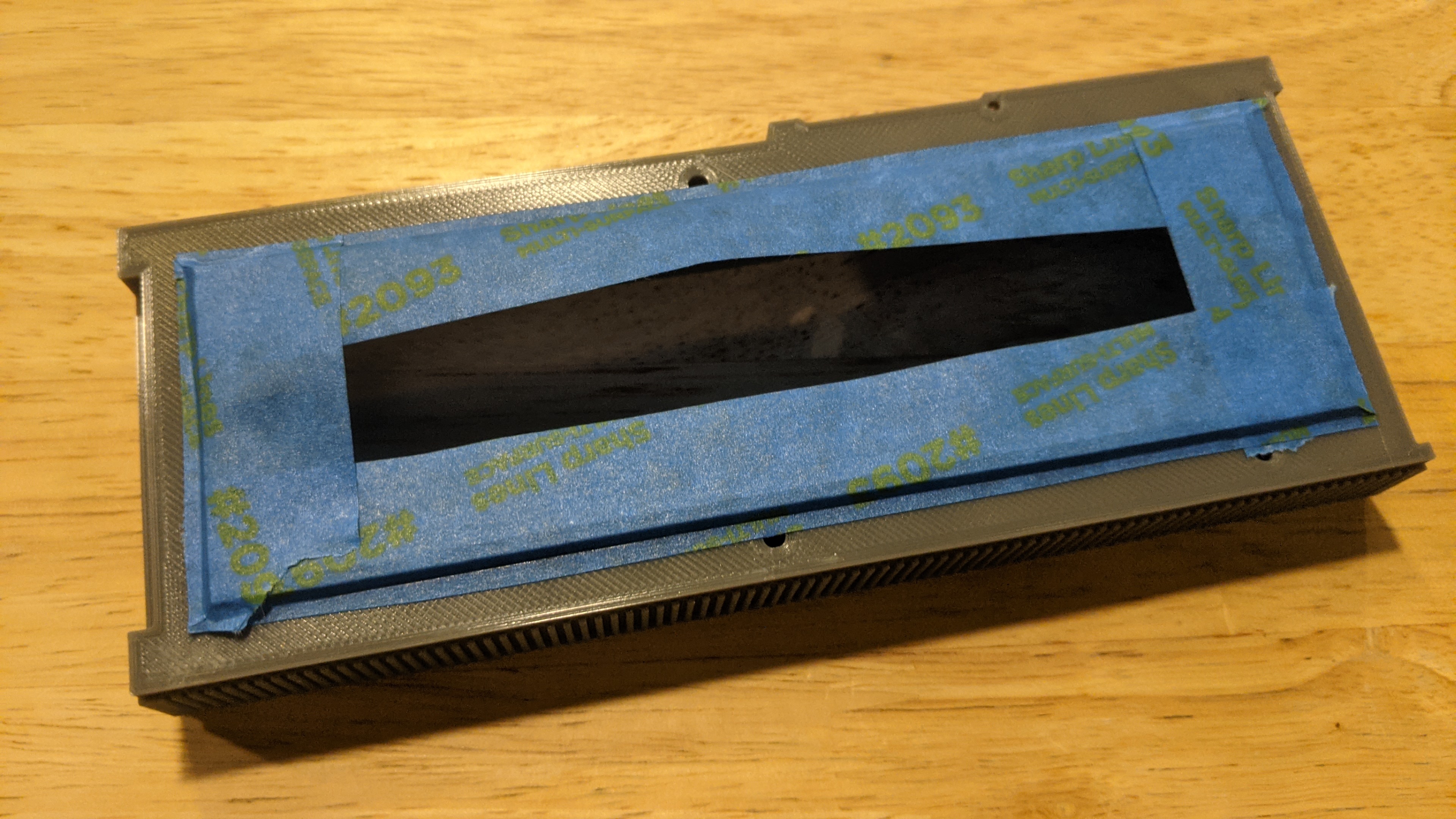 And first coat of primer on all the silver pieces to get started. I did use normal primer on all these, not the filler primer, for the reason noted above. One thing I haven't plotted out yet, though, is how I'm going to do the labeling on the top plate for the knobs. I have the graphics for the Motorola sticker that goes on front, but the top is going to be an interesting challenge. Suggestions welcome. 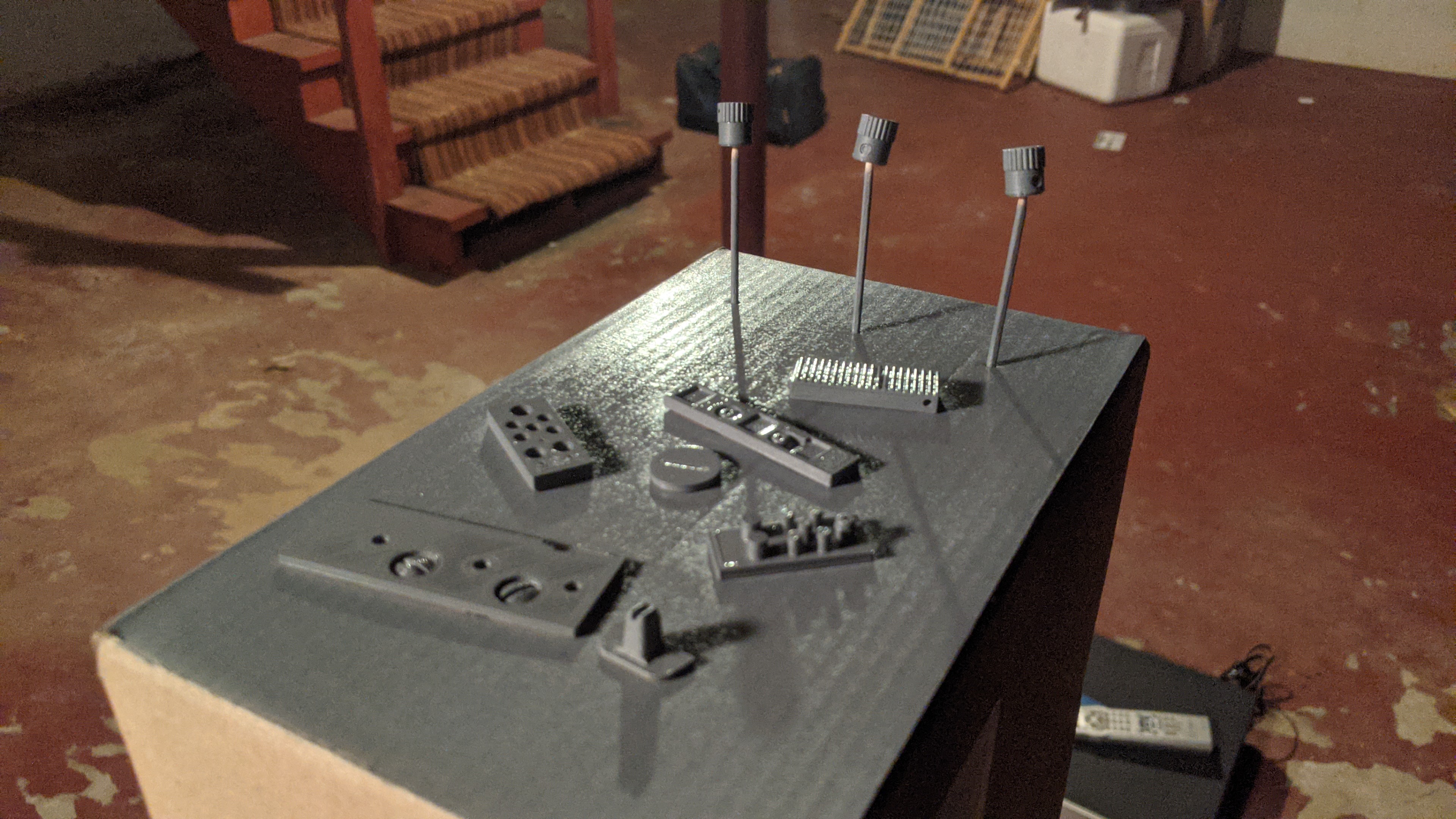 The middle frame is the biggest piece, but at .12, the vertical resolution is more than good enough that it won't benefit from the filling and sanding, really. 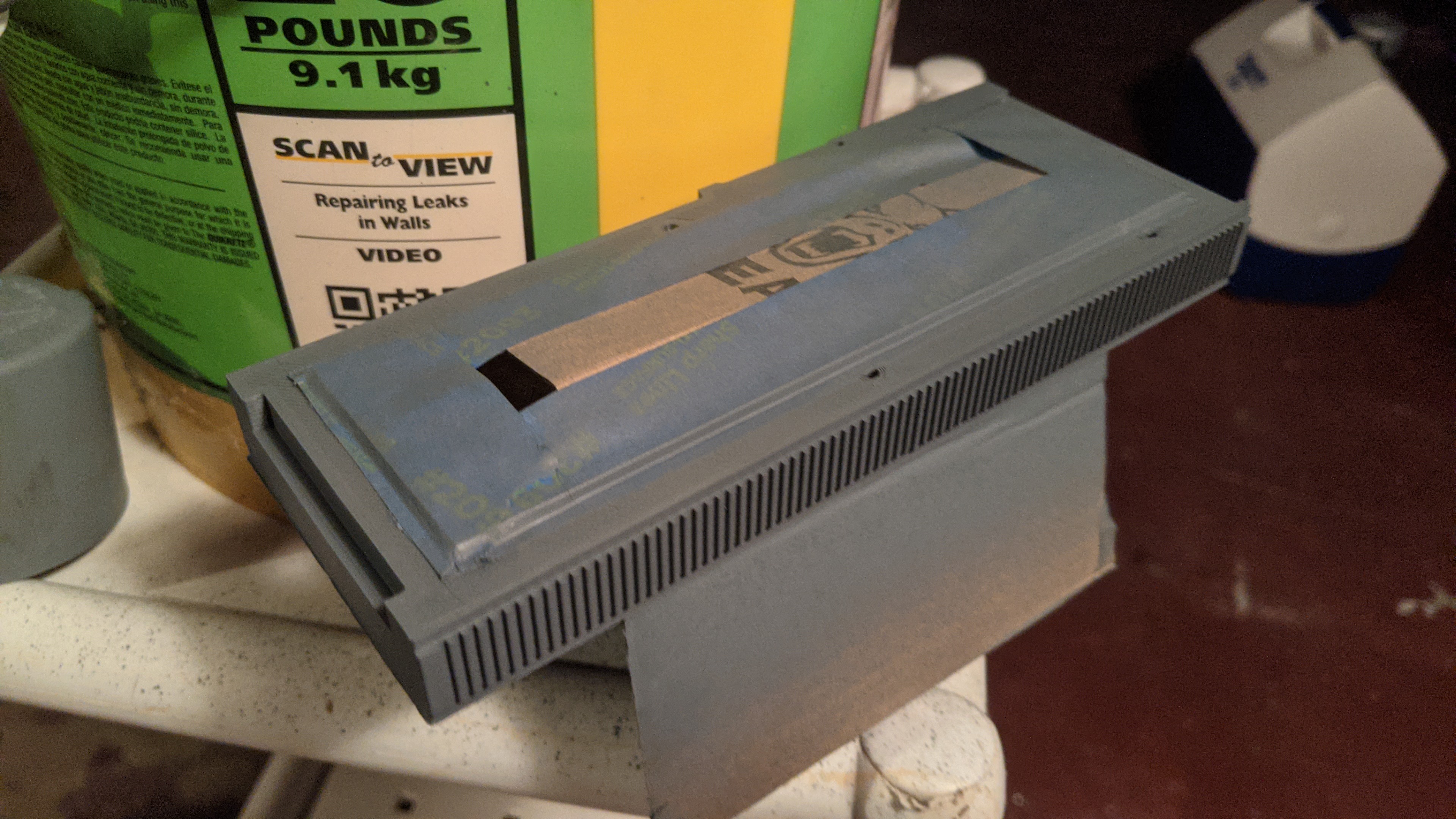 More to come as I make progress!
Nighty80 liked this 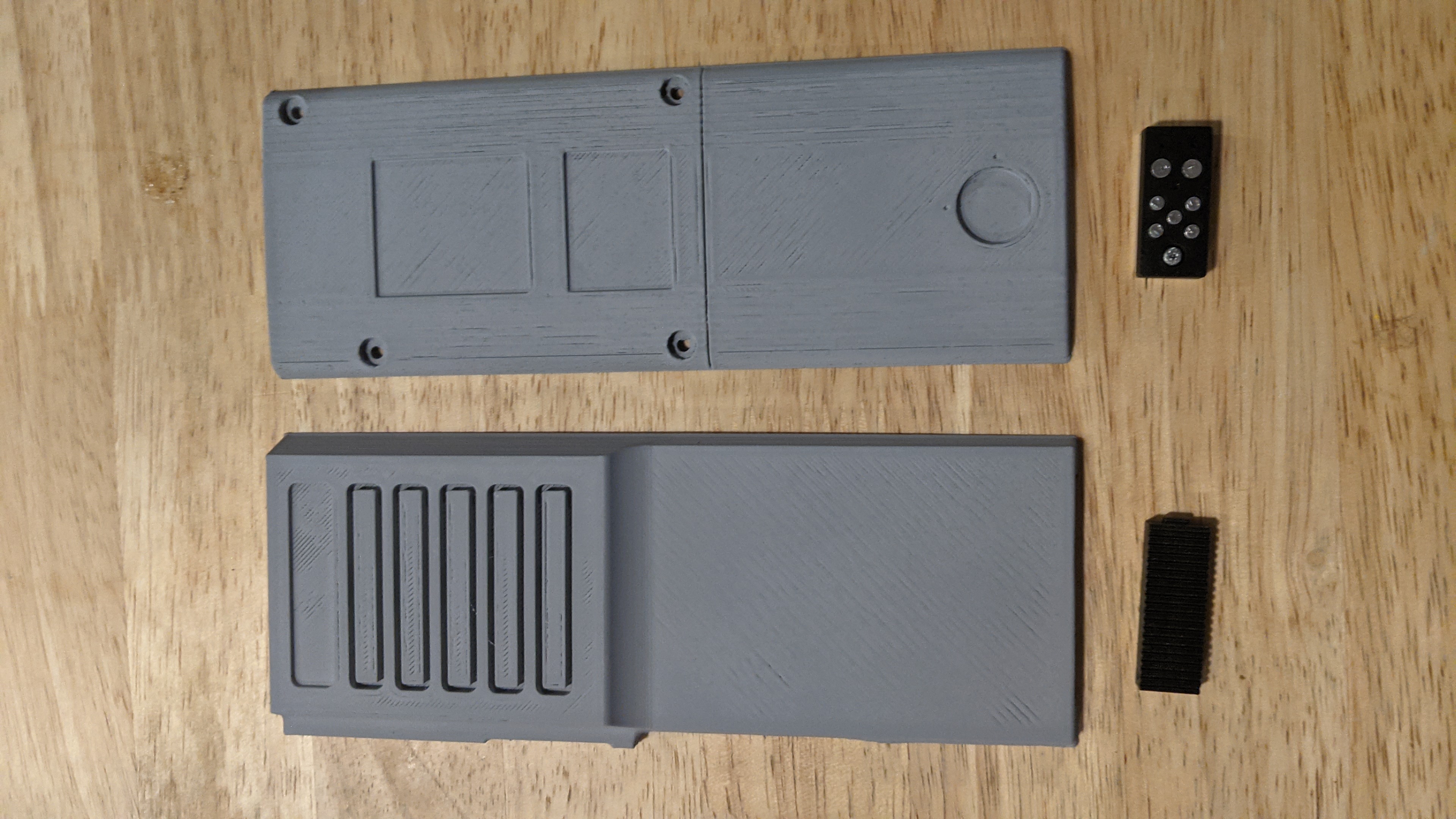 Honestly, really happy with the silver. Silver spray paint can always be hit or miss, but this gets that brushed aluminum look pretty close. Not too worried about the surface finish on these parts, but I might go ahead and do a better pass on that top plate with some filler. 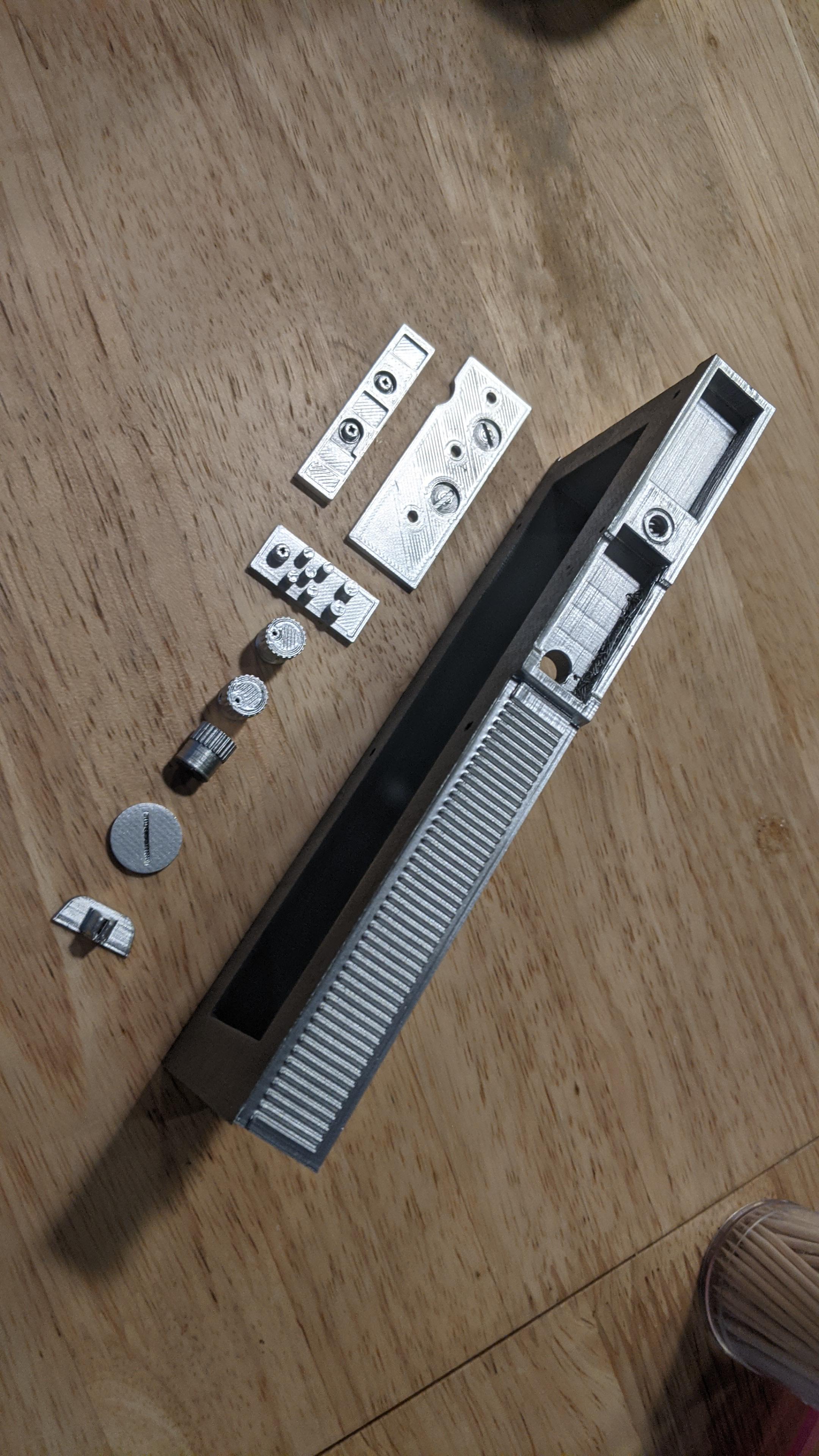 The back frame with the hammered black paint. Not sure I love it. It's definitely not the right texture for it from an accuracy standpoint. But it also might still work okay, I dunno. Maybe I'm better off just doing flat black. 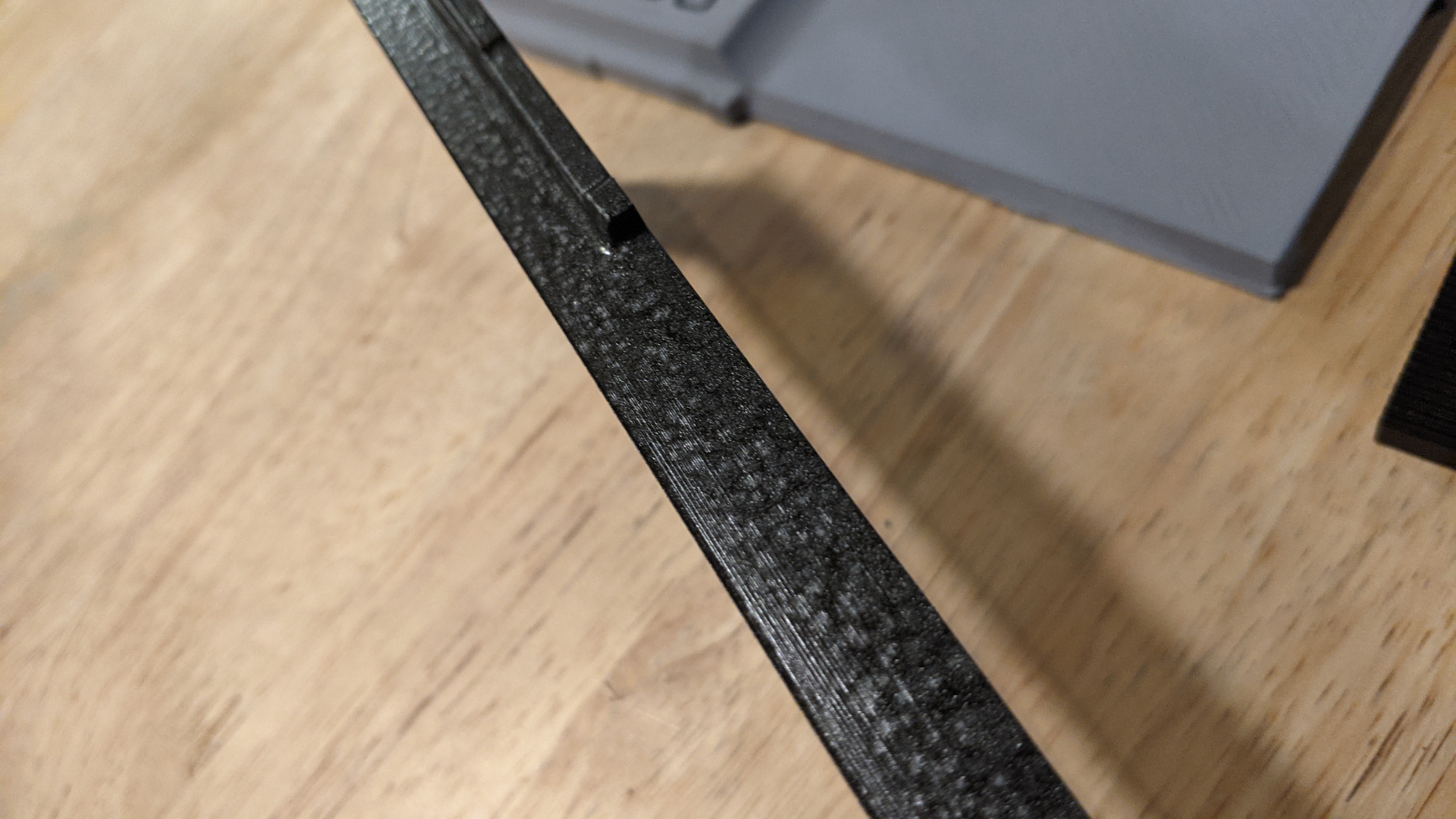 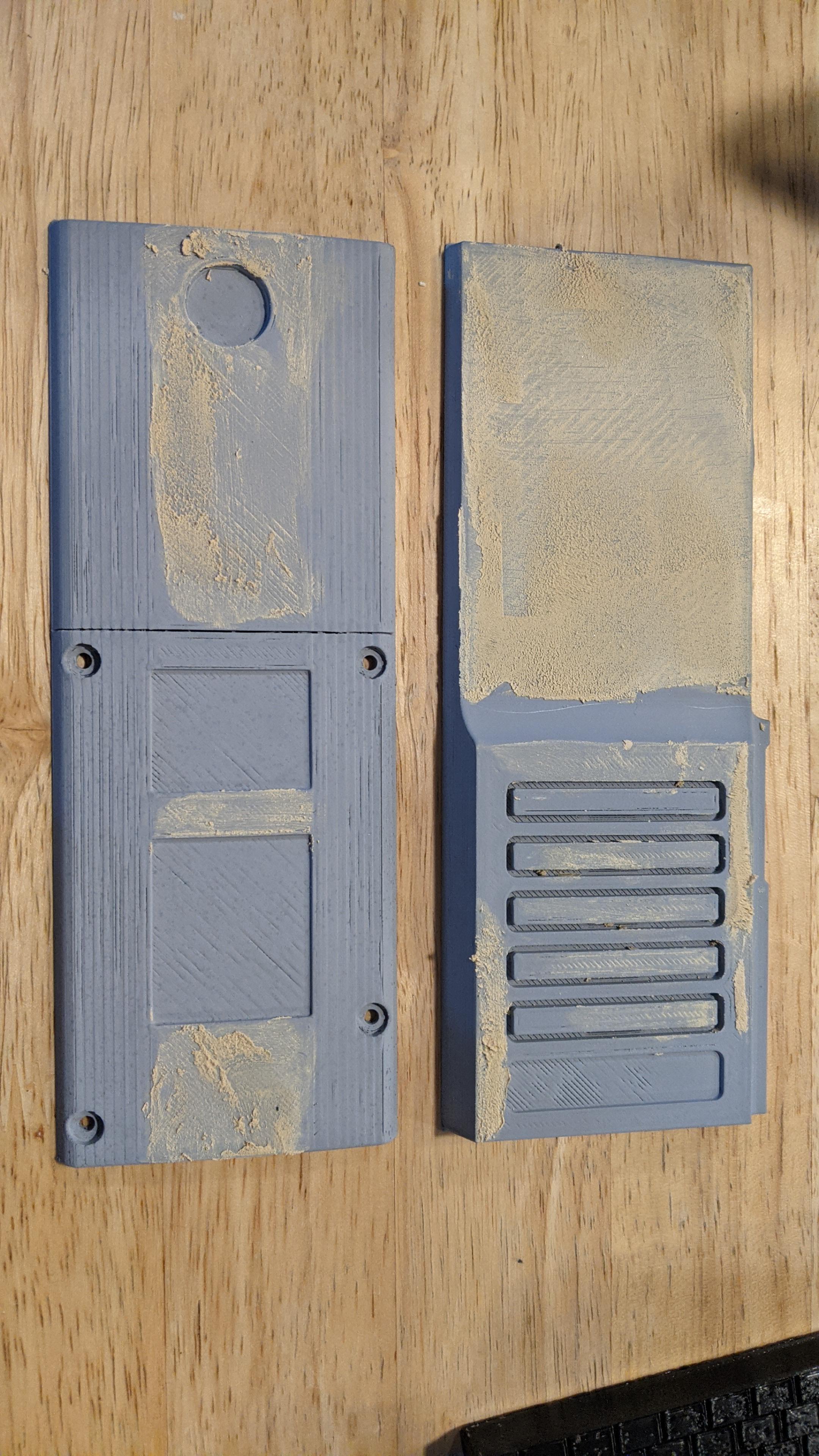 Assembling the top plate. Obviously you can see print texture here, but again, I didn't see a point in chasing perfection here. 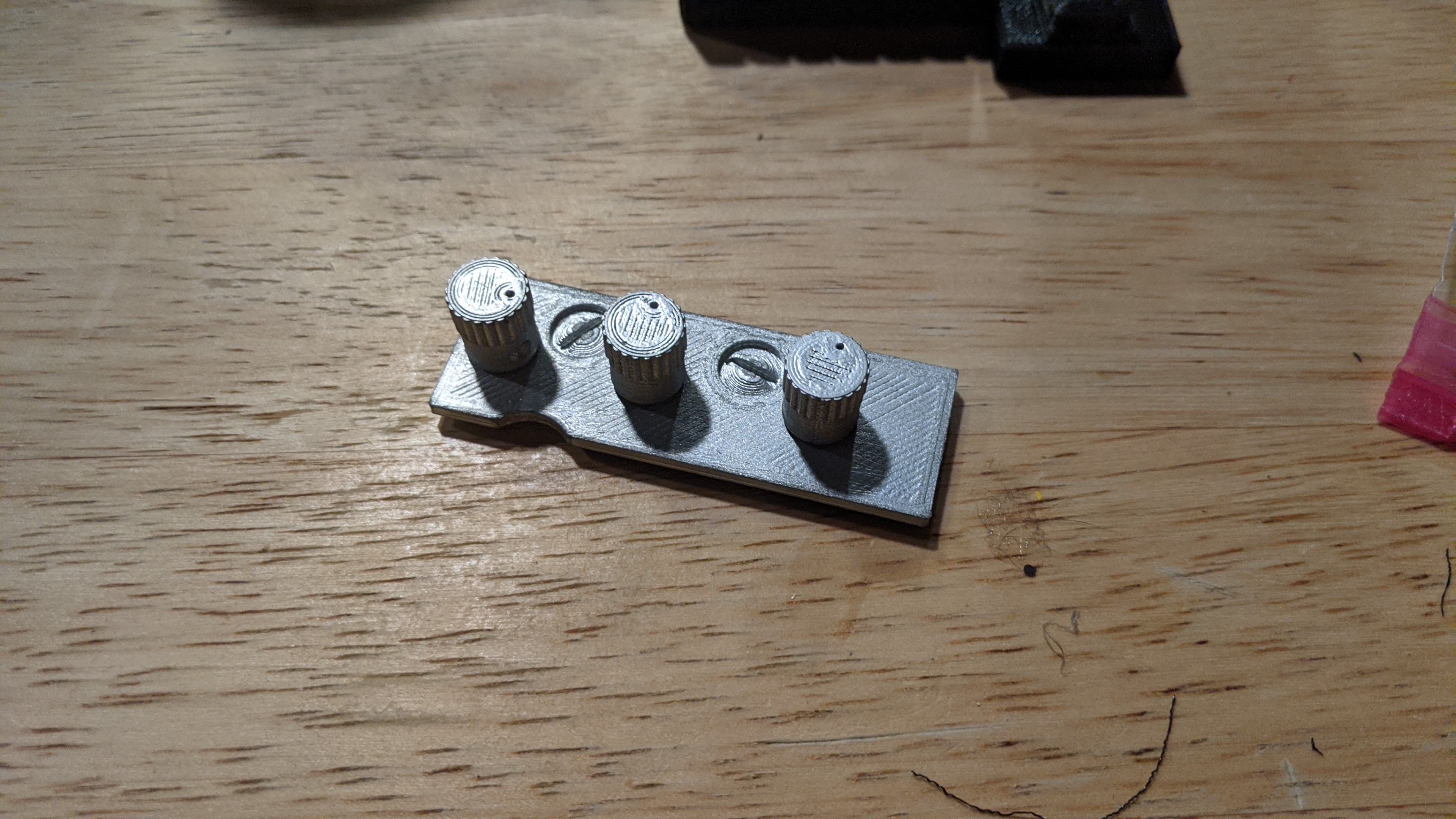 Test fitting the mid-body together. I have a coat of liquid electrical tape on the antenna, which I printed in TPU for flexibility. Gonna try dipping it for a second coat. Decided I will springload the switch, and you can see on the back frame I did change from the hammered paint to a textured one, and I'm really pleased with it. 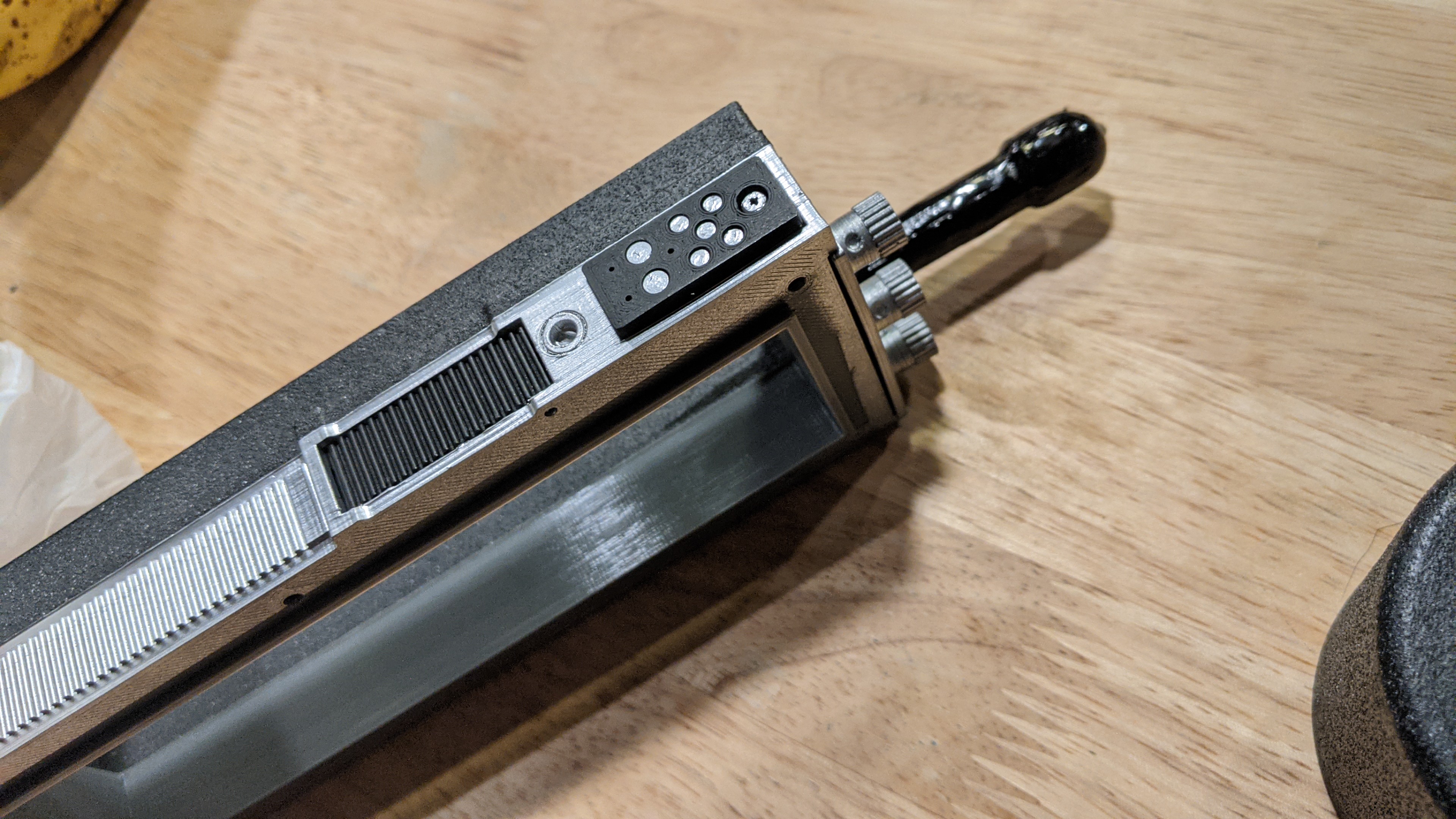 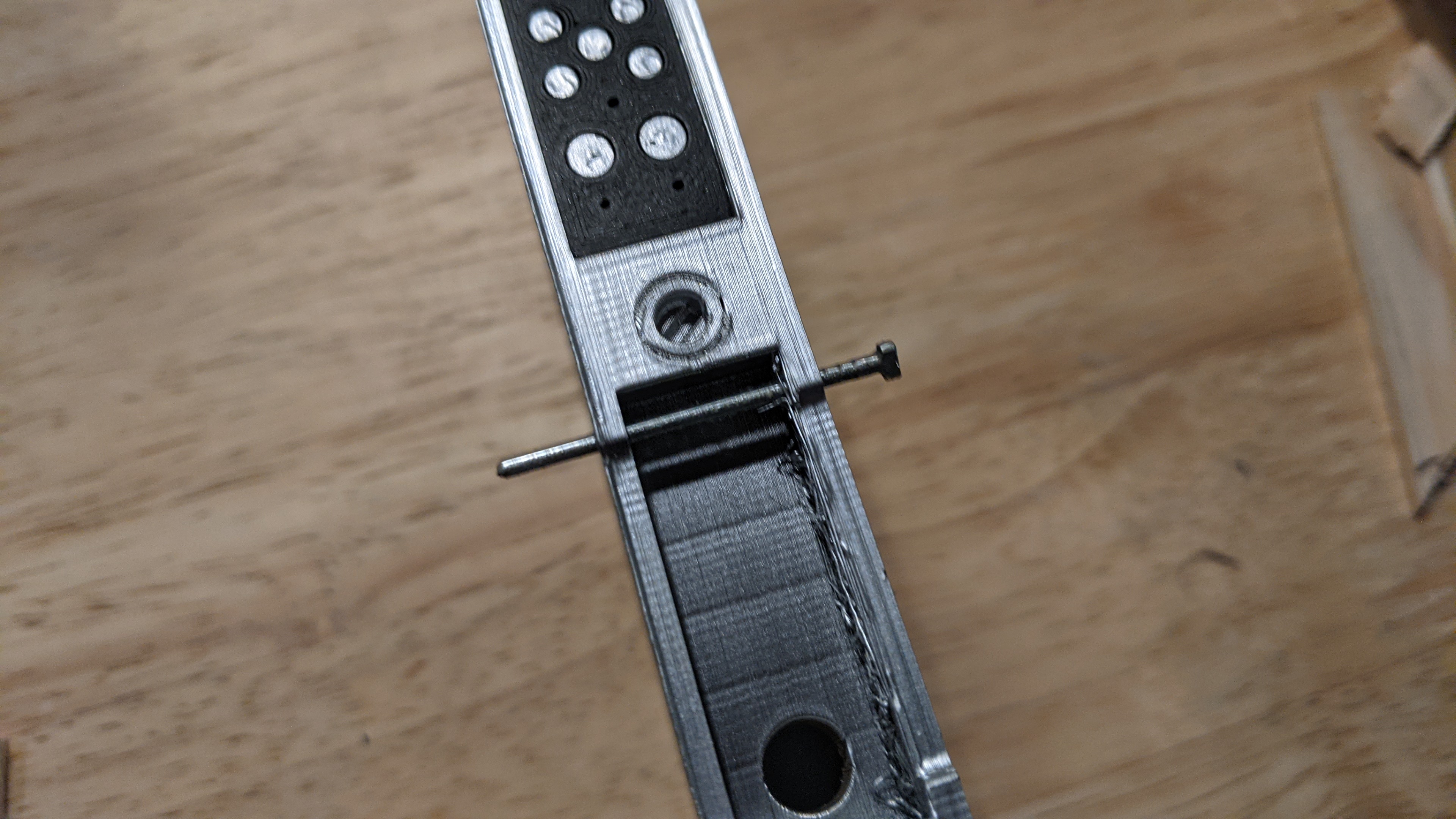 Turns out a 16ga air gun nail is the perfect diameter for the call button pivot. Slid right in, trimmed down, and the plates on either side hold it cleanly in place. 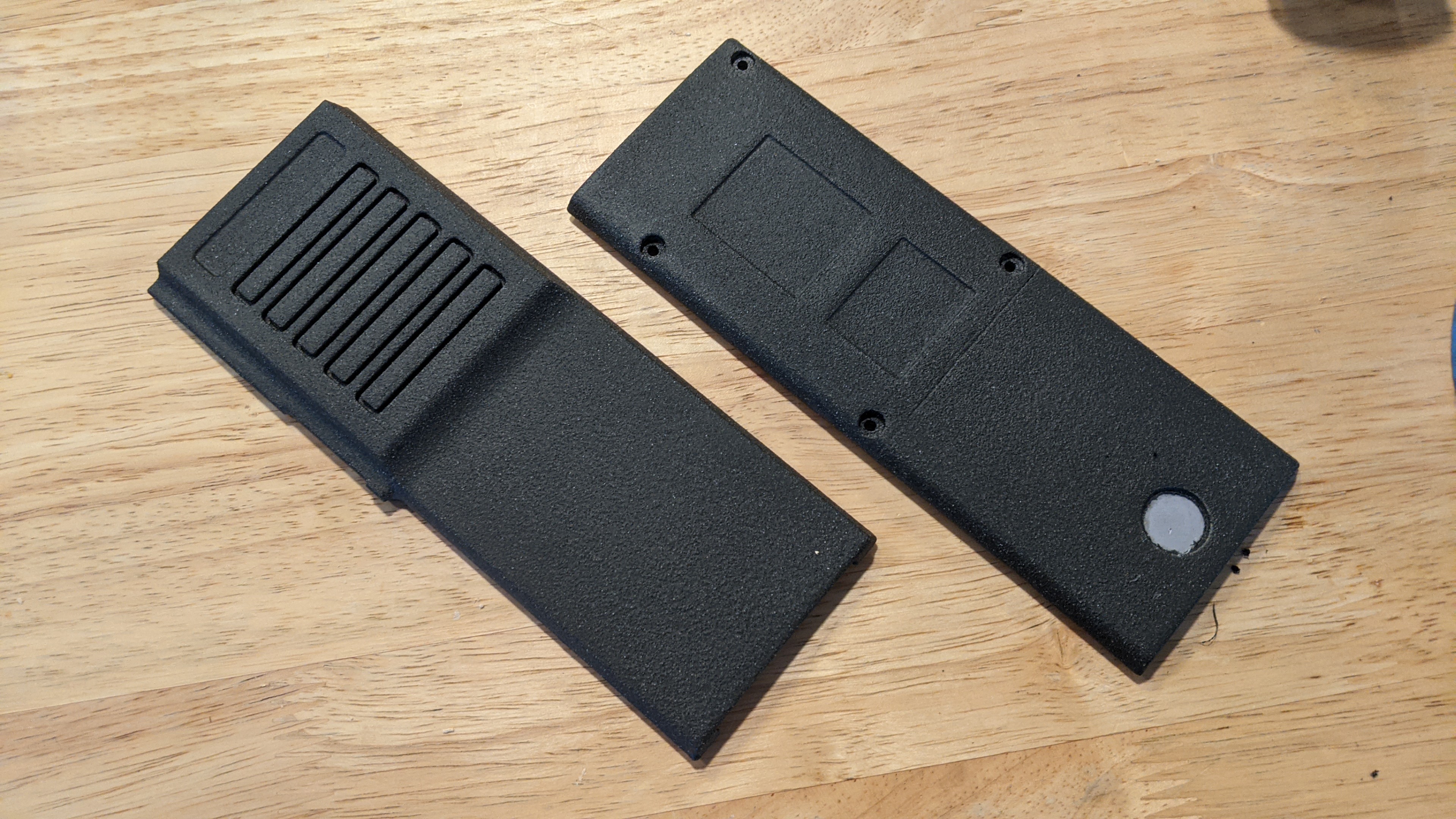 Front and back after a couple coats of the textured black. 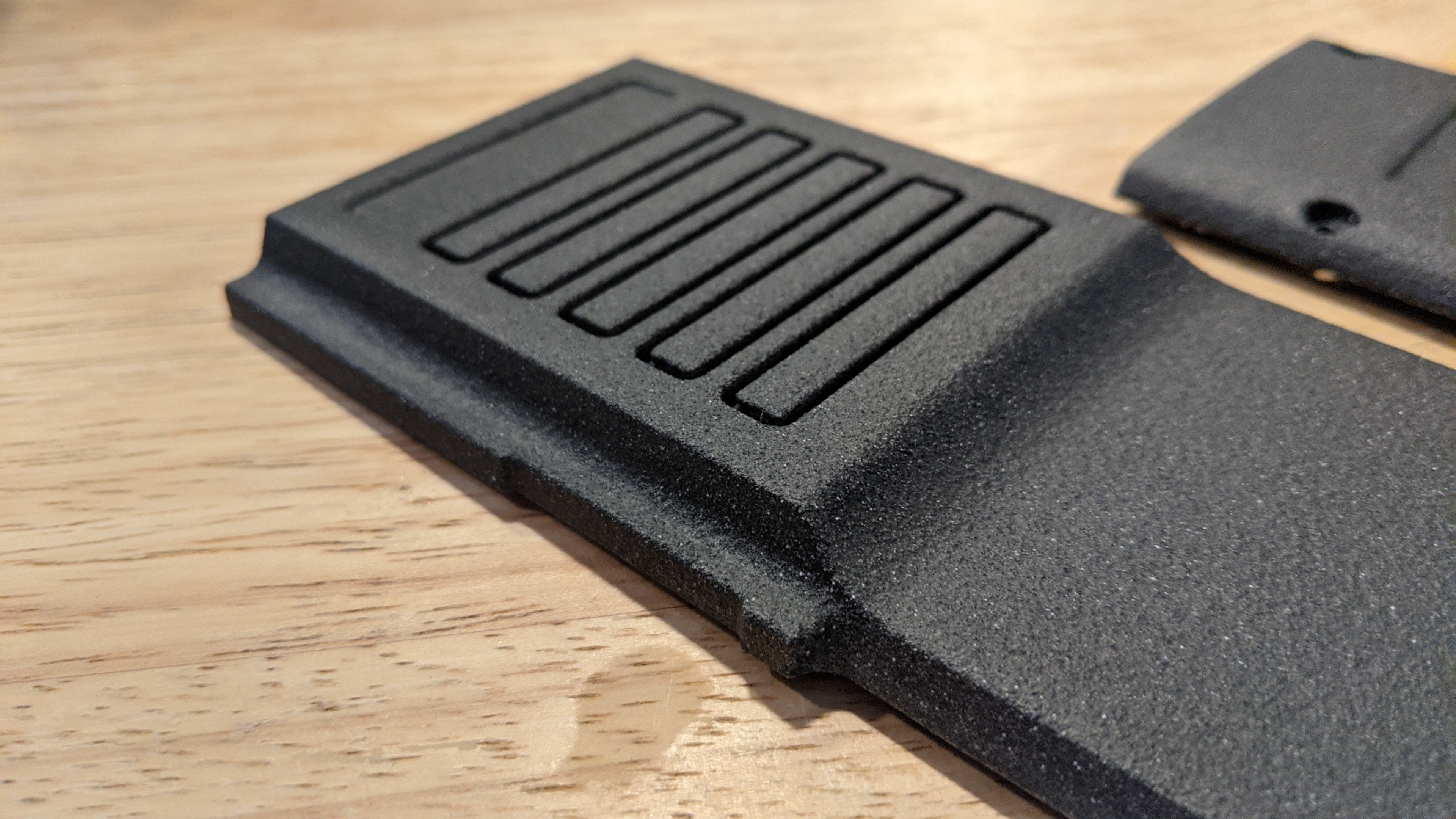 I mean, man, I'm not sure I could have asked for this to turn out better. I'm really glad I dropped the hammered black for this. It's certainly not perfectly accurate to the original plastic, but it still passes the glance test, and I think when it wears a little, it'll be even closer. 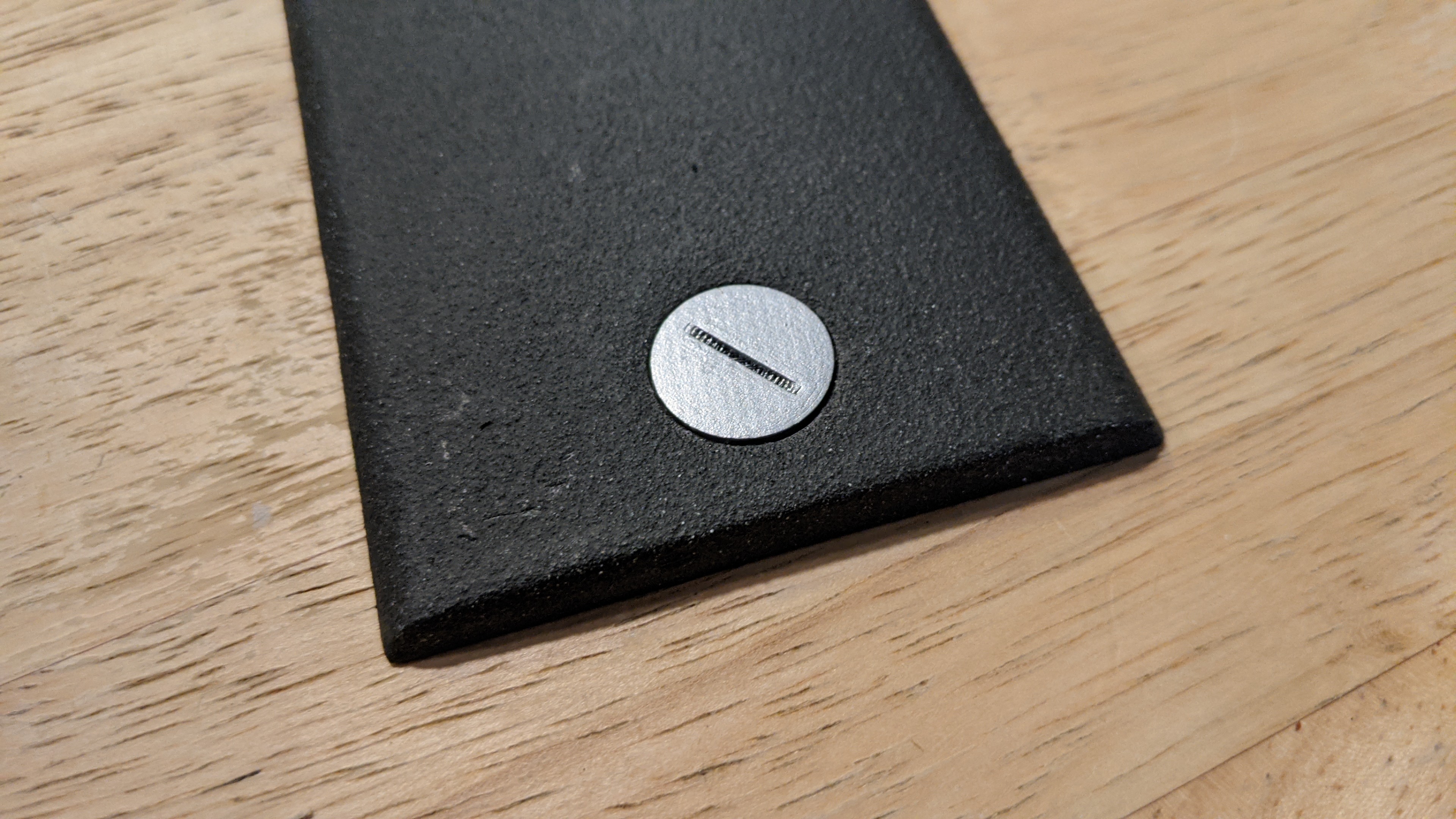 Fitted the batter cover screw, used the same silver as the mid-body. 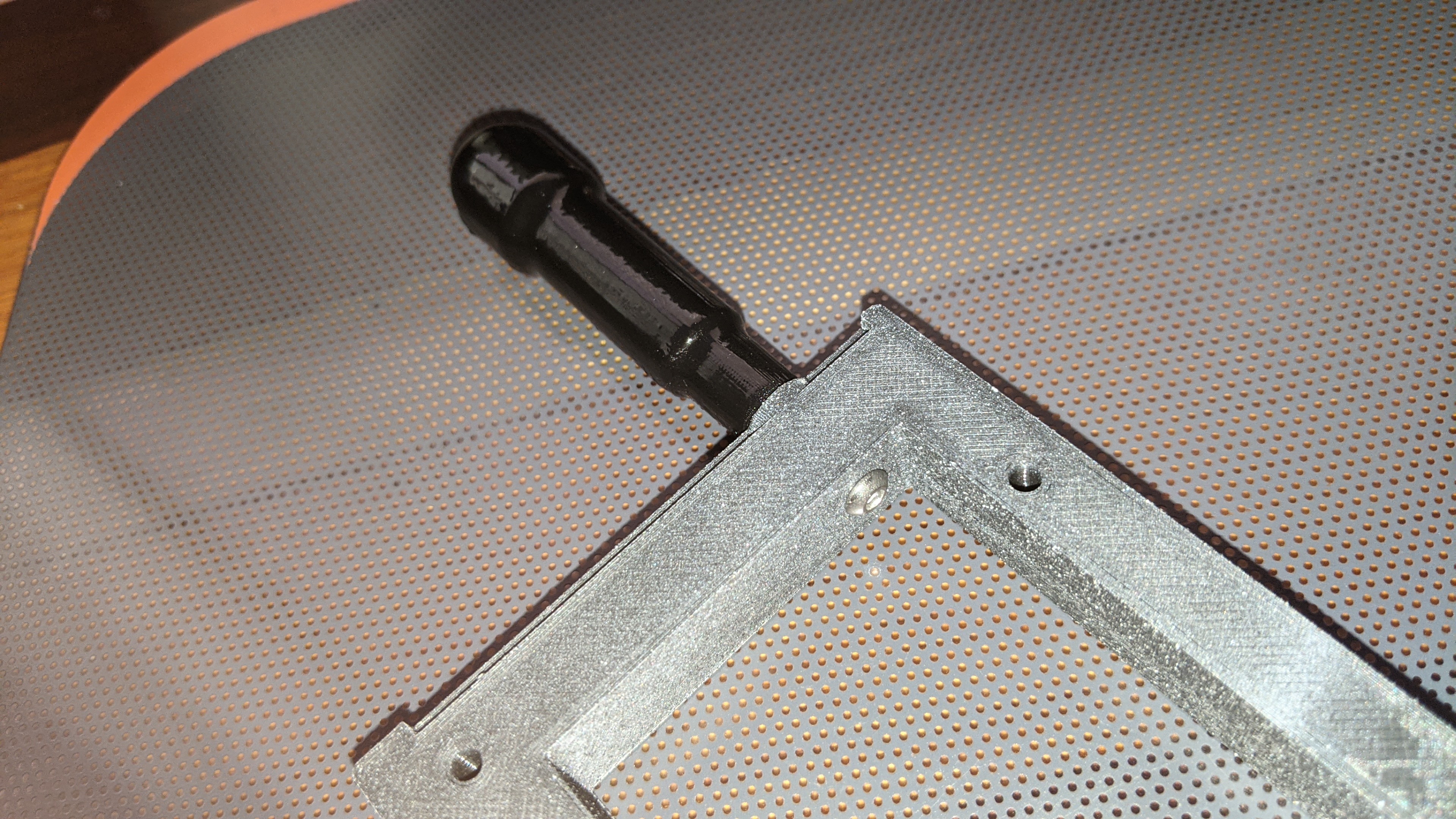 Printed the antenna in TPU, and dipped it in liquid electrical take for that vinyl coated look. The only issue here is that the M3 is a tad small, and an M4 a tad big. Probably gonna drill it out for the M4, as the M3 has some friction to it holding the antenna, but it's not "tight" by any means. 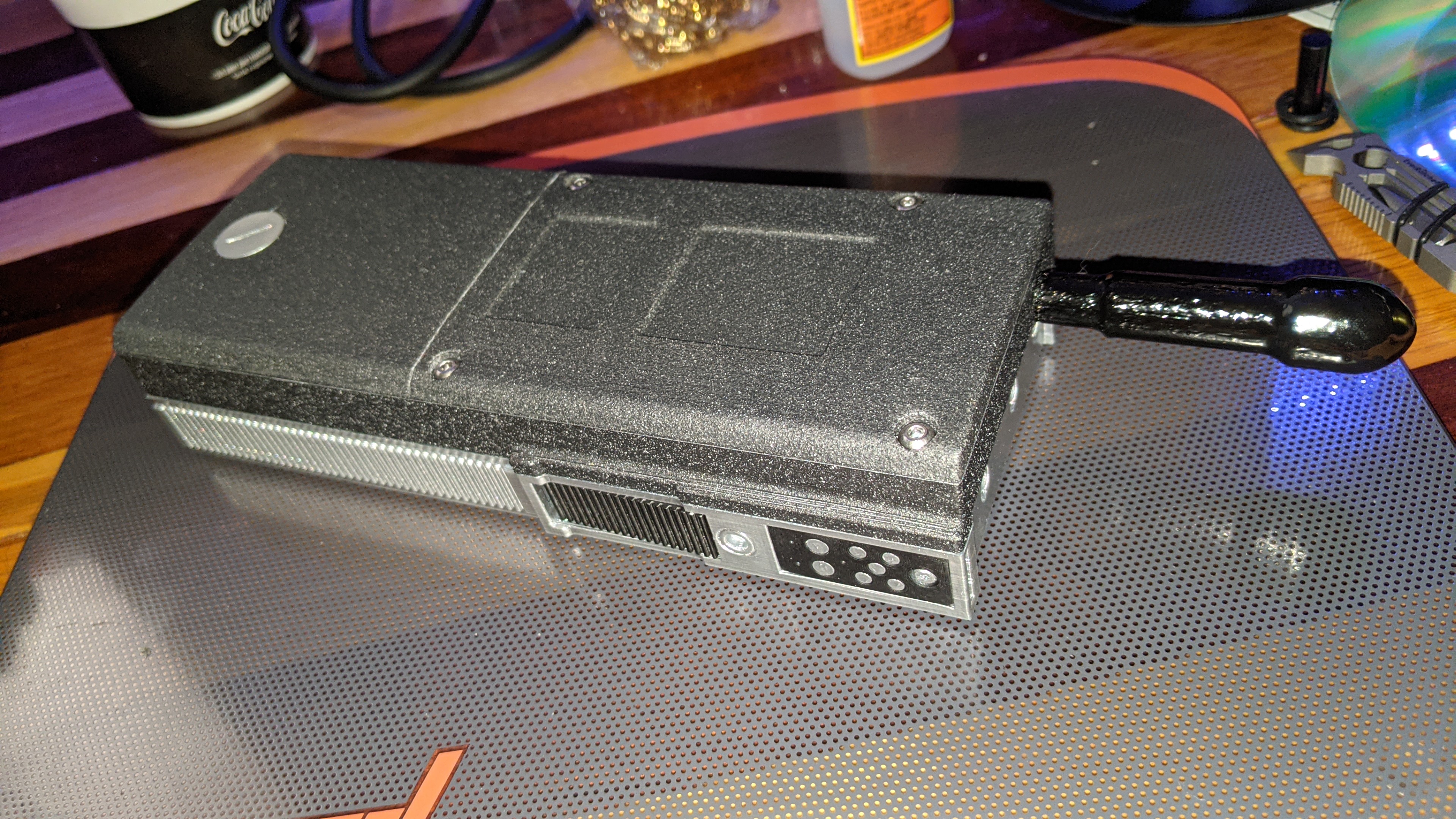 Back assembly all done.

It's SO CLOSE. The front needs some filing as the registration band that seats the front to the mid-body is REALLY tight, and I just need to open the groove up a tad. But final assembly is within reach now. I also have a little additional touch I'm gonna add for flavor that, while not screen accurate, will be period accurate, I think. More on that later though.
Nighty80 liked this 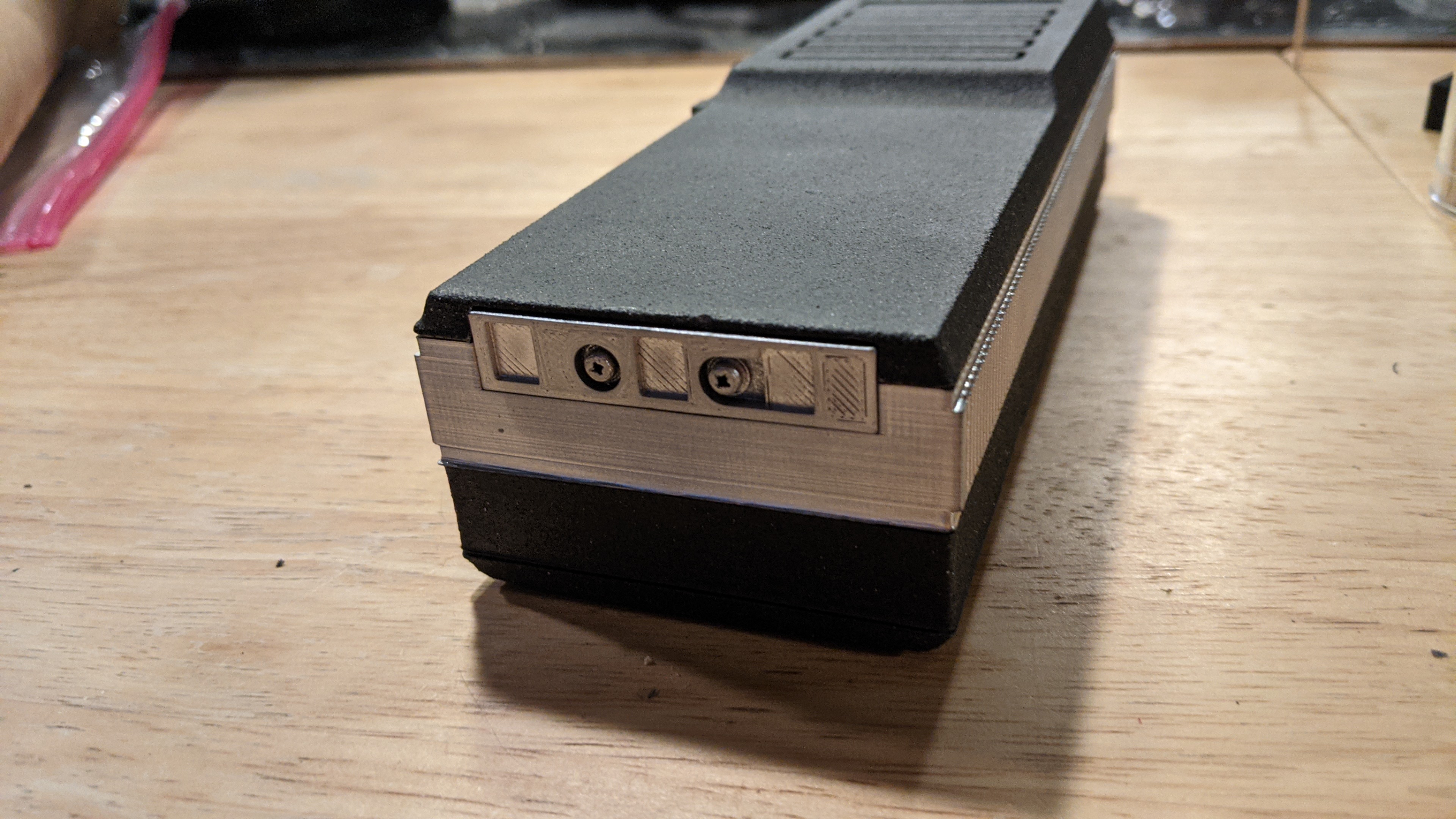 All the last stuff going on now. Not much bottom detail to speak of, but there's at least this plate installed. Simple super glue holding this together. If I get squirrelly, I might drill out the fake screws and put in some real ones. 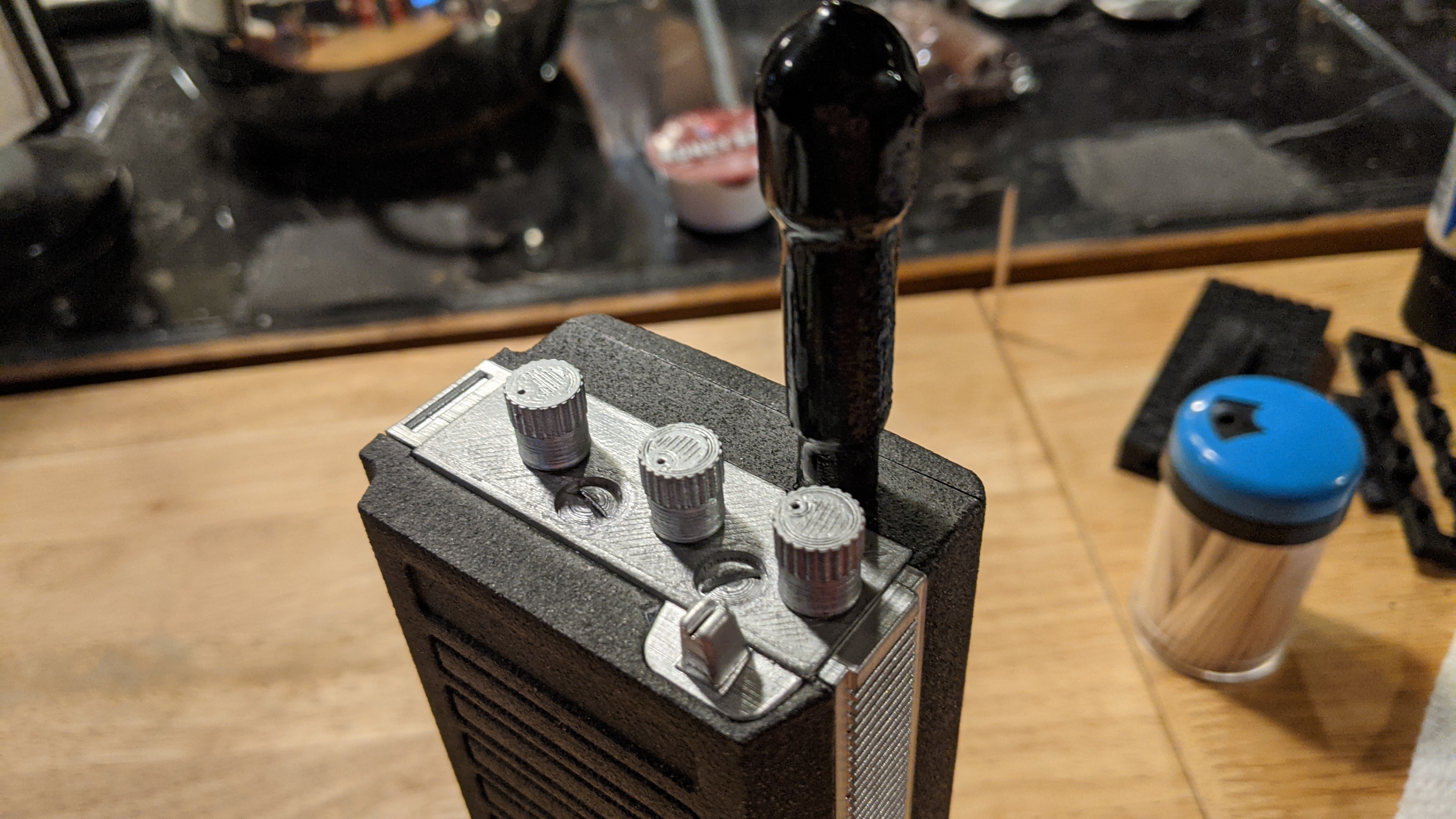 Controls all applied now. I did drill out the hole for the antenna and went up to an M4 screw instead of an M3. Had much better bite on the antenna. I want to come up with a way to apply some of the control markings here at some point, just for completeness. 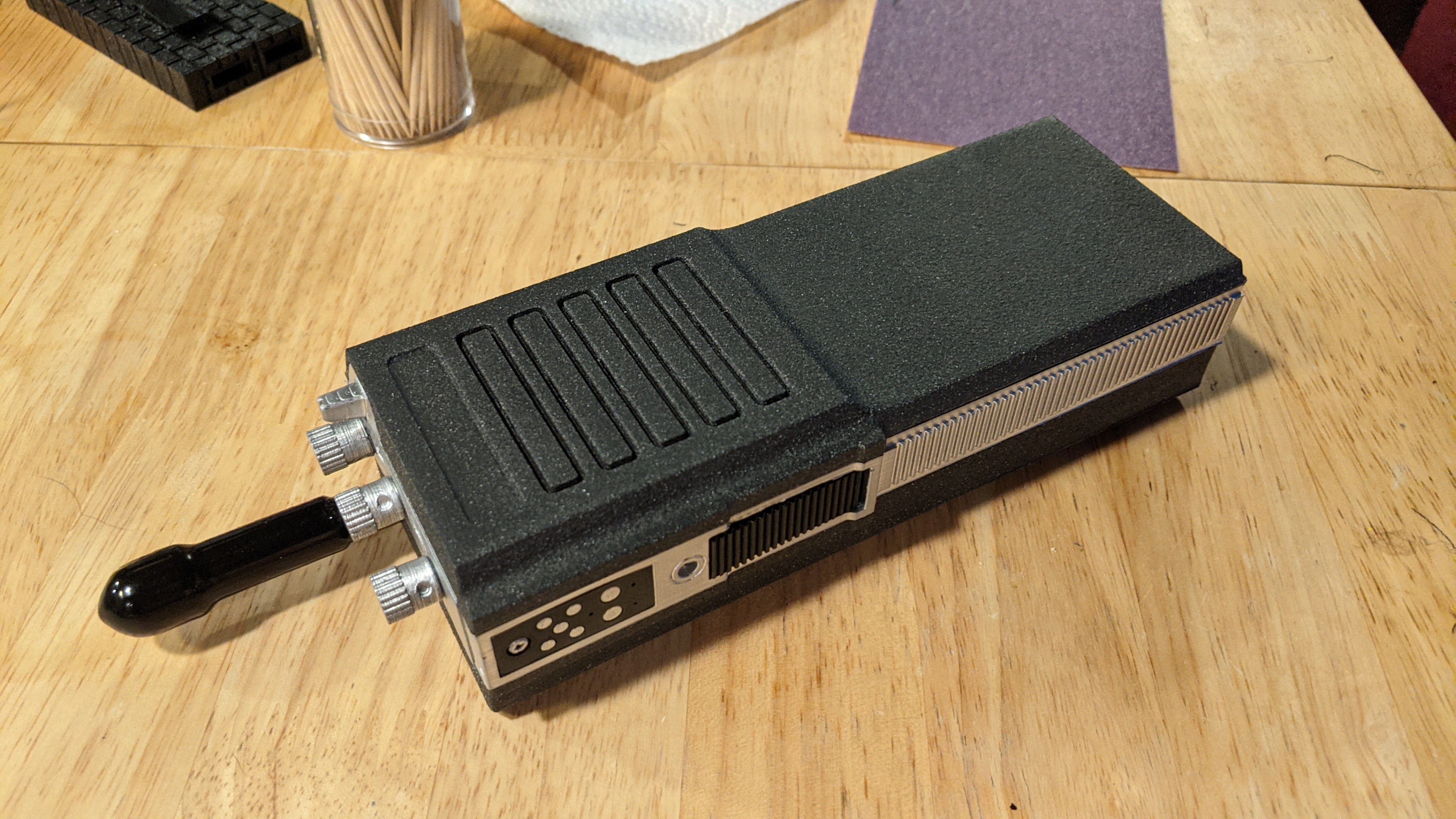 And a final look. I realized after the fact that I did this before putting he sticker on the front. Oh well, you can imagine that part. I'm also going to add some other little touches to dress it up, and maybe let it beat around on the floor of my truck for a few days to give it some patina. I'm not sure I could be much happier with this outcome though. If you saw it sitting on the counter and didn't know, you'd never think it wasn't actually a radio.
tobycj, Nighty80, cristovalc liked this

Reply
Return to “Other Props”
24Jan