You've got to remember, these are a big deal to us but for most people they don't even know these are going to be a thing. I bet the boxes these are shipped in don't even have a do not release before date on them.

I did my retail stint at Kmart for a few years and can tell you that unless something is having an advertised or promoted release (like music or movies) getting new stuff out on the shelves is just another thing on the endless to-do list whose priorities are always subject to change.

Yesterday might have been the official release date but just keep in mind it could still take a few days before you can see them pop up.

Which sucks because I'm an impatient type of guy.
ProtonPack83 liked this

By ProtonPack83 -  April 27th, 2020, 4:05 pm
-  April 27th, 2020, 4:05 pm#4934138
I did luckily find 2 sets of the Retro at a local Walmart and they were actually hanging on the pegs when I went to get milk and other essentials today. The RGB figs were just a bonus - but I was surprised to see them on the racks. One PKE meter was left as well. I only bought one full set and left the other for another happy buyer. Although some of the paint apps had some flaws, overall I think these are so much better than the Hasbro Star Wars Retro line. I can't believe the cards were this big as a kid, they look huge to me now. The packaging is still killer after all these years...
Peter Venkman Jr. liked this 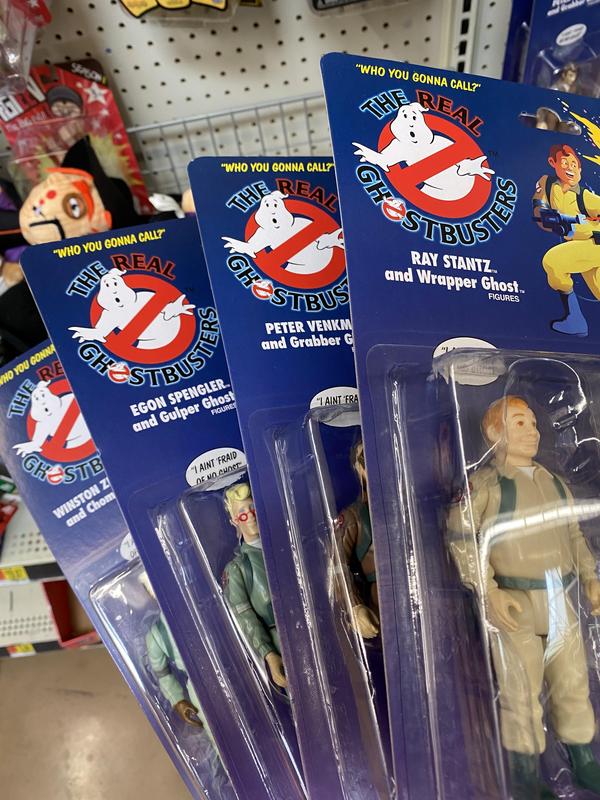 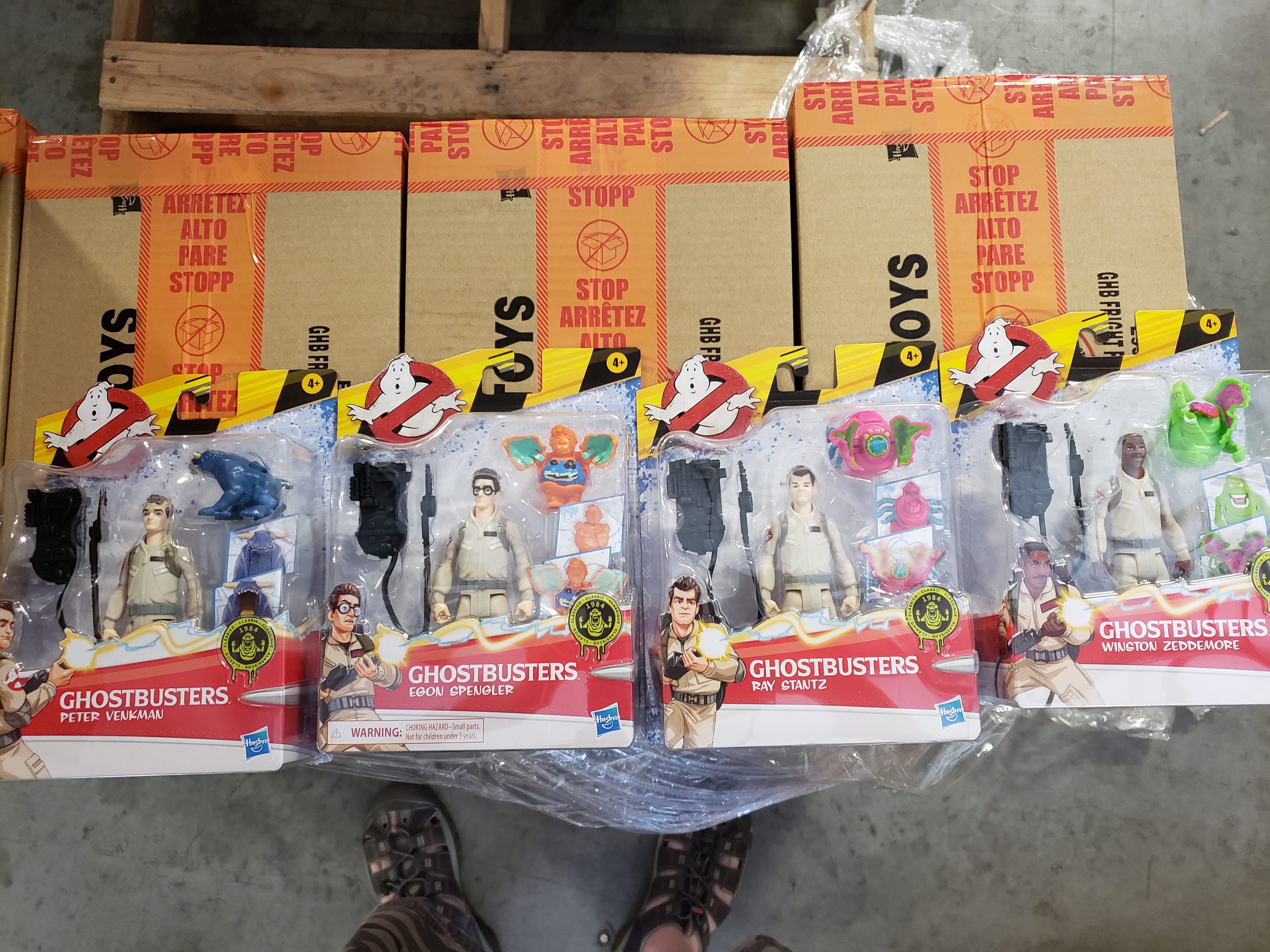 GhostbusterMatt wrote: ↑June 9th, 2020, 12:09 pm Has anyone preordered these through Walmart? I ordered these in February and they are now listed as delayed. Seeing as they have been in stores for over a month, I don't understand the delay.

They're delayed for everyone who pre-ordered. Gotta love Wal-Mart...

Heres a list with links to the updated SKU Figures for the team...
WALMART KENNER CLASSIC THE REAL GHOSTBUSTERS FIGURES UPDATED SKUS

They screw up too with the new listing. Do you see the category for Venkman? "Kids' Room Décor"

To be fair, if I get 'em they're gonna just sit on my shelf so... it's not totally inaccurate. Just change the word "Kid" to "Manchild".
Coover5, Prime 1986 liked this
I really have no idea what I'm doing.

There’ still something off about Bill, though (The new “Harrison Ford” of action figure likenesses?). Though cartoony (most likely pulled from the video game renders), I think Mattel’s head captures him better. I guess Hasbro has how many more costume variants to make it right...and head swapping should be easy.

Oh, and Hasbro...you cant put the Ecto-1 prominently on the inner card and not deliver now. I’ll take Haslab if I have to...anything but a Target Exclusive, please!

I actually have all the carded versions in hand. I can post photos if anyone cares to see them all next to each other?
Coover5 liked this 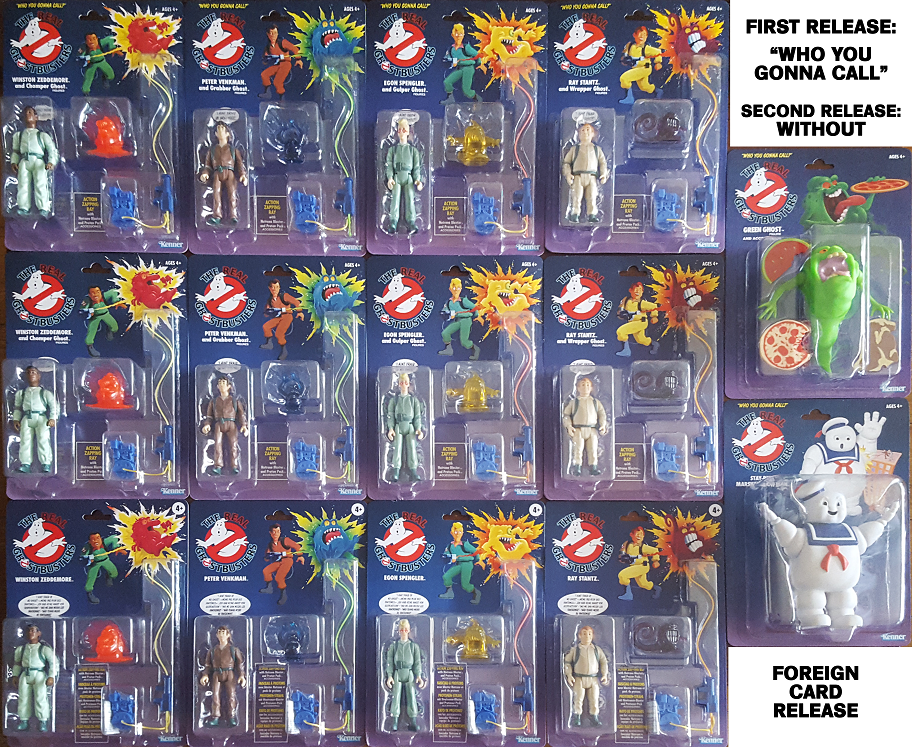 First wave is on the top with the "Who You Gonna Call" tagline above the logo. Below that is the second wave which excludes the tagline. Bottom is the foreign card wave which is also missing the tagline. Is there a version of them with it? Now, Stay Puft and Green Ghost/Slimer apparently have foreign cards with the 4+ being in a white circle as well as the tagline removed. Those I don't have nor have I seen pop up. These might just be photos of product samples? Can anyone clarify? *EDIT* - Nevermind. t40srt posted photos of his Slimer and Stay Puft on the foreign cards in the other thread, so they're out there. 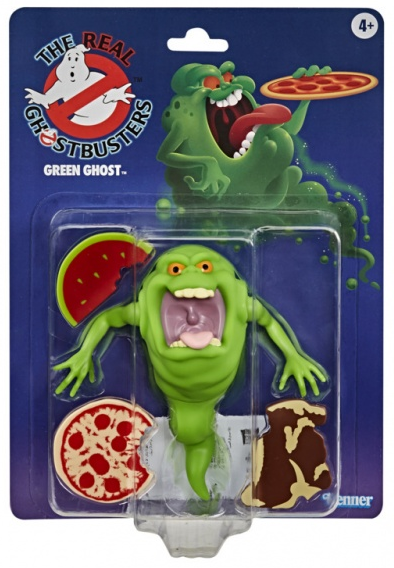 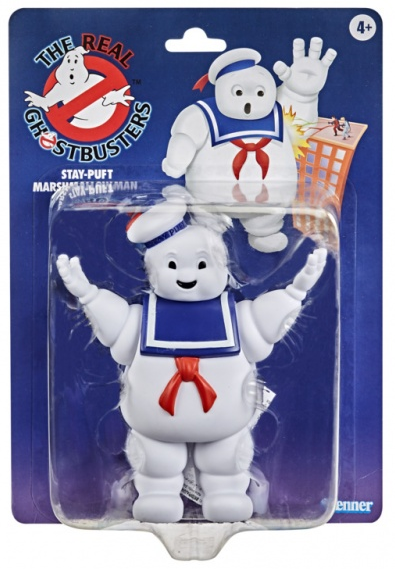 Also, I haven't seen a domestic version of the two ghosts with the tagline removed, but I am guessing they'll be showing up at some point? Hasbro removed the tagline for a reason which is probably due to some legal issue.

Here are the cardbacks. Left is first, middle is second, third is foreign. Tagline is there above the logo on the first and it's missing on the second release. Both cards are identical to each other except for the tagline and the production number is in a different spot. The foreign release has a lot different going for it versus the others.

It's interesting to note that the production number on these is in the 5 digits. Obviously they aren't individually numbered and these represent a batch that went into production. I have a batch of the first wave figures that are batch 00091 and the other being 00101. If you have a batch that's 00001, I imagine you have yourself some of the first to come out of production. Hasbro could be planning on producing up to 99,999 batches of these all the way into the new movie release. Why wouldn't they when these things are flying off the shelves? It's like printing money for them.

910dohead wrote: ↑June 24th, 2020, 4:51 pm I got 2 of the 4 figures from my pre-order on the foreign language cards. Way to go Wal-mart. I was actually shocked they were in actual boxes and arrived in great shape.

I actually have all the carded versions in hand. I can post photos if anyone cares to see them all next to each other?

I just got 6 of mine today. All of them are foreign

By Peter Venkman Jr. -  June 25th, 2020, 6:11 pm
-  June 25th, 2020, 6:11 pm#4936294
@deadderek: I agree, after the whole pre-ordering debacle I went and ordered my Ghostbusters action figures from Zavvi in the United Kingdom since they do ship internationally as well. I am glad that I did order from them versus Wal Mart since my action figures arrived properly packaged and when they suppose to. Apart from having to wait for my Ray Stantz action figure( he got shipped separately from Peter, Egon and Winston due to Hasbro not giving Zavvi enough to fill every order), I was pleased that I choose to go this route since as I mentioned earlier my local Wal Mart is terrible with their toy department.

The way they handled Egon's glasses is great. Dana looks amazing. The DST figure is so ugly compared to this.

Sure, DST gave us lots of hands for the GBs, but I never use them. Sure they gave us stream effects, but they snap if you look at them funny. Plus most of the figures fall over.

Matty gave us pack in ghosts, but they were undersized compared to the figures. Plus the figures were stiff, had packs that were glued on and too small, and had weirdly tiny heads and huge hands.

The Hasbro stuff is a nice compromise between DST and Matty. Yes, I would like a bit more paint, but what we got works. Yes, a few more accessories would be nice, but I expect we will have plenty as the line grows. Plus a free terror dog is nice. For a first showing, this is a pretty solid wave.
Ghostbusters = Mario Sunshine+Luigi's Mansion?

Clearance already?! Oh no... How come GB never gets the grand treatment the other brands do?!

I’m sure it would have been a massive filling of the shelves if the movie was still happening in a week. Unfortunately Hasbro couldn’t delay shipping these, which Walmart may or may not restock once March arrives. Hopefully the as-yet- UNrevealed Afterlife stuff will manage to hold a noticeable chunk of space!

Coover5 wrote:I'm hoping we'll hear about a repro Kenner firehouse and Ecto. Not that i expect them but I'm hoping for them.

Not gonna happen.
"Ok. opening at number 2, to sub 50 million, next to the 2nd weekend of an animated kids movie, is NEGATIVE. Let me just clear that up right now. There is no middle ground on this. Studios DO NOT spend 100 million in marketing money to open at number 2. No sir. No. No. No. No." - Richardless

That's really useful. Thanks a lot for your resp[…]

Are there no bolts or screws on the sides of the[…]

That was actually my concern with the pushbacks,[…]

Ah thanks, I might give them a look for the bits f[…]