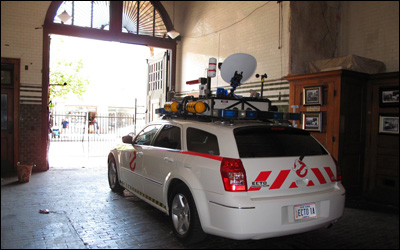 A select number of Ghostbusters Fans' gained access to Fire Station 23 in Downtown Los Angeles for a private tour yesterday. Fire Station No. 23 was the interior shooting location for all shots from inside the Firehouse in Ghostbusters, as well as the Brownstone party location from Ghostbusters 2. It has been used in numerous films and TV shows since Ghostbusters like The Mask, The A-Team, Big Trouble in Little China, and Flatliners. A similar Firehouse, Hook and Ladder #8 exists in New York for the exterior shots in Ghostbusters.

The group was granted access to every floor, including the roof and upstairs Chief's quarters with the last remaining firepole in the Fire Station (and yes the pole still works!). The group was also allowed to park their Ectomobile in the engine bay, and stir up some Ghostbusters 3 rumors amongst the locals. Photos and video of every square foot of the Fire Station will be available from Ghostbusters Fans soon!

Here is a video to tide you over:

Vincenzo330 wrote:I recorded every square foot of the firehouse. The camera was a little shaky and the lighting wasn't always great but I think we got it all. Unfortunately since its 1080p video the file size is huge. It's gonna take a little while to get all the video spliced and uploaded.

Looking forward to this.

elsoldao7 wrote:That's awsome! I can imagine the buzz going around after seeing the car in there!

elsoldao7 wrote:That's awsome! I can imagine the buzz going around after seeing the car in there!

None of them tweeted?

AJ Quick wrote:
None of them tweeted?

Some of them have got to have DSL in their boxes.

Actually, you'd be surprised how many homeless people have laptops and cell phones in Los Angeles. I've actually met some who had facebook accounts.

kind2311 wrote:I had an amazing time both before and after. Meeting Borzou and hanging with Boomer and my friends just made for a great day. And the evening at V71's was the icing on the cake. Not a day I'll soon forget

By 69428scj -  July 3rd, 2010, 8:50 pm
-  July 3rd, 2010, 8:50 pm#242843
I'm telling you what guys, after talking to Daniel once and then not being able to reach him after multiple calls then waiting an hour and a half outside the gates, I was really scared that this wasn't going to happen. Thankfully it did and all I can say is I'm glad I was a small part of it. It was everyone who came that made it an awesome experience! Daniel was very receptive to having us back so in the future so I will be organizing more trips so stay tuned. I'm definitely looking forward to all the pics that everyone else took!
Owner of The Ect-OHIO

jogi82 wrote:oh man! if i would have the money, i would build my self a house like H&L 8 with the interior of engine 23!
then i would invite all gb fans and fanfilmer!
where do i get the original construction blueprints of this locations? (just in case i get rich, or so)

jogi82, this thread doesn't have the original blueprints (it does have info on them) but it probably is the next best thing:

Building a replica of the H&L 8 with the interior of engine 23 is a challenge because the engine 23 building must be twice as long as the NY building. As part of the charm of the GB fire house comes from its size/proportions, its the interior that has to be adjusted to fit in.

I’ve been staring at those for weeks trying […]

It's gonna go so well with that beautiful pack! […]