Radio Holsters or: How Your Entire Life Has Been a Lie

So, we've beaten the issue of the radios into the ground so many times over the past 15 or so years; surely there's nothing left to discuss, right? No news under the slime?

For the longest time I was confused as to what, exactly, was up with some of the radios in their holsters. Debates went on over which models were used: the short standard versions or the taller PL versions. See this thread in which I put my foot in my mouth acting like I know everything. I don't, and neither did anyone else.

Venkman's radio popped out of his holster a bit, but it was the short PL version. Egon's did too, though we don't know for certain which one he had. Turns out everyone (and I was a skeptic at first) was right about the radios and how they sit in the holsters. Something was off. They don't do that in the stock leather holsters made for the MT500. We also cut the side panels off our leather holsters to make them more accurate, but almost never came across a truly screen-accurate holster. Lots of things never added up.

But then we got the movie on Blu-Ray:

We can see more details in the radio holster, and they don't match what's been commonly available. Take the border behind the snap, or the different placement of the Motorola logo. Some tried to add these details into their fan-made leather holsters, making them more accurate than even Motorola's own MT500 holsters, which is a true testament to the ingenuity of this community.

But what the hell WERE the original holsters?
Ladies and gentlemen... 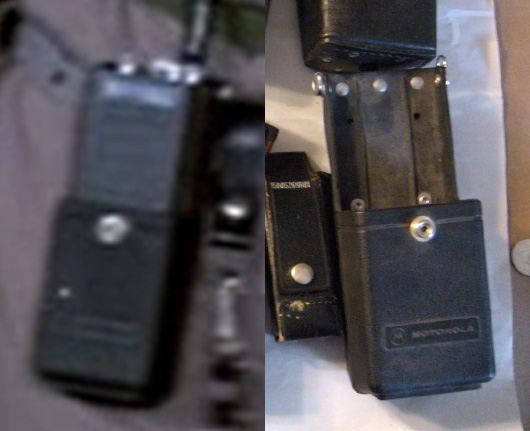 This, I submit, is the original holster: originally for a Motorola HT440 or HT90. Part number NLN7444A. 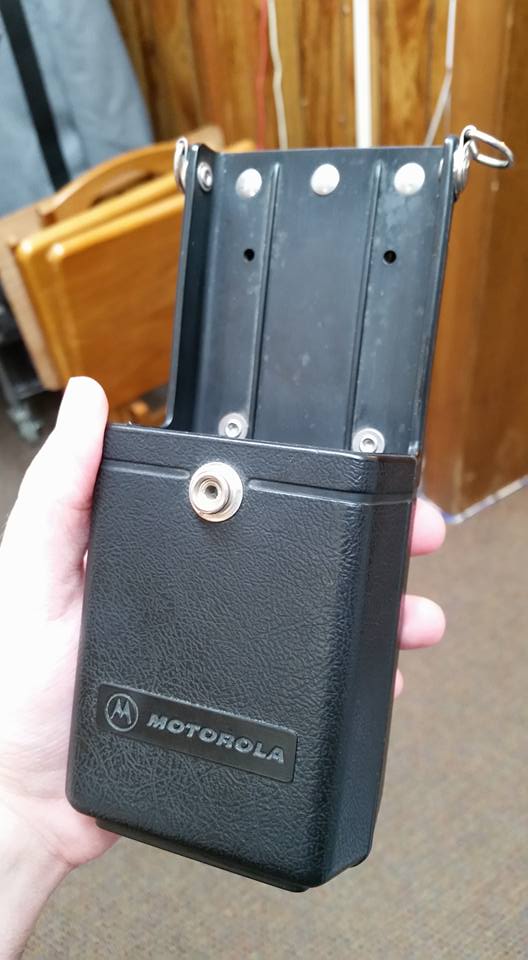 It looks pretty, but there's a sad twist. I really can't recommend buying one. They pop up from time to time on eBay, typically for around $50 (which is way more than some of the durable fan-made holsters), and while I and a few other members have purchased them, we still carry leather holsters. Why? 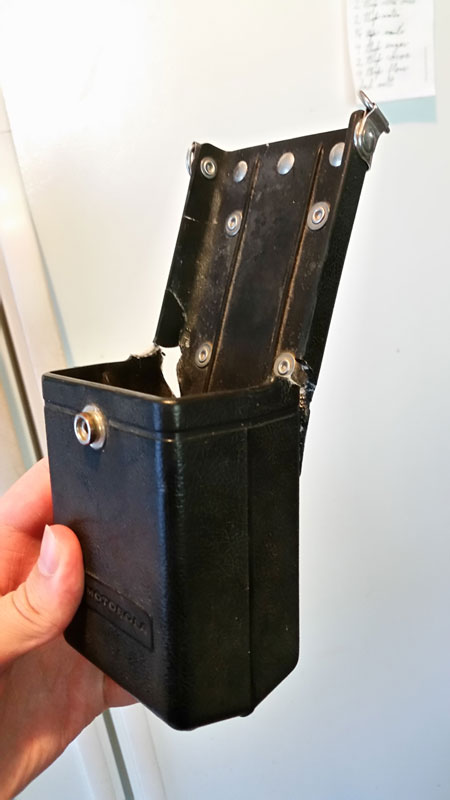 They are brittle. Brittle. As. Hell.
Seriously, they're made of some kind of hard rubber or thermoplastic, and age 30 is not kind to them. So after you track one down, drop $50 on the right model, and wear it once, the slightest nudge will crack it, and no glue known to man seems able to touch it. It seems like a better bet to get people casting these things in flexible resin or rubber.
Smeghead, alphabeta001, MasterOod and 4 others liked this
Want to build your own uniform accessories?
Check out my Templates, Patterns, & Downloads!

I've also tried gluing the cracks with Gorilla super glue gel. It works but then it just cracks in a different place. Agreed 100% a replica would be the way to go if you're wearing these.
Jairus liked this
Lando System?
Lando's not a system. He's THE MAN.

Would be interesting to see where it goes though, with a replica of course! A stronger one?
Pretend for a moment that I don't know anything about metallurgy, engineering, or physics, and just tell me what the hell is going on.

This was from January or so this year.

After this picture (taken minutes after I opened the box from eBay) I picked the holster up by the belt loop and it cracked like the photo posted above.

I had hollowed out the radio to save weight and it still broke.

The other split down the front and sides.

Some may be sturdier than others but the two I've owned were not reliable at all, unfortunately.
Lando System?
Lando's not a system. He's THE MAN.

Sorry to hear the damn things are so brittle, I'd definitely propose the creation of a happy medium: leather holsters, like the MT500s we've been using, but styled to resemble HT440/HT90.
Feeling overwhelmed by the Covid-19 pandemic? Please visit The Support Thread.

I think I found one for sale but it has one of those metal swivel attachments on the back, and would not go directly onto a belt without the 'female' piece.

Is there a version with an attached belt loop? My leather holster has that same kind of swivel attachment, but I've been wanting a looped holster.

One could look up Urethane Degradation to learn why some are extremely brittle. I don't know if they could be sprayed with a modern clear coat to enhance some rigidity

By EnderWeggen -  March 20th, 2019, 8:48 pm
-  March 20th, 2019, 8:48 pm#4915838
I believe you can stretch leather but its not easy did it to my boots, placed a piece of hard foam ware it needed and left it for weeks. I am just going to drop this link hear for Leather carrying case with D-swivel for radios using larger battery's its still made to this day https://kingradios.net/?s=LAA+0435 only draw back is it has BENDIX/KING instead of Motorola on the lower front. Mine has the D-rinds non swivel and a belt adapter or strap on its back Looks good, Now i just need the radio.

There is no green light on the blue brick only the[…]

I'm going to release some albums and get a Snake a[…]

How did you wire things to run the trap through th[…]

The one I purchased plugs into sound board sold […]