Thought I'd get this party started. 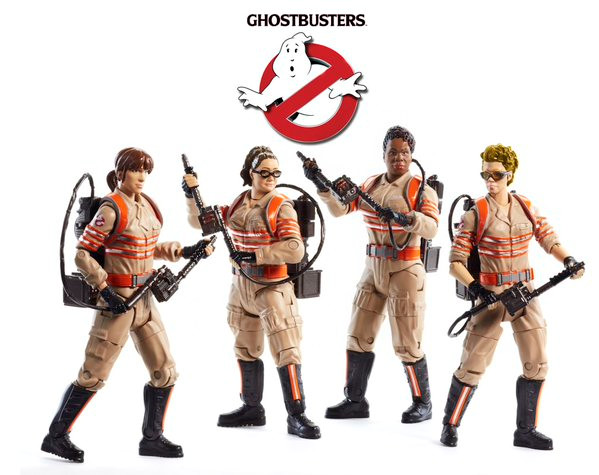 The equipment is a silver tone in the promotional materials and more detailed, also the overalls lack depth

TORN. I HATE WOMEN, BUT THOUGHT THE NEW GHOSTBUSTERS MOVIE WAS REALLY GOOD.

My Ghostbusters Collection: http://www.gbfans.com/community/viewtop ... 89&t=34238
Who Ya Gonna Collect? Blog

Well... never mind... it all ends at Big Lots just the same.
deadderek liked this

By weepel -  January 7th, 2016, 11:15 pm - Posts: 121
-  January 7th, 2016, 11:15 pm #4851001
So... they gave the new Ghostbusters all different body shapes like the actors that played them, but recycled the same bodies over and over again for the "Adult Collector" Ghostbusters figures based off of the original four guys? That's pretty crappy. Not only that, but they never made a Real Ghostbusters line, because they didn't want to spend the money on sculpting a few extra bodies. My feelings about these toys is the same I have for the movie. I have no affinity for these characters.
seekandannoy liked this 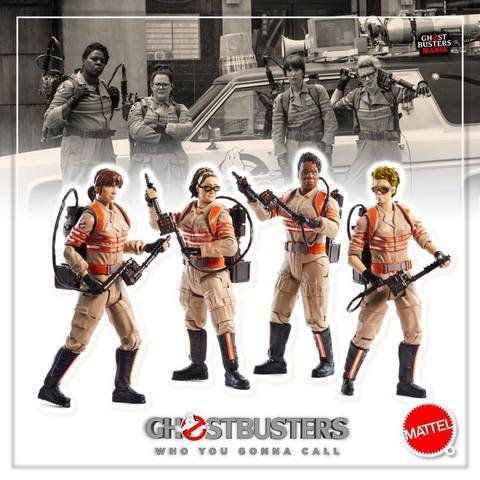 Glad to see that they didn't go the Barbie route. It might be wishful thinking on my part, but it looks like the Packs might be removable. Got this blurb from Infinite Earths...

"Like it or not, Paul Feig's Ghostbusters is here to stay - and not just on the big screen, but in the toy isles to. The director has updated his official Twitter account with an early look at the 6" Mattel Ghostbusters movie action figures, and they honestly don't look too bad.

The four 6" figures based off the characters played by Melissa McCarthy, Kristen Wiig, Kate McKinnon and Leslie Jones will come fully articulated and equipped with a proton pack accessory.

No further details are provided, but we're guessing Matte will showcase these next month at New York Toy Fair with their release slated to coincide with the film's theatrical debut on July 15th."

And so it begins. This is why Sony plastered the original logo & branding all over this remake, to make money.

How dare they try to make money!
Kingpin, wkbarkov, Alphagaia liked this
-- Phil

By joeghostbuster -  January 8th, 2016, 10:49 am - Posts: 3897
-  January 8th, 2016, 10:49 am #4851039
at first I was wondering why they arent the same caliber quality as the original movie figures that MattyCollector produced, but someone reminded me on Facebook that this is the mass retail Mattel distribution as opposed to the adult collector quality limited availability release of the MattyCollector brand... I originally wanted to buy the Kate McKinnon (and maybe the Kristen Wiig) figures but seeing them now, they look like cheap plastic GI Joes, even the size looks like GI joes without anything to compare them to - yes these are the 'production figures' so things could change, but I dont expect to see vast improvements... though I do think it will be really cool for girls to be playing with Ghostbusters toys, another reason I am in favor of this movie, to branch the franchise out a little more.... This is why Sony plastered the original logo & branding all over this remake, to make money.

Wait a minute! Are you telling me major studios produce remake films and merchandising tie ins as well as rerelease the originals on dvd and blu ray for profit and not to please the fan base and make quality cinema?!?!?!

Next you'll tell me rock stars are more interested in money, fame, and pussy than in the art of music.
Kingpin, christphern, DeadRoach and 1 others liked this

I don't agree, Kate McKinnon looks nothing like Allyce Beasley.

Thanks for finding and posting these. They will serve as an excellent guide for repainting the figures, which I will be doing once they are released.

I still hate Matty for the way they handled the Fans and the Original Movie Busters, but I still like their Figures.
Kingpin liked this 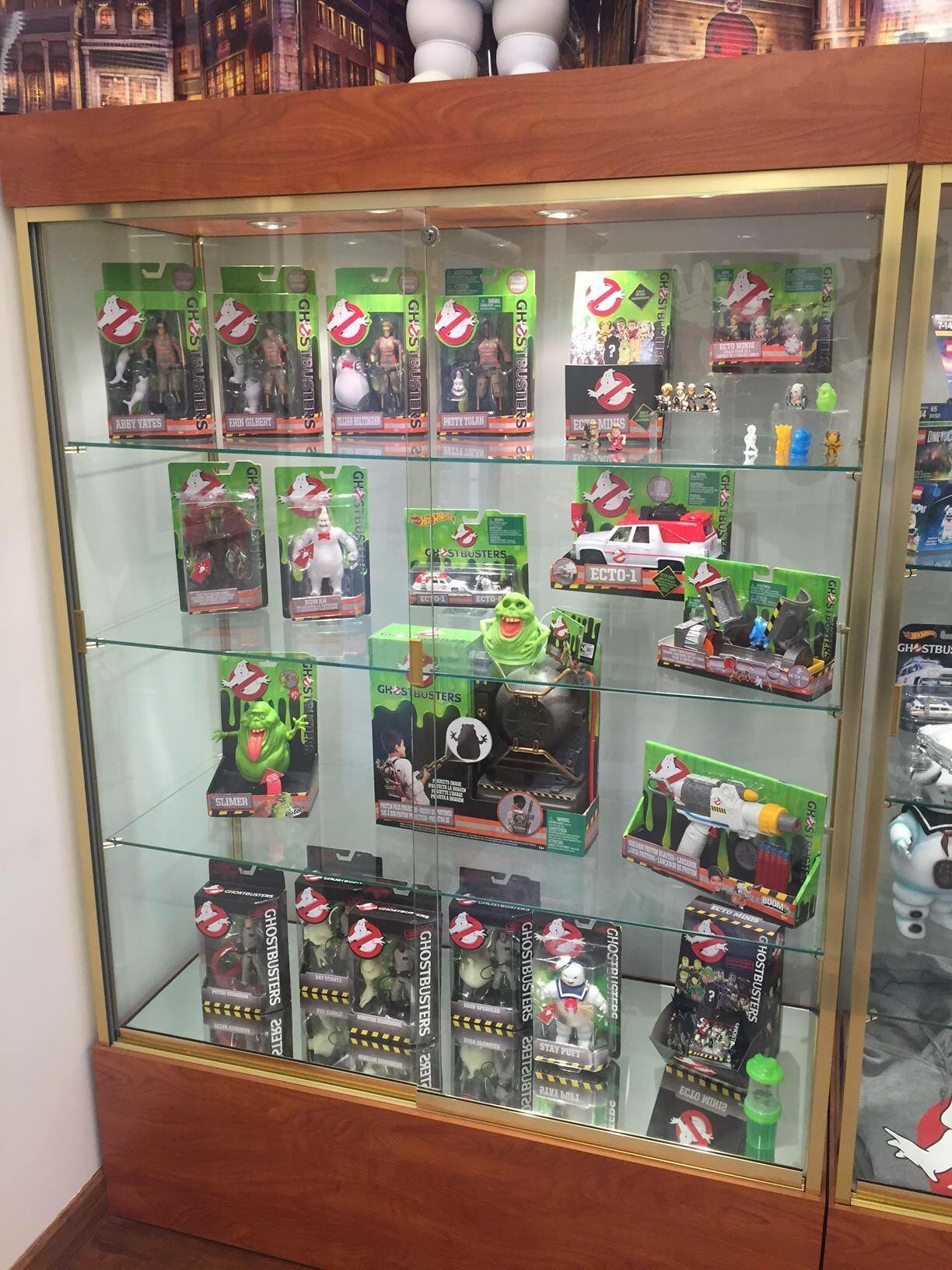 (image stolen from another board)

-  April 16th, 2016, 10:53 am #4860752
I'm guessing these re-releases will retail in the $12.99-$14.99 range versus the $25 "matty" price. There's no way Mattel is going to put out this new toy line bearing collector's prices. This time they aren't marketing to us but to the average toy buyer (a.k.a. kids and their parents). The only thing that would tempt me to triple dip on these figures (besides the collect-and-connect no-ghost logo) would be additional accessories.

The merch takes higher priority over the new movie for me. In it for the ghosts...And still holding out hope for that 6in scale Ecto.

By DarkSpectre -  April 18th, 2016, 10:51 am - Posts: 2260
-  April 18th, 2016, 10:51 am #4860892
Since I have all of the Matty line the only thing of interest to me in the whole case is the Stay Puft figure. I said in another toy topic that I find it interesting that they put a boy on the dress items instead of a boy and a girl. Its a real shame my 7 year old has zero interest in the new film. Sony and Mattel could've possibly gotten a lot of money from me. I'm sure I'm not the only one though
"So your alien had a room at the Holiday Inn Paramus?"
www.facebook.com/seoghostbusters "Serving Southeast Ohio since 2011."

So I found this, and I'm wondering if anyone has s[…]

Interesting. I'm going to try to fix my servo prob[…]

Just when I thought I had lost these to the sands […]