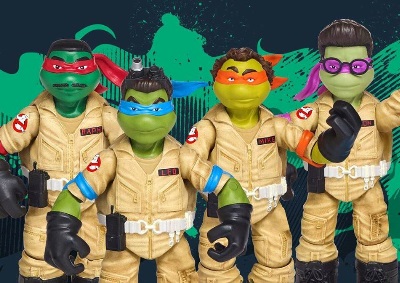 During a panel at San Diego Comic Con, Playmates revealed crossover figures, the Ninja Ghostbusters. Each figure is six inches in size with full articulation, and will be packaged with the familiar Ghostbusters equipment, as well as a unique ghost accessory for each Turtle.

The figures are planned to retail for $19.99 each, and will be a Target exclusive. They are expected to go on sale this fall, and are believed to tie into IDW plublishing's plan to see the Ghostbusters and the Teenage Mutant Ninja Turtles cross paths once more in a sequel to 2014's four-part miniseries.
Feeling overwhelmed by the Covid-19 pandemic? Please visit The Support Thread.

Turtles with hair is freakish looking.

I disagree with the shown mash up! Donatello/Egon is a given. Leo should've been Winston, Raph as Peter and Mikey as Ray.

That is all
Sayscalled liked this

mbd liked this
"We came, we saw, we kicked its ass!"

Check out my site: http://www.followingthenerd.com

By Peter Venkman Jr. -  November 29th, 2017, 8:05 pm
-  November 29th, 2017, 8:05 pm#4901417
Just got my set via Target.com last week and I love them. Defiantly one of my favorite new action figures to come out of TMNT recently. They look even better in person than they do in the pictures. Having ghost figurines with them reminds me of the Kenner Real Ghostbusters line, along with the small wheels on the Proton gun to turn the stream around. Also the ghosts make for great display pieces for any Kenner or Mattel action figure.

I was a bit worried of the rivets bursting the[…]

Apparently he was a dick to Burton the whole time […]