Are we getting a literal ghost town?
Mad respect to Paul Feig for tweeting his support of Jason and how excited he is based off the trailer. That's awesome of him. There's a lot of fans who could really learn a thing or two from him. You can dislike his movies, but he's a truly good guy and he behaves way better than a lot of people in this fandom.


The set video reveals what appears to be a stuntman for the 16-year-old actor behind the wheel of the Ecto-1 in action. Eagle-eyed fans have also noticed one major change to the resurrected vehicle. As seen in the set photos, the Ecto-1 can be seen featuring suicide doors for the new film. You can check it out below.

Suicide Doors?
Kylie Griffin: I was a little girl. Twelve years ago. Jack's parents came over for dinner. We were playing in my room. The Grundel came through the window and grabbed him. I tried to save him, but the Grundel swatted me away. Said he'd come back for me… someday. Nobody believed me. They thought it was a kidnapper. Jack was never found.
Roland Jackson: It's OK, Kylie.
Kylie Griffin: I blocked it from my memory. Until it came back last night.
-Extreme Ghostbusters - Grundlesque (early script)

Although the photographer has made a commendable effort to dirty up their props to make them look like they've languished in a barn, the deterioration patterns don't appear to match the photos of the screen-used car we've so far seen. Between that at the use of a logo that hasn't appeared anywhere in the official or on-set media so far, I'd say that's a fan account.

"Suicide" doors are car doors which are hung on a car frame at the rear of the door rather than the front. The suicide part may originate in their being considered less safe/offering less protection to a passenger stepping out than a conventional car door: Link
SpaceBallz, Sav C, *NormalGamer* and 2 others liked this
What would Ryan do? 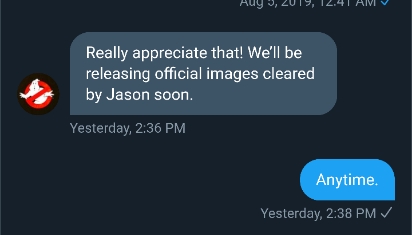 2GunsRacing, Davideverona liked this
"Ok. opening at number 2, to sub 50 million, next to the 2nd weekend of an animated kids movie, is NEGATIVE. Let me just clear that up right now. There is no middle ground on this. Studios DO NOT spend 100 million in marketing money to open at number 2. No sir. No. No. No. No." - Richardless

My guess would be something for EW as well if I had to.
mrmichaelt liked this
"Ok. opening at number 2, to sub 50 million, next to the 2nd weekend of an animated kids movie, is NEGATIVE. Let me just clear that up right now. There is no middle ground on this. Studios DO NOT spend 100 million in marketing money to open at number 2. No sir. No. No. No. No." - Richardless

Edit: Shawn has uploaded more photographs of the car:

Davideverona, back, Sav C and 5 others liked this
What would Ryan do?

-  August 18th, 2019, 6:52 am #4922688
Shawn has reported following his set visit that there are in fact two run-down Ectomobiles on location for the filming, adding further to speculation that Ecto-1A has been recommissioned as a second run-down Ecto-1 prop. There is at the very least ample evidence proving Shawn's report that there are two Ecto-1s currently being used for filming: 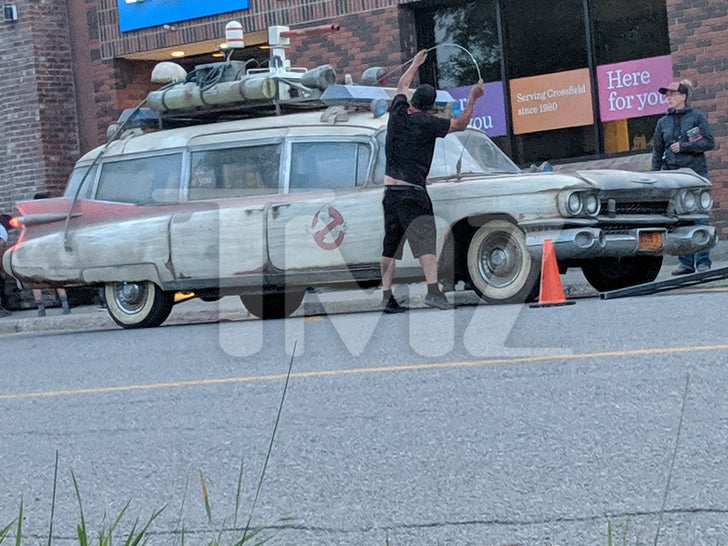 Rust Bucket or "Rusty" appears to have been the first car to make an appearance on-set, and initially appeared the most prominently via the leaked photos posted to social media and TMZ. The first big clue this isn't the same car as PM is apparent by looking at the undercarriage beneath the rear passenger-side door, the rig for the seat isn't present.

Additionally, looking at this screenshot from the leaked footage, there's a distinctive scratch or scuff just above the rust by the bottom-left corner of the rear driver-side door. On Rusty, the scratch looks far shorter, and the rust spot appears less prominent. 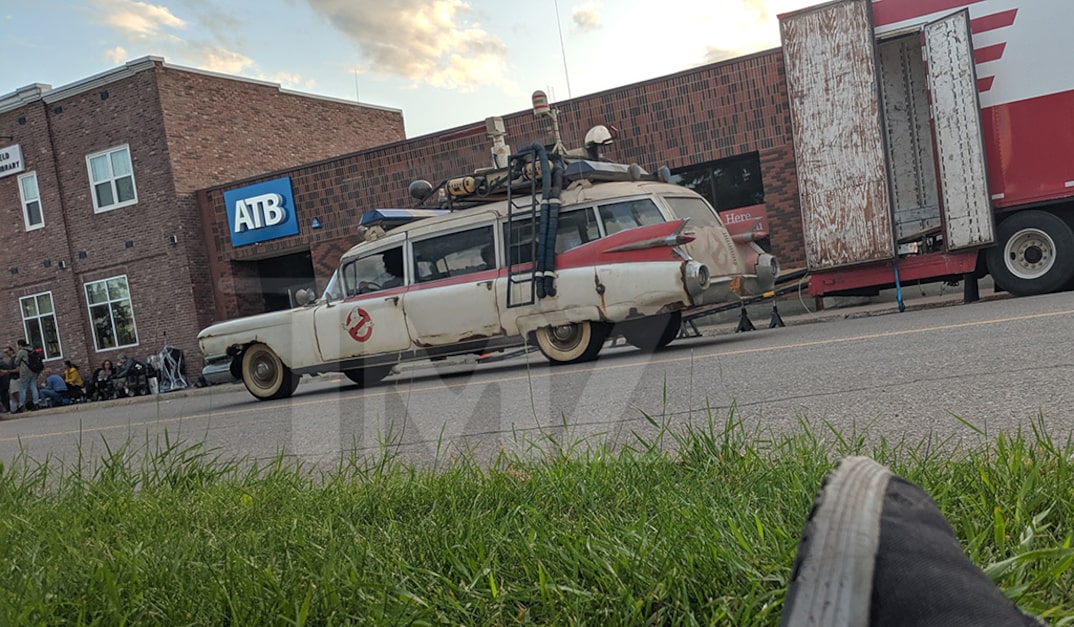 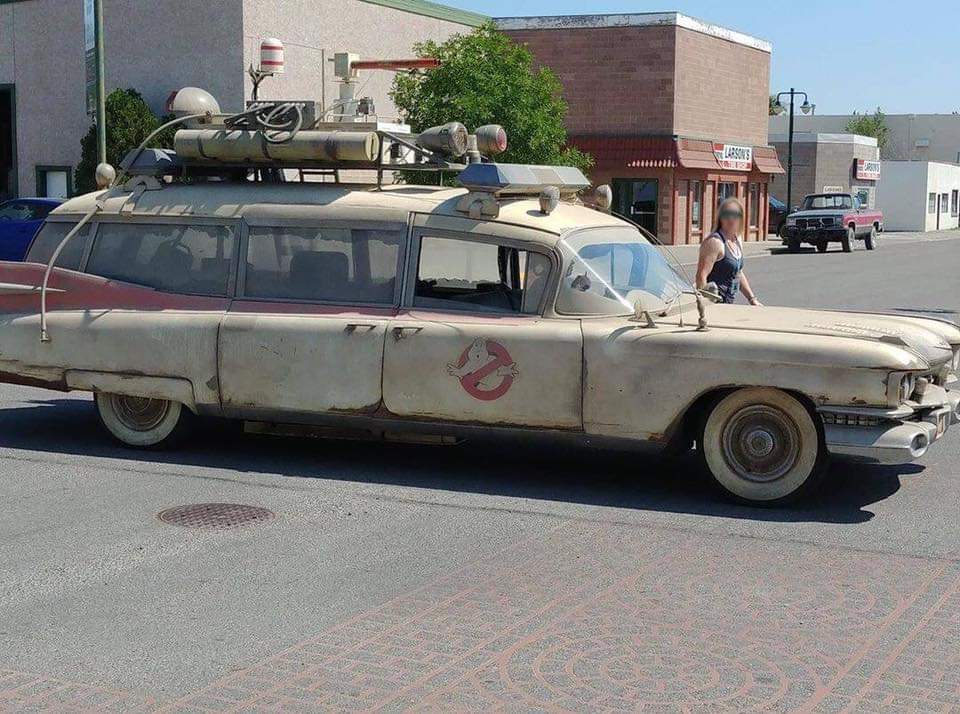 Pursuit Mode's biggest give away is the seat rig mounted to the undercarriage beneath the rear passenger-side door, and how far out the top of the suicide door sticks out from the roof panelling.

Further details that don't match with Rusty are the missing chrome trim on the passenger-side headlights, and a the level of rust/scuffs/scratches on the passenger-side front and rear quarter panel, as well as the fender skirt.
RichRyan1507, EddieSpenser, Demon Vice Commander and 6 others liked this
What would Ryan do?

...
I will see the movie, in theatres, opening day (most of us will). Its just the little things that knocked it (not gonna complain about it again, I promise) into left field for me... And since its one prop with noticeable inaccuracies (to me at least), I saw it as a cockroach... where theres One theres More.
Now... that MIGHT not be the case here... I just have some distinct Concerns.
Once again, I can reserve my fears. Another important note I should mention in my haste is that its Not 1989 anymore... Special Effects have changed, advanced, etc.
But you all are right on Many items on the Ecto... it is nice to see her again, even if she is Rusty & Dusty

I know my ignorance will not go UN-noticed, but hey... thats what I get for having a giant cock-obliterating Gif LOL

Now, if you dont mind, I have to clean some pie off my face and ready myself to eat crow after I pull my foot out of my mouth come 2020.

Glad your coming back into the light. Ecto has a pursuit mode now?They really are trying to compete with the upcoming Knightrider movie!

Heh, I figured I'd borrow the term given the fond nostalgia for Knightrider, and how appropriate it sounded.

back, timeware liked this
What would Ryan do?

A photo of the Driving Rig Ecto has shown up on Gbfans facebook page. So what nickname does it get? Student Driver? Auto Pilot? Self Drive?

They do move in herds.
groschopf, SpaceBallz, back liked this

One might just have the roofrack taken off and replaced with the camera rig, but the rear passenger hubcap is conspicuously absent.
Last edited by groschopf on August 19th, 2019, 6:20 am, edited 1 time in total.
2GunsRacing, Ecto-1 fan, mrmichaelt liked this

The right in the childhood line was classic.
groschopf liked this 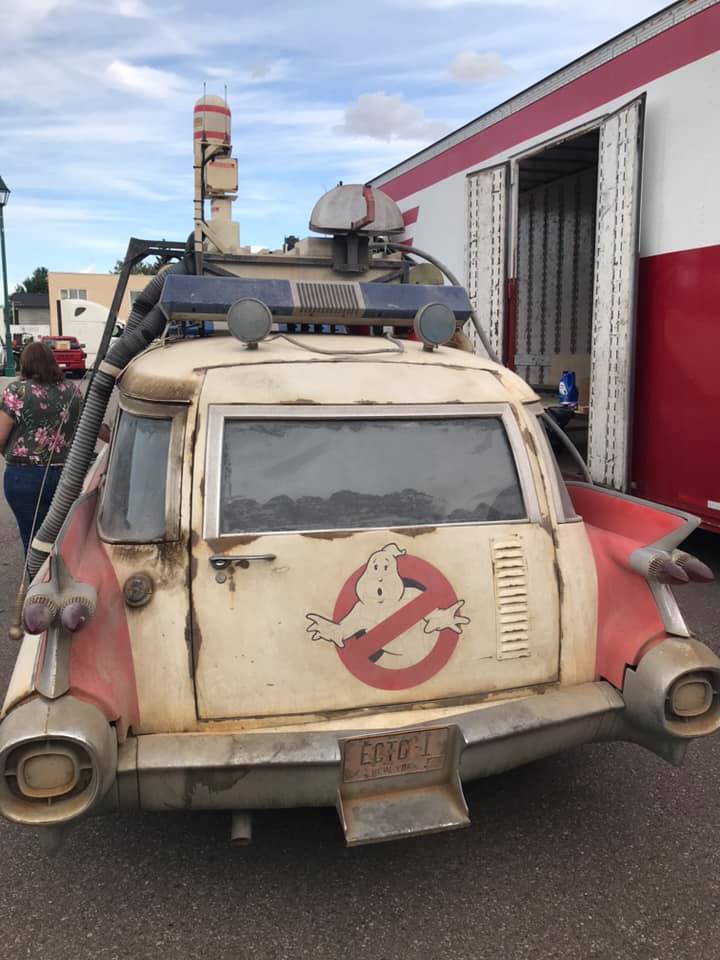 This Post Contains Spoilers
If the Ecto-1A is actually being used in the new film, that should help us identify it; it's unlikely that they would change the position of the gas cap, as it would be a difficult and unnecessary modification. 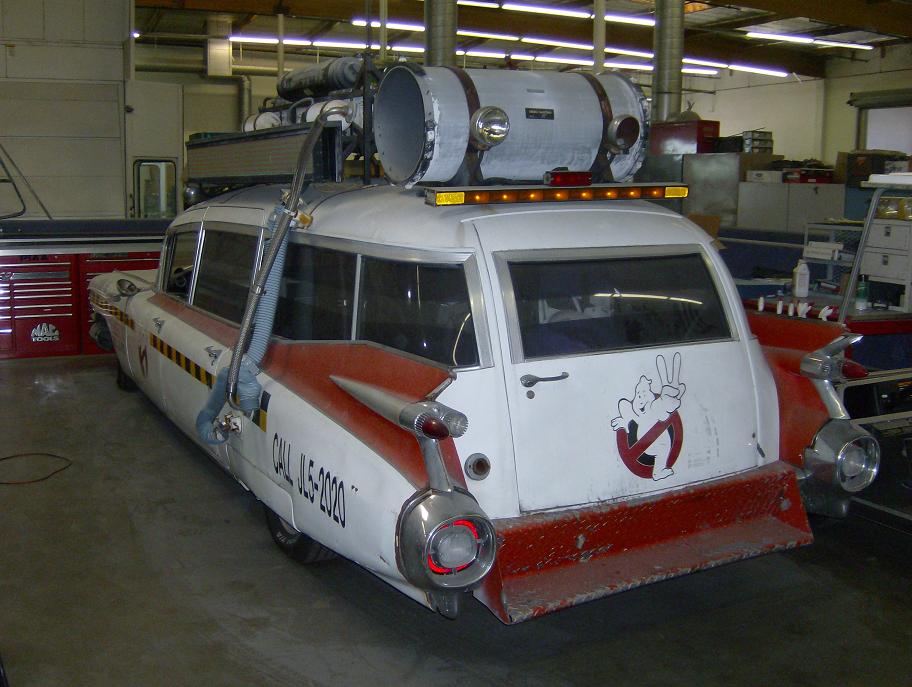 Maybe the kids find the ecto one a parts once the Og's make the scene? The Ghostbusters take back Ecto, the kids get a new vehicle?

Part of me assumes the kids are acting as the “louis from gb2” type storyline. Theyre trying to “help” while the OGs are doing their own thing. Just a hunch.
SpaceBallz, Sav C liked this

A little peak under the hood (care of Shawn Stickel on Facebook):

Edit: Shawn has uploaded more photographs of the car:

I have a feeling the last image of the new movie might be the new ghostbusters getting their first official call. They go down the poll, get into their uniforms. The front doors open like the first film with a blinding light from The Ecto 1 headlights. Only instead of rusty and dirty it's now sparkling brilliant white and looking better than ever. The Ecto 1, lights and sirens blaring, takes off into the night as our new heroes head off into an unseen adventure. Cue credits.
BatDan, Kingpin, robbritton liked this

Also, looking at the pictures made me realize that all of us with Kenner Ecto-1’s that have yellowed over the last 3 decades had no idea how screen accurate they would become one day.
Kingpin, robbritton liked this
That's what she said.

Jason Reitman posted a photo of a slimed stop sign a week ago and said "original formula." Little things like that is what ma makes me excited for GB3.

I’ll say. It warms my heart to see what is supposed to be the classic car, classic proton pack, classic Ecto goggles, am]nd now the original recipe for classic slime.

I am pretty sure someone will be using the classic PKE Meter we just haven’t seen it yet. Again I think it is a good sign that I am this stoked with everything we have seen and we have not YET had official confirmation from Jason or the studio of the original cast returning. I am 100% sure they will be there. It is just 50/50 on the size of their roles. I have faith that they will be decent sized roles. My mind is really racing. In the years since Ghostbusters 2 did they have any luck opening up new branches to just have them all shut down at some point? Of all the things I really want to know WHY and HOW the Ecto 1 wound up so far from New York?

I am so looking forward to the answers to those questions. I am really starting to think about that potential Spengler connection. I mean if the family finds the car and equipment in the house they moved into, it really surprises me IF Egon had the car and equipment and not Ray. Unless Ray helped Egon transport all the stuff to this small town. Did Egon settle down in this town before he passed? Did he take a teaching Job at the High School? If so did Paul Rudd’s character know him? Whatever the case I am sure I am not even close to what they have in mind. I am so glad filming is underway this is so exciting.

Apparently Derek was watching A Team. Don't hassle the Hoff man. Lol. But yeah if Hasslehoff isn't blowing smoke the new film should be out around the same time Ghostbusters premiere's but with no updates were kind of back in developmental hell.

?????
"Ok. opening at number 2, to sub 50 million, next to the 2nd weekend of an animated kids movie, is NEGATIVE. Let me just clear that up right now. There is no middle ground on this. Studios DO NOT spend 100 million in marketing money to open at number 2. No sir. No. No. No. No." - Richardless

It was an action figure of Tracy the gorilla in a […]

This has been a great thread to follow, I love the[…]