By Troy Rogers -  July 6th, 2012, 12:46 pm
-  July 6th, 2012, 12:46 pm#399119
So third time's a charm right? Around two years ago I decided I was going to be a Ghostbuster for Halloween, I stumbled across this site and said man this looks really cool I bet I can do that.... at the time I was unemployeed (i.e. broke) so I started researching pepakura, which lead me to the Halo community and distracted me for a good 6 months from my proton pack. So I eventually took stefan's plans and created 3d files from them and made a pepakura proton pack. well it sucked, it looked low budget, because it was low budget. and since Halloween had come and gone I threw it in a corner and moved on to other projects and school.
Around Feb of this year I was cleaning the garage and started looking at my pep-a- crap pack and said you know now that I'm working I can do it better.... so I salvaged all of my pvc pipes off of it and tossed it in the trash.... I know I should have taken pics of it but I didn't think about it. I knew I was going to start from the ground up so I started fresh with new research and all. This is when I decided to go the Styrene route instead of the wood route... I figured I don't want to have to buy a bunch of wood working tools and lumber for this project... so I ordered some styrene, a new set of xacto blades and using pchrisbosh1's build as reference I set out to discover I can't cut a straight line to save my life.... at least not with an xacto blade.So after starting another craptastic pack, and getting 2 free 4'x8' sheets of styrene from a local print shop I abandoned that project pretty quickly.
I started looking at cnc machines I always thought it would be cool to have one, but never thought I could afford one. anyways I had some extra cash laying around in May thanks to Financial Aid. So I invested in the probotix Fireball V90, which has taken me a while to learn how to use it, so now I'm putting my 3d files to good use. Anyways I wanted to share what I've gotten done so far. everything still needs some touching up but I think its looking good so far. 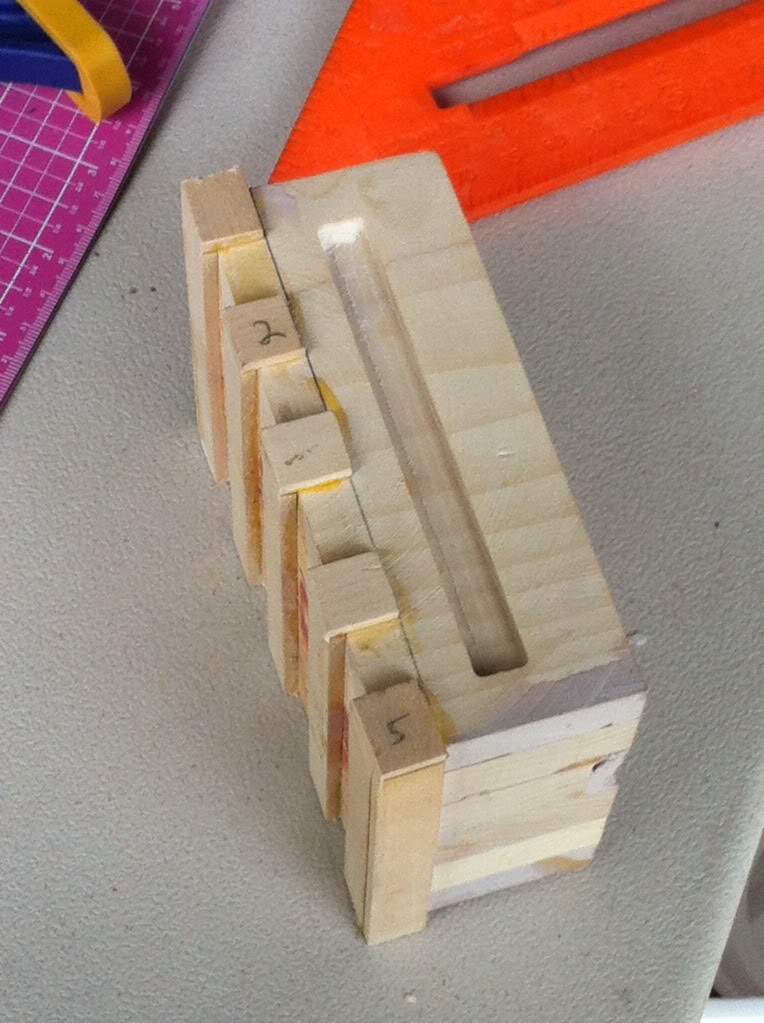 Here is my power cell 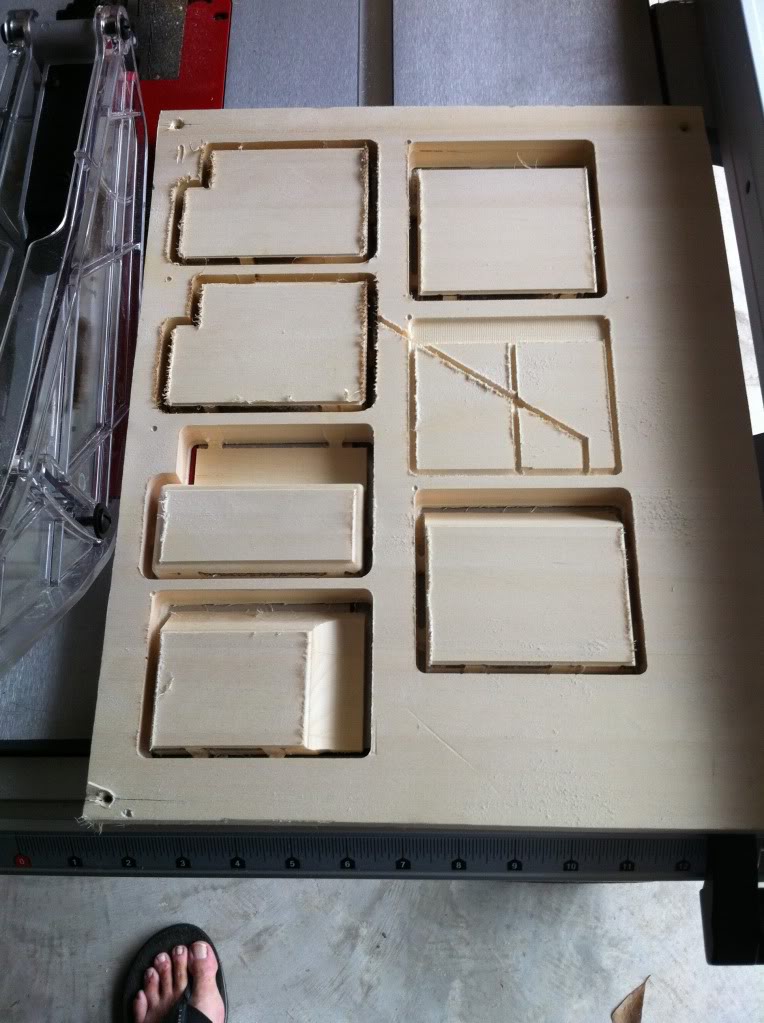 I'll post more pics later, as I get more put together... 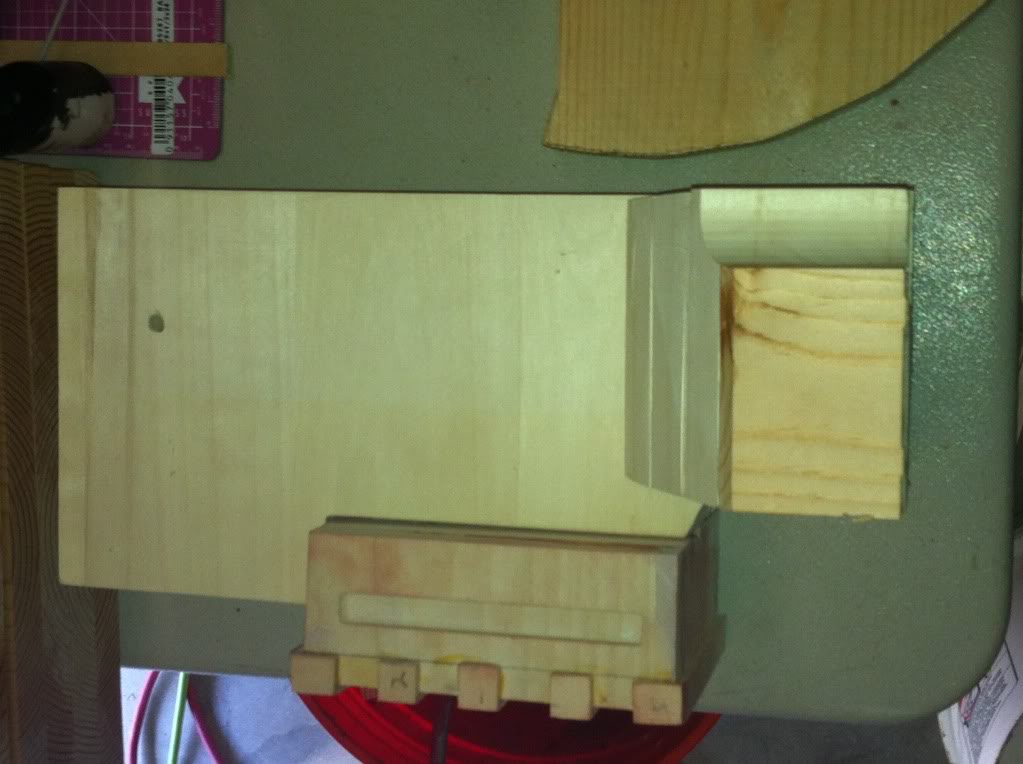 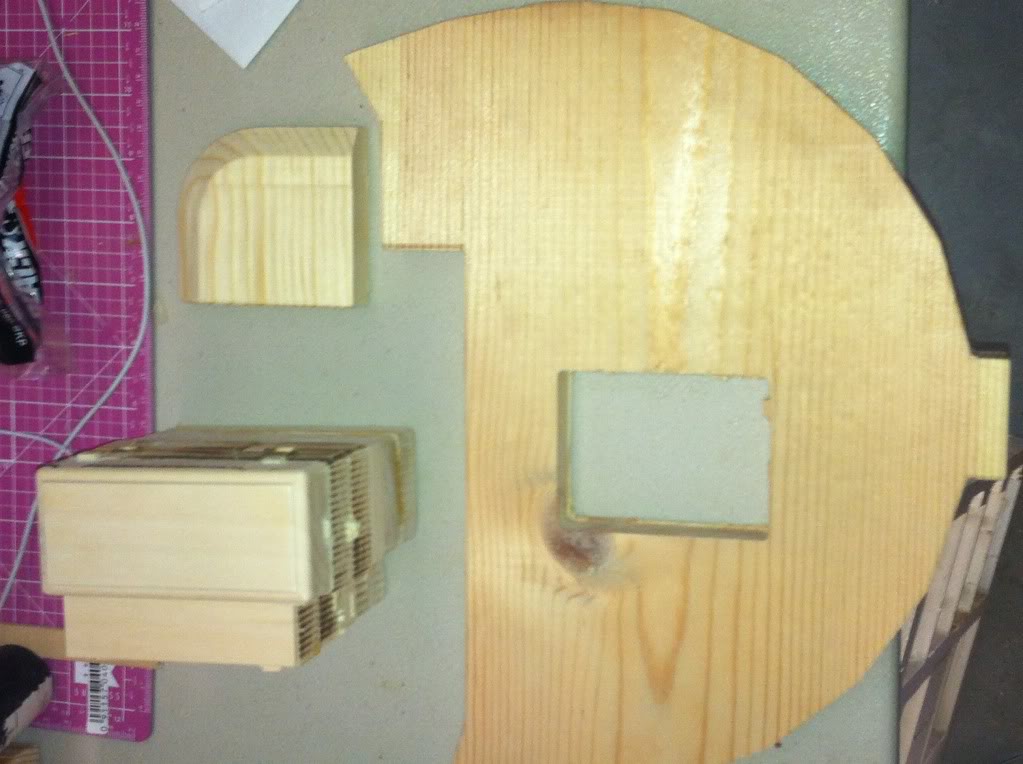 No grain, or chipping. When done, seal the 'open' edges with a mixture of white PVA glue and water (should be like white water when made up). When dry, give it a light sand and the edge will be like glass!

anyways I have an Alice frame question, is there an belt extender available or will I need to make one? and if I have to make one does anybody know where I can get the belt material like whats on it already? i'd like to get the same color so it looks natural...

Update 7/15/12:
well I went to home depot this morning and picked up a sheet of 1/2 & 3/4 inch MDF, and after an hour of cleaning up my cnc machine, I've got it up and running again, working 6 on and 3 off sure cuts into my building time... hopefully I'll have some more pics for y'all later today, I'm still deciding if I am going to re-cut out everything in mdf or not, I guess it depends on how nice all the new pieces come out...

sorry for the double post just wanted to share some pics of what all I've gotten done on my three days off and get some opinions on my cyclotron design before I commit it to wood... anyways I've got lots of bondo/filling work left to do and tons of sanding, but i'm hoping to have everything done and ready to mold by the end of august... mid august would be better since I'll be out of school, but I don't think that will happen.... anyways on to the pics... 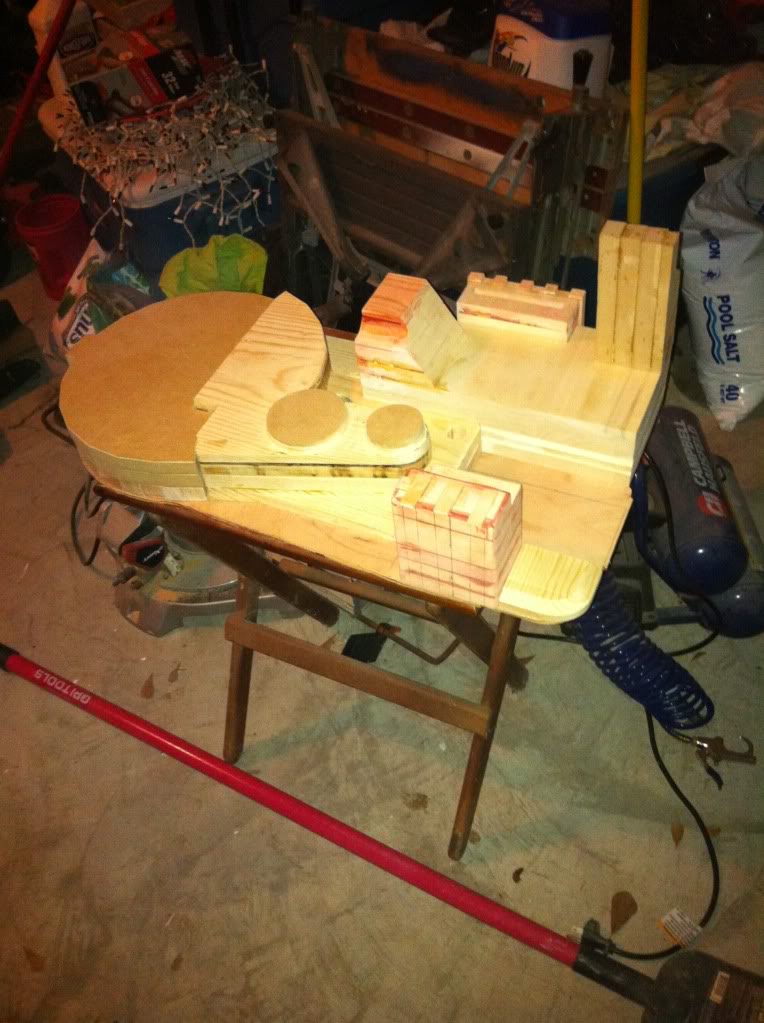 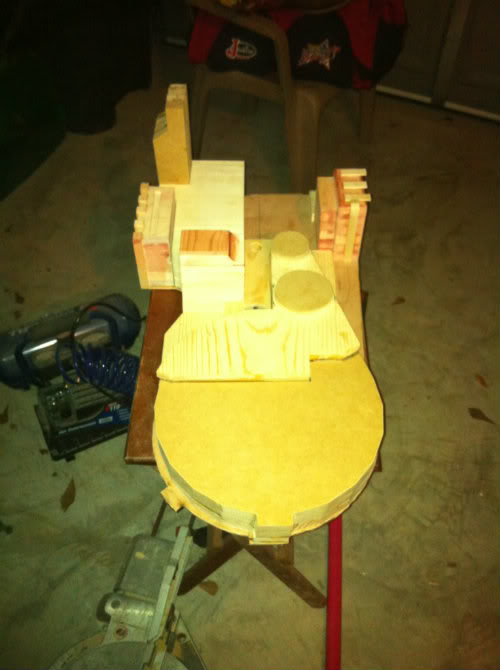 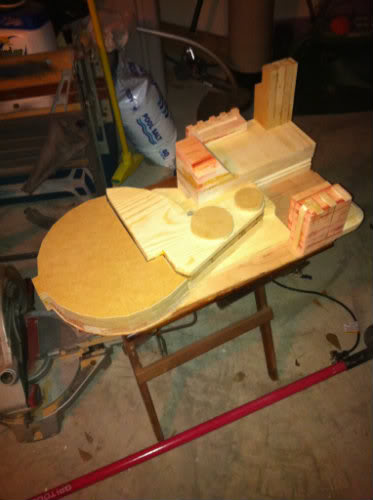 and here's a screen shot of my cyclotron, I know I need to move the top two rings, and I'm not sure about the placement of the N-filter... 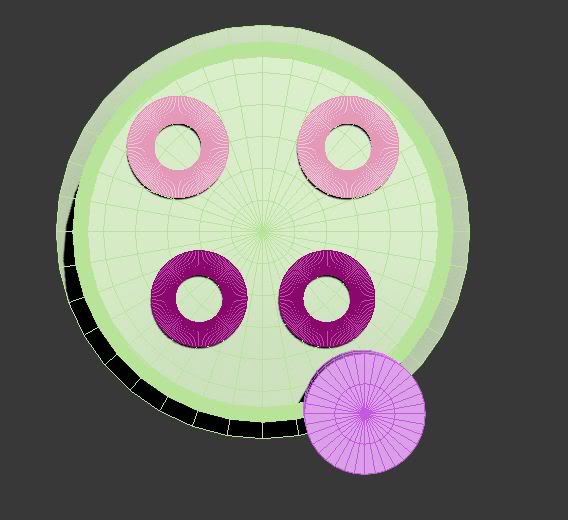 Your pack is looking good, but the weight scares me, seeing as how the back problems I currently have are definitely due to my pack!
Fossil's One-Stop WIP Thread

Your pack is looking good, but the weight scares me, seeing as how the back problems I currently have are definitely due to my pack!

Haven't actually weighted it yet, but I'm planning on molding it, so I'm not worried about the weight right now...

Anyways guys, it's been a long week at work, I'm hoping to get a good two days of work done on my pack before I have to go back to work on Friday... 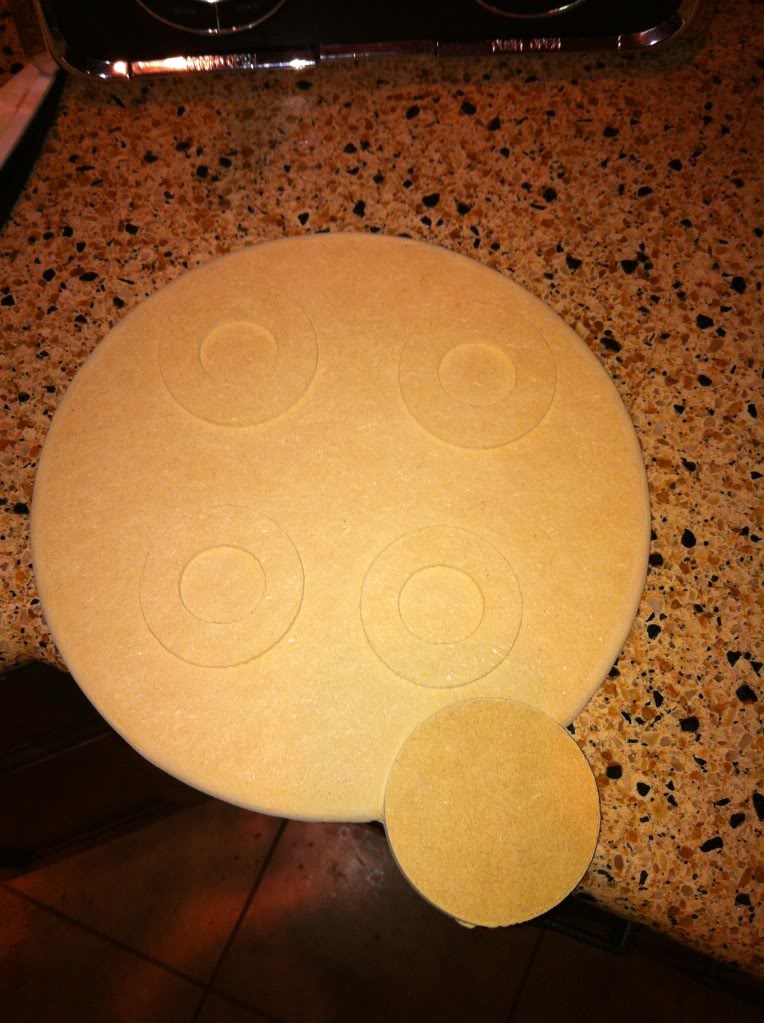 ok so if you look closely you'll see the bottom half of the spacer isn't as big as it should be... 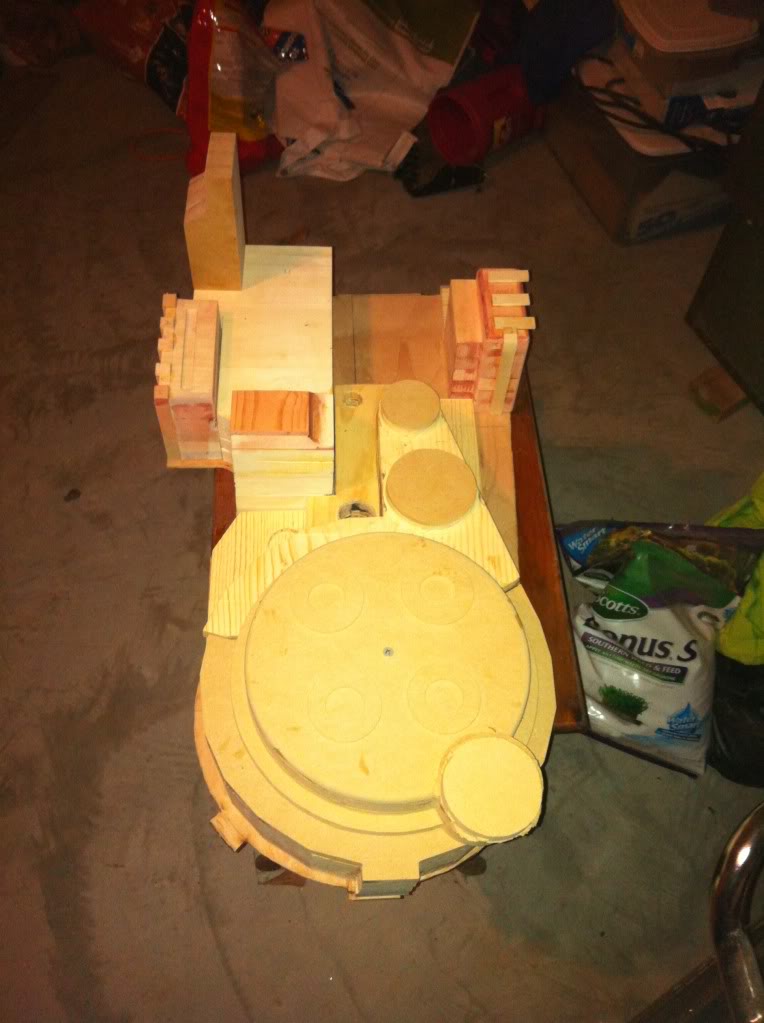 and now that i'm looking at the picture of it I'm definately going to be cutting it out again, I guess I'll take tonight and redesign it so it'll cut out faster I just wish I could cut out the spacer in one piece that would make life too easy though, should have bought a bigger cnc machine I guess haha

anyways here's some more pics of what I've gotten done. In the near future I see lots of sanding, wood filler, and more sanding.... 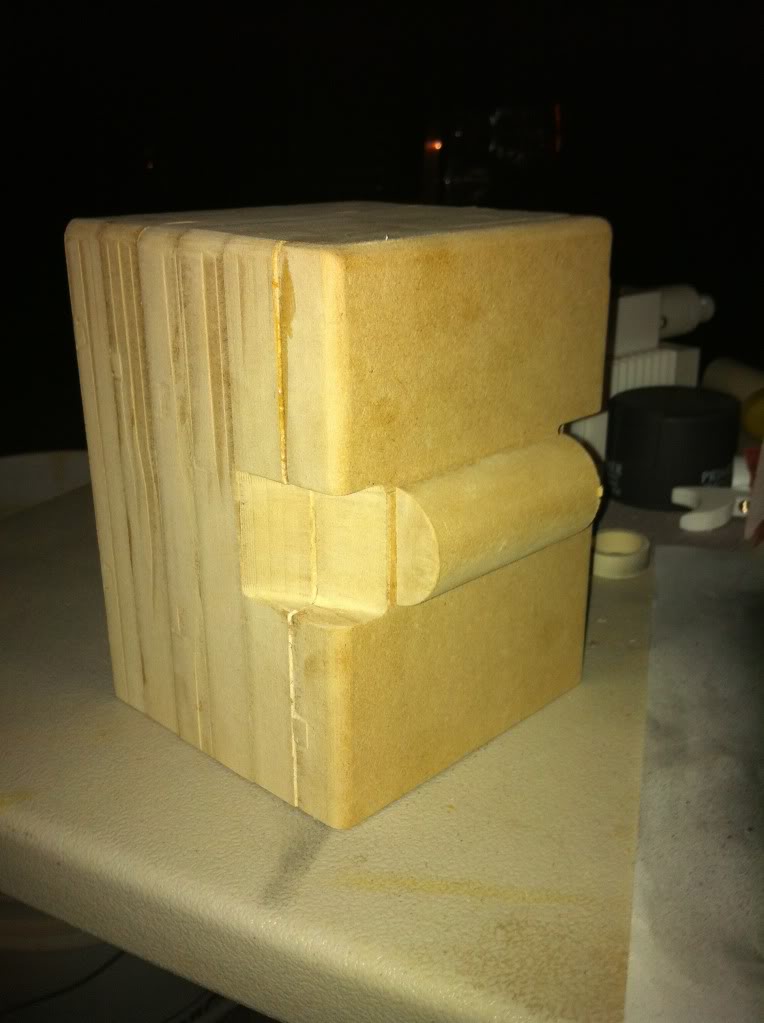 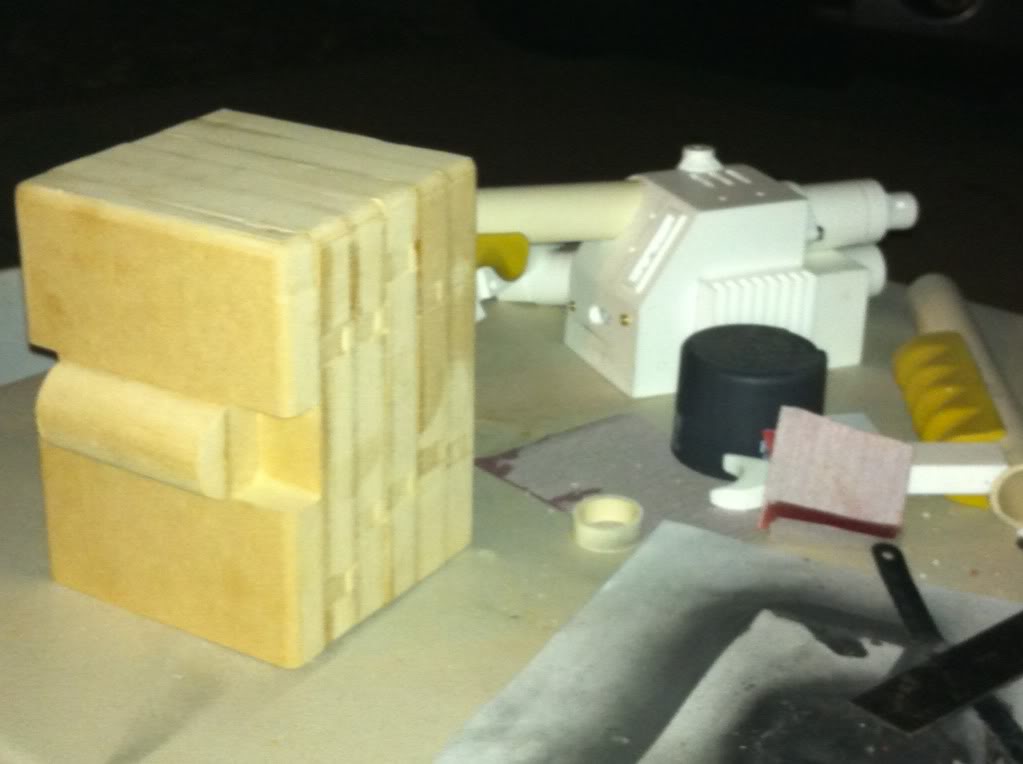 By Troy Rogers -  September 8th, 2012, 9:41 pm
-  September 8th, 2012, 9:41 pm#411414
I can't believe it's been a month, lets see I completely remade the bottom spacer, and the booster & eda box, and then there was the sanding, lots and lots of sanding, until about two days ago when I finally realized that i was going to texture the whole thing so who would know that it wasn't perfectly smooth to start with... oh well its done, and now for your viewing pleasure some before & after shots, sorry I didn't think to take a picture of it all together before I textured & painted, I was on such a roll I didn't even go to the SHSU home opener, that I had planned on going to tonight... 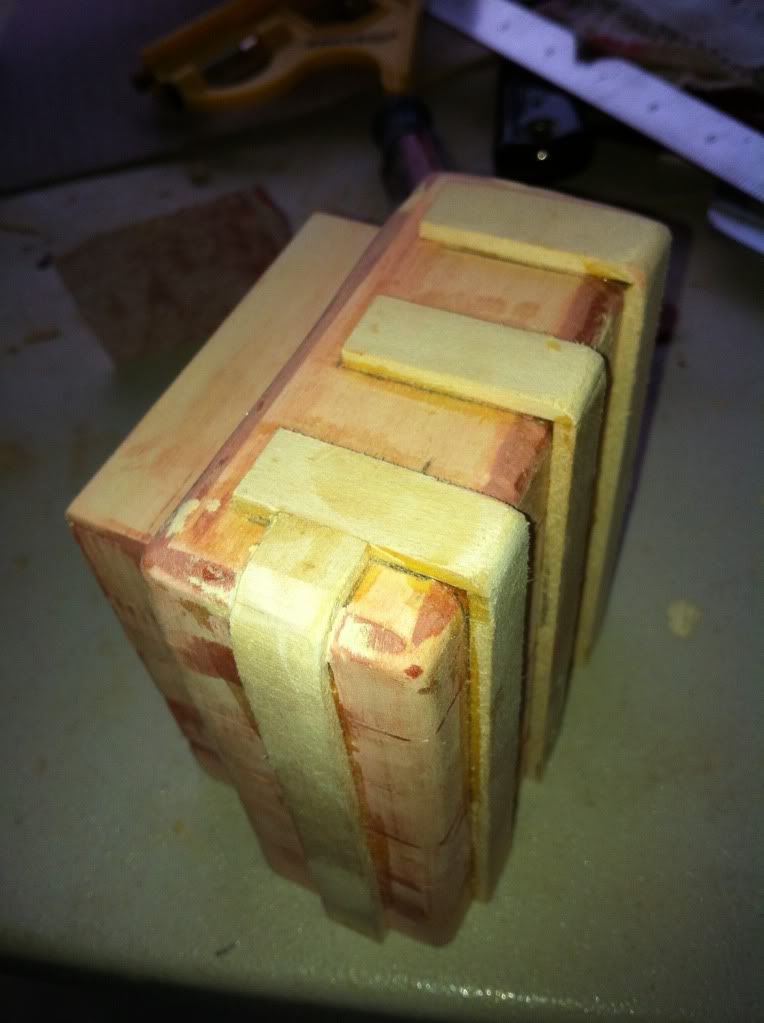 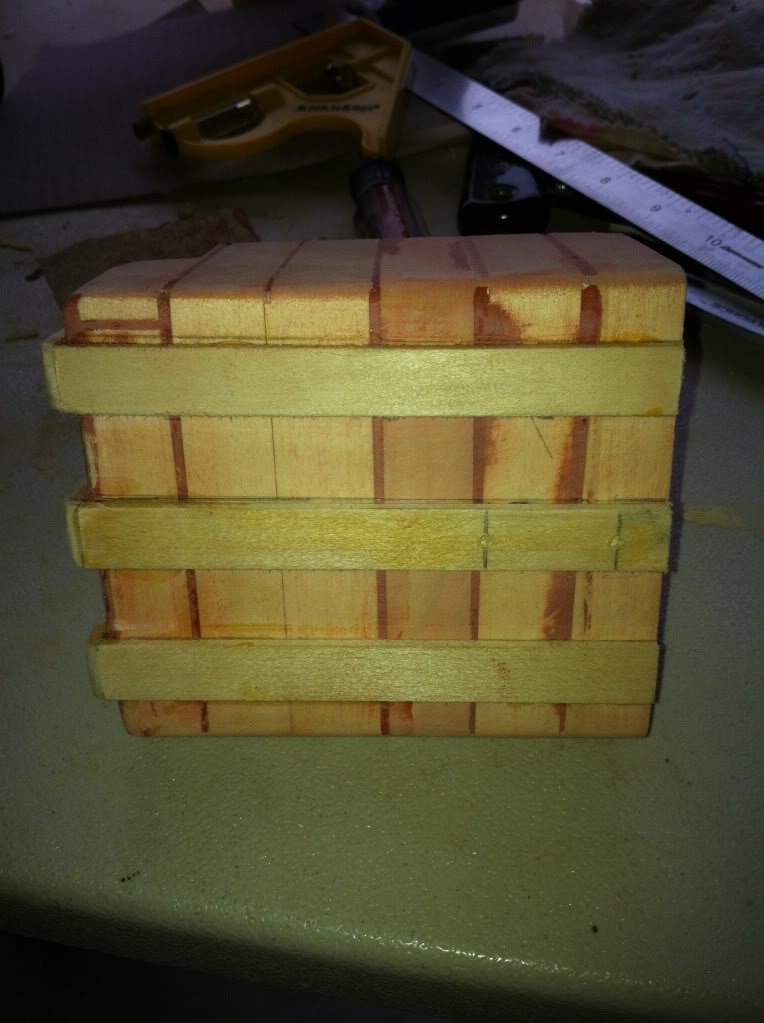 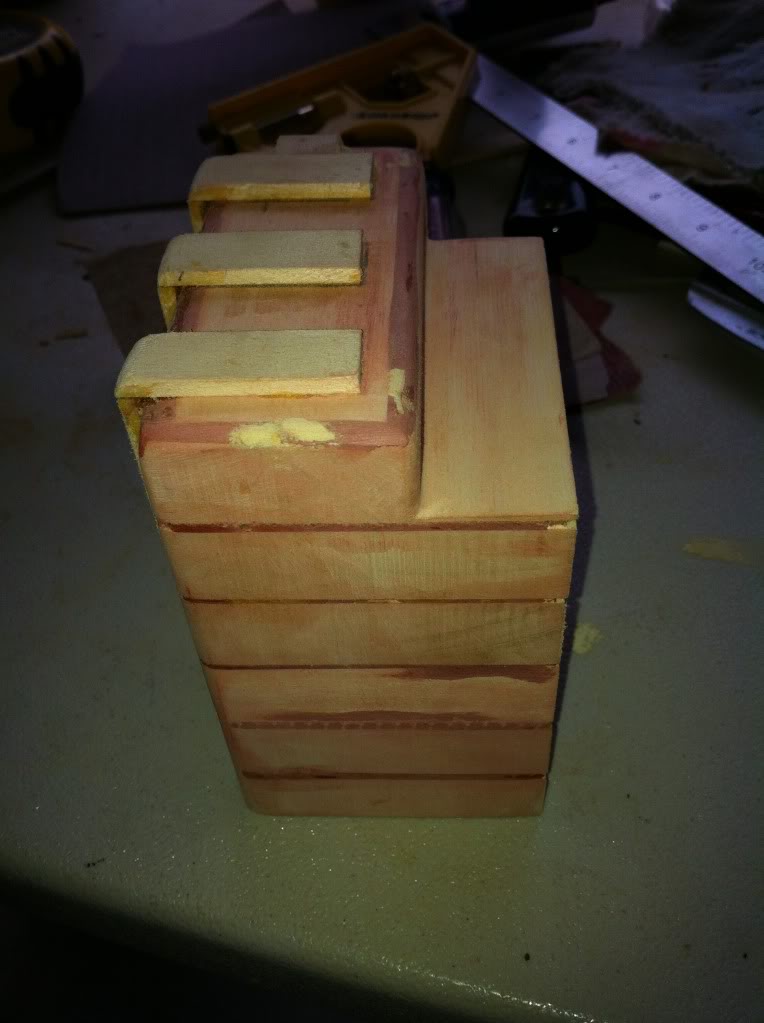 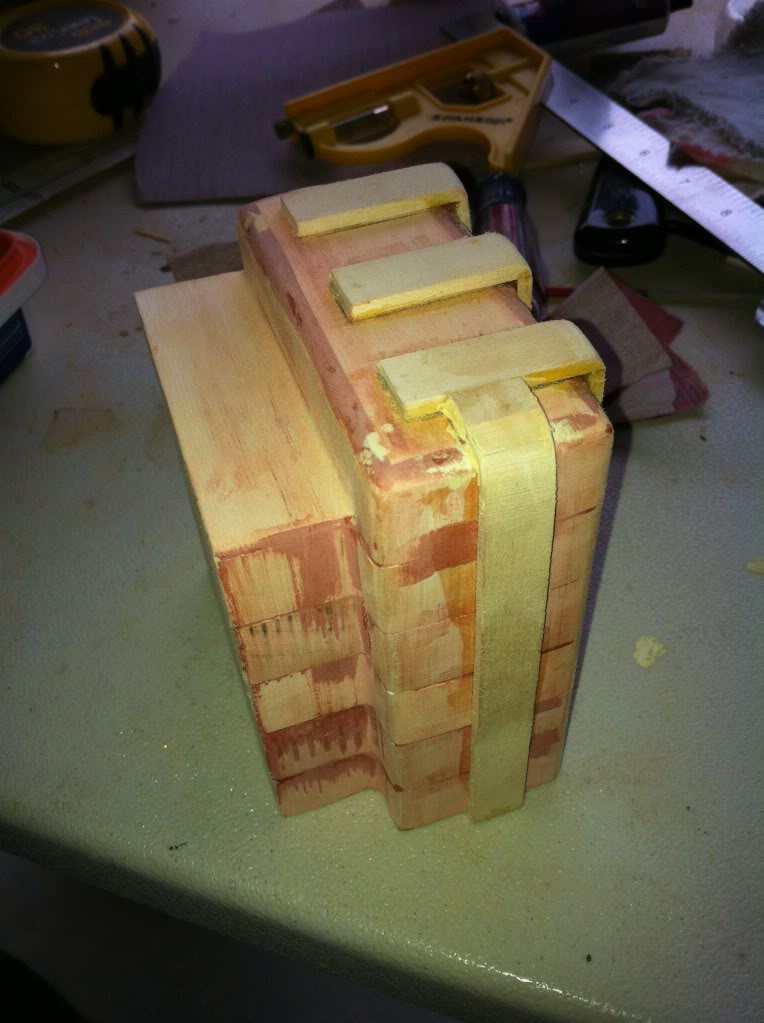 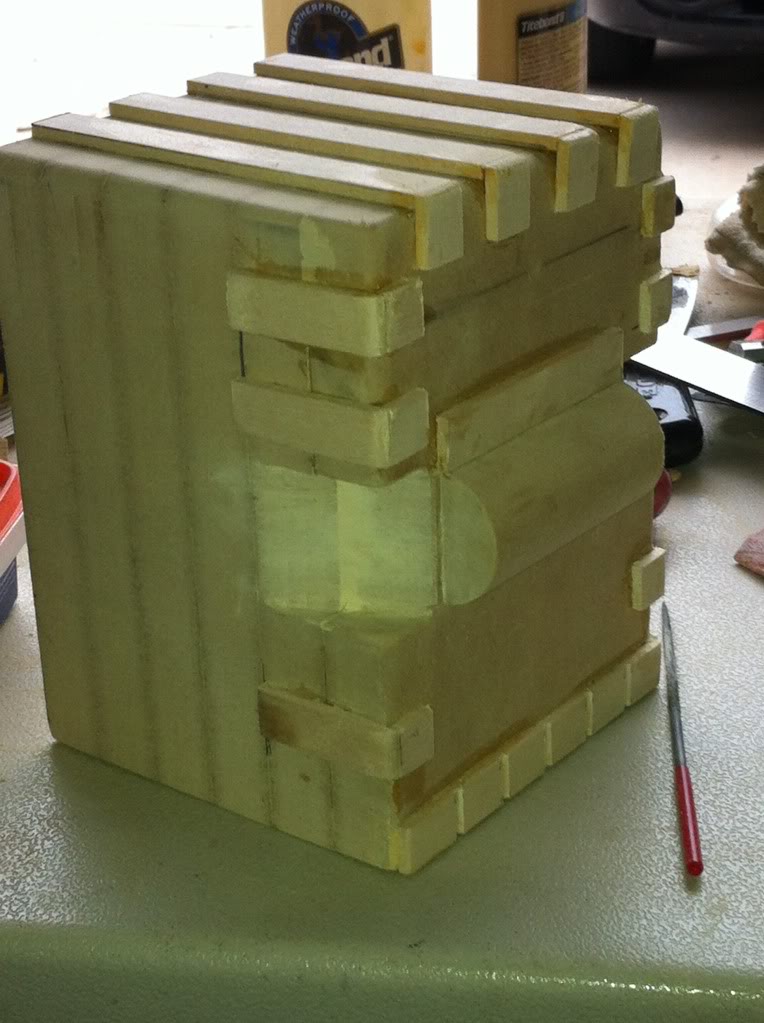 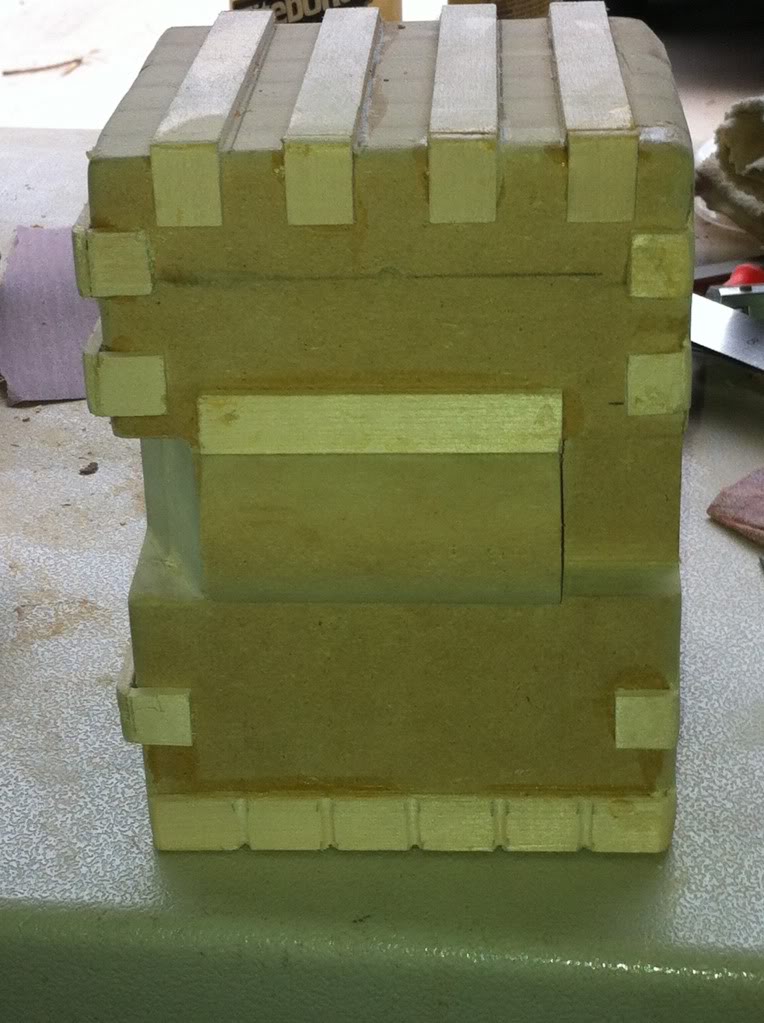 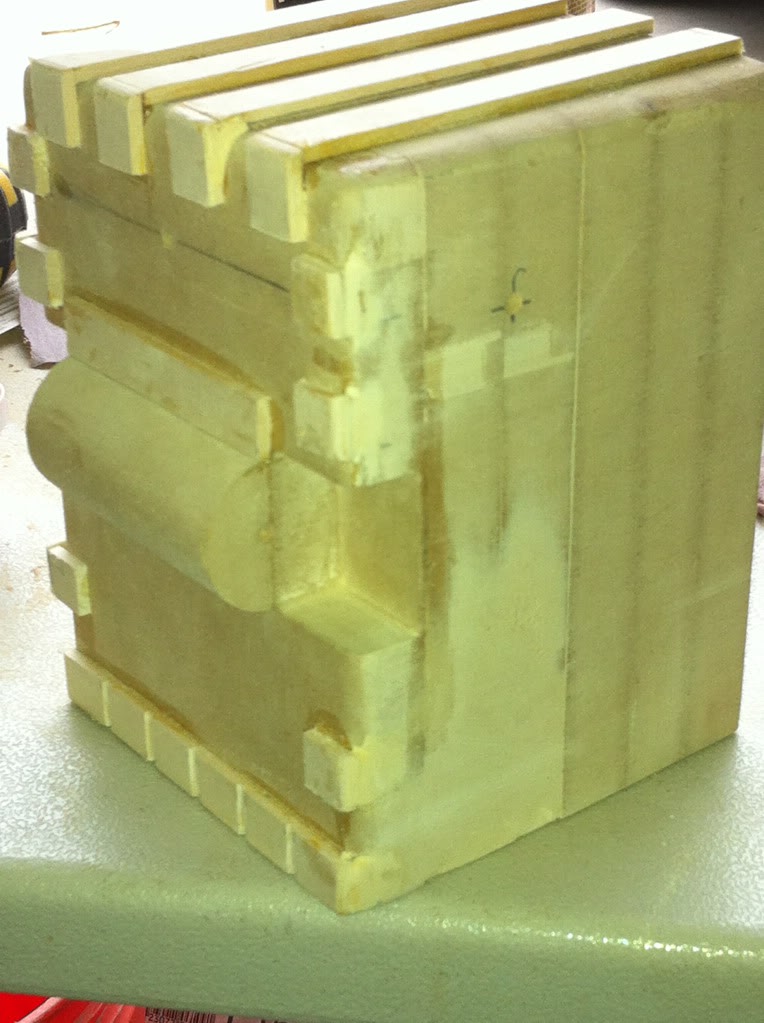 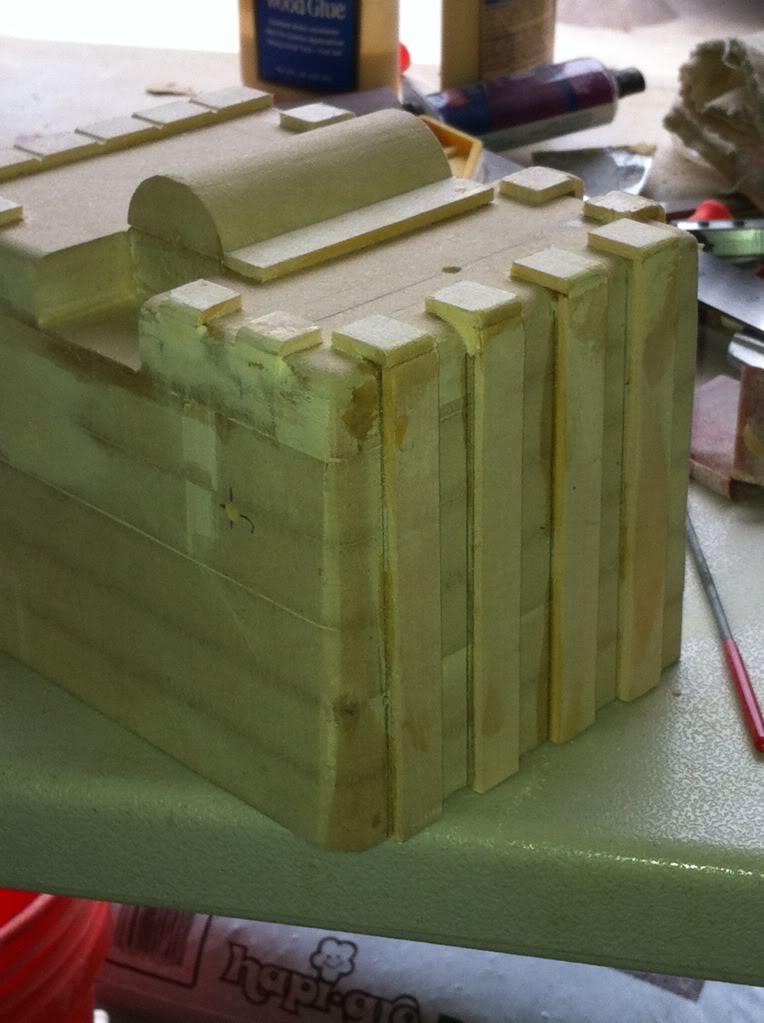 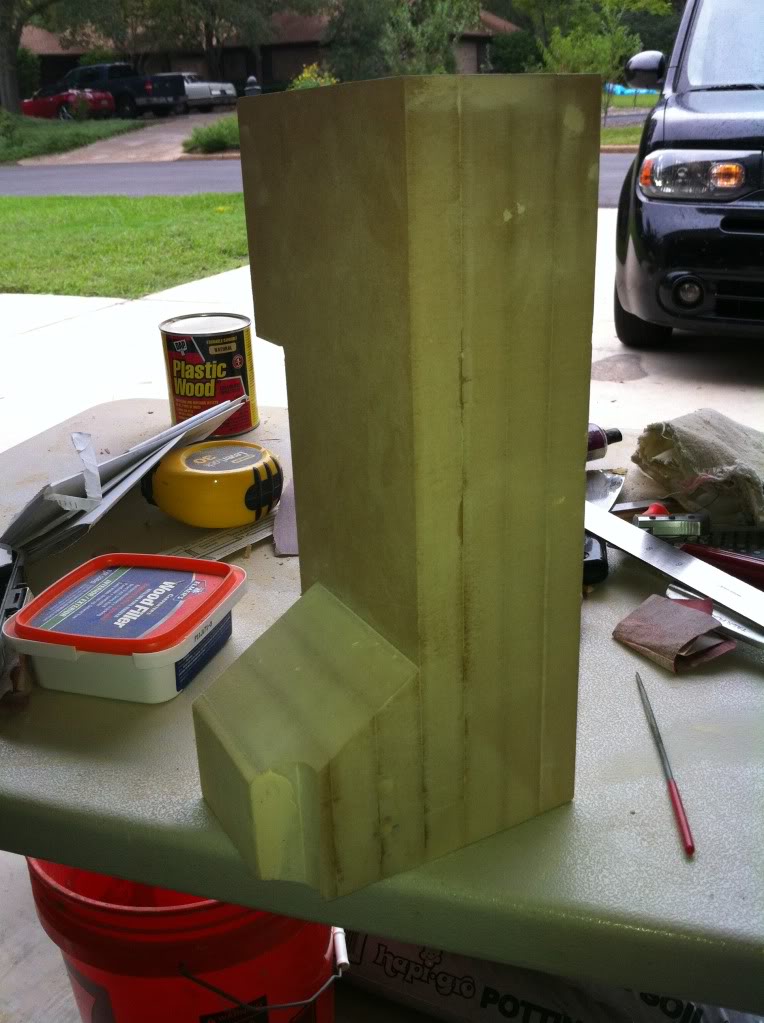 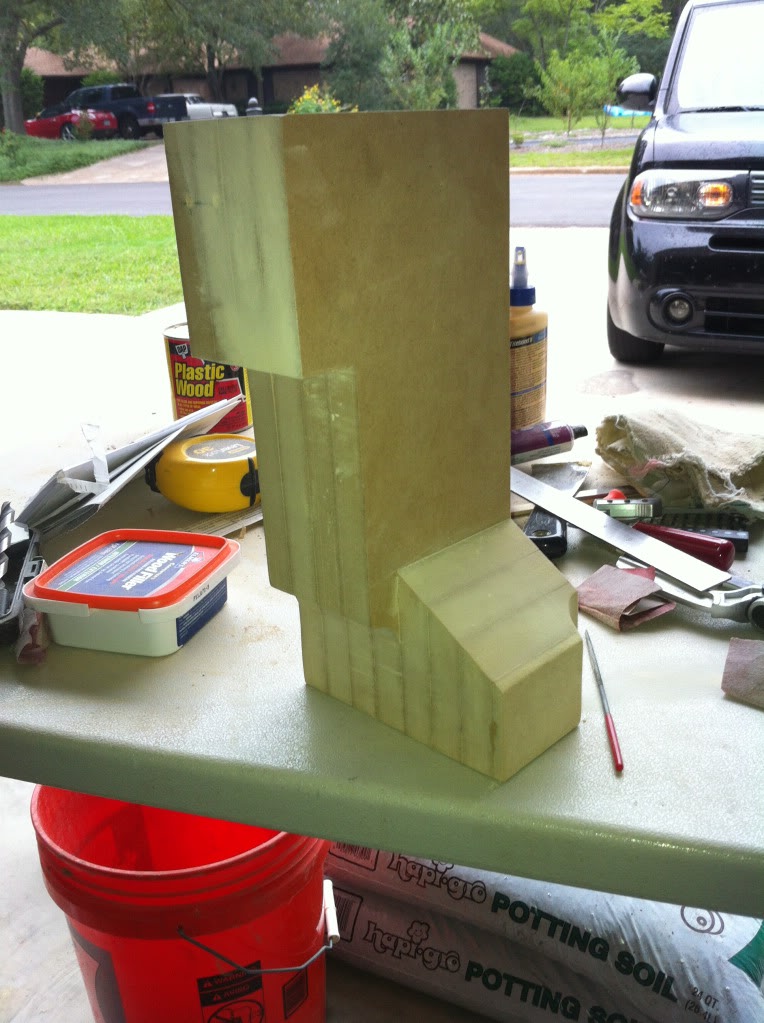 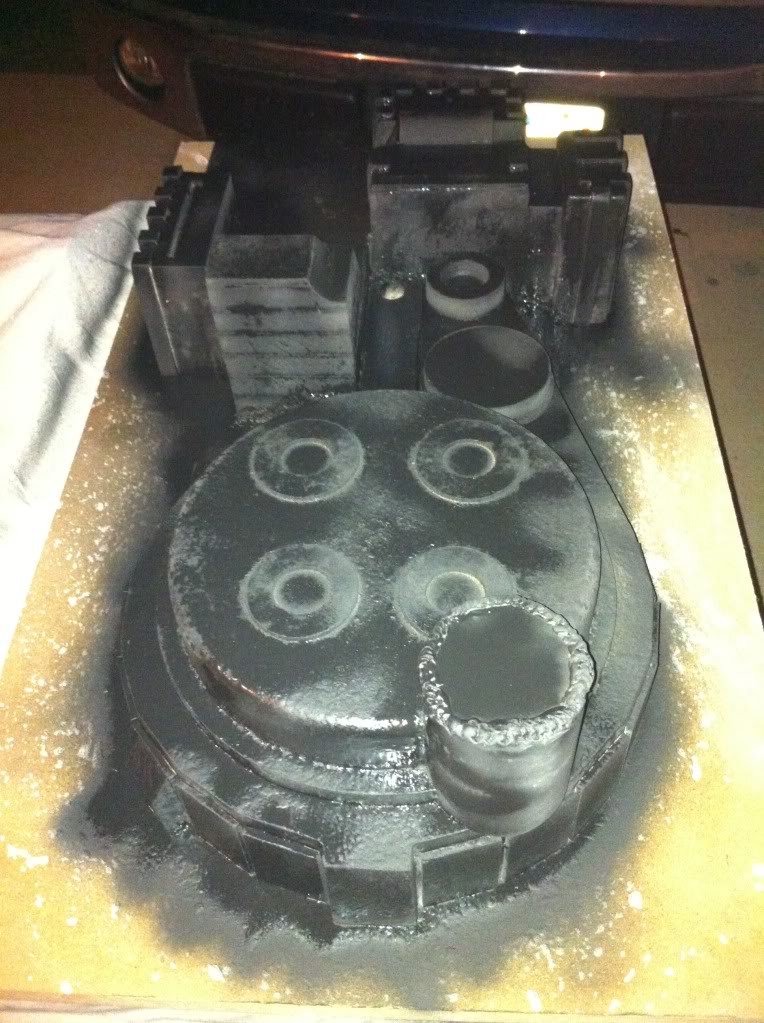 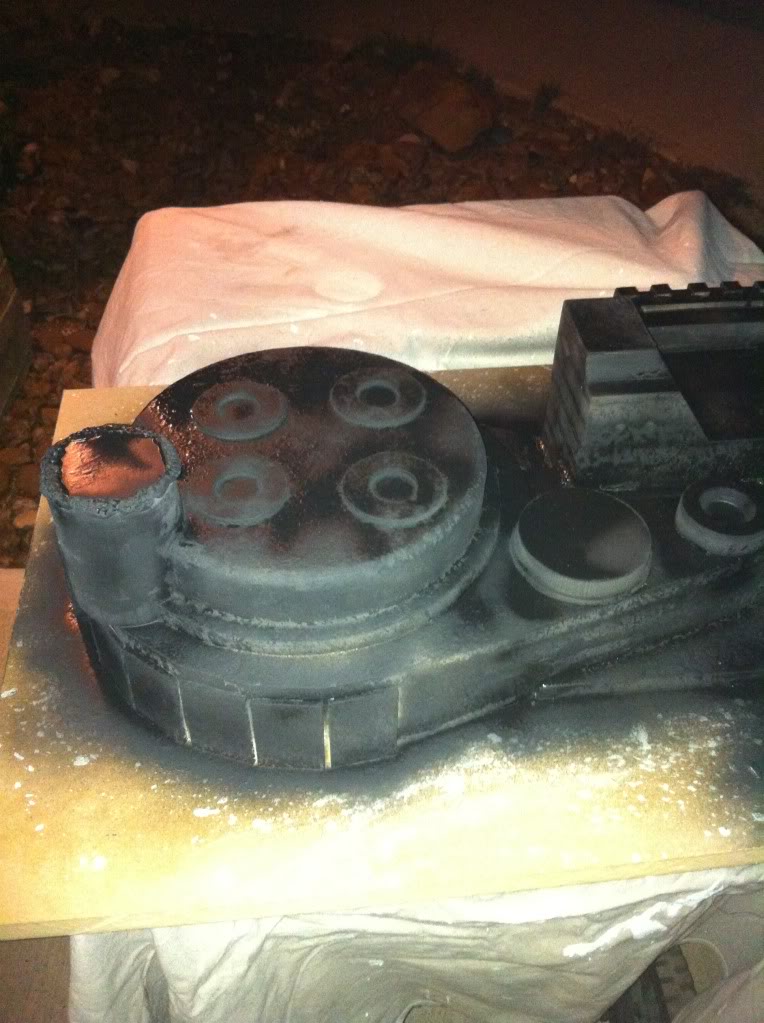 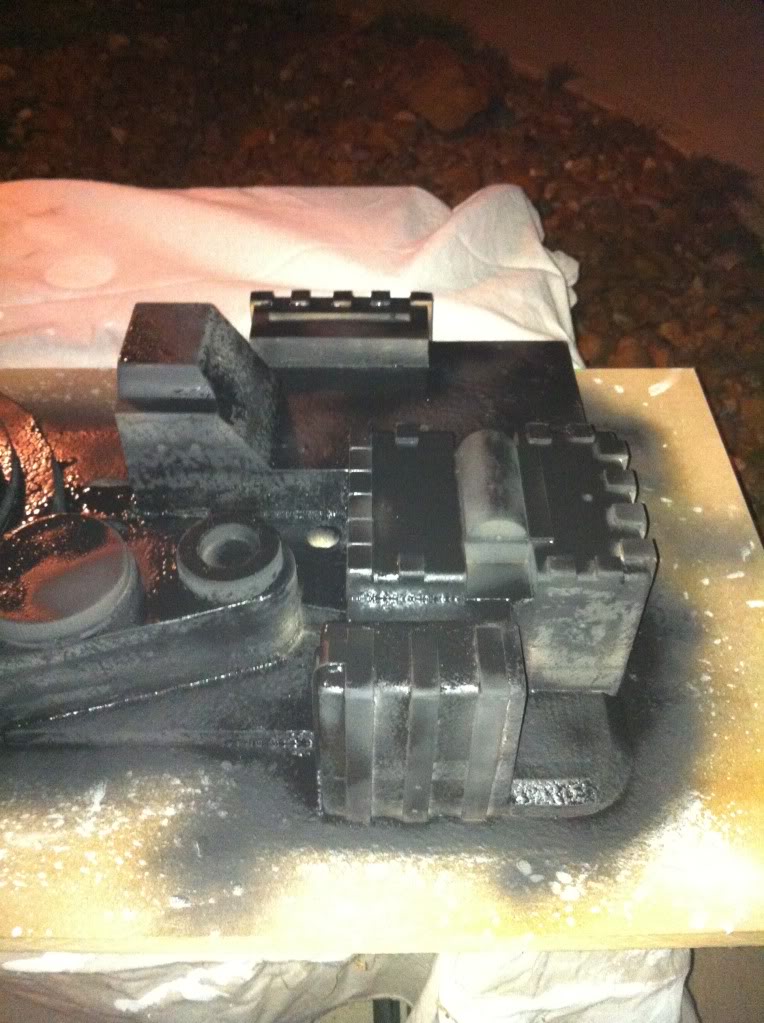 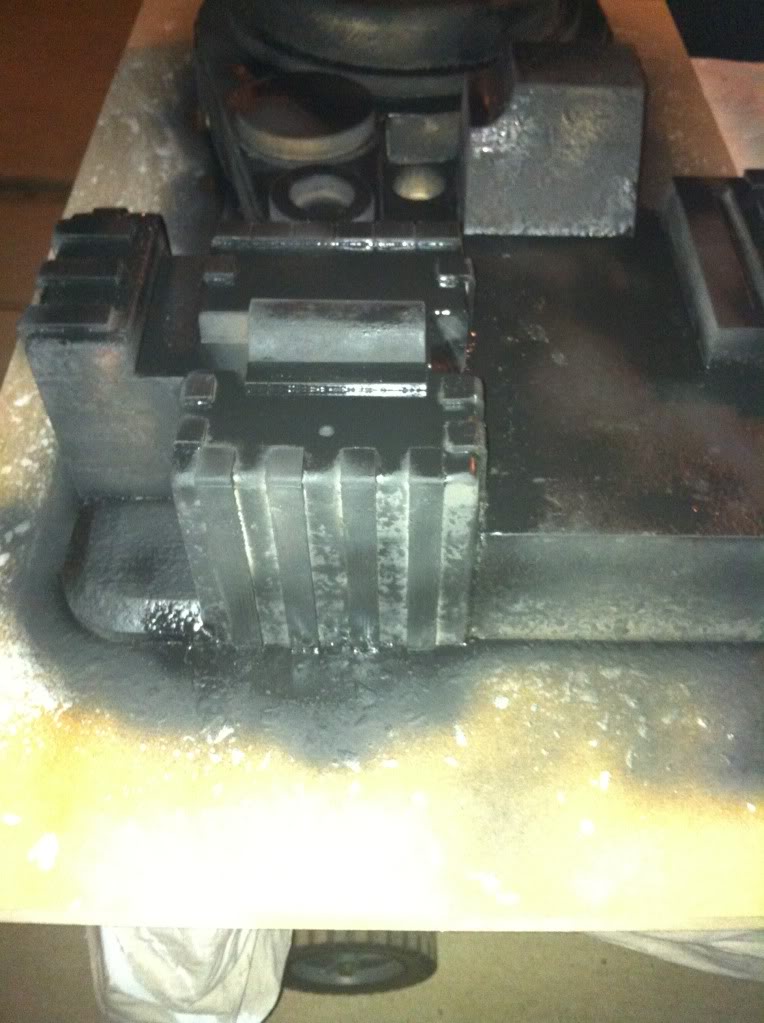 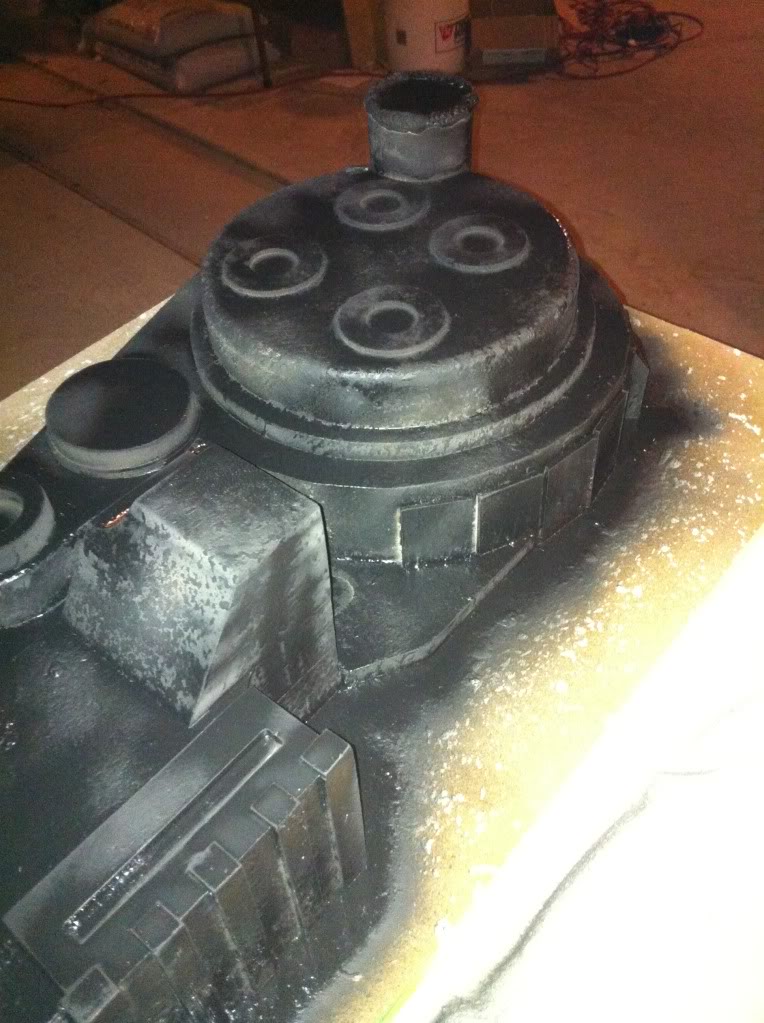 ok so after adding the eda discs I'm planning on molding it in the morning.... especially since it weighs over 40 lbs in its current form

Troy hasn't posted on this forum in 6 years.
Feeling overwhelmed by the Covid-19 pandemic? Please visit The Support Thread.

I have a three Anovos Proton Packs which are actua[…]

https://i.imgur.com/U0qlRit.jpg All the last stu[…]

I think it's the result of a bad colour correcti[…]