The movies that made us! Ghostbusters in season 1 Nov 29

On Netflix there's a trailer. Season 1 is is home alone Ghostbusters die hard and dirty dancing it looks like
Alphagaia liked this

I have been watching the toys that made us with my girlfriend and her son lately and were also hoping for a GB episode! This is cool news though, we will be checking out this new show!

I wanted that too. This should be fun though as a spin off

Anyone notice other inconsistencies or were surprised by some new tidbit?
SSJmole liked this
Mad respect to Paul Feig for tweeting his support of Jason and how excited he is based off the trailer. That's awesome of him. There's a lot of fans who could really learn a thing or two from him. You can dislike his movies, but he's a truly good guy and he behaves way better than a lot of people in this fandom.

I enjoyed it. I also agree with TimsGhost , they definitely teased a toys that made us.

I loved it. I preferred home alone one as that I knew none of what they said same with dirty dancing but Ghostbusters was still great.

Overall I enjoyed the enthusiastic nature of the whole thing and I loved watching Dan and Ivan revisit some old haunts. I think Cleaning Up The Town will be more the deep dive I’m after but this was a good time nonetheless.
NSGhostbusters liked this
Minor UK Indie Celebrity.

I do feel they tell done stories different from the sources how I remember them, like how they picked up Bill from the airport after finding him in India, not France.

Anyone notice other inconsistencies or were surprised by some new tidbit?

That one jumped out at me too.

I liked it. I heard most of it before but I genuinely didn't know Ghostbreakers was used in a few scenes...

It wasn't. See the video link below where I detail why that mis-remembered detail is a problem.


and the misspelling of “Aykroyd” on the mock up script covers, but...

Overall I enjoyed the enthusiastic nature of the whole thing and I loved watching Dan and Ivan revisit some old haunts.

I too enjoyed the scenes where they took them to revisit filming locations.

Good catch on the misspelled name!

I didn't spot the typos of Aykroyd's name, but as I said in my 'Pet Peeves' entry about this episode, I began to tune it out and only watched with half my attention.

I also go into detail about why the 'Ghostbreakers' error felt particularly egregious.

Alex
SSJmole, robbritton, roopjm liked this
What a knockabout of pure fun that was!

I will admit I think a lot here may be different audience to what they are going for with documentaries. I don't mean that negatively either. I mean yourselves are people who have seen more in depth documentaries so thats probably what you want more of. Where as myself I hadn't seen many so genuinely invested watching.

I think what day going with more is the nostalgia factor and been assessable for everyone. Example I love (pre Disney) star wars and watched and read loads on it so they toys star wars wasn't for me but on the flip side i love star trek but don't know much about the merch side so that episode was great to me (sparks police helmet amuses me still)

And I think that's more they're going for more the nostalgia and the casual fans.

But the video was great and I genuinely didn't about the other names , I should as you say it's on Blu-ray and u love the Blu-ray (I wish more did the picture in picture style commentary lol so I learned something from your video or remembered as I probably just forgot lol.

Like I said in previous post the coke and guy leaving who could give them name later was new to me and I agree I'd like more in depth on that personally.

Though have another name in my house lol my 4 year old neice who comes to stay at weekends loves 1 2 + her favourite bis ATC , but she calls them "ghostblisters"

Though this documentary + all other merch now out because of new film I love like just had a nephew born last week .... I got him this

(I can't embed that or the image disappears)

-  December 7th, 2019, 9:15 am #4927795
Whilst like every else here I knew most of the trivia, finding out about Coca-Cola's cheapskatery, and how it ultimately led to Frank Price's depature, which in turn put him in the prime position at Paramount to allow the use of "Ghost Busters/Ghostbusters" after Filmation refused to allow the word's use - were some pretty interesting developments.

I also learned that the live action "Ghost Busters" is even worse than I'd actually imagined.
robbritton, SSJmole, SpaceBallz liked this
What would Ryan do?

I love the creative team behind these series. They even made the Dirty Dancing episode fun and interesting enough to watch.

That was great I didn't know anything about that same with home alone like the fact the pizza guy in that one scene made more money than John candy on that film surprised the hell out of me. I knew most of die hard though but was still fun hearing


One thing thinking about it , William Atherton is there for die hard but they didn't get him for him ghostbusters. Is there a reason? I heard ages ago he hated Ghostbusters but then he opened back up to it for game and Blu-ray. It's weird not asking him about both so I assume there has to be a reason.

edit: there he is 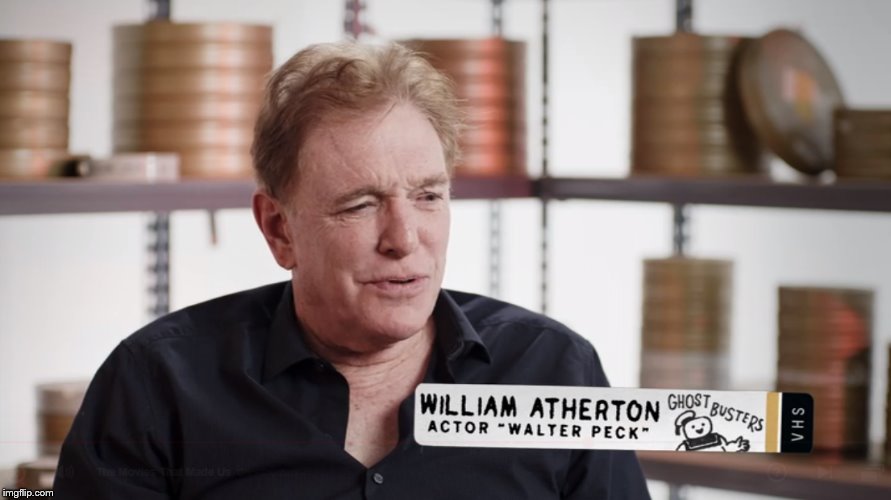 I seem to recall him in the Busters one.

edit: there he is

Huh that's my bad sorry I thought he was just in die hard.

Whilst like every else here I knew most of the trivia, finding out about Coca-Cola's cheapskatery, and how it ultimately led to Frank Price's depature, which in turn put him in the prime position at Paramount to allow the use of "Ghost Busters/Ghostbusters" after Filmation refused to allow the word's use - were some pretty interesting developments.

If anyone could note the timestamp (xx:xx to xx:xx) and/or transcribe the part about Price leaving and allowing Paramount to use the name, I'd appreciate it.
robbritton liked this
Ghostbusters IDW Sales Chart (Updated for January 2020)

Frank’s line in it is: “It was serendipitous that I happened to go there and I was able to say ‘make the deal’! Get... Give ‘em the title!”

The bit where he leaves happens earlier in the show at around 25:50.
Last edited by robbritton on December 9th, 2019, 4:51 am, edited 1 time in total.
mrmichaelt liked this
Minor UK Indie Celebrity.

Frank’s line in it is: “It was serendipitous that I happened to go there and I was able to say ‘make the deal’! Get... Give ‘em the title!”

The bit where he leaves happens earlier in the show at around 25:50.

That's all I was looking for. Big thanks, robbritton.
robbritton liked this
Ghostbusters IDW Sales Chart (Updated for January 2020)

Jason's going for nalstogic. Can't get any more […]

I dreamed last night that the mini stay pufts were[…]

Appreciate you finding those, I had seen them alre[…]