Ghostbusters II items to be auctioned at Profiles in History

Ghostbusters II items to be auctioned at Profiles in History#4927793 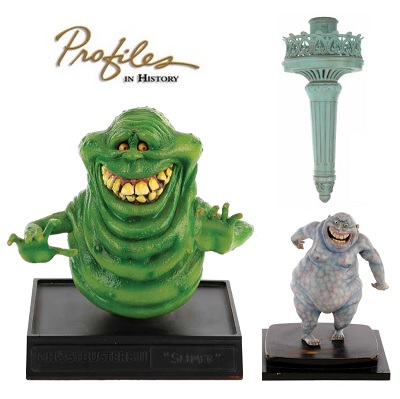 The catelogue for Profiles In History's Hollywood: A Collector’s Ransom auction has gone online, and amongst the collection of movie memorabelia, items from Ghostbusters II are set to go under the hammer.

Visit the topic to view the full the full list of auction lots. Special thanks to Coover5 for the head's up.
What would Ryan do?

Re: Ghostbusters II items to be auctioned at Profiles in History#4927794

1324. "Ghostbusters II" screen used Statue of Liberty torch. (Columbia, 1989)
Original filming miniature of the iconic torch. Constructed of cast resin components expertly assembled and painted in greened copper tones with detailed antiquing and distressing to precisely match thepatina of the actual landmark statue. Measuring 15 in. long x 7 in. wide. From the unforgettable scene when the Statue of Liberty becomes animated. Exhibiting some wear and age. In fine condition. Originally from the collection of a former ILM emplyee.
$1,000- $1,500
What would Ryan do?

Appreciated but I have tried printing off scanned […]

You may have to rehost the image at imgur or flick[…]

Another day another minor update. I threw togeth[…]

Generally positive reaction from everyone I have c[…]