By HandSolo -  August 25th, 2019, 12:47 pm
-  August 25th, 2019, 12:47 pm#4923165
So I looked through the Forum and other resources, but I could not find the exact cause of the T. U. Antenna AKA sniffer changing from a gray box to a red box. In the movie it was Gray, and when they refurbished the car for the video game they put a red box on. Was the simplification of paint in the cartoons to blame? Or, was there a more important reason? It was replaced by the buoy in Ghostbusters 2, unless it was in that scene at the beginning when they went to the birthday party. Does anybody know for sure?

By HandSolo -  August 25th, 2019, 3:54 pm
-  August 25th, 2019, 3:54 pm#4923179
That seems to be correct however, in "Ecto 1 resurrecting the classic car" on YouTube, at the 4:31 mark, they are using reference images that has an all red sniffer. It does not appear to be from the video game. It appears to be real photographs. Where are these photographs from? I wonder if it was a fan remake that they were then referencing? The in game car may have actually been based on the refurbished one. Maybe they finalized the cutscenes before the refurbishment was done but they made changes to the in-game graphics. And if they did change it in the game, why?

By Kingpin -  August 25th, 2019, 6:20 pm
-  August 25th, 2019, 6:20 pm#4923187
I think the sniffer box changing colour happened during the "spitshine" restoration in the early 2000s. Back then a lot of cheap fixes were made to Ecto-1, including spray-painting some of the chrome elements (it was during this restoration that the white shaft which held the red and white dome and motor assembly on the "A/C unit" were also painted black).

I suspect what happened is that someone assumed the whole sniffer was red, based on how it looked after years of deterioration in the California sun: 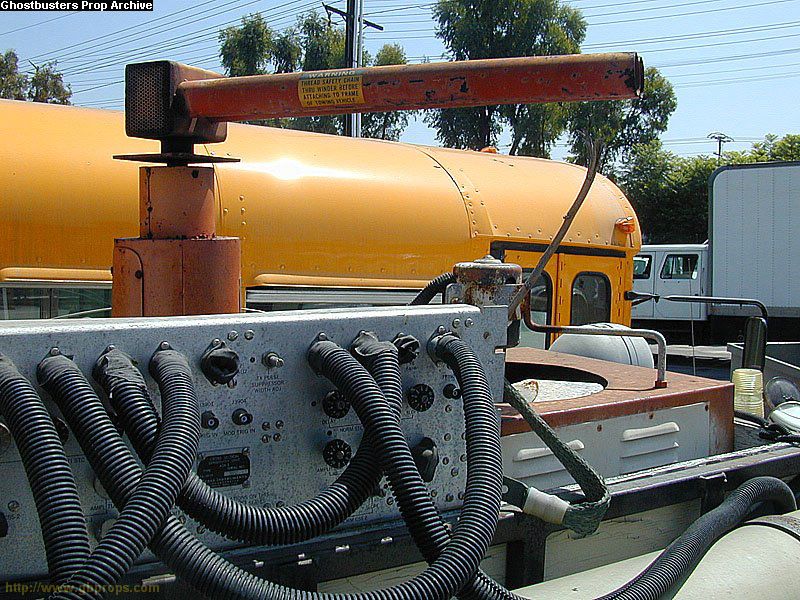 When the second restoration came around in 2009, a lot of the incorrectly painted elements were assumed to be how they had originally been, and were copied over when the car was refurbished. Here's Ecto-1's roof rack before it had been fixed up: 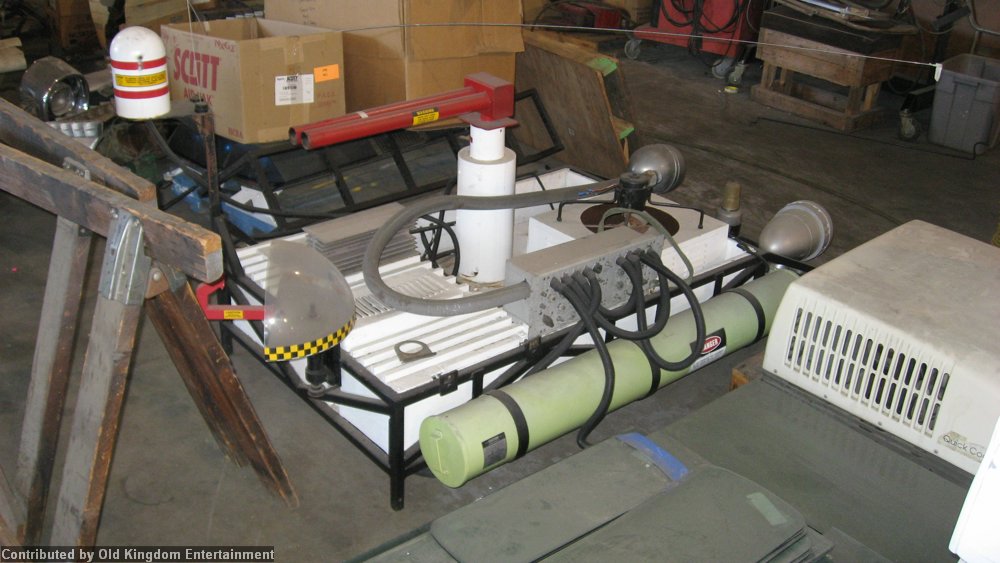 It's frustrating that despite the fact Ecto-1 was on the receiving end of a decent restoration effort, pretty obvious mistakes were made or kept.
jpetrutis81, robbritton, groschopf liked this
Feeling overwhelmed by the Covid-19 pandemic? Please visit The Support Thread. 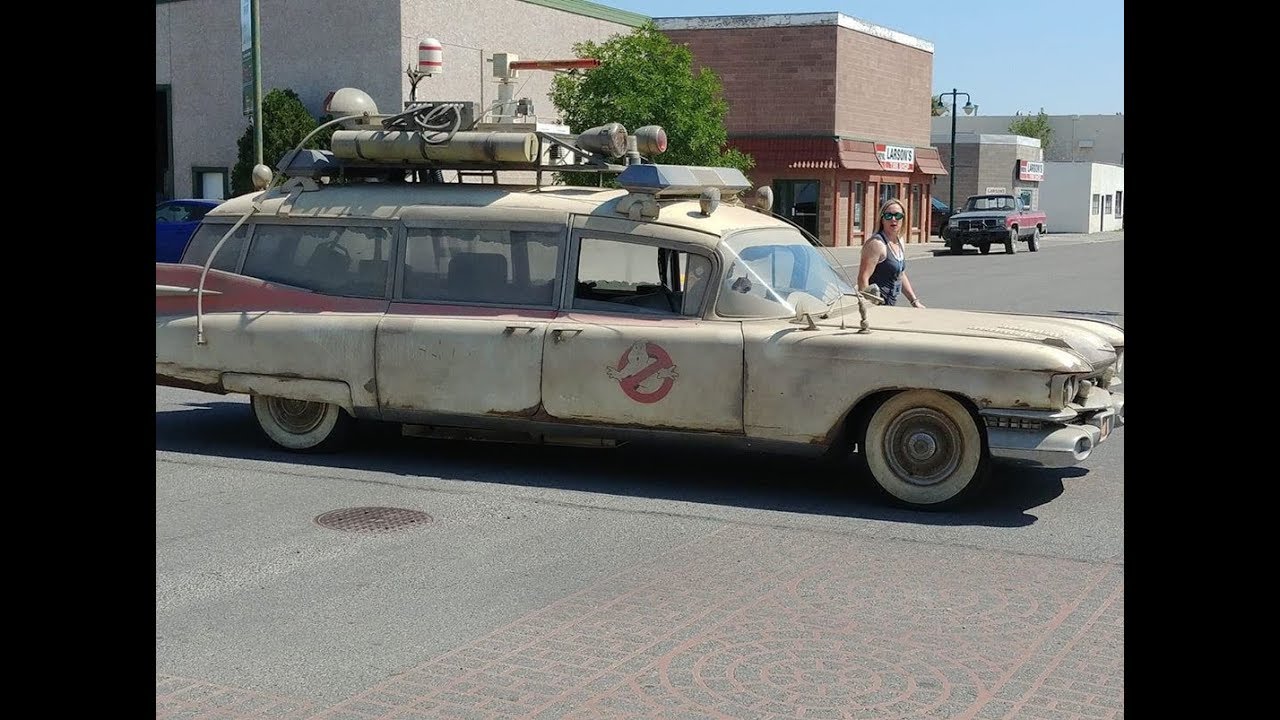 I suspect it was a stylistic nod to the ubiquitous illustration of the Ectomobile used in books, stickers and various products back in the '80s: 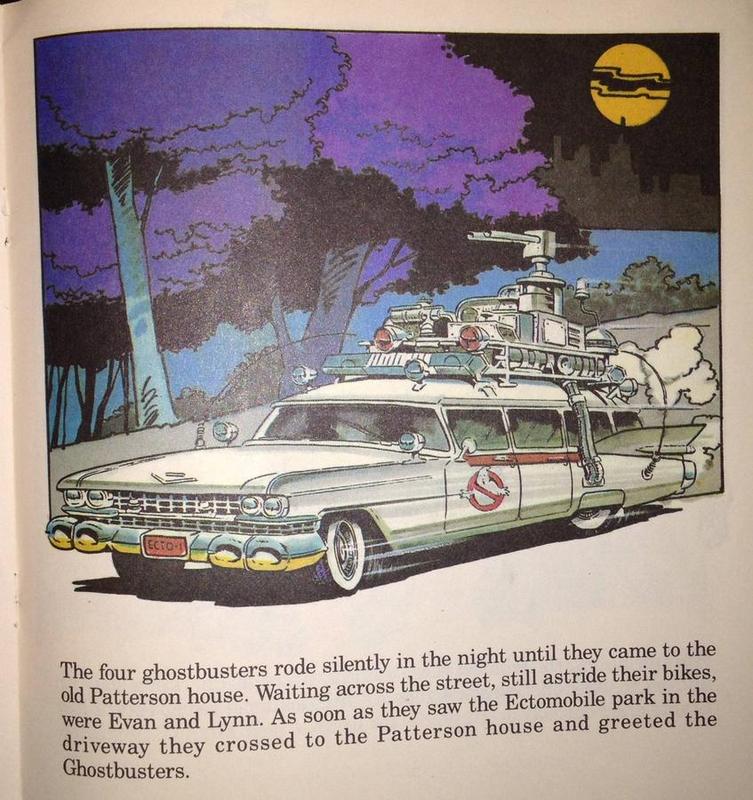 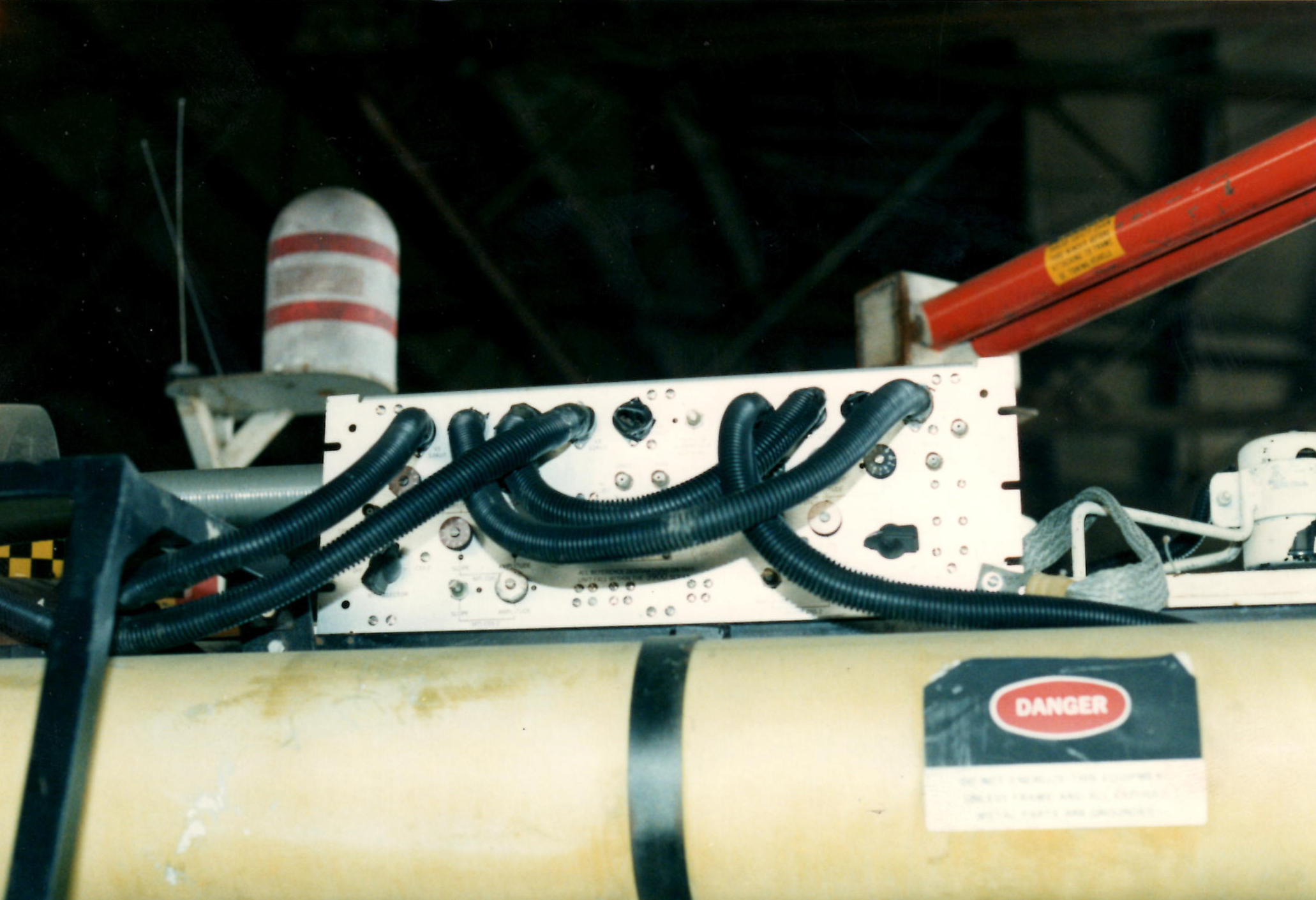 Now this next bit of history is weird. I don't know the order in which this happened for sure but I just know that it did. This is just what I think happened.
Either before or during production of Ghostbusters II, the car saw a few changes. There are two theories on this next part. Some say that shots of the Ecto-1 in the second film were shot early on before the Ecto-1A came into being. The Ecto-1 saw a very brief refresh where the sniffer was painted completely red and GBII logos were adhered to the car doors. However, if you were to go off the age of the rings on the raydome, one could surmise that this isn't the case. Also, the sniffer was never painted red. It just rusted out like the fanbox. It's also rumored that the Ecto-1 received a donor door from the Ecto-1A during its second restoration. That could be true but I don't know what to make of their being a GBII logo on the doors, when this is still pre-first restoration? The car received its first restoration. This is where lots of little changes happened to the car with labels and paint schemes. This is where new labels appeared on the sniffer body, which was converted back to white but leaving the top box part red (should be white). Then the car sat again for several more years until it got its (somewhat) full restoration which is how the car remains today. Also to mention, the car does get routine upgrades. Notice the major rust on the bumper? This was after the major restoration. A year later and that rust was gone (sadly I can't say the same for the wood on the roof rack which is falling apart due to moisture and rain). When Sony does these upgrades, they do them on the cheap. I was out at Sony a few weeks before FanFest and they had maintenance repainting the 2016 Ecto with red spray paint. The red had sun faded so bad that it was almost a salmon color. Last time I saw the Ecto-1, there were bars of Irish Spring Soap all inside of the car to possibly mask the moldy smell the car can get. I guess that's a brief history of the Ecto-1 and its refreshes/restorations. 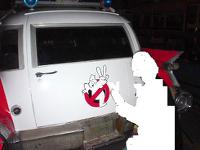 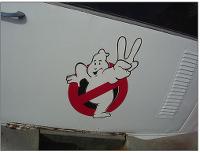 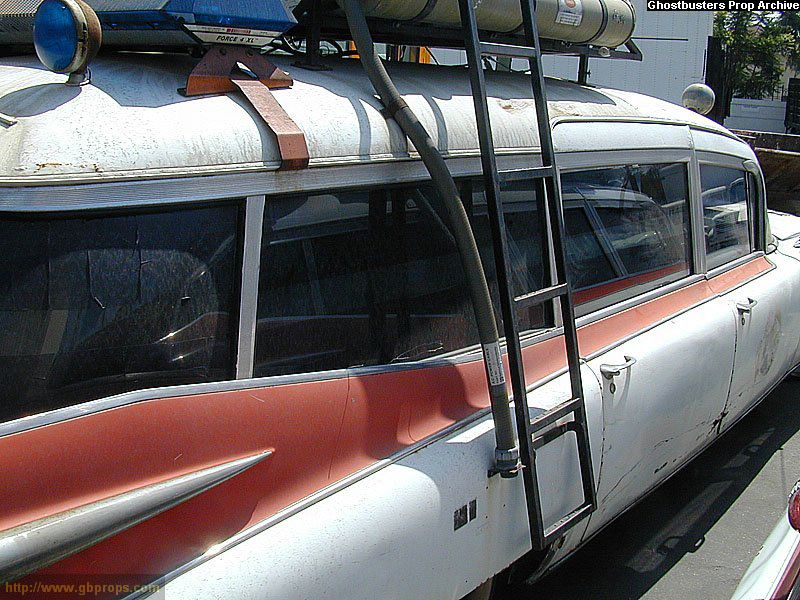 It seems at some point after Sony finally gave Ecto-1 a reprieve and pulled her out of lying in direct sunlight, they (or someone acting under their own steam) slapped some fresh GBII decals onto the car. Whether this was for some private event that the car was briefly brought out for is anyone's guess.
Feeling overwhelmed by the Covid-19 pandemic? Please visit The Support Thread.

Kingpin wrote: ↑December 11th, 2019, 12:21 pm The photo of the driver's side door that you posted shows (via the deterioration of the white doom's red stripe detailing) the car at some period after the gallery of reference photos here was taken. Here's a shot of the front-passenger door from the gallery, showing the logo-less front-passenger door:

Yeah, I knew it happened but can't figure out the order in which it did happen. Details somewhat overlap in the history of it all. Plus, that last photo is great but I just wished it was higher resolution. Last year, I redesigned all of the labels inside and outside of the car (as seen in the film) and there are still two labels I can't make out what they say. One of which is the grey liquidtite hose label. That bottom, bold line is a mystery to me. 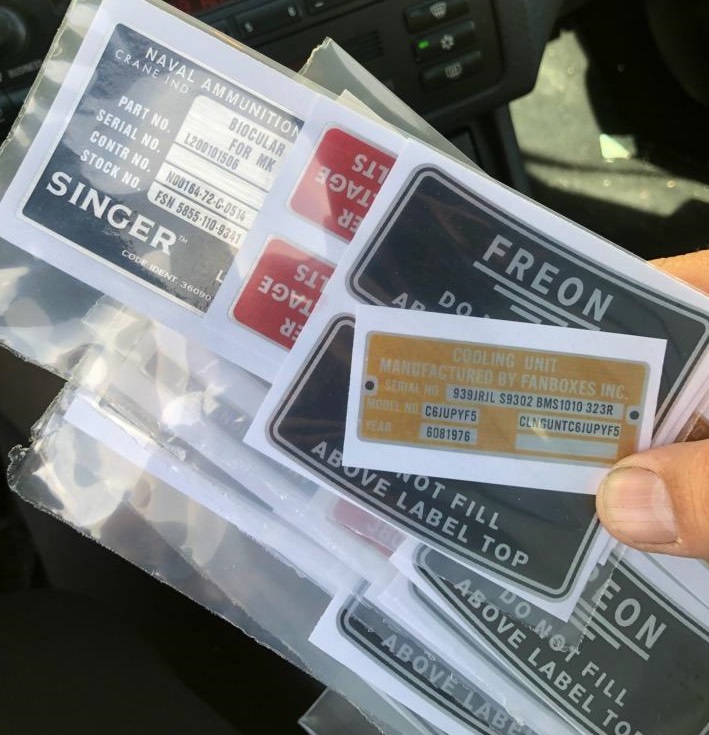 That's the ghost of Atari's Berzerk.
SSJmole liked this

I'll talk a moment about the Neutrik connector for[…]