The one where they mention the mini pufts?

Sony had the video taken down. It's legit.

Uh-oh. The mini Pufts weren't supposed to be common knowledge yet.

The interviewer even gave that vendor an out of not being able to discuss it.

It's a good sign that people are so eager to share what they know, but I also see the studio's point of view about containing leaks ever since they got hacked.
deadderek liked this

I guess I'm just bored of there always being a cult or sect secretly working behind the scenes in shows/movies/books of late, and find the idea of an extinct cult far more interesting.

If I see an ancient cave painting in the mine of 4 stick figures with proton packs and/or some "prophecy" in Tobin's spirit guide about the GBs I'm gonna throw my soda at the screen.
Corey91, Sav C, groschopf and 2 others liked this
co-worker: hey the going away party is in the back
me (with new mullet): oh i know where the party is

I understand they want to keep them under wraps, but they have nothing to fear from the fanbase reaction at this point - it's another solid gold idea. Muncher's design is 10/10 and looks like classic Ghostbusters.

Everything we have seen re-assures me the Reitmans have got this. They're going to over-deliver massively on most people's expectations. 4 months guys...

Sav C, groschopf, Corey91 and 2 others liked this

Everything we have seen re-assures me the Reitmans have got this. They're going to over-deliver massively on most people's expectations. 4 months guys...

Definitely. Everything I've seen has made me think that this is gonna be a good one! Can't believe that GBIII is literally only four months away...
deadderek liked this

) because imagine the situation. The family comes to the town, they don't know who they are, they don't know about the town and maybe everybody's perfect friendly but sundays, they all go to the hidden gozerian church or something and the kids and Callie & Groob don't know, a little bit like Rosemary's Baby.
groschopf liked this
http://www.ghostbusters-germany.com

I really thought I was going to be able to buy all the GB merchandise coming this year but I can't even put a dent into what Hasbro is selling. Hasbro items alone will cost someone $640 to get it all. I'm sorry that I'm going to miss out on a lot this year but still excited to see what else is coming.

I drew the line at the Kenner classic figures, the plasma series gi joe style figures are awesome. But they're beyond my budget.

I have tried finding the packaging for the Ecto-1 playset but can't seem to find photos anywhere. I imagine they are hiding something. What do you guys think? Might the package itself or the Afterlife upgrades contain spoilers for the movie? I know a few of you think the Ecto could be eaten. Think there might be some "bitten" pieces to swap out on the Ecto playset?
Last edited by Coover5 on February 28th, 2020, 3:43 pm, edited 1 time in total.

I personally am all in favor of the cult still being active, and having been active in the run-up to the Crossrip. I mean, there had to be a catalyst to the events of '84, right?

And even though I think they won't go this route (especially because it would negate some outstanding character development on Erik Burnham's part), it's still fun to think Walter Peck could have been a Shandor Cult proxy. It also ensures a character at the end of the the first film walks away with a piece of the deity the cult worships, given the marshmallow dump at the end. And hell... wouldn't the EPA be involved in a clean-up of potentially toxic materials like nuked marshmallow sludge? Couldn't those same shadowy cult forces be what resulted in the Ghostbusters getting sued out of existence by the second film?

I think the cult is and has been underground for some time. Something hiding under the surface could be a theme of this film, given the mining metaphors -- outwardly-upright people engaging in nefarious behavior just out of sight.

Even Egon might have been undercover, in a fashion. Wouldn't do to advertise the presence of organization that took their deity down. Having Oliver Cooper sporting a beard and farmer's apparel would be a good way to show Egon in a flashback investigating the town.

As people have pointed out, the symbolism isn't just present in the old building architecture, it's front and center in modern imagery used by the town. I think they're at least dormant, if not still up and running. Oklahoma should have been as far as they could get from the prying eyes of the only professional paranormal investigators and eliminators in existence, but obviously wasn't far enough.

I said it before but The Video Game did subtly introduce those who handle Ivo's estate and remaining holdings, the Shandor Foundation, who were loaned the pieces for the Gozer exhibit in the first place. Would love to see that revisited but odds are are nil, imo.

I guess I'm just bored of there always being a cult or sect secretly working behind the scenes in shows/movies/books of late, and find the idea of an extinct cult far more interesting.

It's clear to me now that Kingpin is a member and is trying to spread disinformation.

I was excited for the Plasma figures until I saw only Winston comes with the stream effect. I WILL be getting the new thrower though! That looks awesome and I can't wait for someone to hack it into the GBFans soundboard

This is 100% the reason I pre-ordered it! I'm currently starting to collect all the pieces for my first pack build!

Is this some kind of metric page to imperial conversion?
Kingpin liked this 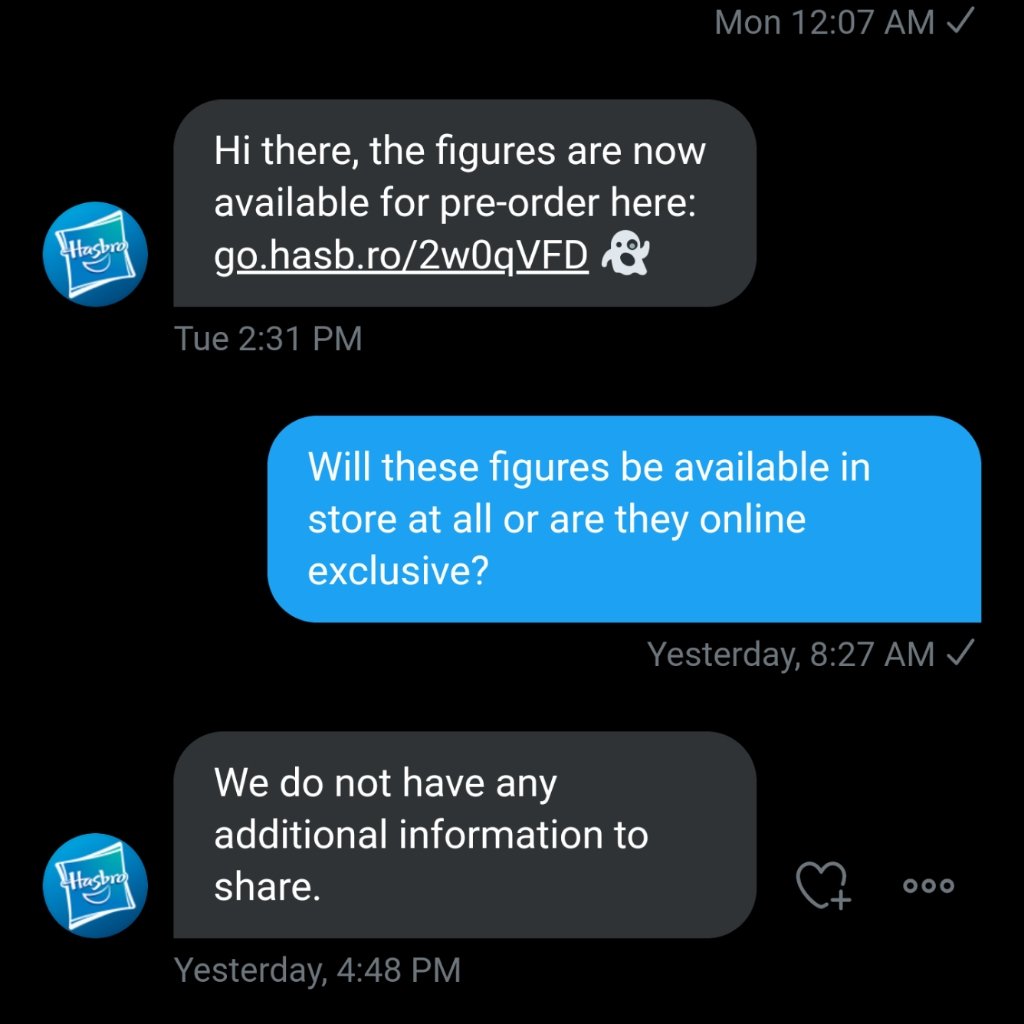 Bit of an odd response for an easy and straight forward question like that.
Last edited by deadderek on February 28th, 2020, 11:15 pm, edited 1 time in total.
Sav C liked this
"Ok. opening at number 2, to sub 50 million, next to the 2nd weekend of an animated kids movie, is NEGATIVE. Let me just clear that up right now. There is no middle ground on this. Studios DO NOT spend 100 million in marketing money to open at number 2. No sir. No. No. No. No." - Richardless

Sav C liked this
"Ok. opening at number 2, to sub 50 million, next to the 2nd weekend of an animated kids movie, is NEGATIVE. Let me just clear that up right now. There is no middle ground on this. Studios DO NOT spend 100 million in marketing money to open at number 2. No sir. No. No. No. No." - Richardless

I’m getting Spengler’s Neutrona Wand and the RGB figures. They’re preorders, which means they haven’t charged my card yet...which means I haven’t told my wife yet.

Haha, this is relatable.

I only ordered 2x of the Kenner figures: Egon and Ray. I think they're the best and I needed to limit myself. I can't justify the full set because I ordered the $600 Chronicle figures (currently MIA). That caused quite the conversation with my wife.

I wasn't going to buy any more Ghostbusters stuff after that... but... I had to pre-order that neutrona wand for the price - and I have my eye on some of the other Hasbro stuff later this year. I keep telling myself this is a blip year because of the movie, so make the most of it...
Last edited by Chicken, He Clucked on February 29th, 2020, 4:50 am, edited 1 time in total.

Are we close to building a time machine so we can […]

Without the VHS effects: 7qSkgHQaJAo This s[…]

What kind of paint did you use on the legris? It l[…]