Peter H. Aykroyd, father of Dan, has passed away 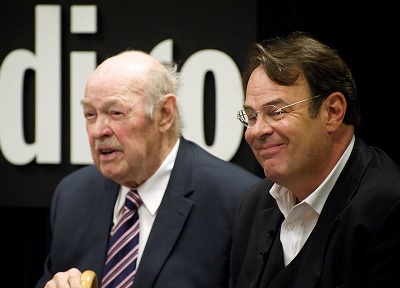 It is with great sadness that we report the passing of author Peter Hugh Aykroyd, father of Ghostbusters writer/actor Dan Aykroyd, who passed away on Sunday at the grand age of 98.

For much of his life, Peter H. Aykroyd was a civil servant for the Canadian government, serving as engineer in the construction of Quebec's Gatineau Parkway, as well as working with former Canadian Prime Minister, Pierre Trudeau, father of current Prime Minister Justin. He was also instrumental in the launch of the Community Foundation of Kingston and Area, Kingston's largest charitable organisation.

However, it is Peter's literary works for which he is best known, his scope of titles ranged from A Sense of Place, a personal history of the Aykroyd family, to The Anniversary Compulsion, an account of Canada's centennial in 1967.

Peter was also avidly interested in the world of paranormal, maintaining a collection and interest held by his grandfather, Dr. Samuel Augustus Aykroyd, a dentist and spiritualist, which would eventually lead to the publication of A History of Ghosts: The True Story of Seances, Mediums, Ghosts, and Ghostbusters.

It is safe to conclude that Peter's interest in the spiritual world sewed the seeds that would flower into the Ghostbusters property and fandom we know today. Because of that we all owe Peter H. Aykroyd a debt of thanks for the inspiration he gave his son.
Feeling overwhelmed by the Covid-19 pandemic? Please visit The Support Thread.

No one is settling for anything. Anyone who is not[…]

Best kit on the market is mack's Factory, hands […]

Greetings everyone! Small update on this pack. Th[…]