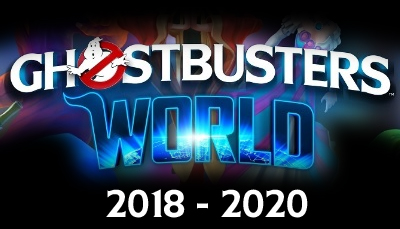 Ghostbusters World will be closing down on August 13, 2020. We hope you have enjoyed the game and thank you for all your support.
Please check your in-game mailbox for additional details and a special thank you gift to make the most of the last 34 days of service

Developed by FourThirtyThree Inc., the mobile game sought to get a slice of the success of Pokémon GO, through getting Ghostbusters-loving players out and about, battling ghosts and ghoulies solo, and with fellow fans.
Feeling overwhelmed by the Covid-19 pandemic? Please visit The Support Thread.

I can only guess that the game just wasn't as successful as Pokémon GO, which itself had suffered a drop in interest once the novelty had worn off.

By Macktacular -  July 13th, 2020, 11:32 pm
-  July 13th, 2020, 11:32 pm#4937146
That's disappointing, but I'm not entirely surprised. After about a full year of playing the game I wound up pretty much dropping it in early 2020 simply because they weren't doing anything new with it. They never added a second "issue" to the main story, they stopped adding new ghosts. They didn't even enable the Christmas-themed ghosts for the 2019 holiday season, and that's just swapping out the models. The first time I actually started to believe the folks in the game's chat that "the game is abandonware" (people have been saying that TF2 is dying for a decade now, and it's playerbase hasn't decreased in the slightest) was when it took them over a week to respond to an issue where the game would crash on start up for a lot of their players, and then almost another week before it was fixed. It just reached a point where the only "content" was PVP, and it was clear that you couldn't progress past a certain level unless you put a lot of money into the game.

It's a shame because it's a solid game, and a tie-in with the new movie could definitely offer material for new cosmetics, story, ghosts, etc. Plus draw attention to the app. Pokemon Go had a slump, but they eventually introduced a bunch of new pokemon, features, game mechanics, cosmetics, etc. - and that got more people interested in it than ever. Even the MIB game is continuing to add stuff, and that's not nearly as big of a name as Ghostbusters.

I will say this though; the runes system was needlessly complicated. Okay so runes provide boosts to your ghost's stats, good. Certain number of same-coloured runes provide an additional boost, okay that's good too. Some runes require different amounts, so you can't min-max the ghost too much, okay that's fair. But then each rune slot is a type and putting a rune that fits that type provides a bonus and where runes are in relation to each other and... yeah that was too much for me, I never bothered to try and figure it out.
I really have no idea what I'm doing.

I appreciate they included some rare ghosts from the cartoons and the art style was pretty good, but not as pure "Ghostbusters" as the Answer the Call mobile game. However, the game featured a large amount of "ghosts" that were just generic... cats, people, genies, wisps... with half a dozen variants to pad out the game. They really should have leant into the neon/flourescent and cute/scary designs of the films.

To my mind, the strength in using the Ghostbusters IP in this type of game is ghost HUNTING. They could treat the phone like a PKE meter, have IAP which are bought or accumulated to uncover certain ghosts or unlock more pages of Tobin's Spirit Guide which would let you discover more ghosts. Like the GBTVG, ghosts might be hiding in items around you, you may need to use research tech to catch certain ghost, use gestures etc to reveal them. Uncovering and catching could have been much more involved rather than an RPG-lite post game.

They could also have had the gyms or raids with you nominating ghosts to do "battle", but in a much simpler and less grindy way than GBW.

Maybe someone will have another go if Afterlife is a hit.
Macktacular liked this

I saw yesterday that the Rocky IV Directors Cut is[…]

I have a feeling that with Walmart stocking Space […]

Why not dump it into the toilet and flush it? The[…]