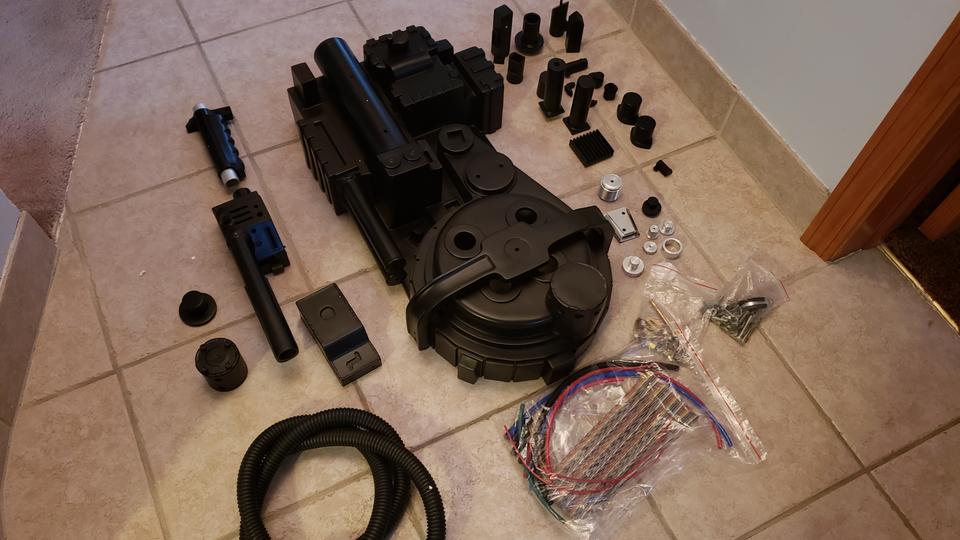 If I were just assembling the kit as it came, I think it took me about 10 hours, working roughly 2 hours a night to get the pack/wand together, but I upgraded quite a bit from the stock kit and made a few modifications like having the crank knob control the volume, and added an external power switch, power jack and audio jack. The whole build + mods took me about a month. Unfortunately, I lost track of total hours involved. 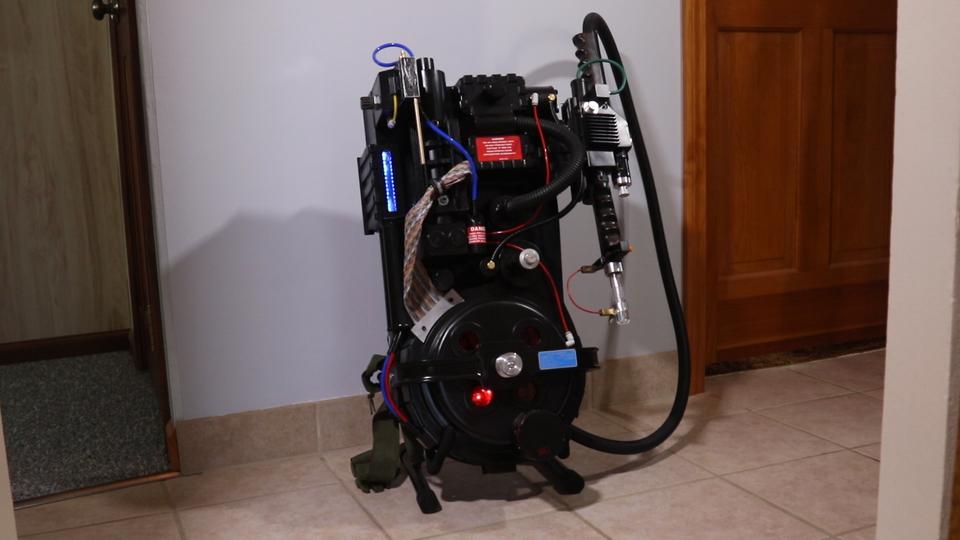 The Alice frame is not the Anovos frame... I did order one but I had already bought a spare in case theirs never materialized. Since I had already mounted my frame, I took the foam off the top bar (hadn't sourced that yet!) and gave it to my brother for his spirit pack. 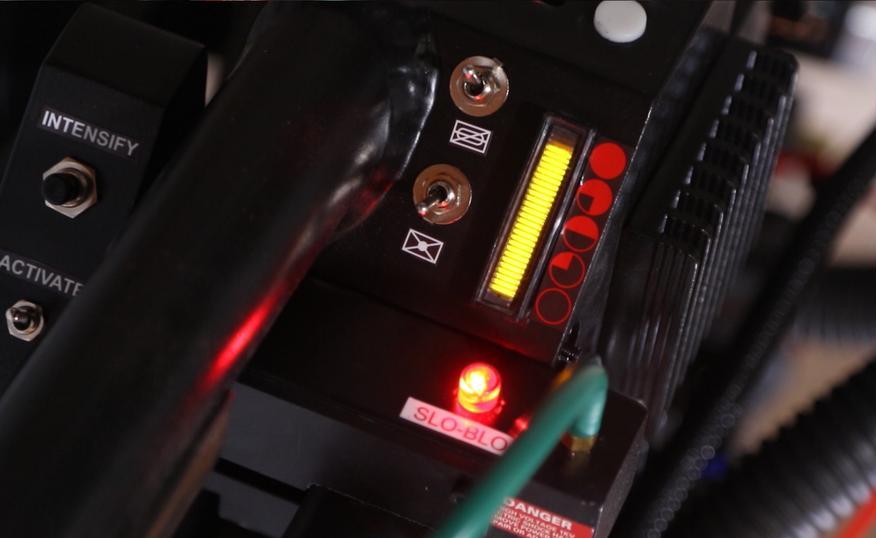 Total investment; just shy of $1100. Not cheap, but still cheaper than buying a pre-built one, and I got to have all the fun of building it myself. This thing was a beast, but totally worth it.

I'm not great at hosting pics, but I did I document everything pretty thoroughly, and after a few weeks to make sense of all the chaos, I compiled my thoughts and edited everything into a build video.

I just wanted to thank everyone on this forum for being so helpful- it was really inspiring to see what people had done with their packs, and to be able to cherry pick from so many great ideas to take my own pack to the next level.

Had I found this forum before ordering, I probably wouldn't have gone the Anovos route, but I can say with complete certainty that my pack turned out better because of the time spent here.
twmedford23, deadderek, Ecto-1 fan and 4 others liked this

Hopefully the video helps anyone brainstorm some creative solutions to problems they might be facing with their kit build; a lot of the threads on here helped me greatly in that department.

I'm extremely happy with how the pack came out, and how well the various mods/aftermarket parts plugged in. Even with all the issues, it's still a pretty nice base kit and with a little elbow grease, you can make it really shine.

By chris8414 -  April 21st, 2019, 6:56 pm
-  April 21st, 2019, 6:56 pm#4917189
I watched your video and its a great build! Very Nicely done! I wish I had the time and patience to tackle this project, But I have bought a replica from someone that has already been fully built. My next task is to have Karnivourus Creations build me a complete Ghostbusters 2 Pack with full lights and sounds from the second film. Wish me luck! LOL
livewire008 liked this

By livewire008 -  February 29th, 2020, 6:52 pm
-  February 29th, 2020, 6:52 pm#4931860
I know it's been a while since declaring this "finished" and I'm still quite happy with how everything came out (pack in acrylic mother board still holding like a champ!) but after a few adventures like Halloween and a trip to the local comic con, I realized how hard it is to transport a full pack and really wished I had thought about how this thing was going to travel. I always intended it to be a showpiece, but cons/etc. notwithstanding, I'll have to move eventually so the problem will arise again.

After a little digging here, "I am Jack's complete lack of surprise" to find; I wasn't the only one to think a disconnect would be a good idea and I found a thread by dartdemon340 on that very subject.

In that same thread, greg883 was kind enough to post a link to a connector on Amazon that I wound up ordering (make sure you get the 14 pin version -- I wound up going with the 20.5mm size) and it fit perfectly inside the Anovos supplied loom. 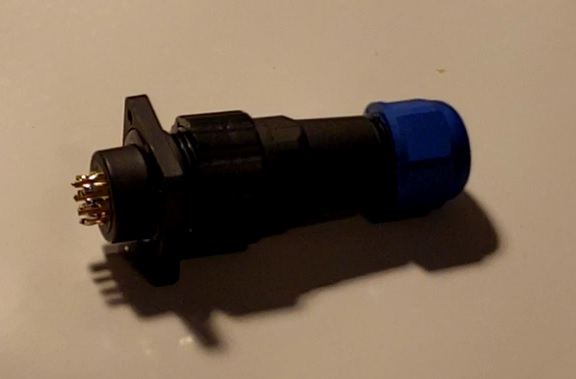 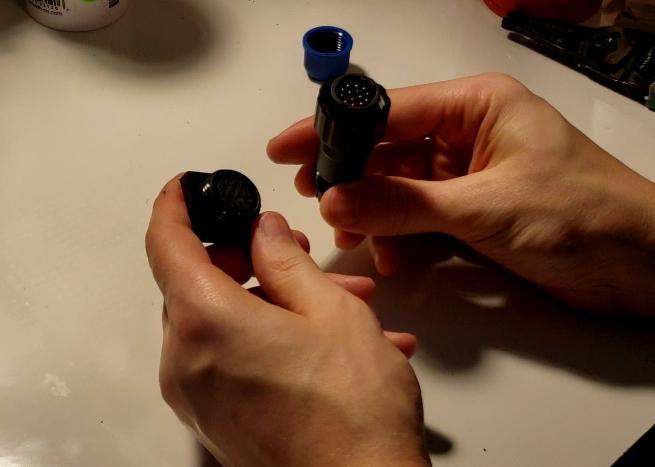 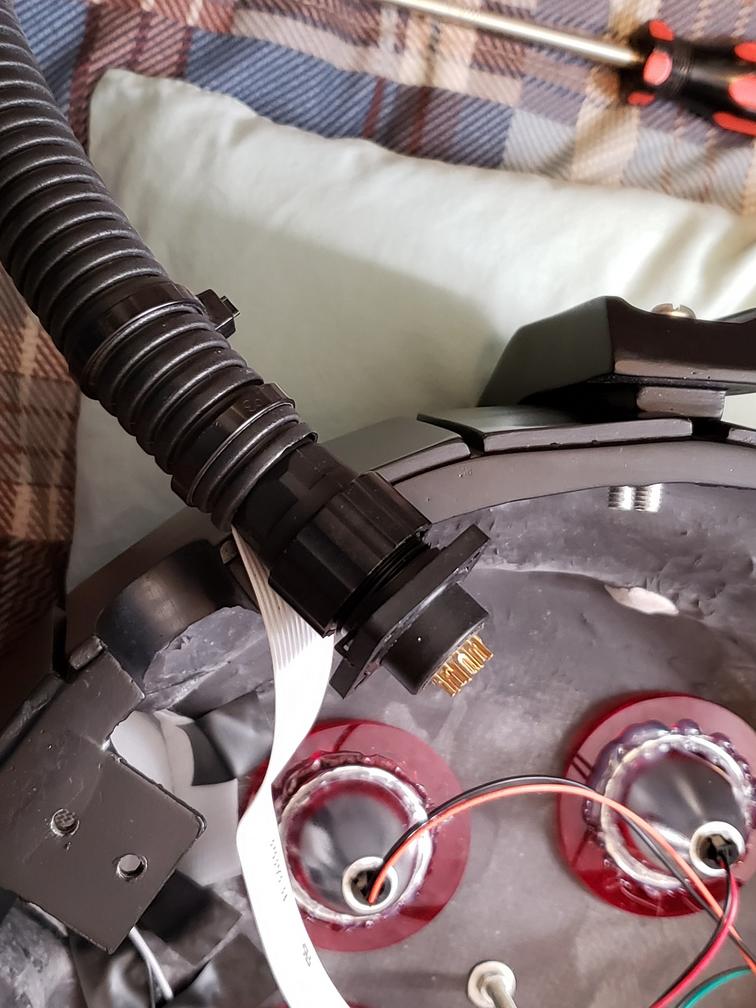 above; dry fitting the connectors before cutting the ribbon... the zip ties previously secured my loom into the pack shell. I used a crap load of Loctite instant mix epoxy to glue it in after wiring it up. 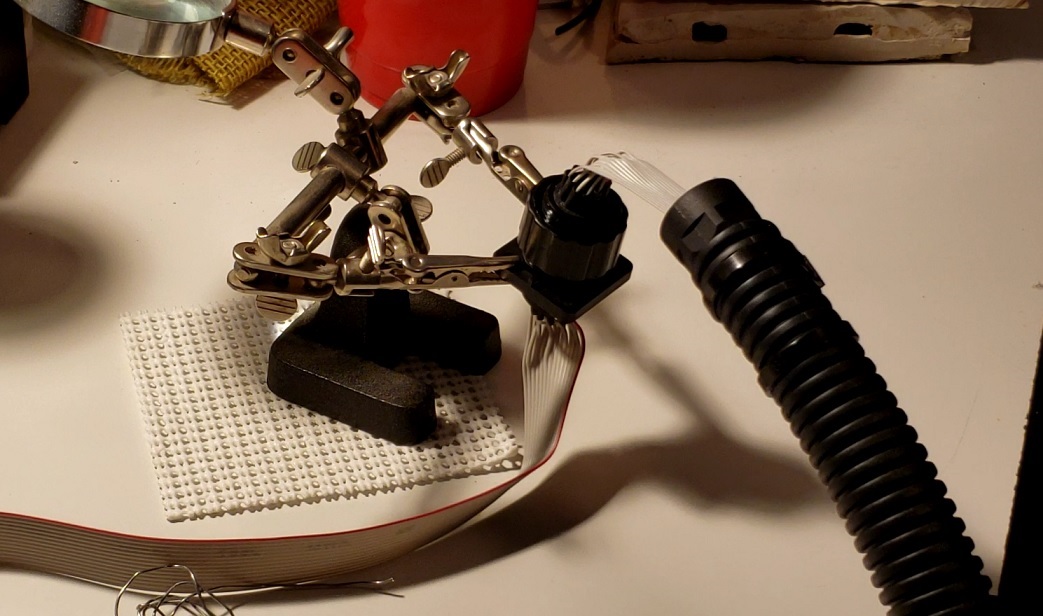 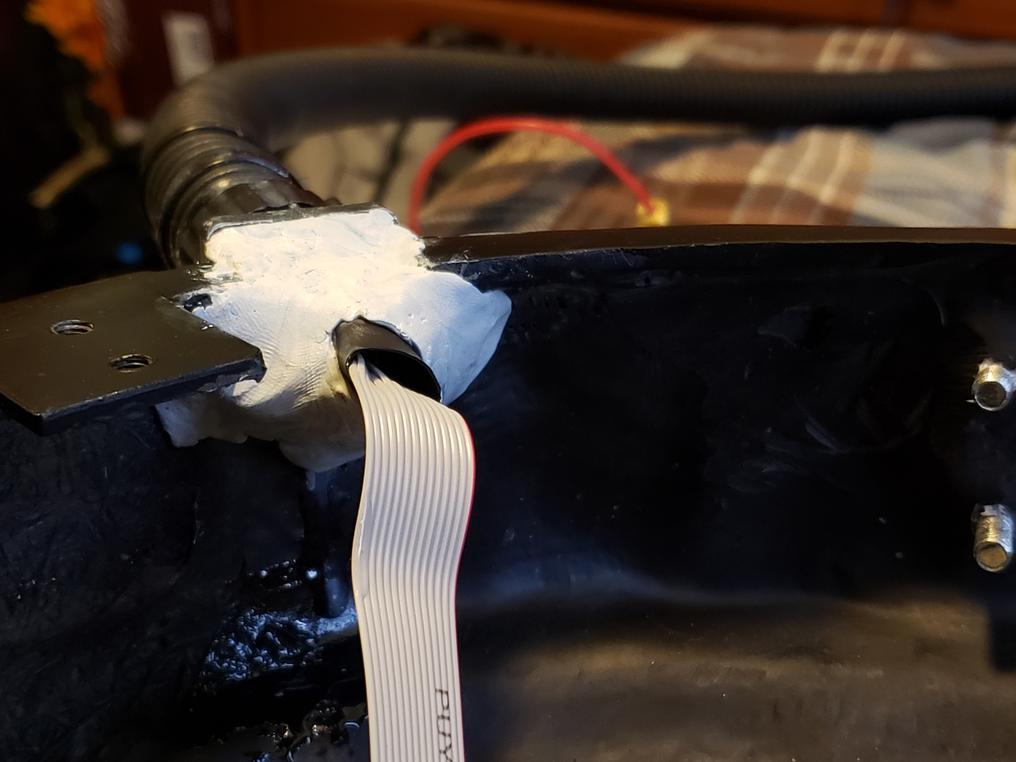 The flange was a little too small to use the panel mount holes to drill/secure it onto the pack. I used a larger piece of shirnk tube to protect the wiring, and super glued it into the hole (for initial stability) then buried that under a mountain of Loctite epoxy putty to secure it in place since I know that stuff cures rock hard and can take abuse.

The connector, being waterproof, is VERY snug and you have to apply quite a bit of force to break the vacuum and remove the plug from the panel mount side. I removed the connectors O ring to help counter act the vacuum effect but it's still very snug, so it was a situation that I figured "overkill" was "just enough kill" and wasn't stingy with either the glue or epoxy. 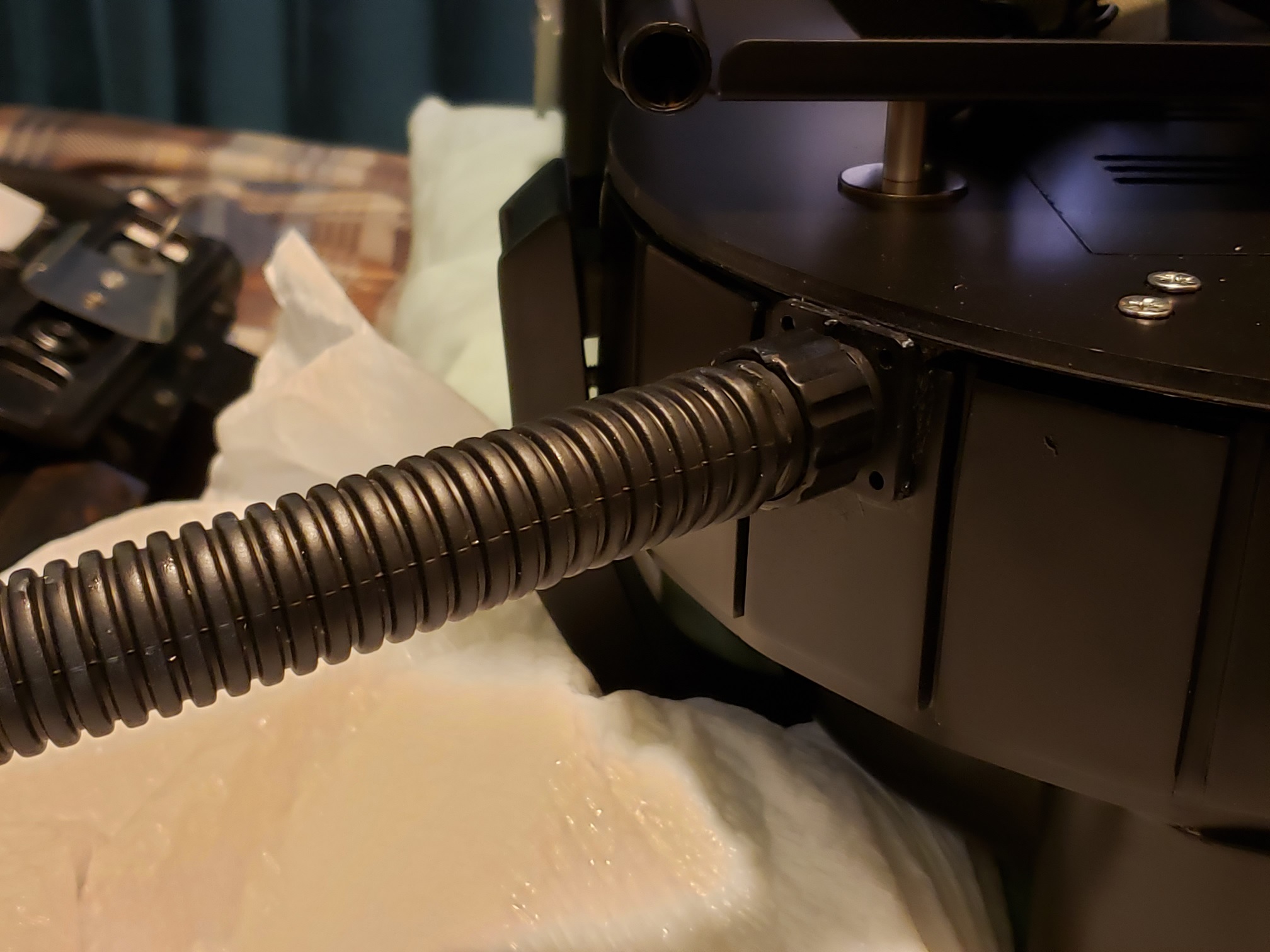 After everything cured, it took just a tad of touch up paint to cover up any white epoxy that was showing.

Took about 3 hours, all told (full cure time not withstanding). It was well worth the trouble and next time I have to move this thing, I can wrap the pack and wand separately and move it much easier from point A to point B.

It wasn't the worst, but it still took a fair amount of planning to implement after the fact. I could go into more detail and I'm thinking about doing a follow up video on the mod, in case anyone is interested.

Thank you, everyone for the suggestions. Once again; I didn't need to look far to take my pack to the next level.
deadderek, Marcus B liked this

It's ideas like that that make these boards so helpful, it's such a simple and oh so usefull idea and after hearing it, you don't know why it wasn't obvious from the start?!