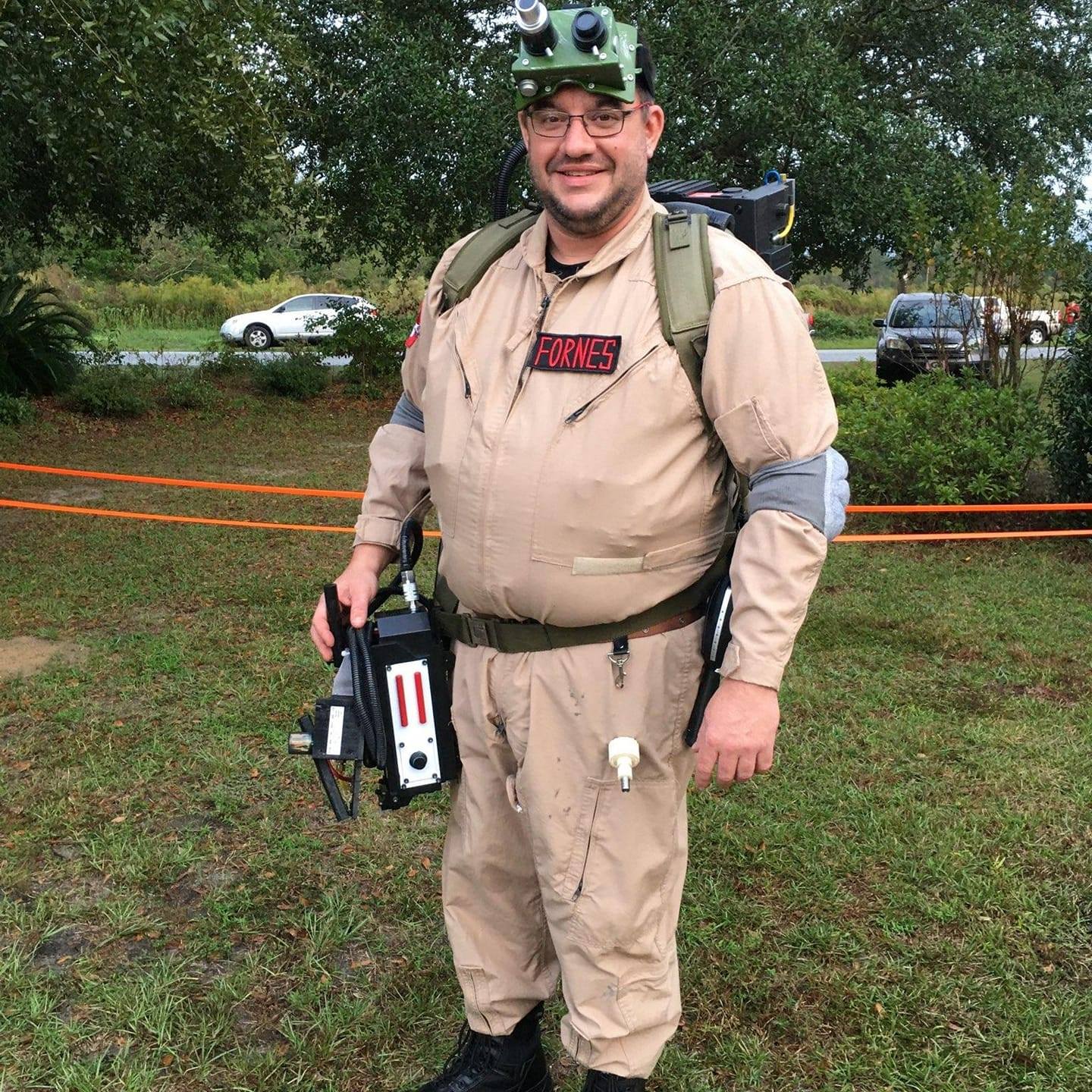 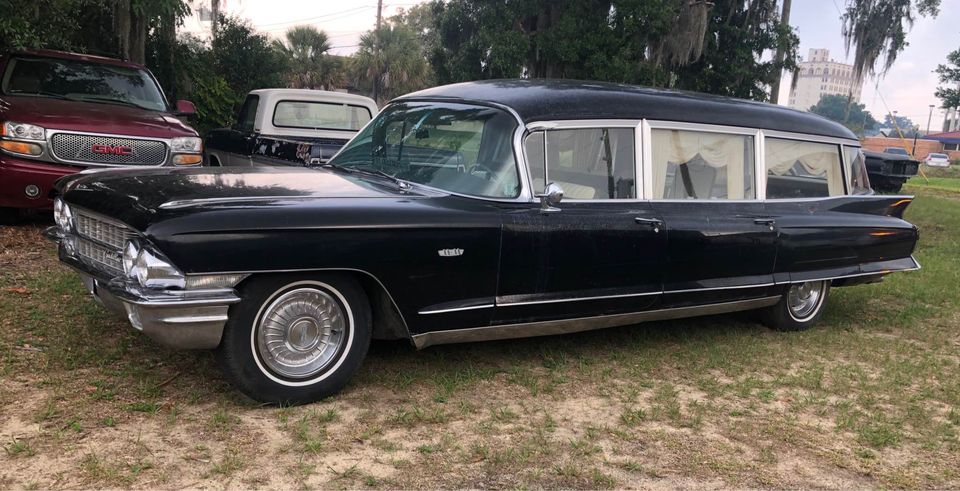 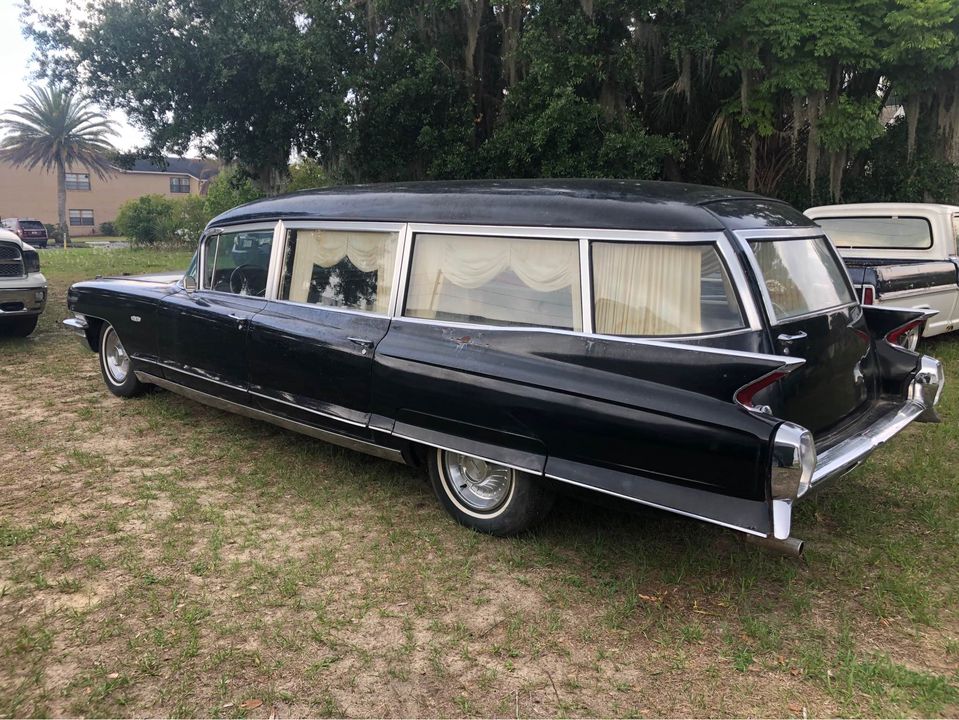 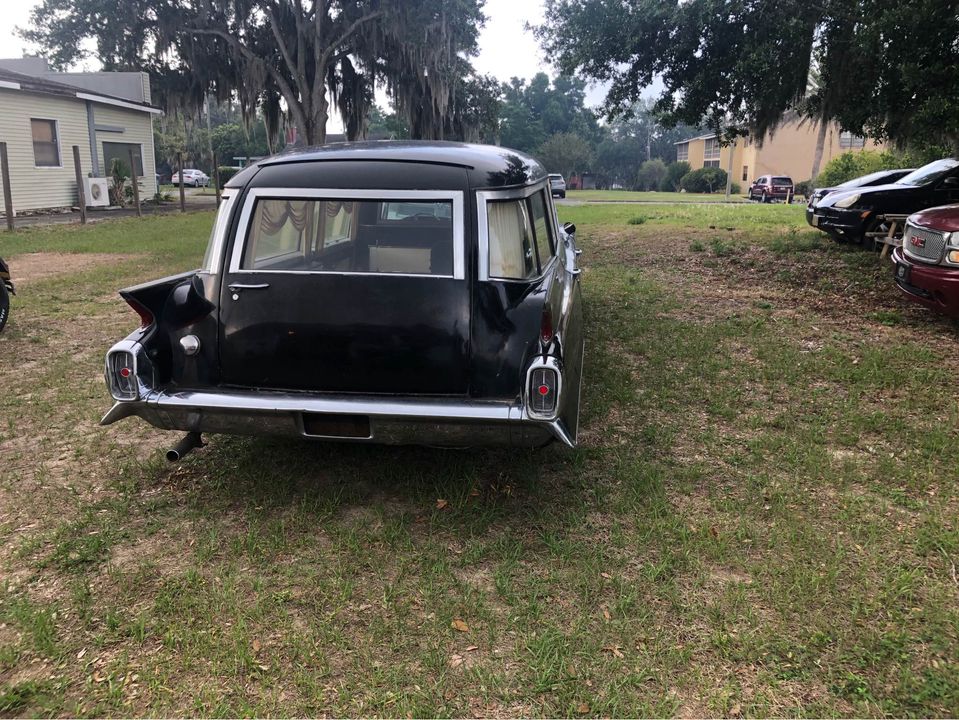 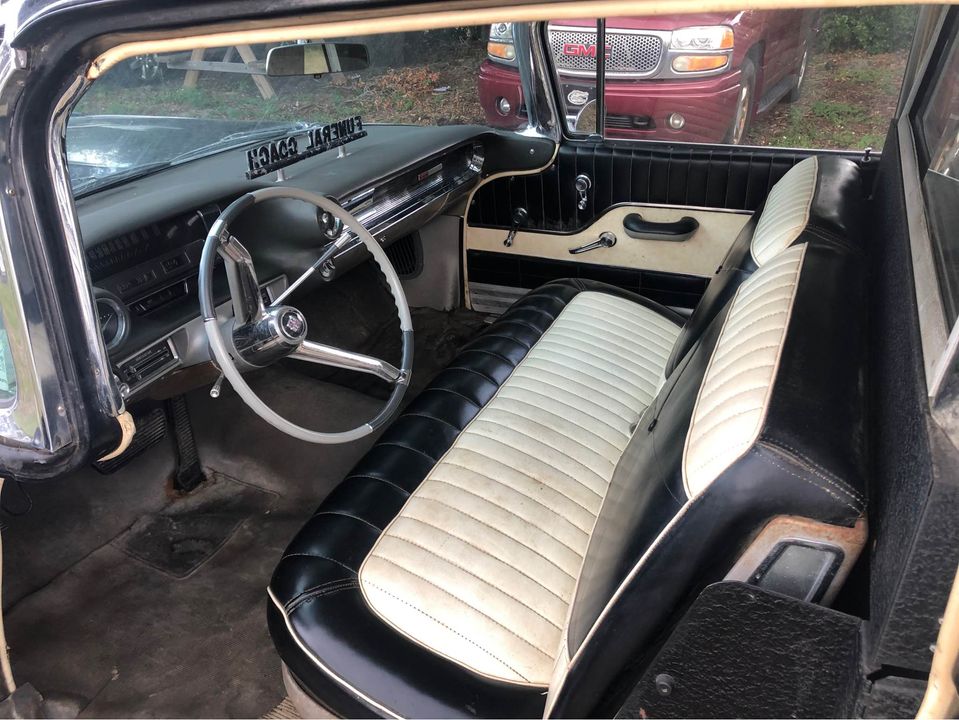 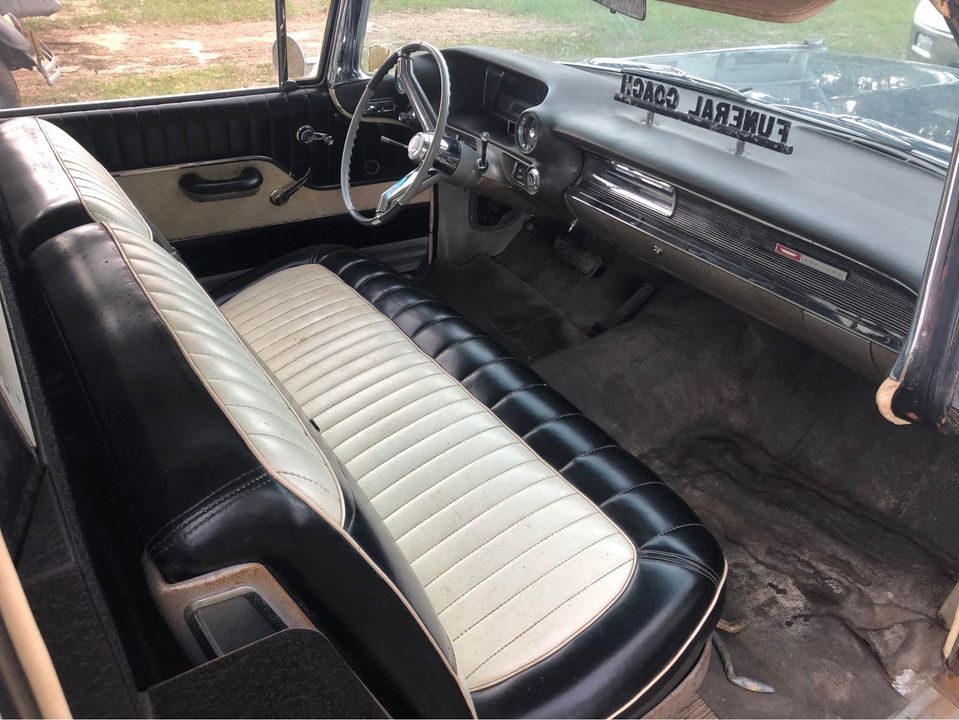 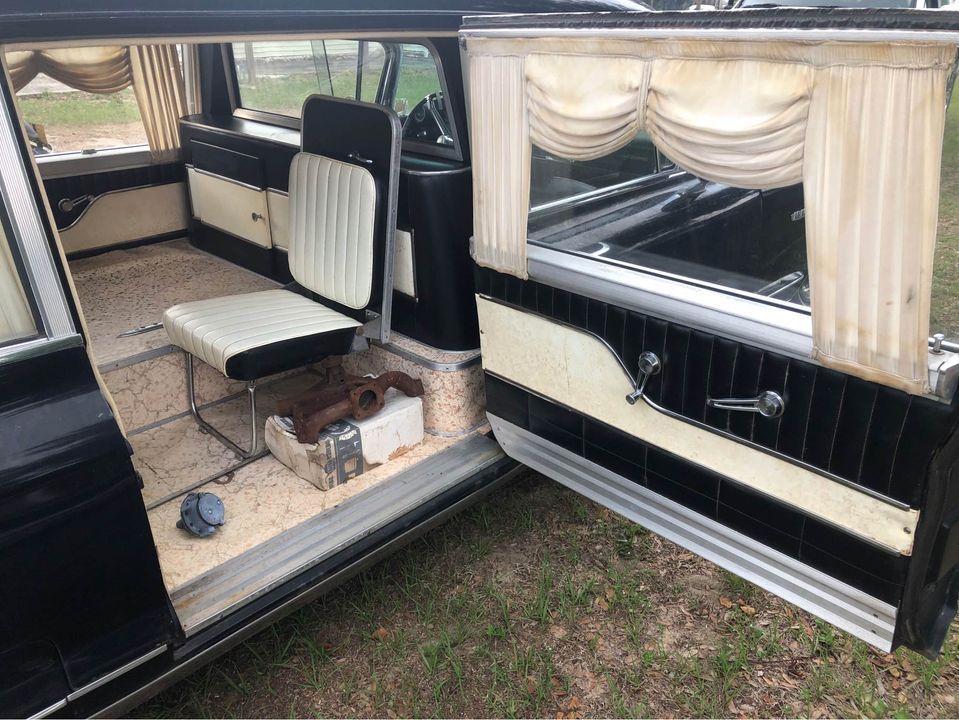 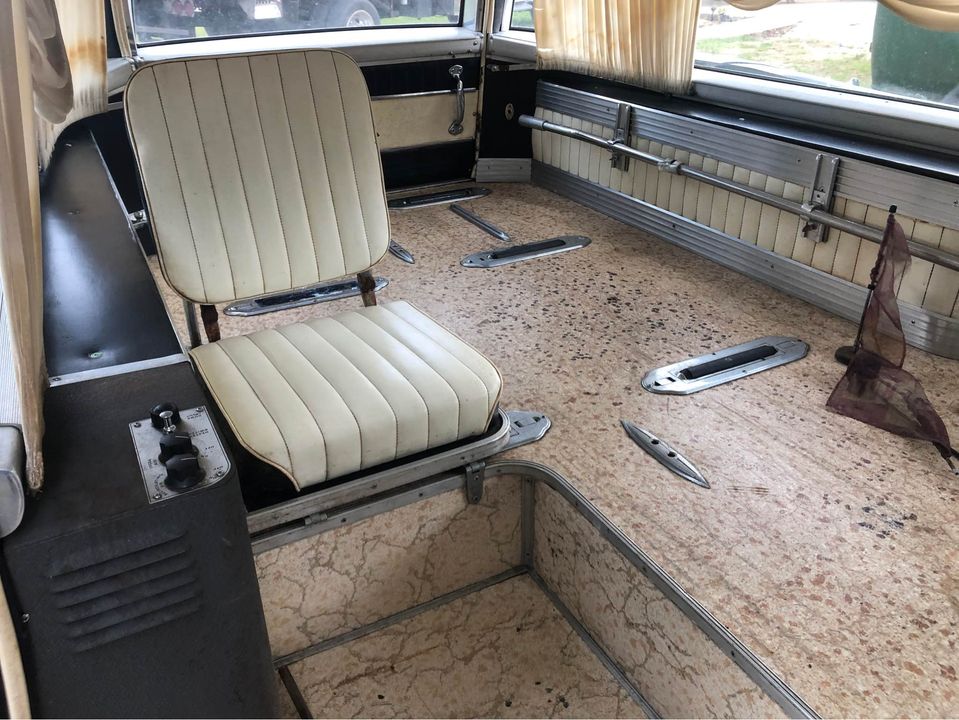 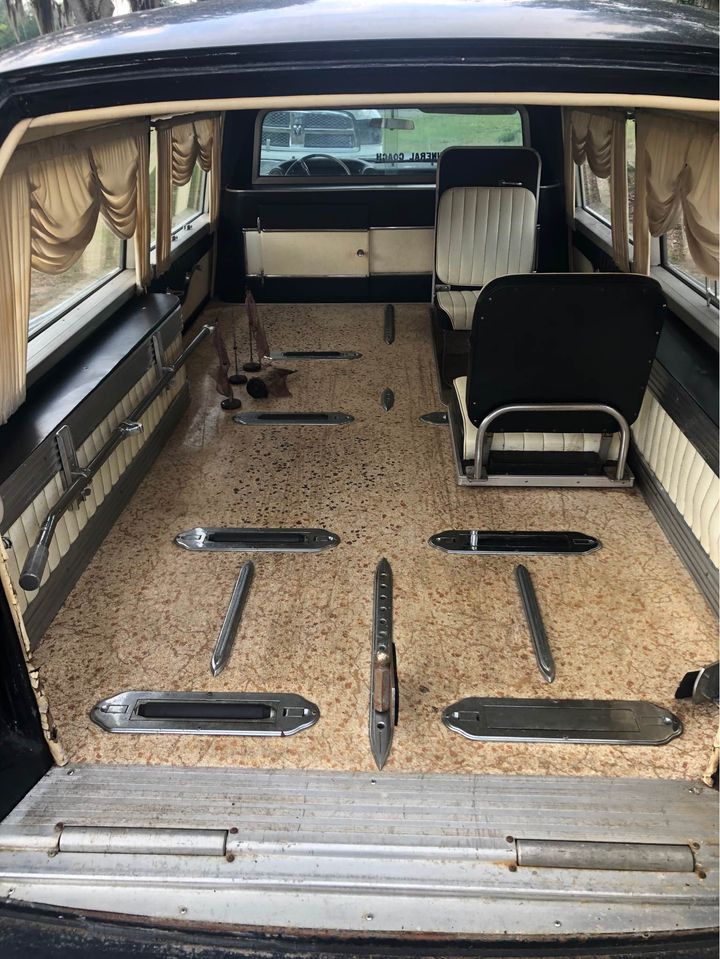 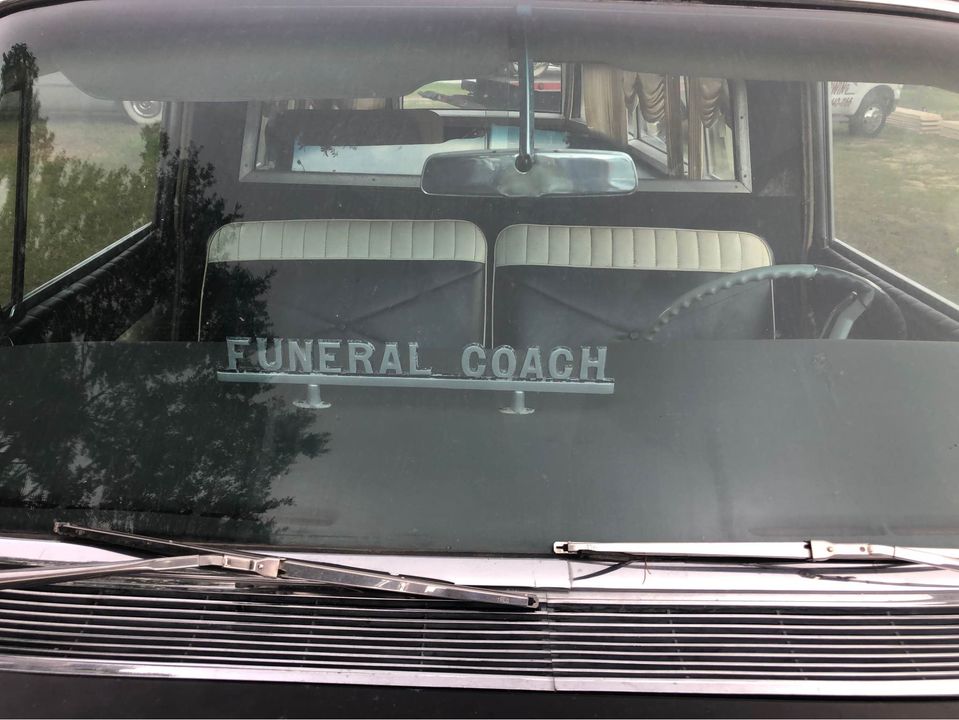 I bought this Saturday! She's a 1962 Cadillac Miller Meteor Duplex! I originally bought her sight-unseen (photos only) with the intention of making an Ecto 1, but after getting to Florida to pick her up, the plans have changed! She's too clean, too original. The paint has the perfect patina! She has 66,000 miles, and I'm only the third owner. Everything you see is original other than one very old repaint. She runs great, but the brakes, wipers, and blower motor are inoperative. She has the originals owners manuals (2), the original spare tire, and even the original medical supplies in the rear cabinets. She has one "Ambulance" plaque and one "Funeral Coach" plaque, four maroon & yellow "Funeral" flags with magnetic bases, two casket stops, and two casket keys. She's 90%+ rust free, with the worst of it being in the rear lower quarters and one fist sized spot on the left inner rocker panel. The floors are as solid as a rock. The story I was told is that she was purchased new by a funeral home in a small town in Indiana and used as a hearse & ambulance. When they retired her, a collector in Indianapolis bought her and has had her for the past few decades. Recently he decided to liquidate and sent this car (and like 10 other classics) to a broker friend that lives south of Orlando, FL. He said he was originally going to put her on eBay, but decided to give Facebook Marketplace a shot. I saw the ad about 30 minutes after he posted it, called him immediately, and made the deal. I was not expecting the car to be this clean or original, which is why I've decided not to Ecto her. She was last inspected (in Indiana) in December 1980. I do plan on swapping her to disc brakes for safety sake. She has the 390, power steering, power brakes, automatic transmission, front & rear heat, no A/C, and she's radio delete. Her name's Morticia and she has now joined my forever-fleet (along with my '68 C10 and '73 Roadrunner)!
deadderek, Ecto-1 fan, kahuna900 and 2 others liked this

Ho-ly shit.
"Ok. opening at number 2, to sub 50 million, next to the 2nd weekend of an animated kids movie, is NEGATIVE. Let me just clear that up right now. There is no middle ground on this. Studios DO NOT spend 100 million in marketing money to open at number 2. No sir. No. No. No. No." - Richardless

Ah dang. This is literally my first mod. And iv le[…]