Buffalo Ghostbusters present new sign to the crew of Hook & Ladder No.8

Buffalo Ghostbusters present new sign to the crew of Hook & Ladder No.8#4950194 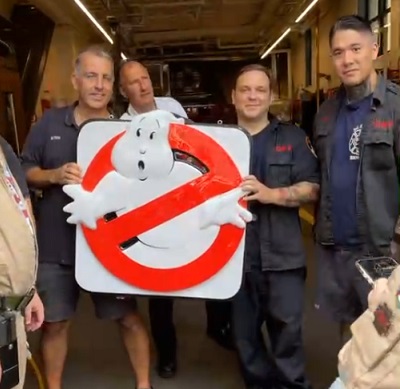 In an update to our previous story: whilst in front of an enthusiastic crowd of Ghostbusters fans, families and New Yorkers, The Buffalo Ghostbusters franchise has officially presented the Ghostbusters logo sign to the crew of Hook & Ladder No.8.

Also presented to the crew was a commemorative plaque, featuring the names of all the people who helped raise the incredible $7,900 total, which included the original pledge of $1,000 for the replica. In a subsequent statement made by The Buffalo Ghostbusters, the sign replica was actually donated to the effort by Sony and Ghost Corps, and that some of the money raised will help to purchase a full-size, weatherproofed sign that can be hung outside of the station for public events, expected later this summer. The remainder of the donations will also be going to the crew of the station.

In a further announcement to those gathered for the event in person, as well as a further 600 people watching the livestream, The Buffalo Ghostbusters also announced plans to make a regular event to raise funds for Hook & Ladder No.8 and its crew each April.

If you weren't able to witness the event live, you can watch it here

This story has been updated 09/06/2021.
kahuna900, robbritton liked this
Feeling overwhelmed by the Covid-19 pandemic? Please visit The Support Thread.

The Buffalo Ghostbusters wrote:Now that we’re back in Buffalo, we wanted to take a minute to recap the details of our Ghostbusters sign event at Hook & Ladder 8 in NYC.
First, the sign that we were raising money for was generously provided by Ghost Corps and Sony Pictures, so we didn’t have to use any of the donations on that sign. This sign is not rated for outdoor use, however, so that sign won’t be hung outside the firehouse.
But now for the big news… we’ve commissioned a full-size, weatherproofed sign that will be delivered later this summer. It will be a professionally made, high quality sign that the firehouse can hang outside whenever they like!
We're also happy to report, the firehouse has been able to epoxy the GB2 sign. It has a new permanent home within the engine bay, and won’t need to be moved around anymore, which will help prevent further damage.
Also, we were able to present the firehouse with patches from most of the franchises that donated. If anyone would like to send them a patch for their wall, you can mail it direct to the firehouse at:
Nick Vitucci
14 N. Moore St.
New York, NY
10013
Finally, we’ve decided that every April, we will be doing a GoFundMe for Hook & Ladder 8 and will coordinate with the crew at the firehouse to raise funds for whatever they might need at the time.
Thank you again everyone. We’ll be sharing lots of photos and videos from the event in the coming days/week. We all had an incredible time and it’s a moment we’ll never forget!

Not The Seed, as that was Aykroyd's solo script. […]

It's comforting to know we all ended up a havin[…]

Not much to report on this at the moment. Just wai[…]