Ghostbusters items to be auctioned by Prop Store#4950960 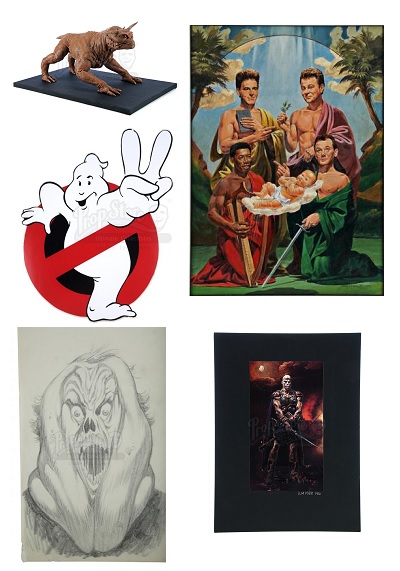 As with all things this past year due to the pandemic, the auction houses have also suffered substantial disruption. Whilst Profiles in History appears to still be in hibernation following it's last auction in December 2020, Prop Store are gearing up for their next event: Scheduled for June 29th through July 1st, and like several previous auctions there's a selection of items that'll interest Ghostbusters fans.

Please view the topic for detailed listing of the auction lots.
RedSpecial liked this
Feeling overwhelmed by the Covid-19 pandemic? Please visit The Support Thread.

Re: Ghostbusters items to be auctioned by Prop Store#4950961

This hand-painted, 1/4-scale foam latex puppet was crafted by production from original Dog molds, but was ultimately not used onscreen. It is cast around a wire armature and affixed to a black cloth-wrapped wood base. This puppet remains in good overall condition due to preservation work conducted by a Boss Film Studios employee, including the application of a flexible protective coating. Dimensions: 24" x 16" x 12" (61 cm x 40.75 cm x 30.5 cm)
Estimate: $6,000 - 8,000

This Raphaelite-style portrait "by the famous artist Fettuccine," is rendered in mixed media and affixed with a white poster board border and backing with a wire hanger. It was done as a "final" painting for the full-size portrait by production illustrator Jack Johnson, who has signed the painting on the bottom left corner. The prop seen in the film was based on this Johnson illustration but does not match it exactly. It exhibits signs of wear from age and use, but remains in good overall condition with its vibrant coloration still intact. Dimensions: 26.5" x 20.5" x .5" (67.5 cm x 52 cm x 1.25 cm)
Estimate: $12,000 - 16,000

689. Hand-drawn Bernie Wrightson Library Ghost Concept Sketch GHOSTBUSTERS (1984)
A hand-drawn concept sketch of the Library Ghost from the production of Ivan Reitman's supernatural comedy Ghostbusters. The ghost of librarian Eleanor Twitty was the first apparition that Dr. Peter Venkman (Bill Murray), Dr. Raymond Stantz (Dan Aykroyd) and Dr. Egon Spengler (Harold Ramis) encountered in the film as they investigated the New York City Public Library. The artwork is rendered in graphite on tracing paper by renowned comic artist Bernie Wrightson, who worked as a creature design consultant on the production. There is an annotation written in black ink along the top and the drawing is labelled "7". The artwork is in good overall condition, with minor creasing, tape remnants down the right edge and a rip in the bottom right corner. Dimensions: 15.25" x 9" (38.5 cm x 23 cm)

690. Blue Crew Bomber Jacket GHOSTBUSTERS (1984)
A blue crew bomber jacket from the production of Ivan Reitman's supernatural comedy Ghostbusters. Bomber jackets like these were gifted to crew members who worked on the film. This custom blue cotton and polyester blend zip-up bomber jacket with a snap-button collar and a chest pocket is embroidered with the Ghostbusters' red, white, and black ghost logo on the right side and "Pat" for model maker Pat McClung on the left side. The jacket is in excellent overall condition with minimal signs of wear.
Estimate: $800 - 1,000

691. Main Cast-Signed Photo with Additional Promotional Stills GHOSTBUSTERS (1984)
A promotional photo signed by the main cast with additional stills from the promotion of Ivan Reitman's paranormal comedies Ghostbusters and Ghostbusters II. This set consists of eight black-and-white glossy stills from the production of the first film and three stills from the sequel printed in both color and black-and-white, one of which is signed in black ink by Dan Aykroyd, Sigourney Weaver, Harold Ramis, Bill Murray, and Ernie Hudson. It exhibits minor signs of use and wear, but remains in excellent overall condition. Dimensions (each): 11.25" x 8.5" x 1.5" (28.75 cm x 21.75 cm x 4 cm).
Estimate: $400 - 600

694. Ecto-1A Car Door Decal and Pair of Ghostbusters Balloons GHOSTBUSTERS II (1989)
An Ecto-1A car door decal and a pair of Ghostbusters balloons from Ivan Reitman's action-comedy sequel Ghostbusters II. The reunited Ghostbusters updated the Ecto-1A with a new two-fingered No-Ghost logo, and sold merchandise featuring the logo, including balloons seen throughout the film. This lot consists of an unused black, white, and red Ecto-1A decal with its original peel-away backing and two black rubber "No-Ghost" balloons. It is in good overall condition with minor signs of wear and age, including scuffing to the decal and sticky rubber. Dimensions (decal): 16" x 13" (40.5 cm x 33 cm); (balloons, each): 4.5" x 2" (11.5 cm x 5 cm).
Estimate: $1,500 - 2,500

696. Crew Jacket GHOSTBUSTERS II (1989)
A crew jacket from Ivan Reitman's supernatural comedy sequel Ghostbusters II. Production gifted these letterman-style jackets to cast and crew. This black cotton blend Nike jacket with metal snap buttons, red leather sleeves, black satin lining, and ribbed details on the collar and waist is emblazoned with the Ghostbusters II "No Ghost" logo on the left breast and the Nike "swoosh" on the interior and right breast. It exhibits signs of wear from age and use, including small moth-made holes around the film logo, but remains in excellent overall condition..
Estimate: $800 - 1,200
Feeling overwhelmed by the Covid-19 pandemic? Please visit The Support Thread.

Re: Ghostbusters items to be auctioned by Prop Store#4951099

Re: Ghostbusters items to be auctioned by Prop Store#4951132