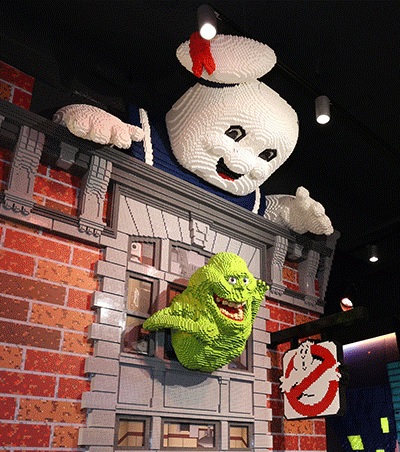 Over the course of the past seven years, LEGO has released a number of sets based on the Ghostbusters brand, most notably minifigure-scale reproductions of Ecto-1 and the Firehouse in 2014 and 2016, and last year's expert-level replica of Ecto-1 from Ghostbusters: Afterlife.

The Danish company has designed a new build based on the Ghostbusters brand, however it will be an exclusive feature of it's revamped 7,157-square-foot store located in Rockefeller Center.

Awash with large-scale representations of New York iconography, including Marvel's Avengers and the Statue of Liberty, the Ghostbusters are represented in the form of Slimer, Stay Puft and the Hook & Ladder No.8 Firehouse, which decorates the sides of the store's elevator.

In addition to the LEGO sculptures, the store will feature many of the facilities AFOLs and their families have come to expect from LEGO's flagship stores, including the Minifigure Factory, Mosaic Maker, the Pick a Brick Wall, as well as the new Brick Lab experience.

LEGO and Ghostbusters fans will be able to see the new sculpture in person at The LEGO Store - Rockerfeller Center which had its grand reopening earlier today.
Alex Newborn, ccv66 liked this
Feeling overwhelmed by the Covid-19 pandemic? Please visit The Support Thread.

Cheers for the links, C,HC. I'm a little startled[…]

I think you're on the money. Janine made a joke […]

Thanks that worked a treat!