It fit nice and snug under my cyclotron light shelf so I positioned it centrally, marked the holes and drilled out clearance holes for m5 bolts.

Next was the oh so joyous task of drilling a speaker grill, using Alan Hawkins 4" speaker template. I traced the outline of the speaker while bolted in and used that to position the template. Taped in place, I used a punch to mark all the holes, drilled them out (pilot first then 4.5mm) then finished them off using a countersink bit to deburr them all, not the most exciting hour and a half of my life but it looks pretty good...

While I was at it, I sorted out mounting my Talentcell inside. The simplest way is usually the best so I used some velcro strips glued onto the mobo and battery to wrap around the battery, which holds it nice and firm but can be removed if needed.

By JWils23 -  May 30th, 2021, 12:06 pm
-  May 30th, 2021, 12:06 pm#4949733
I just wrapped mine around the speaker connections tight and then put heat shrink on them. On my spirit build I just wrapped them and didn’t even cover them. If you wrap them nice and tight you shouldn’t have issues. You can also buy connectors that you crimp the wire with to use, just depends on how you want to do it. Then the other ends just slot into the terminals on the GBFans board.
Someone blows their nose and you want to keep it?

By l3w1sb159 -  June 2nd, 2021, 11:39 am
-  June 2nd, 2021, 11:39 am#4949885
So I finished up the last few bits on the shell side of things;
First of all, I sorted out the loom into the crank generator, I originally had planned to just have the dowel in the loom epoxied in place inside the shell, but it seemed a bit too tricky to get it to stay in place until it set. So I came across Bishopdonmiguel's build thread and saw he used magnets to secure his loom in place. So I chopped the dowel down in the loom and cut a smaller piece of dowel to be epoxied inside the shell for the loom to connect to, with 2 7/8" magnets gorilla glued onto the ends.

Here's a view from inside the shell,

While I was there, i chopped off the excess ribbon cable, wrapped it in electrical tape and popped a cable tie around it to stop it from pulling back out.

Last and not least for the shell, I glued the powercell and cyclotron lenses in place. I also attached the aluminium plate labels; the bumper label was from GBfans and was top notch, I ordered the rest from EugeniousProps on ebay, I'll be honest they could have been a bit better. They didnt have adhesive backing; so had to be glued on, and the edges had sharp burrs on them which I had to smooth off. But they look pretty good and do the job. Once everything was done I gave the shell a light weathering, scuffs, burnt umber wash and black wash to give various parts a dirty/rusty look.
I also swapped the grey crank knob for a black one from the GBfans shop, I'll use the grey one on a future GB1 pack at some point.

And heres how she sits...

Right, so I've been cracking on with trying to get switches and lights wired up in the wand.
It's quite snug inside my TC thrower so unfortunately I wont be able to use the rumble motor I was planning on installing, but I can save it for when I come to build an all aluminium wand down the line.

So to start with I fit the switches and push buttons, the latter of which I had to enlarge the hole on the trigger box to give me enough space to work it in. I drilled it out to 9mm as I didnt have and 8mm bit; which probably would have worked a bit better as the nut only just about covers the hole, but it's in snug and is barely noticeable.

Next I sorted out the lights in the gun box, for the buried hat light on too i used the replica that came with TC's kit as you only see the tippy top of it, and for the hatlight down by the clippard I used 1 of 2 proper hat lights i got from the GBfans shop. As I didnt have the sockets to save room I simply drilled the hole so the thread could fit in snug and put a small blob of super glue on to make sure it didnt fall out.

Theres a few things in those pics I'll get to later, next of which was the arcolectric clear and red indicators, which I got from a company called Farnell (similar to Radwell but managed to get 2 sets of each colour indicator for about £15 cheaper and for free same day dispatch)

Next up is the bar graph, which fit snug into the 3d printed bezel I got from benofkent. It holds itself in place pretty firmly so I shouldnt need to use standoffs or the like. For my next build though, I am definitely going with spongefaces bezel kit to get it as screen accurate as possible.

And if it wasn't painfully obvious, I managed to snag a set of dry rub transfer decals from Mack's factory and, oh lordy, are they good. I managed to apply all of the thrower and n filter decals without fudging it, so I'll have a whole set to use on my next build.

Next I used the old "just wrap some craft foam" method of holding the leds each cap. For the vent light I did the same using a miltary flashlight reflector reccomend by tobycj. I had to saw the bottom threaded part off to save space, popped the foam wrapped led in and its ready to go.

Firstly, I positioned the vent reflector as centrally as I could get it, and when I was happy blobbed a few spots of gorilla glue around the edge. 20 hand aching minutes later it was nice and secure. After I pushed the rest of the leds into their respective holes I mounted the wand board on some very low standoffs to save as much room as possible.
Trying to keep things as tidy as I can with some small cable tidy clips.

Next up, I sorted out the front grip and barrel switches and leds. For the barrel led I unclipped the wires from the connector ( taking a pic before to remember the order) and fed the wires through the hole in the dowel that tobycj made up for me. Unfortunately due to the heat shrink on the wires under the led it was too thick to push any more through the hole and the led is visible when the barrel is popped out. I didnt want to try and remove and heat shrink for fear of screwing the wires up.

As for the ear switch and led, I had already used the orange hat light from TC's kit and glued that in place over the hole, so simply screwing in the switch and poking the led up into the hatlight, and then feeding the wires along the channel of the outer barrel and taped in place ready for the grip to be screwed in on top.

Once the main electronics were installed I did a little test run to make sure everything was working ( i had done a quick test before I installed everything with a 9v battery, but I wanted to make sure nothing had been managed from any man handling)
https://vimeo.com/559644329
tobycj, JWils23 liked this

So since I am fairly certain I have all the holes ill need drilled in the mobo I taped off the centre of the inside (forgot to take pics) and layed on the good old satin black for the final time. Painting officially done!

Once the paint had fully dried I slapped the red danger label on and sorted out the foam at the top of the mobo. I ended up getting some black Neoprene foam 250mmx250mmx5mm, it looks about the right thickness and width-wise, it lines up just right.

For simplicity, I glued the foam roughly the correct distance from the top, weighed down by some paper weights to make sure the edges were stuck down tight. Once it had set I cut along the contour of the top of the mobo with a small Stanley blade. Hey presto. 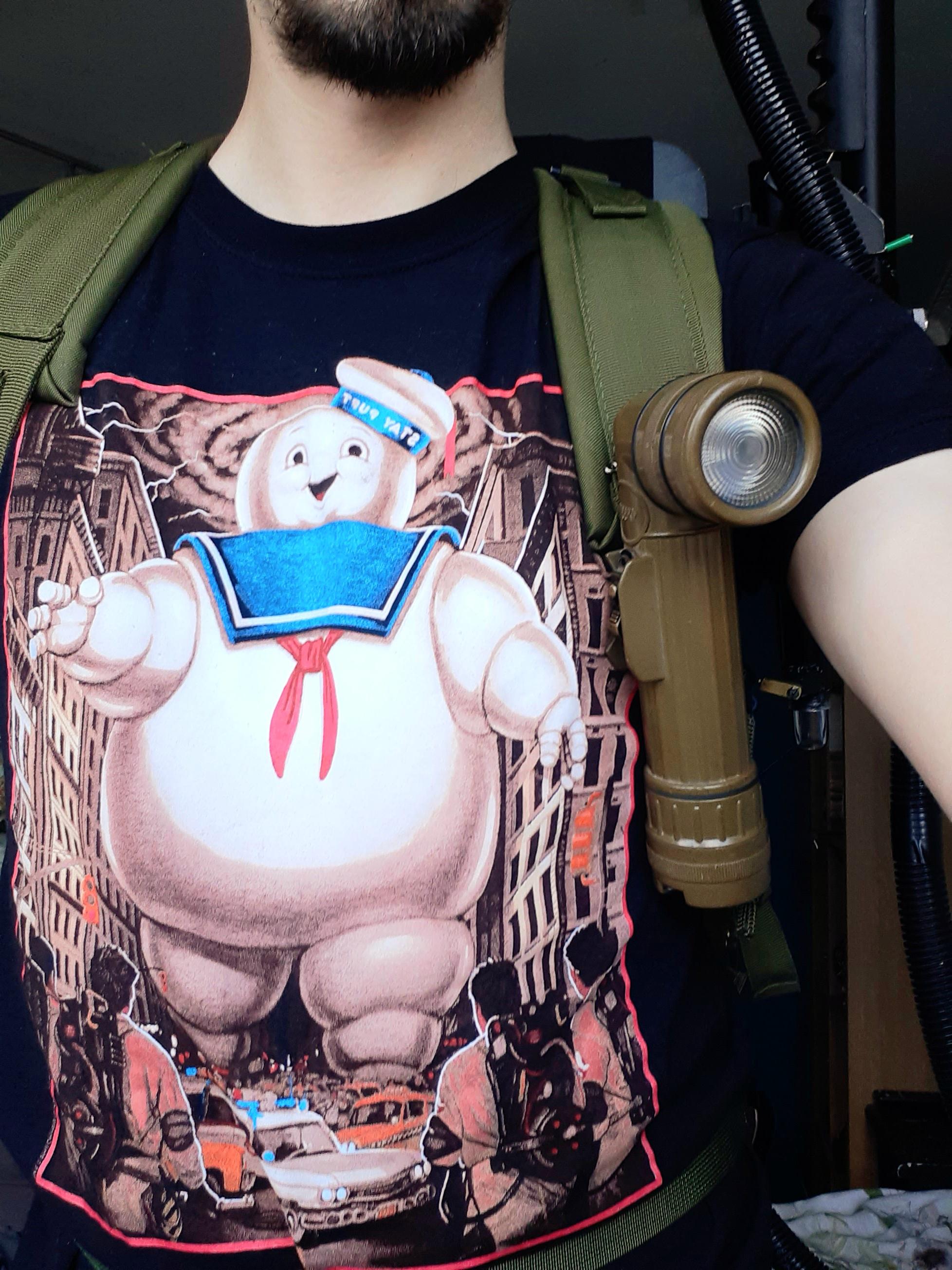 I had it marked up and drilled a small dimple for the set screw to sit into in no time. However; as the slotted hex bolts I have for my banjoes are metric they don't fit the thread on the trigger tip. If anyone can let me know what size thread I need for a new banjo bolt to fit the gbfans trigger tip it would be greatly appreciated!

They look like they have the right style of head, hopefully they are long enough but that info isn't given. I've ordered them and I'll let you guys know! If they are the right size I'll have plenty spare if anyone would be wanting any so let me know.

Until they arrive I managed to bodge the smaller bolt I have to fit a bit more snug in the thread by wrapping a layer of electrical tape around it. Just as a placeholder so I can put the rest of the barrel together for now.

So that is the externals of the pack completely finished now! Just need my pop catches and sound and lights. Hopefully I'll be done in time for Halloween.

So those bolts I ordered came in very quick. However they only just pass through the banjo length wise so it only hangs on like 2 threads.

I filed down the back of the head a bit to give more length in the bolt and it seems to have enough bite to hold the banjo on.

If needs be, I can always file more off the back of the bolt head so the thread has more grip if it becomes a problem.