Who You Gonna Call? The Ray Parker Jr. Story Documentary

Who You Gonna Call? The Ray Parker Jr. Story Documentary#4955770

September 26 at 2 pm at Emagine Birmingham 8.

mrmichaelt wrote: ↑September 19th, 2021, 6:30 am U.S. premiere of Ray Parker Jr.'s documentary will be at the Freep Film Festival in Detroit.

September 26 at 2 pm at Emagine Birmingham 8.

Several local Ghostbusters will be there from various teams.

mrmichaelt liked this
"Ok. opening at number 2, to sub 50 million, next to the 2nd weekend of an animated kids movie, is NEGATIVE. Let me just clear that up right now. There is no middle ground on this. Studios DO NOT spend 100 million in marketing money to open at number 2. No sir. No. No. No. No." - Richardless

Tonight all the local franchises were on hand for the premier of the new Ray Parker Jr. documentary.

We had an absolute blast of course, and the man was more than happy to sign autographs and take pictures.

We were shown a brand new (and fully finished) Ray Parker Jr Ghostbusters music video that was made about 3-ish years ago right before Afterlife was given the green light.*

We asked "How come this was never released? This is amazing."

The answer we got was that Sony was good to go until the new movie was greenlit and that they didn't want to "confuse" the public.

Before we could ask for more details a PR person interrupted us sadly.

But neat to think about, and hopefully one day the new music video sees the light of day.

*to clarify the music video was not part of the documentary.

Love his signature on my Steelbook: 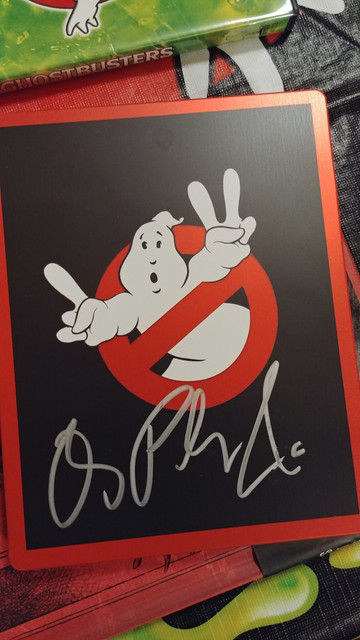 I think that Winston being a successful business[…]

I always felt this sort of thing would be good for[…]