Ghostbusters II items to be auctioned by Propstore

Ghostbusters II items to be auctioned by Propstore#4970129 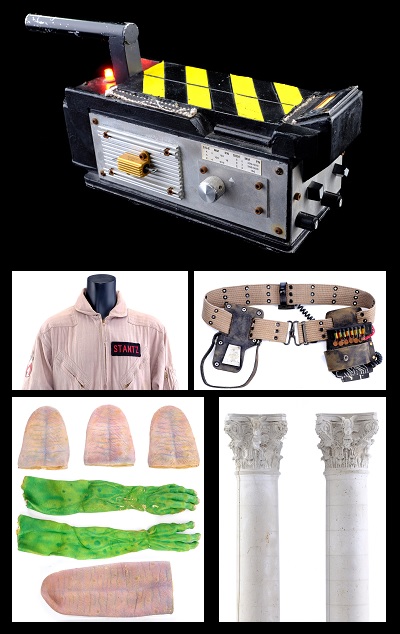 In an update to our previousarticles, the catalogue for Propstore's Entertainment Memorabilia Live Auction has gone live, revealing a small assortment of production and screen-used items from Ghostbusters II.

In addition to the fibreglass Ghost Trap prop and Ray Stantz uniform and belt that were previously-reported, additional items include tongue, glove and jaw pieces for the Slimer costumer, sections of the scale model of the Manhattan Museum of Art, and still photographs used by ILM to produce the film's special effects.

Please view the topic for detailed listing of the auction lots. The auction will take place between June 21st and June 24th.
RedSpecial liked this
Feeling overwhelmed by the Covid-19 pandemic? Please visit The Support Thread.

Re: Ghostbusters II items to be auctioned by Propstore#4970130

This ghost trap consists of a resin-cast body that is adorned with aluminum plates,a handle and four practical wheels, a red plastic light fixture, a V clip at the bottom for mounting to the belt, a flippable switch on the top and a series of dummy switches and knobs on the sides. It is affixed on the top with two yellow striped pieces of caution tape as well as three smaller sections of fabric. These smaller pieces of fabric were soaked with a chemical which caused the trap to appear as though it was smoking; ghost traps were seen smoking at various points in the film. One of the switches activates a flashing red light by the handle while a rectangular bar-graph yellow light on the top of the trap also illuminates. It exhibits some paint chipping and wear on the decals throughout. Dimensions: 20" x 6" x 6" (51 cm x 15.25 cm x 15.25 cm)
Estimate: $50,000 - $70,000

Conceived by costume designer Gloria Gresham, this Flight Suits Ltd. jumpsuit is made of tan polycotton with a metal zip front, two breast pockets, two hip pockets, a pocket on the left arm, two thigh and shin pockets on each leg, a thin pouch on the left inner thigh, and four pen slots by the ankle. The waist and wrist cuffs are adjustable with fastening strips, and the ankle cuffs are adjustable with metal zips.

The jumpsuit also features Stantz's signature name patch in red text on a black background sewn onto the left breast, and a replica Ghostbusters logo patch added onto the right upper arm to complete the costume. "Dan Aykroyd" is hand-marked on the interior tag, and the collar is hand-marked "AYKROYD 1." The jumpsuit exhibits some staining and discoloration throughout.
Estimate: $20,000 - $30,000

This beige cotton belt, labeled "DA" on the interior, features a metal clasp, a metal plate holster with a leather strap, and a second leather holster containing a plastic and foam rubber electronic greeblie addition with various wires attached to a metal clip. The belt exhibits wear on its holsters.
Estimate: $5,000 - 7,000

139. Slimer's Jaw GHOSTBUSTERS II (1989)
Slimer's jaw from Ivan Reitman's sci-fi comedy Ghostbusters. Slimer, a glutinous green ghost haunted the Sedgewick Hotel and was the first ghost that the Ghostbusters ever caught. He quickly became a fan-favorite in the franchise. This heavily detailed mold of Slimer's jaw, likely built for one of the film's practical maquettes, features pink rubber gums inset with 13 jagged resin teeth painted white. One of the front teeth is broken, and it exhibits various scuffs to the paint from production use. Dimensions: 27" x 21" x 11" (68.75 cm x 53.5 cm x 28 cm)
Estimate: $10,000 - 15,000

771. Pair of Museum Model Miniature Columns GHOSTBUSTERS II (1989)
A pair of columns from a museum model miniature from Ivan Reitman's supernatural comedy sequel Ghostbusters II. In the film's finale, the Ghostbusters brought the Statue of Liberty to life to break through the roof of the slime-covered museum and defeat Vigo the Carpathian (Wilhelm von Homburg).

These two columns are constructed of plaster over wood cores with a detailed front side and an unfinished backside revealing the wood. The front of each column includes lines along the shaft simulating the divides of stacked stone blocks, a decorative base, and an elaborately sculpted capital. The columns exhibit scuffs, cracks, and previous repairs leaving glue marks. Dimensions: (each) 24.5" x 4" x 2.5"
Estimate: $3,000 - $5,000

This lot contains two black-and-white plastic cels: one labeled "23" with Peter Venkman (Bill Murray) and Louis Tully (Rick Moranis) in the courtroom, and another labeled "72" with Venkman and Egon Spengler (Harold Ramis). Both exhibit some bent corners and light creasing from production and handling. Dimensions (each): 16.75" x 13.75" (42.75 cm x 35 cm)
Estimate: $400 - $600
RedSpecial liked this
Feeling overwhelmed by the Covid-19 pandemic? Please visit The Support Thread.

Re: Ghostbusters II items to be auctioned by Propstore#4970879

Re: Ghostbusters II items to be auctioned by Propstore#4970909

I don't think they'll be filming there. The white […]

I used canpara, bishop don miguel, mburkit and a f[…]

I've been trying to figure out which size of soc[…]