How did they get away with that? (Professor Moriarty)

Side note: I think it's a much better Winston-centered episode than "Boo-Dunit" from the Syndicated Season.

Vahan wrote: ↑August 15th, 2022, 5:00 pm In "Elementary My Dear Winston", it begins with the bare Skeleton of Professor Moriarty emerging from the waters, threatening to the rip the lungs out of an elderly couple. How did ABC get away with that? Quite amazing to me.

I think it was approved because it was a fictional character made manifest. If the story entailed the ghost of the actual Moriarty then ABC would have objected.

Or When Pete asks a random female in The Cabinet of Calamari "How's Tricks?"

Or the skeletons with real revolvers in a Janine centric episode I can't remember the name of.

There's tons of how'd they get away with thats.

By timeware -  August 16th, 2022, 3:06 pm
-  August 16th, 2022, 3:06 pm#4971905
Animation companies have been getting away with slipping in that kind of stuff for years. Disney is notorious for hidden easter eggs, and adult related materials etc, etc. I think it's a fan edit but there's a video of a clone wars battle droid saying the F-Word but you don't catch what he's saying until it's slowed down. Obviously i'm not posting the you tube video but it's an easy find.

What about the Al Capone episode, though, from the same season? He was a real person.

What about the Al Capone episode, though, from the same season? He was a real person.

Probably something JMS bartered for when he was asked to return to the series.

Or When Pete asks a random female in The Cabinet of Calamari "How's Tricks?"

Or the skeletons with real revolvers in a Janine centric episode I can't remember the name of.

There's tons of how'd they get away with thats.

Another instance is the episode The Devil of the Deep where Janine is in a bikini for the whole episode.

Also a joke that when I first heard it thought it was talking about incest in the episode Chicken he clucked. Egon says about Cubby, "Definitely evolved from the shallow end of the gene pool."

And the perky Tahitian titties flaunted in "The Devil to Pay": 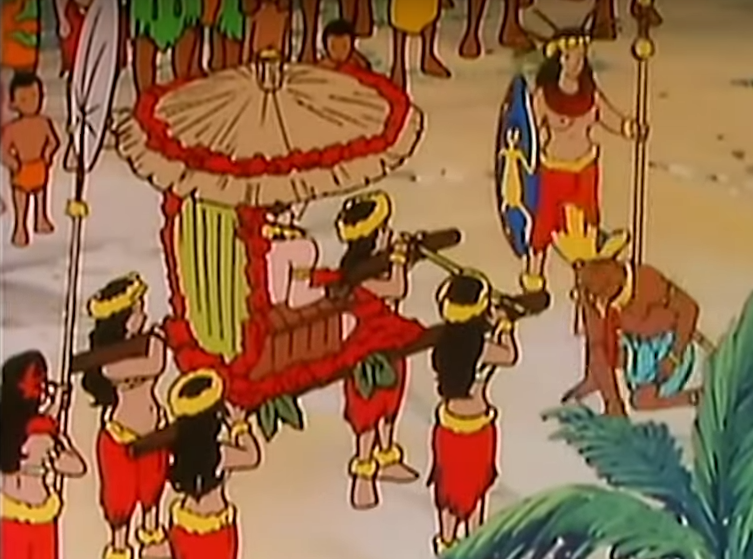 timeware wrote: ↑August 15th, 2022, 9:08 pm It's the eighties so rules were pretty lax back then. I'm sure there were re runs of the Tom and Jerry show around that time.

This is not true at all. If anything it’s the opposite. If a show aired on ABC that means they went through the S&P department and they would suck the life out of anything. The internet is full of insane BS&P requests for changes for the most minute things. And even some where you have to wonder how twisted the mind of the censor was. I think JMS has specifically posted about some of these problems.

1980s kids tv was sanitary, safe & not at all even remotely controversial. This started to change a bit in the 1990s when Cartoon Network started airing their own shows and & since cable isn’t censored like broadcast networks.

You want to hear BS&P war stories? The guys from the 1990s Batman show went through hell with them. It’s amazing that show was able to get away with all that it did. Batman was one of the few shows to have villains using actual bullets & real looking guns. Other shows couldn’t have that which is why most cartoons from the 80s and early 90s have laser weapons.

Chances are if something remotely controversial aired then it was probably pared down from an original that was much worse. Sometimes producers would purposefully take things pretty far that they knew BS&P would demand changed just so that that even if it appeared grotesque or scary, the original design might’ve been even worse.
Kingpin liked this

Hello group, I am new to collecting ghostbuster co[…]

Thanks for the info, ZedR! :cool: I decided tha[…]

Thank you! Roger that! I will be happy to share m[…]